READER’S REACTION: What our readers think of TAG Heuer (and our Editor-in-Chief!)

READER’S REACTION: What our readers think of TAG Heuer (and our Editor-in-Chief!)

Last month, Europa Star’s Editor-in-Chief Pierre Maillard spoke to Claude Biver and Guy Sémon of LVMH. The interview was featured in the March 2015 issue of Europa Star Magazine. Following the publication of the piece online, we received some reactions from our colleagues in the watch world. One of those reactions came from across the Atlantic, from Fabio Anderaos de Araujo, Editor of The Mechanical Watch.

We like a good debate here at Europa Star, so we thought to share Mr. de Araujo’s thoughts with the rest of you (with his permission, of course). Below you see how they square off: You will find the initial article by our main man, and immediately following that is the reaction.

I feel excited to be here; I never planned to take on any responsibilities at the age of 66,” declares Jean-Claude Biver by way of introduction. Not long after he was handed the keys of TAG Heuer he invited some journalists to a meeting over one of his famous cheese platters. “But I’m only here temporarily. I’ll leave when TAG is making 2 billion Swiss francs per year… No, I’m joking!” (Today TAG Heuer is approaching an annual turnover of one billion.)

He has his triumvirate gathered around him: Guy Sémon, general manager for sales, production, R&D and industrial development, CFO Michel Moussellon and Philippe Rudolf, head of HR. The team predates him, but they were short of a helmsman, which is how he defines the task that lies ahead – a task he sums up as “implementing an ambitious strategy of conquest.”

So which territories does he hope to conquer? “There are some amazing opportunities in the CHF 1,500–5,000 segment. It’s a huge vein to tap into.”

But how does he explain this strategic U-turn, after a decade of upward mobility and advanced technical innovations? There is almost certainly a need for greater complementarity between LVMH’s watchmaking brands, with Hublot at the top of the pyramid, then Zenith, and, lower down price-wise, TAG Heuer.

Then there is the market reality. While TAG Heuer’s innovations in escapements, allowing for measurement to 1/100 of a second, even 1/1000, and the V4 have been much in the headlines, the fact remains that 60% of TAG Heuer’s sales are of quartz watches. 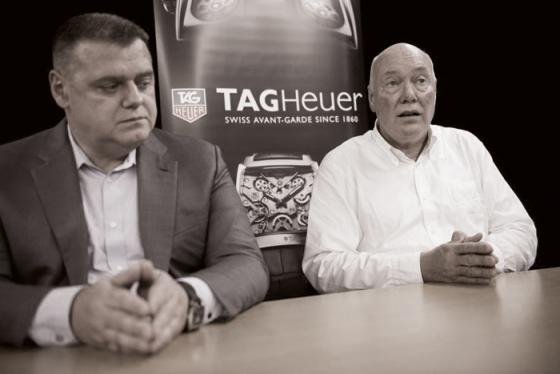 “TAG Heuer was very marketing-focused,” explains Guy Sémon. “We were looking for watchmaking legitimacy, but on our own terms, we didn’t want to just reinterpret classic complications, we wanted to innovate. That helped us to understand what watches were all about, but TAG Heuer is a high-volume brand, and our average price is CHF 3,000. We will therefore be building on these innovations, transforming them into accessible products for the general public. Our innovations will come down from Mount Olympus and rub shoulders with our commercial products.”

The burning question is: what role does the expected rise of the smart watch play in this new strategy?

“I confess, I’ve changed my mind. Ten months ago I didn’t believe in them at all, but now I’m sure, we’re going to see a tsunami: a tsunami on Lake Neuchâtel!” But, as Guy Sémon notes, “If a company like Apple is investing billions in R&D, it’s because something is going to happen. So we either sit back and wait and see what happens, or we react. We decided to react. If a consumer has CHF 1,000 to spend, he will have a choice between a Swiss made quartz watch or a smart watch. Do you think he’ll continue to buy quartz?”

But don’t worry, “All is not lost,” points out Jean-Claude Biver. “It’s not so clear-cut. Swiss watchmaking is also an image, it’s prestige, soul, emotion, and it’s sexy. And what’s more, this watchmaking fibre, this authenticity, can be applied to the smart watch. We have loads of ideas, but we will not bring out any new product until it is completely ready.”

Guy Sémon offers a clue: “We are fully aware of one important aspect: the obsolescence of electronics. We are therefore working on the concept of forwards compatibility. We are also looking very hard at the issue of autonomy. But, as you know, a watch is a device of limited dimensions, that tells the time. And the technology has to fit inside this limited size. Batteries take up a lot of room: you could say that watchmaking today is facing a genuine housing crisis.”

I would like to make a few comments about the recent interview with Jean-Claude Biver and Guy Sémon of LVMH/Watches and Jewellery.

First, I believe there is an excess of both watch brands and models in the market. The market is oversupplied, like the automobile industry.

The public is bombarded daily with new models and new brands. These are problems faced by several business segments.

Second, watches are becoming too similar with each other. Few watch brands have a real identity.

In the case of TAG Heuer, the brand is recognized by its high quality chronograph watches; as it is the case also for Breitling.

But TAG Heuer, in my humble opinion, has an excess of calibres, which confuses the consumer, even the most watchful.

The Luxemburgish Jean-Claude Biver exaggerates when he says" we’re going to see a tsunami: a tsunami on Lake Neuchâtel!” due to both the advent of smartwatches and because Apple is investing billions in R&D (Research & Development). Apple invests billions in R&D because this is fundamental for its survival.

He, Mr Biver, is underestimating people’s perceptions and tastes. The analogue and mechanical watch, besides its appeal, is also a factor of differentiation, which does not have the same impact when somebody uses a smartwatch.

The traditional horlogerie operating in the mass production market segment simply has more one competitor, albeit a big competitor.

With whom do you agree? What do you think about the quantity and quality of what is out on the watch market today? Do we still have to continue to take Apple seriously in the watch world?

And for more insights on the watch industry direct from its HQ in Brazil, be sure to check out: www.themechanicalwatch.com