All smartwatches on the wrist


Direct from the massive IFA trade show in Berlin, Europa Star reviews almost every connected watch imaginable. Which one was the stand-out performer?

All smartwatches on the wrist

Direct from the massive IFA trade show in Berlin, Europa Star reviews almost every connected watch imaginable. Which one was the stand-out performer?

IFA Berlin is one of the biggest electronic and digital trade shows in the world with the CES Las Vegas or COMPUTEX TAIPEI.

Between drones and dishwashers, smartwatches were to be found in the alleys of this giant fair. Europa Star was there too. Challenge: wear all the smartwatches presented. Let’s start the visual tour!

First stop, TomTom, which presented their GPS watch TomTom Spark 3, with a fast-removable strap and an out centered control system, in order to better monitor heart rates. Quite low autonomy on it, but a very sporty watch in the price segment of 100-300 euros.

Their arch nemesis Garmin was just around the corner with a very different proposition. Indeed with their Garmin Fenix Chronos they are trying, like other smartwatch producers (check out Samsung later on), to get closer to the look of a “real watch”. A higher-end model, hence, with a wide range of options, materials and a higher price range (count on spending 1000 euros or more) which will be sold in the traditional watch retail network, not in outdoor shops! 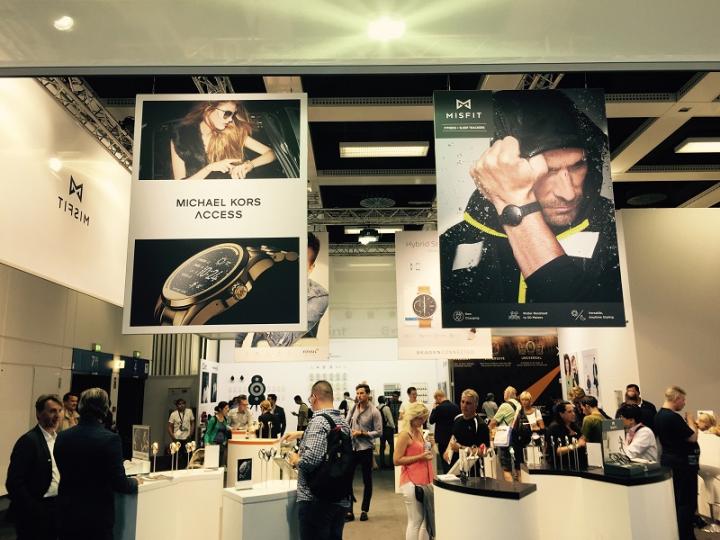 Another navigation system specialist, German Becker, proposed their own interpretation of the smartwatch with the Tiger at 150 euros.

Now let’s move to traditional watchmaker Fossil Group, the 4th largest in the world (well, if you exclude Apple of the ranking), which has the ambition of going fully connected within the next 3 years after their buyout of tracking device specialist Misfit Wearables (and all of their know-how) last year. They operate their own brands but also a wide range of famous names under licensing. 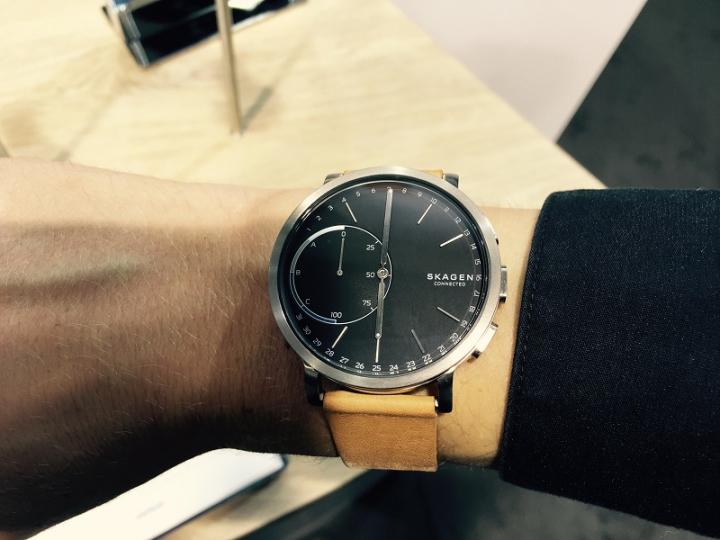 Is Skagen trying to channel the spirit of Frédérique Constant in its latest connected watch?

They propose a wide range of connecting options, from the very low-profile and sober Skagen Connected, an hybrid watch which has a connected hands system to display performance (reminding us of the Horological Smartwatch by Frédérique Constant), to the next generation of the Q connected lines of Fossil and the Access by Michael Kors... Now we’re waiting for others among it’s portfolio brands to get connected!

Here is our favourite, though: the Withings Steel HR, the purest and most beautiful of all (in our view) resembling less like a gadget and more like a carefully designed watch, with hands and also a tiny digital screen. An elegant proposition for less than 200 euros, with a 25 days-power reserve, which almost approaches the master of minimalistic style Nomos Glashütte. This year, Nokia has made a good bet by buying the French brand. 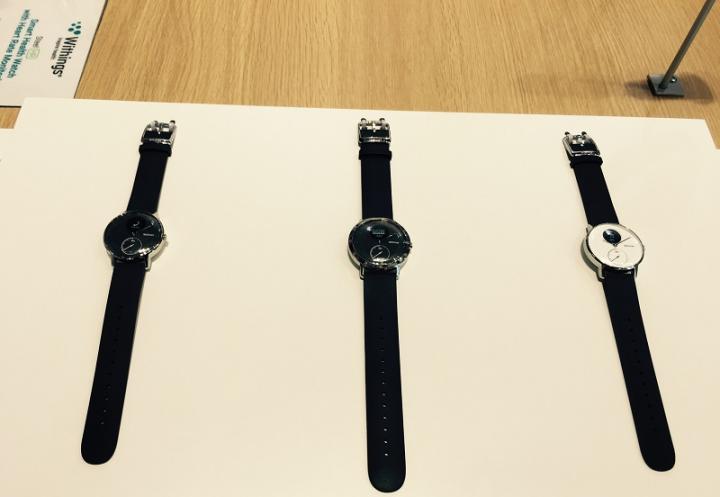 Withings shows us that smart can look good

Fast-growing activity tracker leader Fitbit, a serious challenger to Apple Watch, was there with its best-seller smartwatch, the Blaze, a 5-days “power reserve” 220 euros-priced model, with 14 strap options.

Some digital brands specialize in niche markets, like Trackimo with their simple watches to keep in touch with your kids. Or Tractive with GPS collars for your... dogs (we didn’t test this one first hand...)! 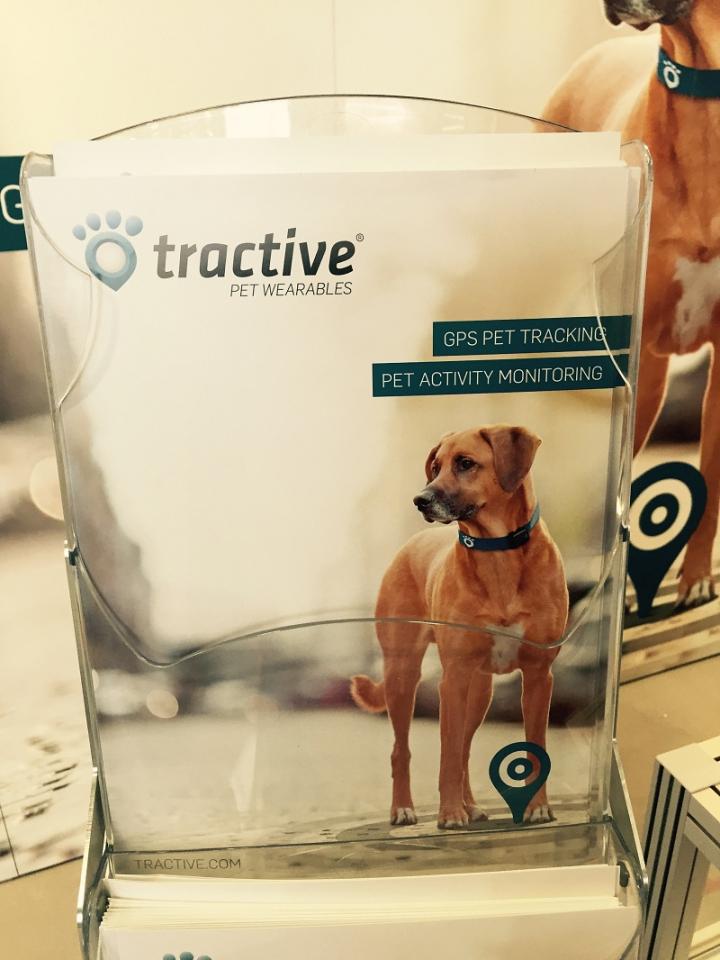 Just in case your dog isn’t smart enough, Tractive has you covered

Back to the giants. The star of the show is Samsung Mobile, which occupies a hall on its own. It presents the Gear S3, designed by creative Swiss watchmaker Yvan Arpa! The challenge was indeed to get closer and closer to the look of a real watch. There is an interesting bezel rotation system to control the dial. Two designs are proposed: the Classic and the Frontier, which features thinner pushers in order to be more manageable outdoors, for instance when wearing gloves. 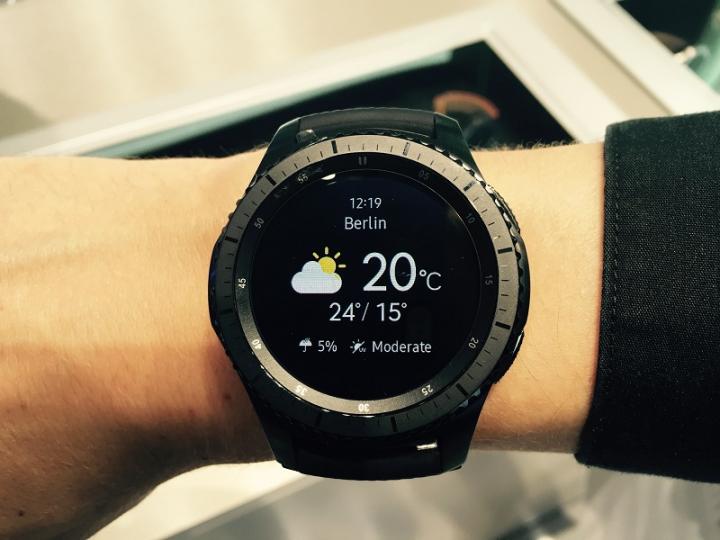 Lenovo Motorola was there but did not display any of their smartwatches, to the despair of their hostesses who repeatedly got the same question: “Where is the Moto 360”?

Neither did LG Mobile, which showed dishwashers and washing machines among many novelties but no smartwatch... Explanation given: the latest model was presented at Las Vegas.

Sony did not expose any of their smartwatch collection but did present a quite incredible connected watch conceived by their lab Seed Acceleration Program: the FES Watch made of... e-paper!

TCL / Alcatel mobile proposes a smartwatch whose colourful design and wide variety of models reminds us somewhat of a connected Swatch. This “wifi watch” is baptised “Move your Time”.

Philips has chosen the high-potential segment of e-health with its Health Watch that is presented as the only “validated” one by doctors. The Dutch brand also introduces fall detectors for elderly people. After all, they could end up as the prime users of connected devices, with a life-or-death implication which differs from the more playful applications proposed... 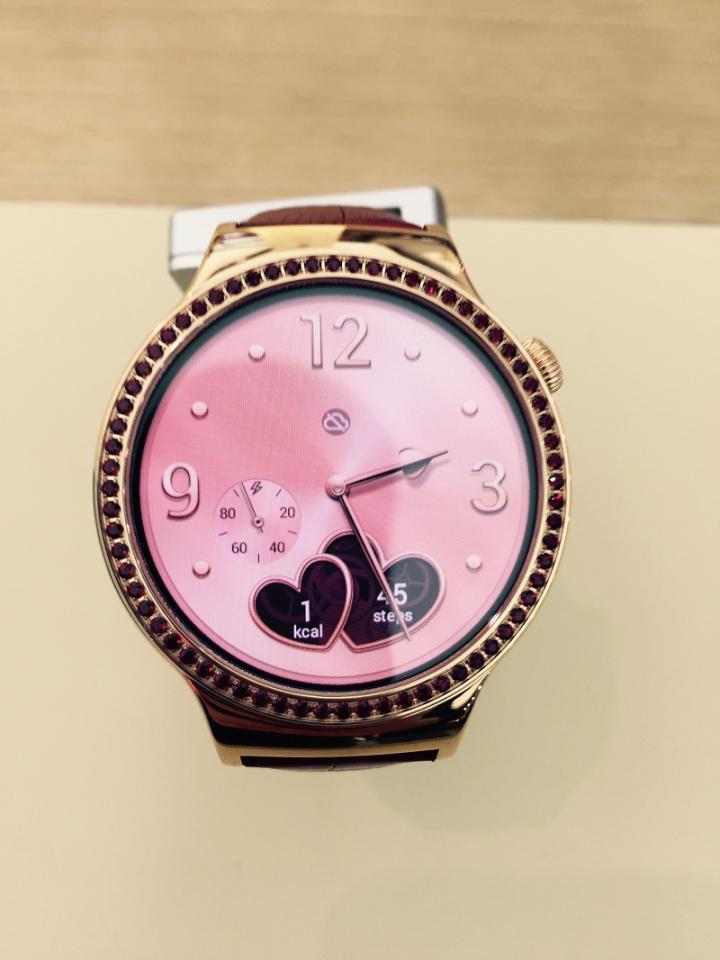 Chinese giant Huawei Mobile is focused on connecting the ladies

As for Huawei Mobile, they focus on ladies’ connected watches this year with Swarovski crystal ornamented pieces, named Elegant, Jewel or Topaz, in the 500-700 euros price segment.

Last but not least, serious challenger ASUS presents its ZenWatch 3, with a round case instead of the former squared one. Always with the aim of resembling a “real” watch, at a price of 200 euros.

Panasonic does not display connected watches but it is possible to get a nice beard cut with the brand’s blades on their booth or going to the hairdresser!

Two big players were not there: Apple Watch of course and... TAG Heuer.

All in all, the challenge with this segment, which was not a main focus at the IFA (the exception being Samsung) remains the utility one, combined with an obsolescence that is little appealing compared to the price offered on the higher-end models. Design wise, there also seems to be less manoeuvre for creativity and it is sometimes quite hard to distinguish one from the other. The dominance of Android favours this uniformity.

However it will eventually be up to the customers to decide on the fate of this segment. So how do you like them? Which one is your favourite?

Europa Star will devote a market analysis to this new segment in its December-January issue.