Worldtimer and the snob


Browsing on the internet I came across a blog by ‘Watch Snob’ on which a potential buyer wrote that he knew nothing about watches but was interested in a Reign RN1506 Worldtimer. He asked if it was any good and whether or not it had a Swiss movement.

Worldtimer and the snob

Browsing on the internet I came across a blog by ‘Watch Snob’ on which a potential buyer wrote that he knew nothing about watches but was interested in a Reign RN1506 Worldtimer. He asked if it was any good and whether or not it had a Swiss movement.
I

n my opinion, for what its worth, the Watch Snob, an erudite gentleman of unknown origins with a distinctive British usage of language and some vague uncorroborated yankee doodle dandy attachments, should have said “Why bother with a watch when you’ve got an iPhone.” But instead he wrote, ‘That’s quite an ugly wristwatch. It is cheap looking. It is probably cheaply made.’

For those of you interested, it was Louis Cottier, a watchmaker in Geneva who possibly dreamt of far-off places whilst enjoying his second bottle of wine, who had a sudden eureka moment and decided he would construct a timepiece that showed the time in different places around the world based on the known time zones. The year was 1931. And so was born the won-drous ‘Worldtimer’. But in those days aeroplanes were mainly for military purposes, although the monied adventurers were often seen in leather jackets and goggles messing about with these new-fangled flying machines.

There was no easyJet back then, so holidaymakers and intrepid travellers had to make do with long train journeys to reach one of Europe’s capitals or board a Cunard, P & O or Union Castle liner to cross the Atlantic or travel to Hong Kong or Australia. 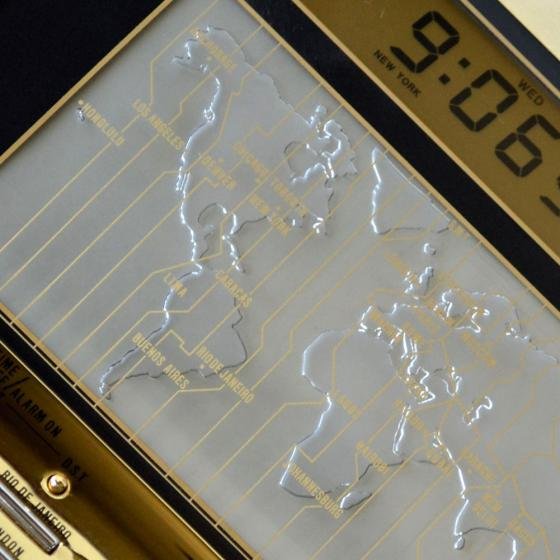 Today, travel to anywhere in the world is relatively easy and in many cases inexpensive. However, if for some bizarre reason you want to know the time in the Azores whilst sitting at home looking through your holiday brochures, the idea of a Worldtimer watch might suddenly have an appeal.

That’s when you drop your brochures on the cocker spaniel lying on your feet, open your laptop and start the search for the watch that will meet your needs. If you start with brands like Patek Philippe and Vacheron Constantin, you’ll quickly discover that you need to take out a second mortgage on your home to purchase one. But there are many less expensive and goodlooking models from brands like Omega, Breitling, Frédérique Constant, Citizen and Seiko to name but five. There’s also a Corum model that has nautical flags as hour markers in case you decide to travel by yacht. You pays your money … etc.

But be honest, how many timezones do you really need on a wristwatch – one, two, twenty-four, twenty-eight? If you are in business and you work with companies dotted around the globe you already know their local time, along with the time differences between Geneva, London, Paris, Moscow and New York. But do you really need to know the time in places such as Anchorage, Noumea, South Georgia, Denver and Salt Lake City that some Worldtimers indicate?

You’re thinking about a holiday and all you really need is local time and home time to check up on how your dog’s doing in your absence.

So what you really need is a simple dual-time watch, and for that the Rolex GMT is more than adequate and it looks great on the wrist.

But back to the Watch Snob blog. He completed his reply to the enquiry, and I quote: ‘The movement is almost certainly not Swiss, not that that matters as the Swiss will merely give you terrible quality at three or four times the price.’ So Mr Watch Snob, here’s hoping you’re now hidden away in one of those remote place names you find on a ‘terrible quality’ Swiss Worldtimer because I understand that the Swiss Secret Service (Watch Division) have circulated a ‘Wanted, Dead or Alive, Reward $10’ poster for your horological blasphemy.

That’s in addition, of course, to the hitman contract already taken out for your previous anti-Rolex comments.