By Marianne Bechtel and Serge Maillard


While Frédérique Constant is much talked about as one of the rare Swiss brands to offer smartwatches, the brand remains focused on the mechanical watch, which constitutes the vast majority of its output. It has just launched a renewed Highlife collection. Managing Director Niels Eggerding tells us about the adaptations the company has made in response to the pandemic.

By Marianne Bechtel and Serge Maillard

While Frédérique Constant is much talked about as one of the rare Swiss brands to offer smartwatches, the brand remains focused on the mechanical watch, which constitutes the vast majority of its output. It has just launched a renewed Highlife collection. Managing Director Niels Eggerding tells us about the adaptations the company has made in response to the pandemic.
F

rédérique Constant’s production oscillates between two worlds that are often placed in opposition. On the one hand, the brand founded in 1988 continues its exploration of mechanical models, which are its core business. The latest highlight of this avenue of research is the recently relaunched Highlife collection.

On the other hand, in 2020 the brand, a pioneer in the hybridisation of traditional and connected watchmaking, introduced a new smartwatch with an analogue display, the Smartwatch Vitality, with a digital dial revealed on demand. Thanks to a sensor developed by Philips Wearable Sensing, this model has heart rate monitoring capability.

Frédérique Constant’s production oscillates between two worlds that are often placed in opposition. 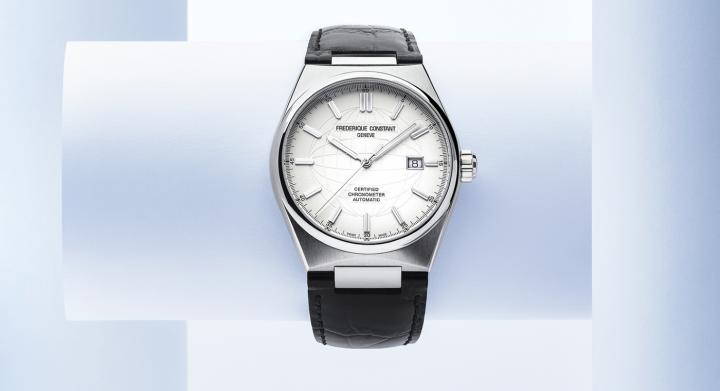 Frédérique Constant launched the first models of its Highlife collection over 20 years ago. In 2020, the brand updated and reinvigorated this historical collection by adding three new models: the Highlife Perpetual Calendar Manufacture, the Highlife Heart Beat and the Highlife Automatic COSC.

On the surface, these two categories of watch are not so very different. Frédérique Constant has chosen to be discreetly “smart”, in a way that complements the aesthetic of a traditional watch rather than distorting it. The brand’s Managing Director Niels Eggerding can feel quite lonely in this segment, given that the Swiss watch industry as a whole has turned its back on the new technologies that he believes are essential to its long-term success.

We met with him to discuss the consequences of Covid-19, the experience of teleworking and the brand’s classic and connected innovations. 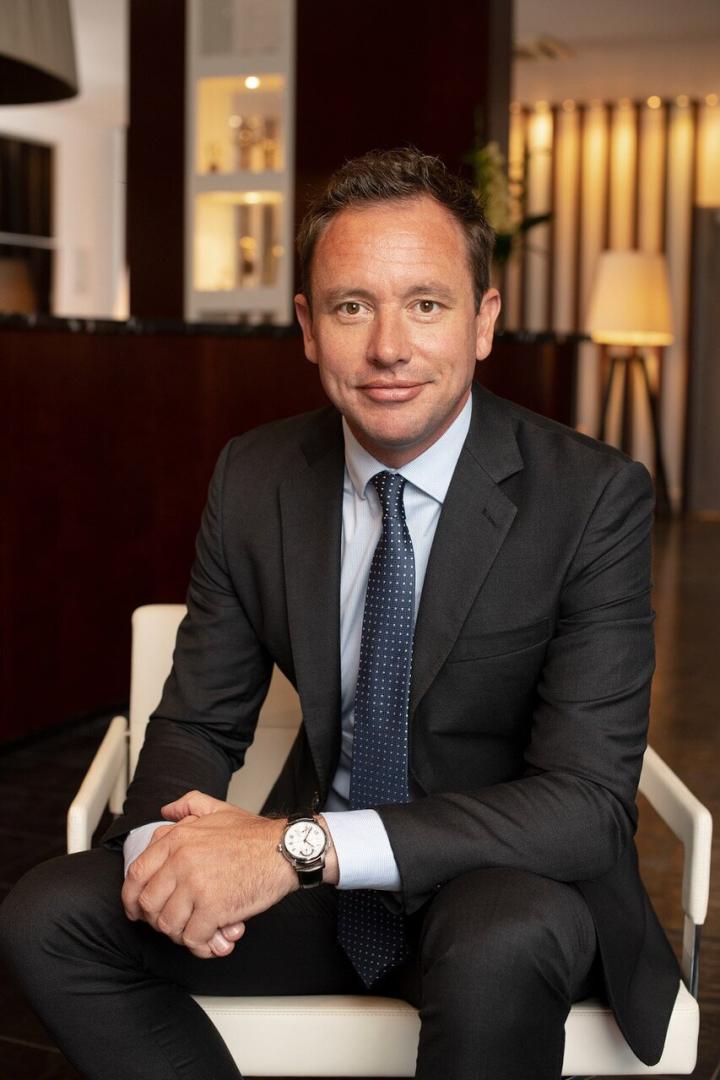 Europa Star: What immediate steps did you take in response to the pandemic?

Niels Eggerding: As early as February, given what was happening in China, we secured our subsidiaries and production lines, in order to be ready to face the next six months with relative serenity. In March, when it became clear that Europe would be impacted, we furloughed our teams in order to get through this difficult period, and from March 22nd we switched to teleworking.

However, at no time did we close the factory: I wanted us to remain reactive and I came to the office every day. Two work groups were formed: on the one hand, those who could work from home, and on the other hand, those who had to come to the workshops. Rotas were put in place so that there were as few people as possible present at the same time. 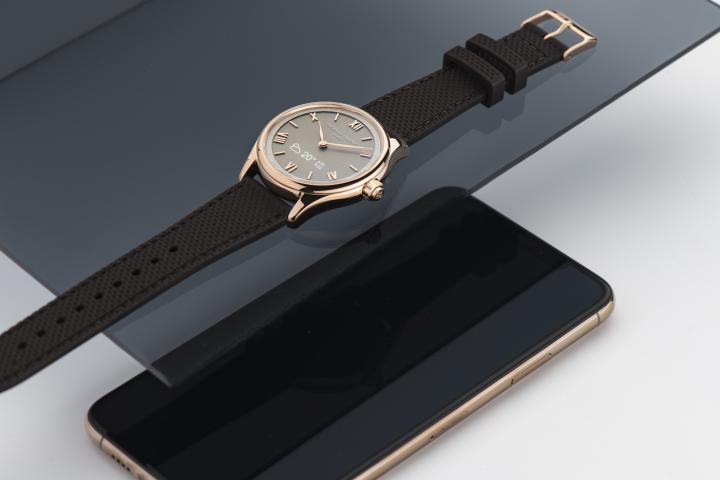 Frédérique Constant’s new connected watch, the Smartwatch Vitality, with its digital dial revealed on demand. On this new watch, heart rate is now measured on the wrist, thanks to the integration of a latest-generation sensor developed by Philips Wearable Sensing.

How was the teleworking experience?

In May, we realised that for many employees, isolation had not been beneficial. We adapted the schedules to allow a return to near-normality while respecting social distancing and the maximum number of employees permitted. Since June, everyone has returned, but only on a four-day week, from Monday to Thursday.

We have also introduced internal “traffic lanes” to prevent people from bumping into each other. Of course, masks are mandatory during meetings. What I can tell you is that everyone is happy to be back in the workshops. 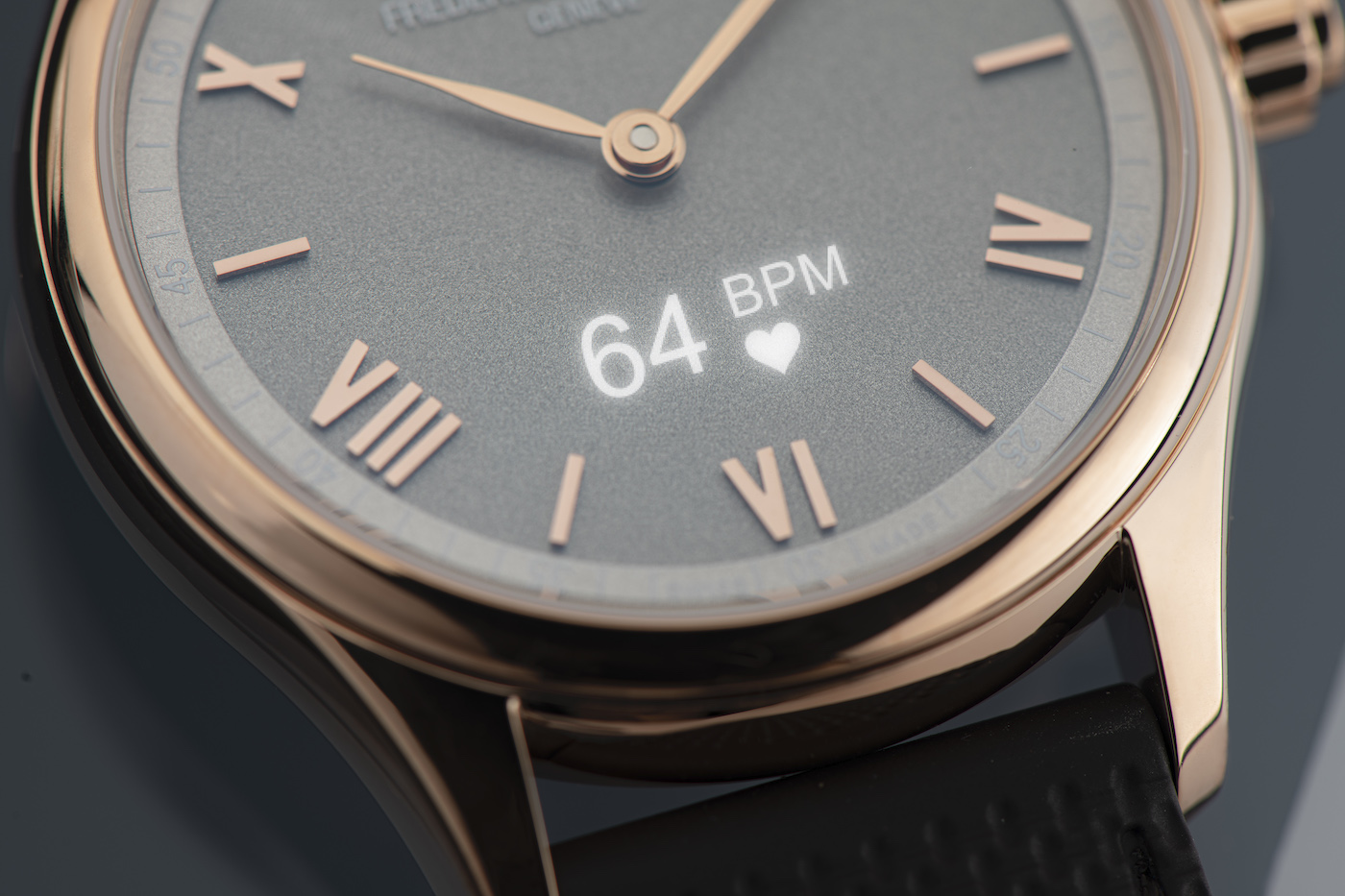 In the longer term, how will this crisis transform the way you operate and your goals?

We will have to readjust our objectives, manage subsidiaries and inventories differently and focus on “continental” rather than “intercontinental” production chains. We’ll know the real impact of the crisis in the next 12 to 18 months. We must be reactive and focus on e-commerce. In that respect, Frédérique Constant was able to achieve in three months what would normally take at least a year: we have completely revamped our website, which can now accommodate direct sales, something we have pitched as a support for our resellers.

“As far as e-commerce is concerned, we were able to achieve in three months what would normally take at least a year. But we’ll know the real impact of the crisis in the next 12 to 18 months.” 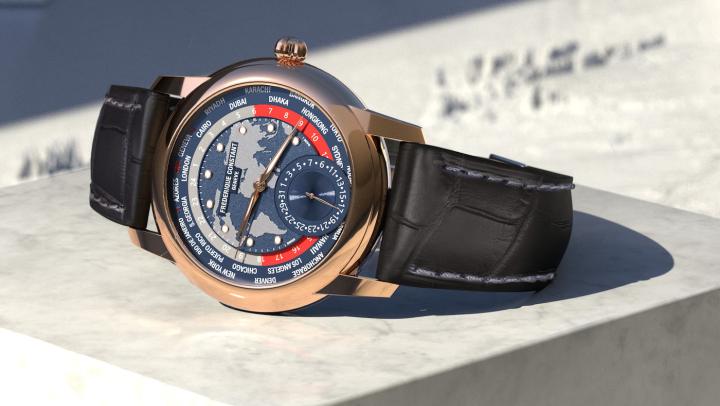 For the first time, the Classic Worldtimer Manufacture comes dressed in an 18-karat pink gold case this year, in a limited edition of 88 pieces. 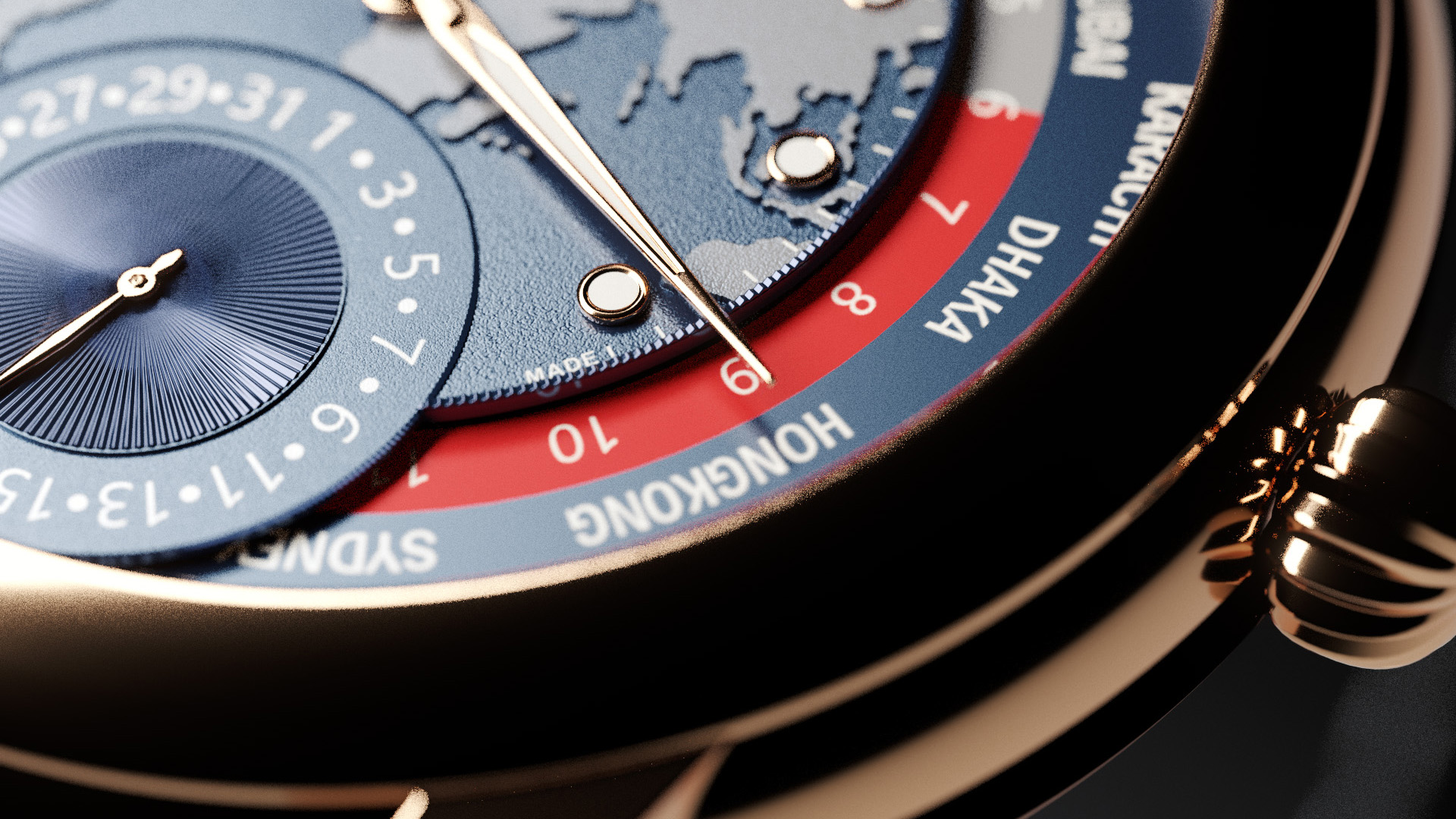 More broadly, how do you think the Swiss watch industry as a whole is going to be transformed?}

The watchmaking sector will undoubtedly be greatly impacted. Our industry has already totally disregarded the impact of smartwatches in recent years, and it is Apple that has won this battle. Today, just to talk about the crisis, I think that the groups are strong enough to absorb the shock and survive. But a lot of brands are going to go bankrupt in the next 24 months and that’s scary. Only those that are flexible and willing to reinvent themselves will survive. For the others it will be game over...

“Our industry has totally disregarded the impact of smartwatches in recent years, and Apple has won this battle.” 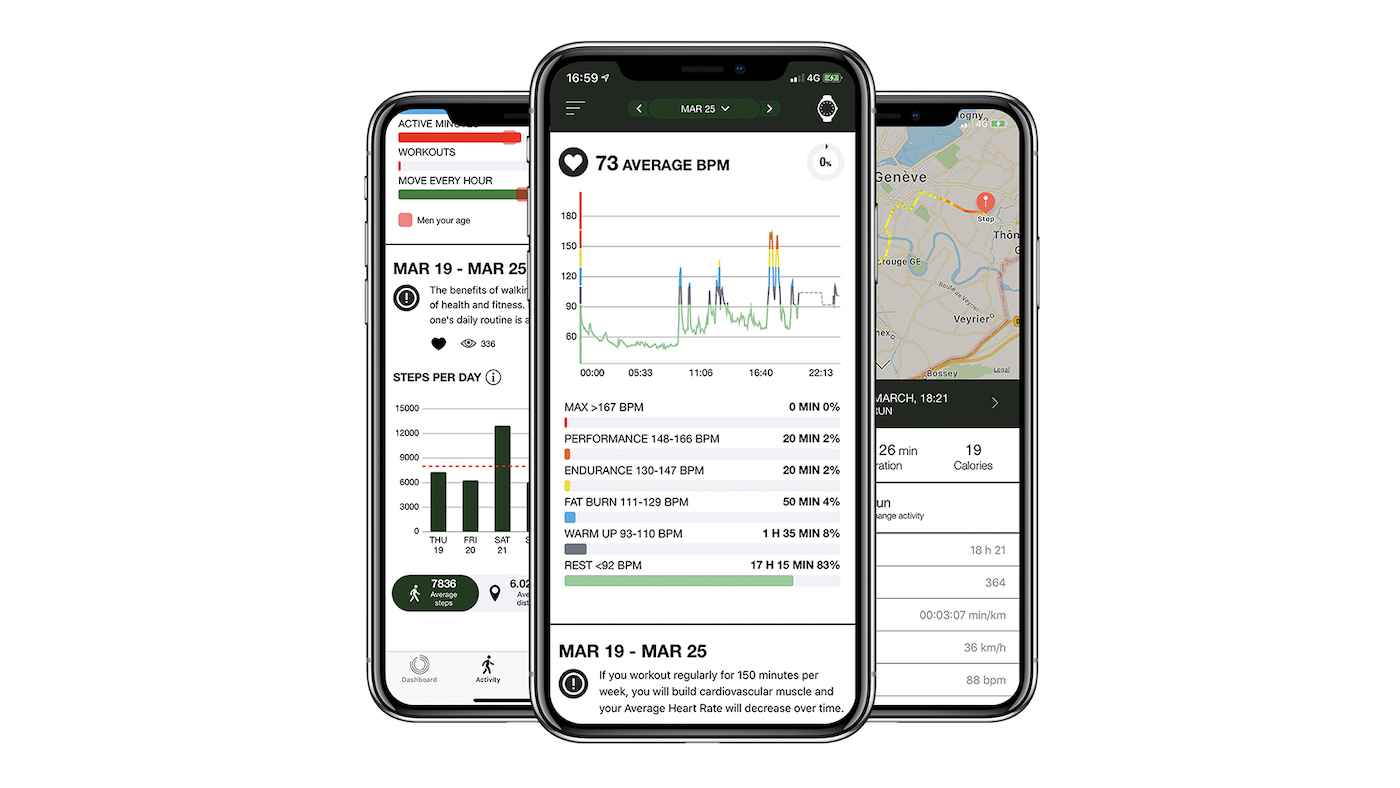 Given the new context, are you focusing on certain types of models in particular, for example more mechanical watches and less quartz?

It seems to be a fact that customers who don’t want mechanical watches are more attracted to smartwatches than quartz models. The quartz segment has unquestionably been cannibalised by smartwatches.

Including your new Smartwatch Vitality, what proportion of your output do connected models represent?

No more than 10% of total sales. Frédérique Constant is first and foremost a producer of mechanical watches. The Swiss watch industry is far from being a pioneer in the field of connection. To remain competitive and attractive, brands must rewrite their script at least every six months, whenever they launch a connected model. This technology evolves much faster than the traditional watch, and is therefore more difficult to master.

“Customers who don’t want a mechanical watch are more attracted to smartwatches than to quartz models.” 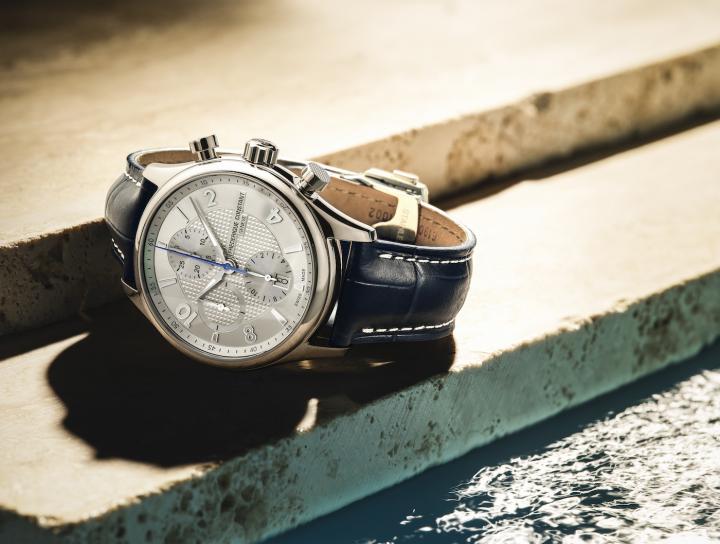 Frédérique Constant presents the Runabout RHS Chronograph Automatic model as a tribute to its collaboration with the Italian yacht company Riva.

What are you going to do in April 2021, as part of the future watchmaking event due to be held in Geneva, following the demise of Baselworld?

In this context of uncertainty, our philosophy is “wait and see”. The 2021 Motor Show has been cancelled and for Watches & Wonders nothing is really clear... Frédérique Constant is fortunate to have a magnificent factory. So what we’re leaning towards is an “open house” scenario, with drivers made available for visitors who want to discover us or get to know us better – as we wait for the storm to pass and allow a return to what we used to call “normality”. 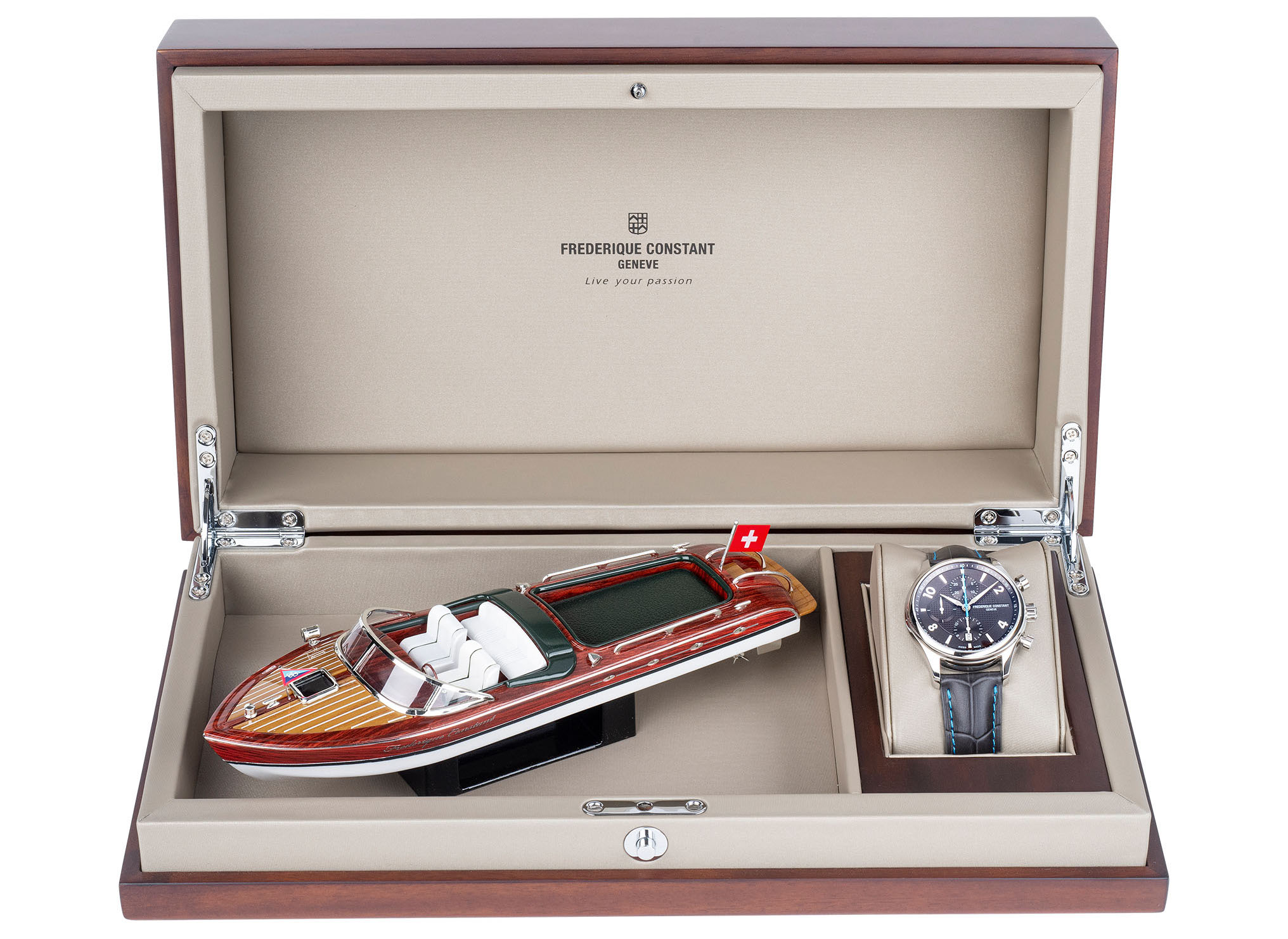