The brand that merges fluids and mechanics has been taken in hand by a new group of investors. At its head is Davide Cerrato, CEO and creative director, who has previously worked for Panerai, Tudor and Montblanc. Will HYT get back on track, exactly ten years after its creation, as other independents have managed to do recently?

The brand that merges fluids and mechanics has been taken in hand by a new group of investors. At its head is Davide Cerrato, CEO and creative director, who has previously worked for Panerai, Tudor and Montblanc. Will HYT get back on track, exactly ten years after its creation, as other independents have managed to do recently?
H

YT is celebrating its tenth anniversary this year. A decade is a drop in the bucket in the great history of watchmaking. But the “fluidic” watchmaking brand has already worn a number of distinct faces over the past decade.

It arrived on the scene in 2012 as a brand of the new generation – one that, between the revival of the mechanical watch in the 1990s and the return to conservative neo-vintage in recent years, exploded all the codes of watchmaking, in terms of both design and movement construction. In the case of HYT, this involved the use of micro-capillaries to display time with fluids. The playfulness of this application and its potential for development promised a bright future, as the collector community embraced independent brands off the beaten track. 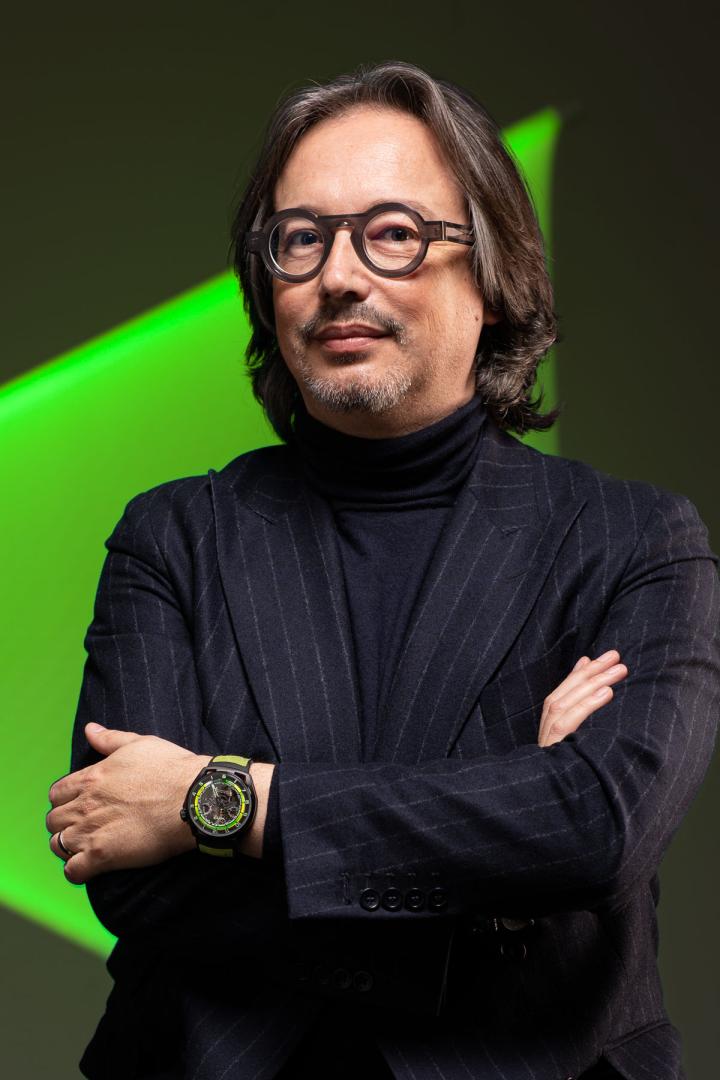 But the journey was not as smooth as expected. Perhaps if HYT had been born a decade earlier, at the height of the global watchmaking boom, it would have had time to develop before the bubble began to shrink, to the benefit of the more established names in watchmaking. But technological challenges that marred the brand’s reputation, compounded by communication issues and strategic reversals, led the brand into financial difficulties that were exacerbated by the outbreak of the pandemic, culminating in bankruptcy in 2021. 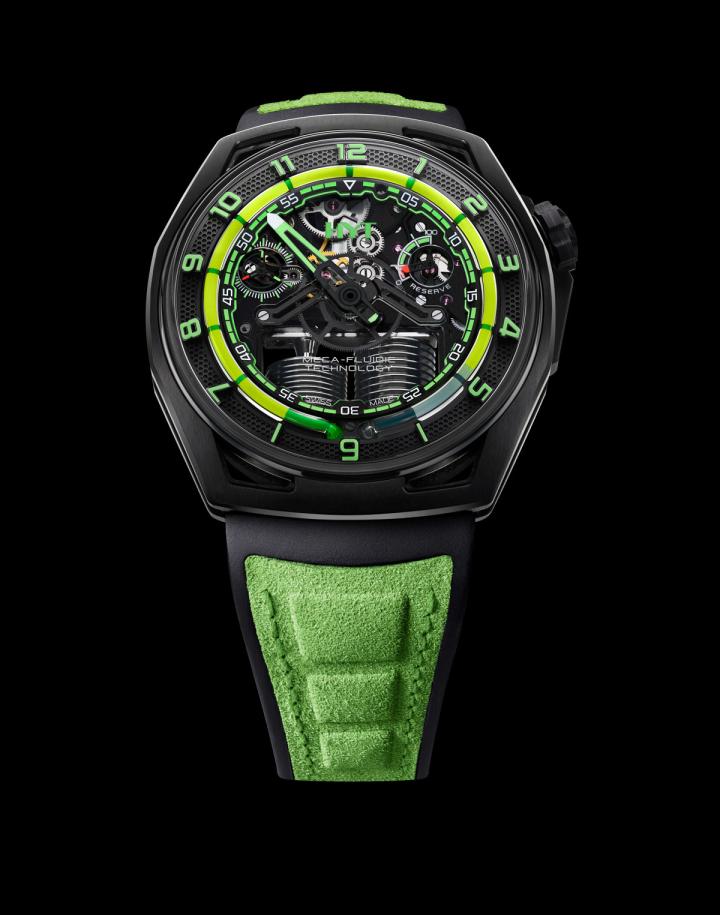 HYT’s relaunch starts with the Hastroid model. On this version, baptised “Green Nebula”, the green tone of the time indications and the fluid, accentuated by the rubber and embossed Alcantara bracelet, contrasts with the black carbon and titanium case.

However, a group of brand superfans, including former managers and new investors, quickly decided to take over the company. The head of HYT today is a high-profile industry insider, Davide Cerrato, who in the course of his watchmaking career has oscillated between XXL watchmaking (Panerai) and sporty neo-vintage (Tudor and Montblanc), the two ma- jor trends of recent decades. Other independent watchmakers who experienced difficulties over the last decade have recovered well, to the point of seeing their value rise sharply – De Bethune and Laurent Ferrier come to mind. Will HYT follow in their footsteps? We interviewed Cerrato. 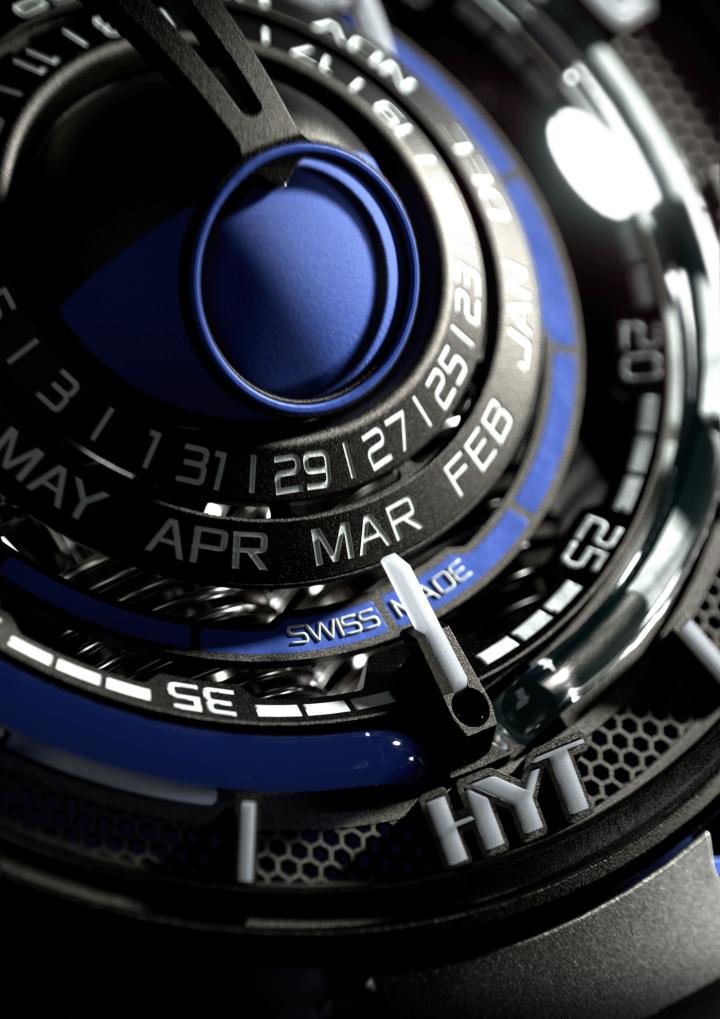 Davide Cerrato: Everything happened rather quickly. The company went bankrupt in March 2021 and by June 2021 a new structure, Kairos Technology Switzerland, had been created by a group of private investors to take over and secure the future of HYT. I myself joined the adventure on 1 July 2021, I was the first employee of the new structure! Today, we are a team of ten, with a mix of people who were already there in previous chapters of the brand’s history and new employees. It’s a combination of young, spirited watchmakers and experienced people.

What were the main steps to rebuilding the brand?

Last summer we started by rebuilding a solid network of suppliers in Switzerland. Some are historical suppliers like Arnaud Faivre’s TEC Group for the movement. Others are new partners that I brought in from my own network, such as Efteor for the cases. This has enabled us to establish new design principles that are more “horological” than before, and a new, more exclusive strategy. This resulted in the launch of the first new-generation watch, the Hastroid, and a new sales network based on twenty or so partners around the world, compared with up to sixty before. 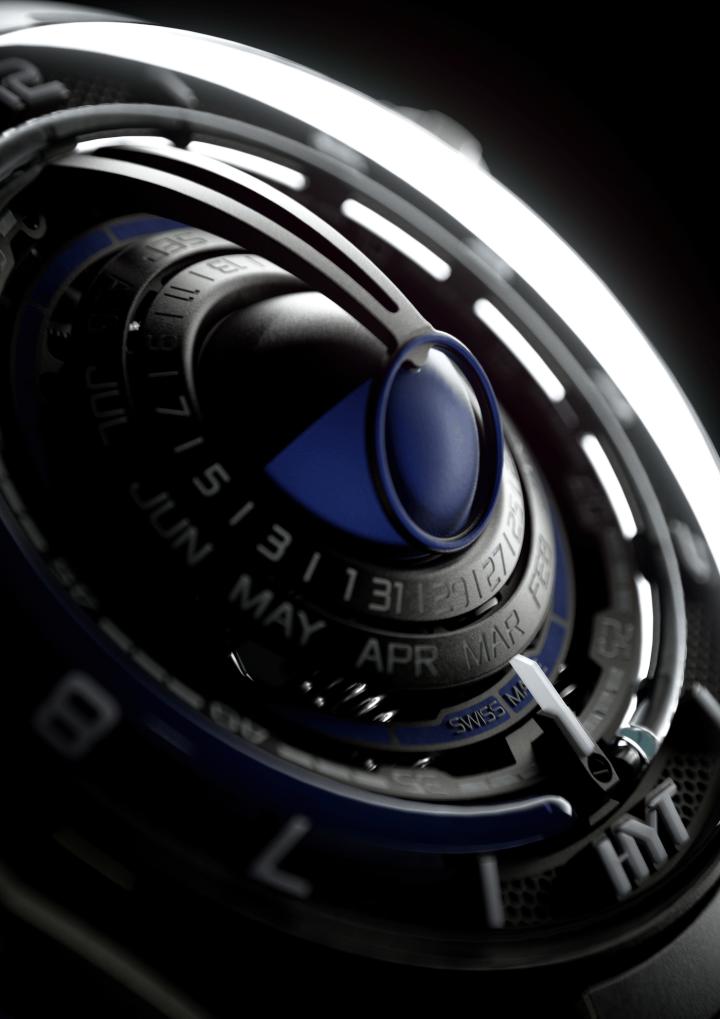 Upon arriving, I imagine you conducted an audit of what had not worked...

I went back over the whole history of HYT. The brand’s history really passed through two phases since it was founded in 2012. We are now entering the third phase. The first phase, from 2012 to 2017, saw a great deal of effort put into explaining the technology – to the extent that it may have seemed too complex. During this phase there were issues related to the stability of the technology, which undermined the success of the brand, even though the reception at its launch at Baselworld in 2012 was fantastic. It could have gone much further in exploring “fluidic complications”, as this was what all the fantasies and expectations were about. But stability issues meant that the brand remained focused solely on fluidic time reading, without developing other applications.

Then – and this was the second major step in its history – the brand reoriented itself towards the much more philosophical explanation narrative of “fluid time”. This was reflected in its design, which went completely outside the usual watchmaking codes. The brand needed to develop its sales volumes and lower its entry price to reach new, younger customers. The exercise was successful in terms of digital awareness, and we continue to reap the benefits of that today. But by trying to reach out to a new clientele, who did not necessarily have the means to buy its models, the brand distanced itself from collectors. It locked itself into a niche with little potential. And then the coronavirus arrived... 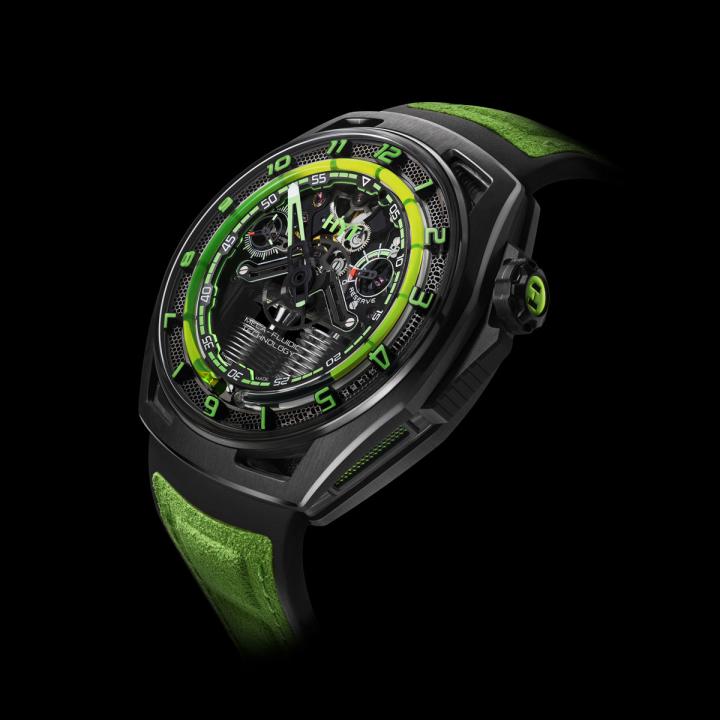 What conclusions can you draw?

We’re returning to where the brand was at the beginning, with all the fantasies and expectations it generated. The added value of HYT lies in the combination of fluid technology and watchmaking mechanics. We are adopting more horological codes, a more horological narrative, which speaks to collectors, and we are raising the value and prices of the creations (the Hastroid is priced at CHF 70,000 excl. VAT). We have adopted the theme of space exploration, celebrating these visionaries and adventurers of our time, as a way of telling HYT’s story. 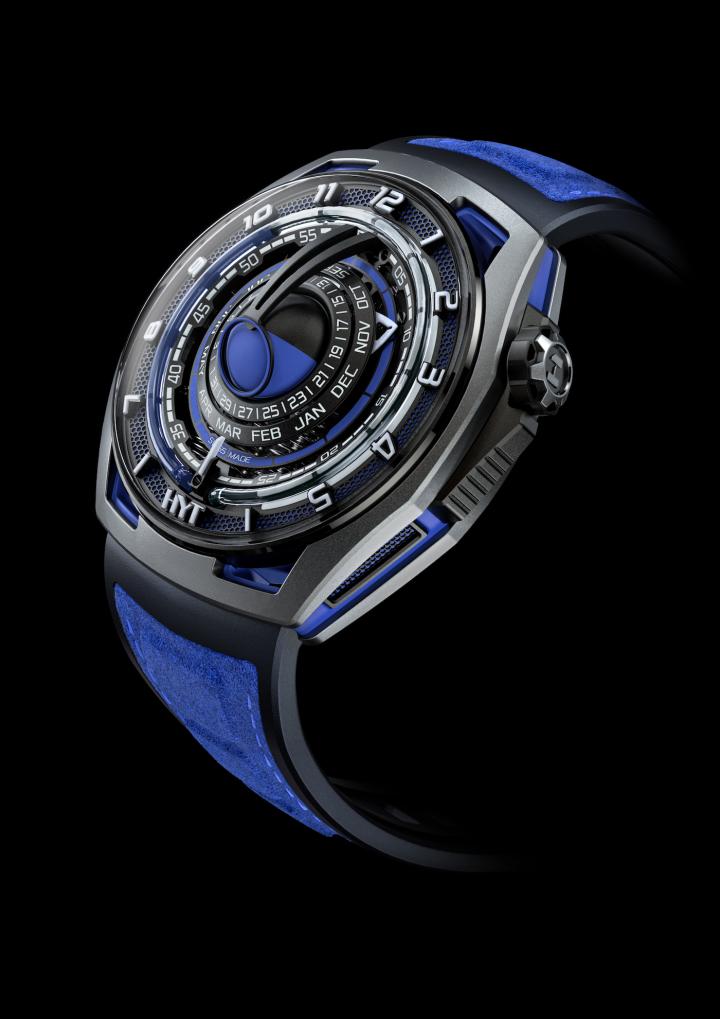 Only 27 copies of the new HYT Moon Runner, with its “Supernova Blue” colour, will be produced. Around the central moon display are two titanium indicator disks that show the days and months, in addition to accurate time settings with a hand running on a customised graduation with a 5-minute timer, and retrograde hours shown by the fluidic system. The model is priced at CHF 120,000 (excl. tax).

Are we to understand that you will be extending fluidic technology to complications?

Yes, we are going to take classic complications and give them a completely different, much more playful, expression. That’s the big challenge ahead of us now: to realise all the promises HYT made when it was launched ten years ago. The use of fluids will not be limited to time display. We’re coming with a model that features a fluidic complication. In addition, the possibilities for customisation are innumerable because the models are built with modularity in mind.

“That’s the big challenge ahead of us now: to realise all the promises HYT made when it was launched ten years ago. The fluid will not be limited to the display of the time.”

What design principles did you use to create your first model after you arrived, the Hastroid?

When I was wearing older models, I noticed they had certain limitations. They were bulky and heavy on the wrist. Reading the time was also made difficult by reflections and the complexity of the display. So we began by reducing the weight and volume for maximum ergonomics. The new model has a streamlined modular design, with a titanium and carbon case weighing just 80 grams, compared to 130 grams previously. The lugs are integrated to make it more comfortable to wear. The movement has also been reworked to create space, giving an almost skeletonised feel. Despite its 48mm measurement, it feels more like a 44mm or 45mm model. Everything contributes to make it more wearable.

Another improvement concerned legibility. We introduced a contrast between the back and the hour indexes, enhanced with Super-LumiNova, and we added numerals for immediate readability. The large minute hand is positioned in the centre of the dial. Finally, we worked hard on quality and reliability, which caused problems in the past. The entire project was built in partnership with quality suppliers, producing a very robust result. The first prototype was sent to the Dubois Laboratory and withstood some 17,000 shocks of increasing force.