Japanese maki-e lacquer brings a touch of the East to Swiss watchmaking with techniques that are even older than the measurement of time.

Japanese maki-e lacquer brings a touch of the East to Swiss watchmaking with techniques that are even older than the measurement of time.

Japanese lacquer dates back to Japan’s Jomon period, 5,000 BC, and like many of the Swiss watch arts (enamel, guilloché and engraving), it came very close to extinction. Today only a handful of dedicated craftsmen are keeping this ancient tradition alive, with a little help from the Swiss watch industry.
Brands such as Vacheron Constantin, Van Cleef & Arpels, Chopard, Peter-Speake-Marin, Jean Dunand and Angular Momentum have become captivated by this magical Asian art and are working together with lacquer artists to create dials that are miniature works of art.

Raw materials
Lacquerware is extremely popular in Asia and was initially developed to protect everyday objects from deteriorating. Lacquer can be found on everything from bowls to tea caddies and even furniture, but there are numerous techniques, from simple varnishes to the application of lac (a resin made from the secretions of insects) and true lacquer, which comes from the sap of the Rhus verniciiflua lacquer tree, better known as the urushi tree.
Collecting this true lacquer demands both expertise and patience as the sap can only be harvested from trees that are over 10 years old. Five to 10 parallel horizontal gashes are cut into the trunk of the tree to collect the thick, grey-coloured, caustic and toxic sap. Each tree can be tapped several times a year, but will only produce about half a cup of sap and then often needs to be left for a number of years before becoming productive again. The quality of the sap can vary greatly depending on the age of the tree, the type of soil, the climate and season. The finest sap is collected in July and August and is collected separately and reserved for the final layers of lacquer decoration. Once the lacquer has been collected, it is filtered through a cloth to remove any impurities and then stored in a wooden barrel for three to five years.

The application process
Lacquer can be applied to a number of ma-terials, such as metal, wood, leather, textiles, ceramic and bamboo. For watch dials, the base of the dials are usually in gold or mother-of-pearl. The surfaces need to be meticulously cleaned and prepared before the lacquerwork can begin. The lacquer is applied layer by layer, with each layer needing to be left to dry before the next layer is added. There are sometimes as many as one hundred layers (measuring 0.8mm to 1mm in thickness each).
When lacquer hardens, it is not drying in the conventional sense; instead it is actually curing through a chemical reaction that takes place in moist air. Raw lacquer contains an enzyme called laccase, which, in the right atmospheric conditions, acts as a catalyst for its oxidization and results in a permanent hardening of the lacquer.

Artistic possibilities
The lacquer used in watchmaking is generally maki-e lacquer. The word maki-e literally means ‘sprinkled picture’ and is recognisable by the application of metal powders, usually gold, platinum, silver or tin onto the lacquer while it is still wet using a makizutsu (a sprinkling canister) or a kebo (paintbrush). There are many different maki-e techniques, but the three principal types are: togidashi, takamaki-e and hari maki-e. Togidashi maki-e lacquer is distinguished by a last and final coat of lacquer that is applied over the top of the metal powder and then burnished slightly so that the metallic sprinkles can be faintly seen below. Takamaki-e means raised maki-e and is a technique that builds a design by using lacquer mixed with charcoal or clay dust to give volume and accentuate the contours of the design. Hari maki-e, or ‘flat’ maki-e, as it is often called, is the simplest form of lacquerwork and the design is added to the lacquer afterwards. Other variations also exist which include eggshells, gold leaf, abalone or mother-of-pearl, opening the doors to incredible design possibilities.

Vacheron Constantin’s Métiers d’Arts
Since its foundation in 1755, Vacheron Constantin’s timepieces have built bridges between countries and cultures. François Constantin, was one of the first to physically travel around the world extending the manufacture’s expertise to other continents. Today the Swiss manufacture is not only extending bridges to consumers but also to artistic partners, with an association with the famous Zohiko maki-e lacquer workshop in Kyoto, Japan.
“The association with Zohiko made a perfect match with Vacheron Constantin’s values and heritage, in particular when we consider that both companies have a total of 606 years of experience in ultimate craftsmanship and technical know-how,” shares the brand’s Head of Product Development, Christian Selmoni.
The first maki-e lacquer collection, ‘La Symbolique des Laques’, was launched in 2010 and cel-ebrated the theme of long life with the Japanese symbol ‘The three friends of winter’. These three friends – pine, bamboo and plum – are the three trees that flourish in winter despite the cold and the snow, showing resilience and strength. They are depicted on three different dials together with different winter birds.
The second maki-e collection is dedicated to the world of water with turtles, frogs, carp, lotus, hydrangeas and waterfalls. This new series of dials offers a more decorative and almost three-dimensional collection that showcases the diversity of Zohiko’s art. The dials have a darker aspect to them thanks to a different technique called hirame, which consists of spreading hirame powder onto the dial, before the lacquer is applied. This technique is followed by a polishing process called momidashi that uses oil stones to help capture the light. A third technique, kakiwari, reveals the details of the plants’ veins creating stunning artistic results. “Both collections have received a fantastic welcome and we are looking forward to the last set – in 2012 – which will close the series; we have just finished the first samples, and the 2012 set appears to be very promising,” shares Selmoni. 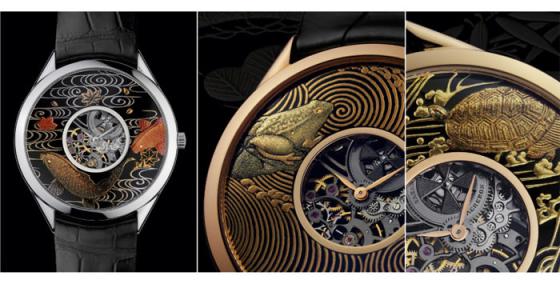 Chopard’s L.U.C XP Urushi
In 2009 Chopard created a selection of urushi lacquer timepieces for its Japanese market, and this year sees the presentation of a collection of nine different maki-e lacquer designs within a thin and elegant 39.50 mm gold case. Technically supervised by maki-e lacquer master Kiichiro Masumura (who was recently named ‘Living National Treasure’ by the Japanese government), the dials are then designed, painted and adorned with gold dust by the Yamada Heiando Company, the official supplier to the Emperor of Japan.
The different dials represent the five basic el-ements of the universe according to ancient Asian philosophy: Wood, fire, earth, metal and water. The dials include dragons, phoenixes, tigers, peacocks, fish and mythical creatures, such as the qilin and the genbu, using techniques that bring the dials to life with colour and intensity. 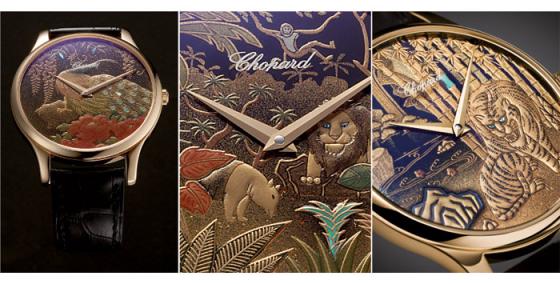 Peter Speake-Marin takes lacquer to artistic extremes
Peter Speake-Marin is as passionate about mechanics as he is about the arts that surround his movements, and maki-e lacquer is just one of many artistic forms that he has recently been celebrating. The timepieces photographed here are proof themselves that his extraordinary maki-e lacquer dials are far from simple layerings of lacquer, but rather three dimensional sculptures. Each masterpiece includes a combination of materials such as black lacquer, red lacquer, ash, mother-of-pearl, tin, silver, gold leaf and platinum. Speake-Marin entrusts his dials to the expert Muchu Yamazaki, who can take up to six months to produce one single dial. 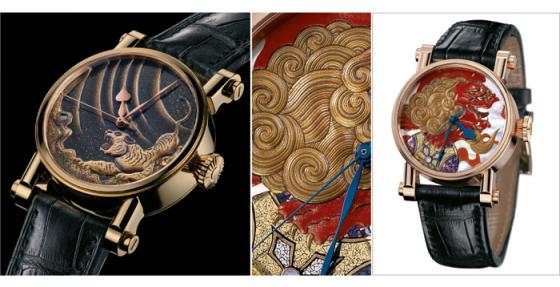 Jean Dunand’s Chinese lacquer
The beauty of Jean Dunand’s Orbital Tourbillons is that each and every one of these unique timepiece brings together different artisans and their crafts, whether it is enamel, engraving, gem setting, lacquer work and more. So many different artistic skills have graced the dials of this one-minute tourbillon, whose revolutionary technology rotates the dial and its tourbillon every 60 seconds, creating masterpieces in motion.
The Tourbillon Orbital Chinese Lacquer turning dial features red, grey, indigo and black lacquer and has been created in celebration of the artist Jean Dunand’s lacquer work that was to mark the 1920s.
Bold geometric figures and solid colours are achieved using the champlevé technique whereby cells are hollowed out of the gold dial to create the basis for the design, The next step is to fill these cells with 10 layers of lacquer. Each layer must be perfectly dry before it is buffed and polished, ready for the next layer.
Jean Dunand’s founders Thierry Oulevay and Christophe Claret worked together with one of the very few Western workshops capable of executing such painstaking work. It took two whole years of research to find ways to apply the lacquer to such a small surface, with ad-ditional challenges of sharp 90 degree angles, zigzagging rhomboids and the circumference of the round window displaying the orbital. The result speaks for itself. 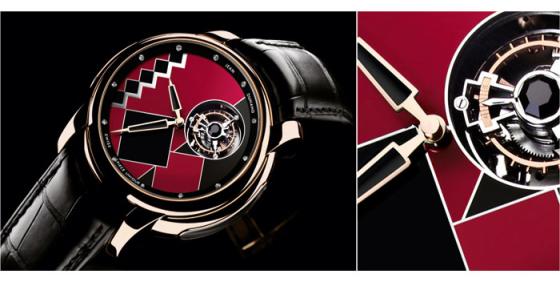 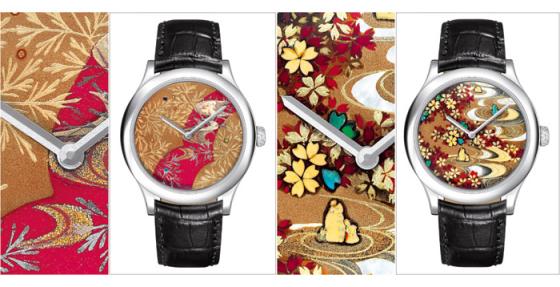 Angular Momentum’s workshop of wonders
Angular Momentum is one of only a very few independent workshops that make all its watch cases and dials in-house. The brand is best known for its development of miniature painting on the back of a watch sapphire crystal, an invention that is unique to Angular Momentum and called Verre Eglomisé.
The company’s founder, Martin Pauli, prides himself on using old, traditional and new decorative techniques to create bespoke timepieces for his clients (for more on the world of custom made timepieces see our article on the subject in this issue). He is also proficient in the arts of Plique à Jour and Champlevé enamelling and lacquerwork.
“I have been studying Japanese arts and crafts for almost 25 years,” shares Pauli. “A friend of mine, who works at the Tokyo National Museum, is an expert in lacquer and its restoration, and I have learned many interesting techniques from him,” he explains. “The dial of the classic Urushi Dress Watch was made using a technique called Shibata Zeshin, named after the great 19th century lacquer master of the same name, while other timepieces are a mix of crafts and not traditional Japanese techniques,” Pauli notes. 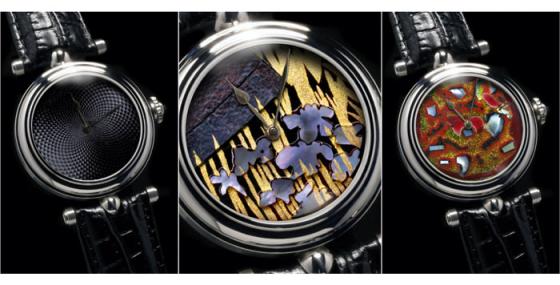 Lacquer is proving to be a fascinating new material for watchmakers to experiment with, as more and more companies join forces with artisans on the other side of the globe. However, like with all métiers d’arts, it is not always easy to understand the dramatic increase in price of a lacquer timepiece. The complexity of each dial, the rarity of the craftsmen who still know the recipe and the sheer number of hours that each dial takes to produce all play a role in the final price. But once the consumer can truly understand what goes behind the dial, his comprehension of this 7,000 year old craft can only bring a new dimension to his love of watchmaking and appreciation for time itself.