The H 1837 movement, at the heart of the watch strategy of Hermès


The H 1837 movement, at the heart of the watch strategy of Hermès

Contrary to many other watch brands, which—having hardly hatched from the egg—loudly proclaim that they have produced their “in-house calibre” in record time, Hermès has taken a bit longer—34 years to be exact—to reach this decisive step. And, as we have emphasised on many occasions in our columns, Hermès’s slow and steady progress is a cardinal virtue.“La Montre Hermès” was founded in 1978 by Jean-Louis Dumas who, for the first time, relocated one of the professions of the family firm. In this case, the new location was Switzerland since it was necessary to go to the heart of the watchmaking industry in order to acquire, step by step, the required know-how. This date was, however, not the first foray of Hermès into the world of watches. What many people do not know is that the French house ventured into the realm of timekeeping nearly 100 years ago. A famous photo from the 1920s shows the petite Jacqueline Hermès (the grandmother of Guillaume De Seynes, who managed La Montre Hermès from 1999 to 2005 and is today its president) wearing, on the wrist, a small leather-covered pocket watch, mounted on a bracelet. Later, in the 1930s, Hermès expanded its collaboration with a number of large Swiss watch brands (Jaeger-LeCoultre, IWC, Audemars Piguet, Cyma, Minerva, and Universal Genève, among others), and demonstrated extraordinary creativity in many innovations, such as the first interchangeable watch straps, the first watches for golfers, and the famous Hermeto that was wound using slides.

Progressive strength in mechanical watchesIn the beginning, the Bienne-based La Montre Hermès produced essentially ladies’ watches, which were mainly driven by quartz movements. The developments in the mechanical domain have been gradual, but the brand took a decisive step in 2006 when it acquired a 25 per cent interest in Manufacture Vaucher. Hermès has thus been working on a project to create a basic mechanical movement that the brand can call its own. “The work took three years longer than what we had planned,” explains Luc Perramond, CEO of La Montre Hermès since the beginning of 2009, “but we wanted to create a basic calibre that not only has good performance but that also is totally reliable. At Hermès, we don’t launch a product unless it has been completely finalised and tested.”

The H 1837This calibre, named H 1837 (the date that Hermès was founded—the brand celebrates its 175th anniversary this year) was designed in collaboration with Vaucher Manufacture to be a basic calibre, a “tractor” that would serve as the base for an entire family of calibres. It is 11/½ lines (a diameter of 26.6mm), has a thickness of 3.70 mm, a double barrel, runs at a frequency of 4 Hz (28,800 vibrations per hour), and has a power reserve of 50 hours.“We have made a series of significant improvements to our initial developments,” continues Perramond. “We have therefore slightly in-creased the thickness of the calibre, going to 3.70 mm from the original 3.50 mm in order to increase rigidity and thus reliability. We have also designed a new system for winding, improved the oscillating weight, revisited the attachment points of the movement, and boosted the specifications so that it could obtain Chronofiable certification, which it has now done.” On this entirely autonomous base, of which all the component parts are produced “in-house”, including the regulating organ and the Atokalpa balance spring, Hermès intends to gradually develop small complications, perhaps even grandes complications, as well as a chronograph movement, in order to offer a complete range of manufacture timekeepers. The complications will not be integrated into the movement but rather mounted on additional plates. 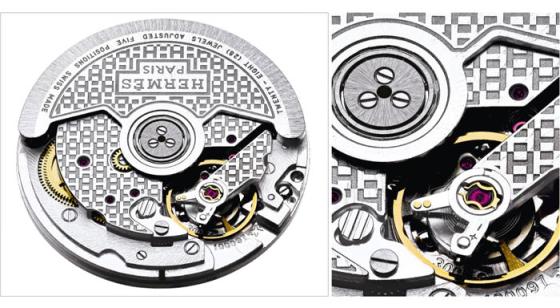 Equipping the DressageFor its introduction, the H 1837 is equipping a new timekeeper in the Dressage collection, “the fifth watch pillar of the brand”, designed in 2003 by Henri Dorigny. For the occasion, the 40-mm model has been redesigned. More rounded than earlier, its opening has been reworked and its bezel has been enlarged so that it now harmonises better with the Dressage’s very characteristic lugs, which have preserved their line but have been slightly softened. The dial has also been revisited, guilloched in the spirit of watch classicism, but with its characteristic encircled large numbers. On the back side, the very classic architecture of the movement, with the very recognisable “H” motif and other special finishes, can be seen through the sapphire crystal. Two versions are available, with a choice of a silvered or black dial. One option has a date, while the other has a small seconds hand at 6 o’clock. The steel version of the Dressage 1837, which also comes on an integrated metal bracelet, sells for €8,000. A rose-gold version with a silvered dial and small seconds is also available. A special limited series of 175 timepieces in rose gold will also be produced in celebration of the brand’s 175th anniversary. 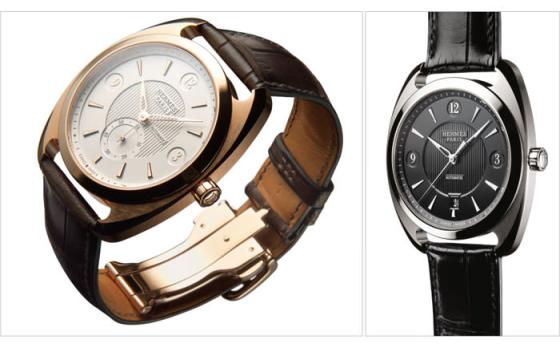 Timekeeping affirmation The new Dressage is a key element in the global strategy put in place by Hermès in terms of its autonomy and the progressive affirmation of its timekeeping abilities—which received an extraordinary boost last year with Le Temps Suspendu, an emblematic watch that allowed Hermès to define its very special, unique, and poetic type of timekeeping (which could, we hear, soon come out in a ladies’ version). Beyond that, the new strategy is an additional step in the brand’s efforts to create more men’s watches. Today, the mix is 40 per cent masculine (compared to 20 per cent only three years ago) and 33 per cent mechanical watches. “Our entire mechanical line has been improved,” adds Luc Perramond, “with an entry-level piece selling for around €3,000 in the Arceau collection, and with the Clipper chronograph equipped with a Valjoux movement. Our average price has thus rapidly increased everywhere in the world. It is now €2,600, or even €4,000 in Asia.”Hermès is also demonstrating its watch ambitions through its distribution, which is rather particular in that it consists of three different types: a network of specialised retailers, comprising approximately 700 sales points; the multi-product Hermès boutiques that number 325 in the world; and the recent creation three years ago of a specific network of Hermès boutiques selling only watches. “These are stores of around 50 square metres to 100 square metres, which all display the Hermès codes, but are specialised in watchmaking. They are important for us because we can present the ensemble of our watch universe—masculine and feminine, arts, jewellery, etc. Since we still suffer from a lack of visibility on the watchmaking front, these boutiques are important as they showcase the genuine horological substance of our offer, which is presented by a very well trained personnel. We initiated this new concept in Asia in 2009 with eight boutiques in China, one in Taipei, two in Singapore, one in Kuala Lumpur, and one in Paris in the Galeries Lafayette. We are also going to expand this to other regions of the world, notably the United States, a market that I believe in very much, as well as in Dubai and Moscow, in order to reach a total of around 30 watch boutiques.”As part of Hermès’ strategy to present value and not volume, the new H 1837 in-house movement will undoubtedly be a central pillar.