SOLID FOUNDATIONS at the base of the watchmaking pyramid


SOLID FOUNDATIONS at the base of the watchmaking pyramid

My planning for BaselWorld saw me in contact with many of the industry’s biggest volume manufacturers. As luck would have it, it was in this very segment that the industry, and in particular the Swatch Group, was making its game plan for the future. As Certina and Tissot pushed down the prices of high-quality mechanical watches even further, Swatch marked its first-ever presence at BaselWorld with a tour de force that not only upsets the status quo in the Swiss watchmaking industry but could also send shockwaves as far afield as China and Hong Kong.

Swatch throws down the gauntlet

Swatch celebrated its 30th anniversary this year with its first-ever stand at BaselWorld. As if to make up for its absence from the world’s biggest watch and jewellery fair during its formative and early adult years, the brand took over the entire surface area of the new southern entrance to Hall 1, creating an inviting space where, spread across 288 different glass display cases, visitors could see every single Swatch model ever produced. The 30th anniversary of the watch that saved the Swiss watch industry was definitely something worth celebrating and “Planet Swatch”, as the brand dubbed its presence at the show, did so in style, choosing a different theme (art, fashion, sports, ladies and colours) each day and organising activities related to these themes on the stand.

But the announcement at the brand’s press conference on the first day of the fair, when the stand became “Planet Innovation”, overshadowed even the exuberance of these celebrations. As Swatch Group CEO Nick Hayek took the stage with the brand’s creative director, Carlo Giordanetti, and Thierry Cornus, who is responsible for the development of mechanical movements at the group’s movement manufacturer ETA, it was clear that the announcement would be something big. In what was undoubtedly the most significant development to be presented at BaselWorld, if not in the industry as a whole since the birth of the original plastic Swatch itself, Nick Hayek presented the world’s first self-winding mechanical watch with a fully automated assembly and with no need for servicing of any kind. 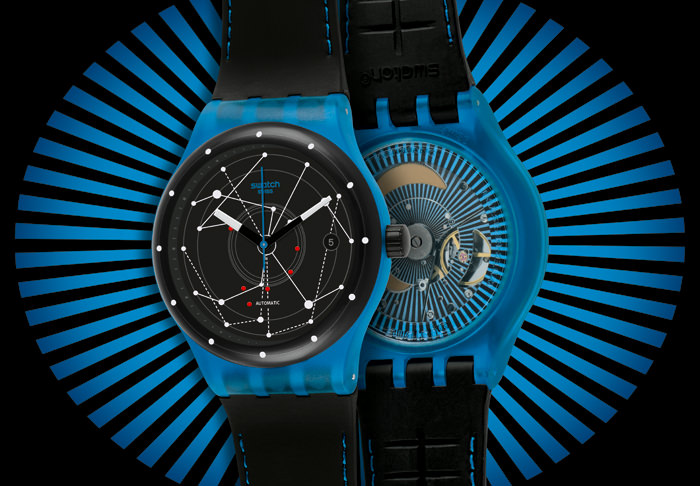 SISTEM51 by Swatch
The dawn of a new era: Sistem51 is the result of a totally new way of manufacturing a mechanical watch movement. The entire process is fully automated and the movement remains hermetically sealed inside the finished timepiece. Its sub-200 Swiss franc retail price throws down the gauntlet to the competition.

The new watch is called Sistem51 because the movement consists of a mere 51 components, just like the original Swatch. Its base plate, made entirely out of the ARCAP alloy (copper, nickel and zinc) and thus anti-magnetic, houses the gear train, hand fittings and date disc. Four separate modules, for the time-setting stem, escapement and self-winding mechanism, are soldered to this base, with the oscillating mass, which consists of a transparent disc, fixed by a central screw—the only screw in the entire movement. The movement’s rate is set by laser at the factory (it has no index assembly) and then the movement is hermetically sealed inside the watch to prevent moisture or dust from entering. Swatch claims astonishing figures for precision (+/- 5 seconds per day) and power reserve (90 hours). A mere six jewels are used in the movement and they serve as the inspiration for the first designs for this revolutionary new watch. The movement itself can also be printed on, which will allow innumerable different decorations, all visible without obstruction through the transparent case back and transparent oscillating mass.

Without stipulating a specific figure, Nick Hayek’s statement that the Sistem51 would “cost between 100 and 200 Swiss francs retail, but be closer to 100 than 200” gives a maximum retail price of 149 Swiss francs.

“This aggressive pricing could allow Swatch to grab market share from any number of entry-level quartz brands.”

This aggressive pricing could allow Swatch to grab market share from any number of entry-level quartz brands but, more importantly, sends a clear signal to the manufacturers in China and Hong Kong, who will need to take note and adapt, and fast. It was clear from Europa Star’s discussions with representatives of the Hong Kong watch industry at BaselWorld that they had yet to grasp the significance of this new movement.

The Sistem51, which took only two years to bring to market, is impressive enough on its own, but when placed into the context of recent developments at what the Swatch Group refers to as its “middle range” brands (Tissot, Certina, Hamilton, Mido and Calvin Klein Watches) it only serves to show how the Swatch Group is betting on the entry-level price segment for future growth. Certina was the latest Swatch Group brand to introduce the Powermatic 80 movement into its collection, but despite flirting with its roots as a manufacture the 125 year-old brand is not about to give up on quartz. As Certina’s CEO André Bosshard told Europa Star, “The quartz segment still has some potential (…) and should not be neglected. Some customers are interested more in a watch’s design and the materials used rather than the movement inside.” The brand will even be presenting its own exclusive quartz chronometer calibre later this year, which will have an accuracy of +/- 10 seconds per year, as well as a new CO1 self-winding mechanical chronograph calibre that will retail for under 1,000 Swiss francs. See the separate interview with Certina CEO and former MotoGP rider André Bosshard.

THE WATCH FILE Baselworld as we knew it is over. Its main pillars have collapsed. Patek Philippe, Rolex, Tudor, Chopard and Chanel leave Basel and join Geneva, the FHH (...)