At Lunch with... ROMAIN GAUTHIER - A logical career path


At Lunch with... ROMAIN GAUTHIER - A logical career path

At the age of 38, Romain Gauthier can be proud of his career path: he is in charge of a manufacture that is modestly-sized but genuine; he has designed, developed and produced his own movement; he recently finished a highly innovative constant force watch, the Logical One, for which he registered four patents and sold 35 examples at BaselWorld this year. 35 watches? A drop in the ocean, I hear you say. Yes, but only 40 Logical One pieces will be produced, 20 in red gold at CHF 120,000 and 20 in platinum at CHF 135,000 (excluding tax). This equates to a turnover of over five million.

Europa Star met him first at his workshop in the Vallée de Joux, then later over a steak tartare and a glass of Bordeaux, at the Restaurant des Horlogers in Le Brassus. 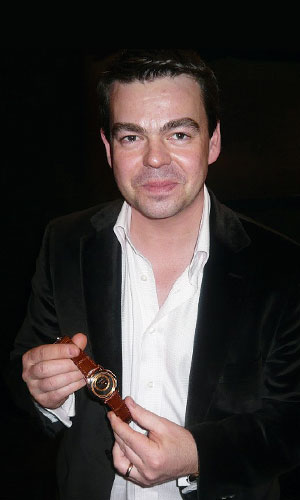 Born in the Vallée de Joux in 1975, Romain Gauthier does not have the typical career path of one of the new independent horological creators. He is not a watchmaker in the true sense of the word, but watchmaking is part of his “subconscious” as he says. Because whatever you do, here in the rural “valley of complications” with its Siberian winters, “you are surrounded by watchmaking from your childhood onwards”. So the mechanical passion is never very far away.

“He is not a watchmaker in the true sense of the word, but watchmaking is part of his ‘subconscious’ as he says.”

Romain Gauthier therefore started training in precision mechanics. His speciality: a machine constructor technician. At the age of 22 he started work at a company specialised in the production of watchmaking components and, very quickly, was entrusted with a machining pool. This is where he learned all the secrets of producing components for mechanical watches. The young man was ambitious, determined, serious and had a logical spirit. It was 1999 and he said to himself: “you know how to make components, so you are capable of producing your own movement”. But “movement” also means “business investment”. From then on, while continuing with his professional activity, Romain started an MBA in economics, finance and marketing. In 2002, he submitted his final dissertation, which received a distinction, which was “logically” about the business plan for setting up a watch brand called... Romain Gauthier. Two weeks after his oral exams he was at his “drawing board” (actually, a screen and design software) and started constructing his first movement, diving into mathematical equations. Three years later, at the end of 2005, he had his first prototype. “During my MBA, I kept pestering Philippe Dufour, who gave me advice. Then I didn’t contact him for another three years. I did everything in secret, by hand, without any help from outside. And at the same time I continued to work.” When the guru, who is universally acknowledged for the excellence of his work, first saw the Romain Gauthier watch, which was called Prestige HM and displayed the hours and minutes on an off-centre dial, he was very enthusiastic. But he also pushed him to go further in his finishing work. “I was at about 70 per cent of the quality of finish, my bevels were not rounded off and Philipe Dufour showed me how to produce a finish worthy of haute horlogerie.” While Philippe Dufour introduced his new protégé to everyone he knew, Romain Gauthier’s boss, to whom he had also showed the fruits of his labour, opened the doors of his factory to him so that he could use the facilities at weekends. Bridges, wheels, pinions, springs, screws… started to come off the stamping presses. “A first-rate machine park and, given my training, I knew how to machine components, at the right thickness and respecting the constraints of the different materials. This was a big advantage. I had previously produced 70 barrel drums for third parties.”In 2005, he got his first financing and, the following year, left the company where he worked (whose boss had seen him as his successor), hired a first watchmaker and started working 100 per cent for himself.In 2007, he exults: he shows off his first watch, fitted with his own calibre 2206 HM (for 22 jewels and the year 2006) at BaselWorld, in the same showcase as his mentor Philippe Dufour, made available by Vianney Halter. Things go well and he leaves with 25 orders, delivering his first timepiece in August 2007, “in Switzerland” as he proudly points out. 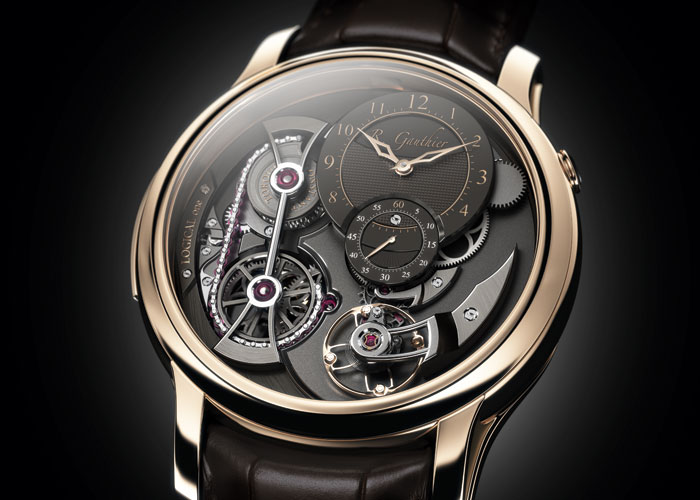 After 2008, the following years were more difficult. He started to build up a small production facility but the attitude among the team quickly became flippant. “It was a bit like the Club Med”, he confesses, “But above all, at a rhythm of two watches per month, I was delivering my products with 1,000 franc notes in them”. He had to dismiss some employees and build up a new team. In 2010 he presented an evolution of his original HM in Basel, adding seconds but more importantly changing from traditional aesthetics to a more open, semi openworked face. “It was the markets that urged me to evolve. All the collectors told me that it was a pity that everything was on the back...”But for this resolute and methodical man, it was time to think of a completely new movement, something to stand out and create a solid foundation for his brand. So in 2011 he decided to pursue a new direction. The following year was, as he himself admits, “a difficult year. I shut myself away at home, did my homework, with music for stimulation...”. At the same time, he gradually built up a stock of in-house components to ensure a logical progression in the brand’s development.In Basel this year he presented the fruit of his labours: the Logical One. “I had this watch in my mind for a long time. It had to be totally relevant and bring something new, something different. It had to be provocative but at the same time become part of our watchmaking heritage,” he says without any false modesty.

The tartare is long since finished. Tables are emptying and people from Audemars Piguet, the restaurant’s owners, but also from Jaeger-LeCoultre, Breguet and Blancpain say goodbye to each other and hop into their SUVs. 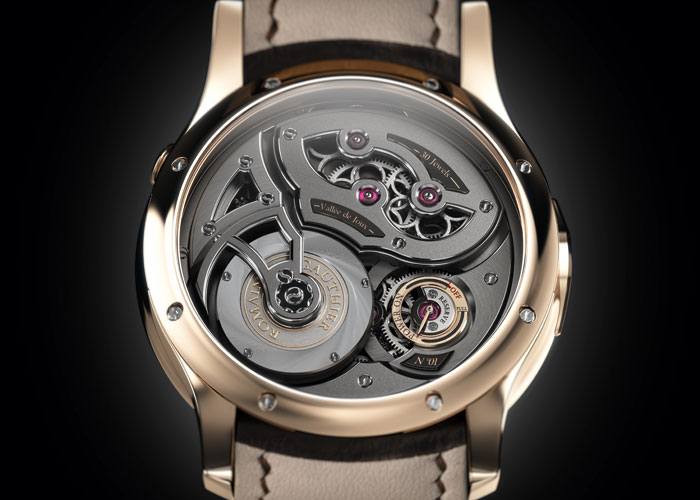 So, this Logical One? What is so exceptional about it that it becomes part of our watchmaking heritage?“On the right, you have all the watch, the displays, the escapement… on the left, the torque corrector for the constant force... and on the back, the entire case back is devoted to the reduction gears for the constant force, and the direct power reserve indicator,” he explains, flipping the watch over and back again. “The constant force is a complication that requires a very specific architecture. What’s more, you can count them on the fingers of one hand: Breguet, Lange, more recently Zenith, DeWitt, Cabestan...”, he lists them. We remind him of the recent Constant Force by Girard Perregaux. “Yes, but this is an entirely different type of solution. Having said that, any watch is the miniaturisation of a principle of physics.”To illustrate this, Romain Gauthier produces a series of graphs showing the perfect constant force, regardless of the watch’s position. “The strategic point is the centre pinion. All the maths starts there. You can see it on the back: the principle of reduction is essential, distributing the constant force over 360º, following a principle of the division of the number of revolutions, a correction, then the multiplication of the number of revolutions. The result is ± four seconds over the watch’s entire 60-hour power reserve, without any adjustment“, he argues.We take the object in our hands, we look at it, we admire it. There is nothing to say: the finishing is superlative, subtle, polished and sharp at the same time, worthy of Philippe Dufour’s seal of approval; the architecture of the movement has a didactic sobriety, the off-set dials give plenty of space to the escapement and fascinating chain and its rubies. The case has a perfectly curved roundness. Everything is classical in its execution, contemporary in its technicality, sensual and mathematical.

On that note we order our coffees. The weather is fine, the factories are bustling away in silence, a little further away two cows graze among the postcard scenery that does little to hint at the numerous treasures hidden in the valley. We speak freely, wondering why the best watchmaking always comes from mountainous regions: in the Swiss Jura, of course, but also in Glashütte, Saxony or in the Suwa region in northern Japan... the same cows, the same pine trees, the same men bent over similar workbenches.

The innovations of the Logical One

First conceived back in the 15th century, the traditional fusée/chain mechanism for constant force has two main disadvantages: at wristwatch scale, the levels on the fusée necessitate very small, and therefore fragile, links in the chain; furthermore the angle of the chain between the fusée and the barrel adds further tension.Romain Gauthier therefore replaced the fusée by a slow-rotating snail, placed at the same level as the barrel. It therefore always transmits its force in a straight line and, since the chain is shorter, its links can be bigger and more robust.As a result, Romain Gauthier was able to design a chain whose links were made of synthetic rubies, offering great resistance to wear and a low friction co-efficient. These links are attached by an innovative system of pressure clips that is simple, reliable and precise.

There is another innovation in the winding system: in place of the traditional crown, which transmits the winding energy at 90° to the barrel by means of a fine stem, the winding is instead done by a pusher on the left-hand side of the case. This system, which is very easy to use, allows the force to be transmitted to the barrel along the same single axis.Yet another innovation by Romain Gauthier is the two plates in synthetic sapphire that sandwich the mainspring. This material has a low co-efficient of friction with steel and is therefore highly resistant to scratches, which eliminates the recurrent problems with traditional brass barrels, which get progressively scratched by the spring and end up hindering the free winding and unwinding of the spring. Among the other characteristics worth noting about this movement in titanium and brass are the gear wheels with circular arms, which give them maximum rigidity, the high-efficiency profiles of the gear wheel teeth and the highly rigid triangular lever, which was invented by Romain Gauthier.