Fans of divers watches were well-served at this year’s SIHH. In addition to the classic styling of Cartier’s first ever diver’s watch (see Europa Star 06/2013), brands with a strong heritage in this field used their latest models to vie for the attention of aqua sport aficionados. 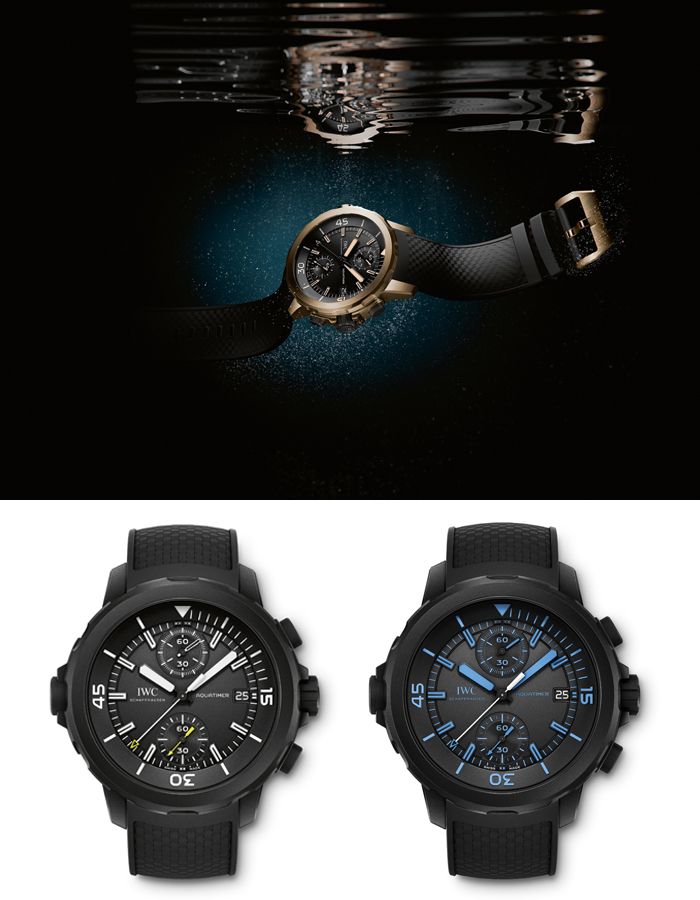 Aquatimer “Expedition Charles Darwin”, “Galapagos Islands” and “50 Years Science for Galapagos” by IWC
All three of these models use IWC’s in-house calibre 89365 self-winding chronograph movement, which operates at 28,800 vibrations per hour and offers 68 hours of power reserve. The Charles Darwin model has a bronze case, while the two chronographs dedicated to the Galapagos islands both have a case in rubber-coated stainless steel. All three timepieces are water resistant to 30 bar, or 300 metres.

IWC’s Aquatimer collection, which dates back to 1967, resurfaced in a new guise at the show, in a collection that ranges from the humble self-winding three-hander to the brand’s first haute horlogerie complication in a diver’s watch, including all the stops in between – all fitted with the brand’ss new quick-change system for swapping between straps. A new model in bronze – a first for IWC – is dedicated to the Charles Darwin Foundation, a charity that aims to preserve the unique environment of the Galapagos islands, and two Aquatimer chronographs pay tribute to the Galapagos islands themselves - the “Galapagos Islands” and “50 years science for Galapagos” (a limited edition of 500), both with a black rubber-coated stainless-steel case with IWC’s “SafeDive” rotating bezel and, like their bronze counterpart, the in-house calibre 89365 self-winding movement, which offers a power reserve of 68 hours.

Like Darwin, the renowned French marine explorer Jacques Cousteau also took an interest in the Galapagos habitat, following the prehistoric marine creatures native to the island from aboard his ship Calypso. This year, IWC dedicates its 6th special edition to the explorer, with part of the proceeds from sales of the Aquatimer Expedition Jacques-Yves Cousteau watch being donated to the Cousteau Society, which the explorer set up to help protect marine environments and which IWC has been supporting for ten years.

IWC also presented two models to appeal to avid divers. The Aquatimer Deep Three is, as its name suggests, the third diver’s watch to be offered by IWC that features a mechanical depth gauge as a back-up to a dive computer. A special crown at 9 o’clock incorporates a membrane that reacts to changes in water pressure, translating this into indications on the dial using a lever system: blue for the current depth and red for the maximum depth reached (up to a maximum of 50 metres). Divers can thus calculate their decompression stops and monitor their ascent speed simply by looking at their Aquatimer Deep Three. 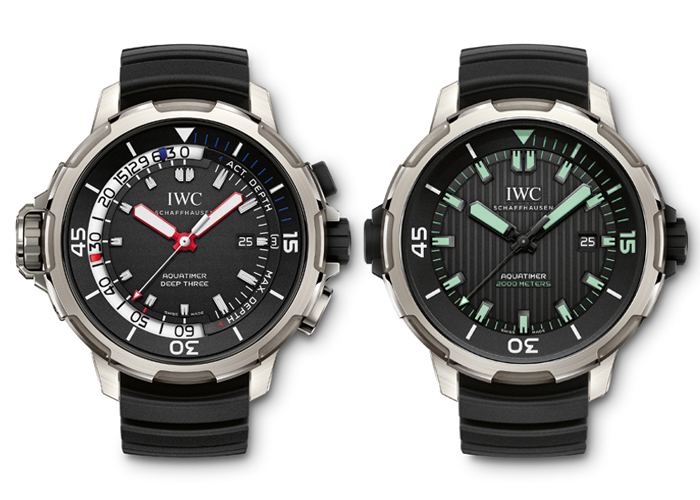 The new Aquatimer Automatic 2000 harks back to an era in IWC’s history, over 30 years ago, when Porsche design featured in the collection. Ferdinand A. Porsche, the man behind the iconic Porsche 911, designed diver’s watches that IWC had been commissioned to produce for commando frogmen and mine clearance divers. He subsequently designed the Ocean 2000, the first diver’s watch to be produced in titanium (IWC was the only company capable of machining titanium at the time). The 2,000 in the name refers to the watch’s impressive water resistance of 2,000 metres, which should be more than enough to satisfy the needs of professional and amateur divers alike.

A DIFFERENT EVOLUTION Just like IWC, Officine Panerai also has a history of supplying navy divers. But with the exception of the Luminor Submersible models, you will not find any rotating bezels in the Officine Panerai collection, since it has evolved over the years to epitomise classic style, with plain bezels and dials coupled with some of the finest leather straps found on any watch. The signature crown-locking mechanism of the Luminor collection, housed in its oversized protector on the side of the case, is the only consistent recollection of Panerai’s deep-sea connections. 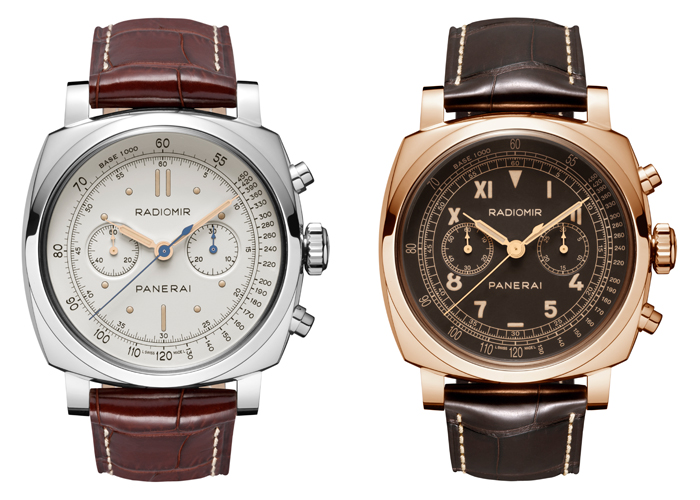 Radiomir 1940 Chronograph by Officine Panerai
This limited edition uses the exclusive Panerai OP XXV hand-wound calibre, which operates at 18,000 vibrations per hour and offers 55 hours of power reserve, is visible through a transparent sapphire crystal case back.

But the collection of three new limited-edition chronographs presented in precious metals at the 2014 SIHH proves that the brand’s history still has an important role to play. The vintage look of these models is not just confined to the railway-style scales around the dial: the dial itself is housed behind a Plexiglas® crystal, just like the original Radiomir models from the 1940s. Panerai also appropriately uses an historical movement for this mini-series (50 in platinum, 100 each in red and white gold), since its Opus XXV hand-wound column-wheel chronograph is based on the Minerva 13-22 calibre, the original design of which dates back to 1923, when Minerva was already a supplier to the Florentine brand. (The Fabrique d’Horlogerie Minerva SA has since become the Montblanc manufacture after its acquisition by the Richemont Group in 2006.) 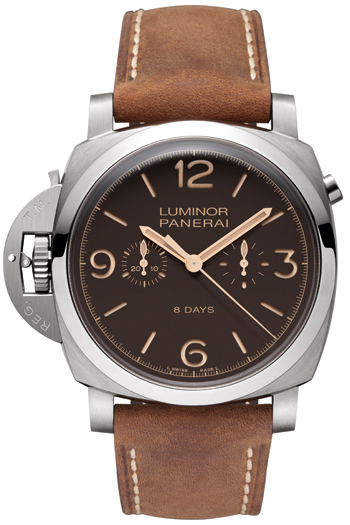 Luminor 1950 Chrono Monopulsante Left-Handed 8 Days by Officine Panerai
A limited edition of 300, this model has a 47mm case in brushed titanium with a polished titanium bezel and a brown dial with luminous Arabic numerals and hour markers. It is powered by the Panerai P.2004/9 calibre, which beats at 28,800 vibrations per hour and has three mainspring barrels that offer a power reserve of eight days.

This crop of new chronographs is completed by the Luminor 1950 Chrono Monopulsante in a left-handed configuration with eight days of power reserve. On this 47mm model with a brushed titanium case, the crown is found at 9 o’clock in recollection of the early divers’ habit of wearing their watches on the right wrist, since their left wrist was already occupied by their dive compass. This limited edition of 300 uses the manually wound Panerai P.2004/9 calibre column-wheel chronograph movement which has a single pusher at 2 o’clock for starting, stopping and resetting the chronograph.

COMPETITION IN CERAMIC The creative minds at Chanel will no doubt be watching Audemars Piguet closely after the manufacture from Le Brassus introduced high-tech white ceramic into its collection for the first time this year. It is used in one of the most eye-catching models seen at the SIHH this year, the Royal Oak Concept GMT Tourbillon, which continues the brand’s tradition of presenting concept watches that dates back to 2002. 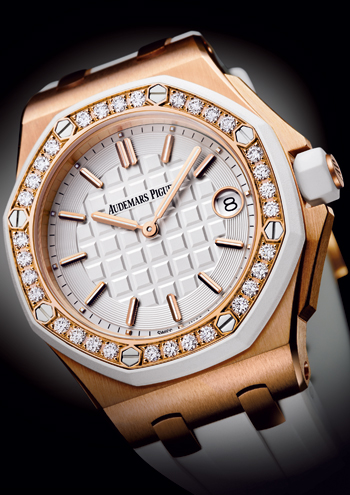 Royal Oak Offshore Diver by Audemars Piguet
Even with a transparent sapphire crystal case back showing off the Calibre 3120 self-winding movement (21,600 vibrations per hour, 60 hours’ power reserve), this remains a true divers’ watch guaranteed water resistant to 300 metres. The use of white ceramic makes the 42mm case ultra resistant, with white ceramic also used for the bezel and crowns and a white rubber strap completing the distinctive look.

Even more white ceramic is used on the new 42mm Royal Oak Offshore Diver, for the crown and pusher, the bezel and the case middle. And with good reason. It is 40 per cent more scratch-resistant than black ceramic (1,850 Vickers compared with 1,300 Vickers). On other divers’ watches, the screw-in crown at 10 o’clock would be a helium escape valve, but on the Royal Oak Offshore Diver it unlocks the dive-time preselection mechanism that turns the inner bezel. 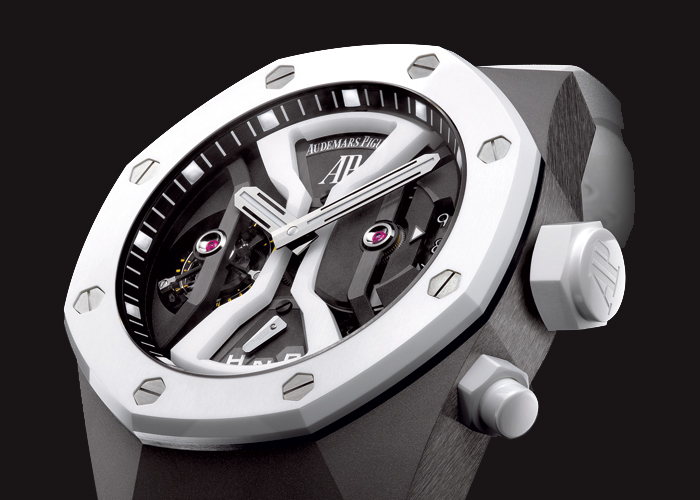 The latest Royal Oak concept model stands out thanks to its white ceramic bezel, crown, pusher and white rubber strap set against the background of a brushed titanium case, with a distinctively shaped white ceramic upper bridge that frames the Audemars Piguet logo at 12 o’clock and the function selector at 6 o’clock in lieu of a dial. Opposite the tourbillon visible at 9 o’clock is a digital second time zone indication that uses two superimposed discs – one with the hour numerals (1-12) that completes a revolution in 12 hours and another underneath that completes a revolution in 24 hours and is divided into white and black to differentiate between night and day. The time zone can be changed simply by pressing the pusher at 4 o’clock, which moves the indication forward by one hour. Timekeeping is provided by the Calibre 2930 manually-wound movement, which has a 10-day power reserve provided by two barrels that unwind in parallel and transmit their energy to the gear train via a single pinion – a lower-friction means of transmission compared with the two barrels linked in series that are found in other long-running movements.

The use of ceramic is also evident in the new 42mm Royal Oak Offshore chronograph models, on which black ceramic replaces rubber as the material for the crown and pushers. Although Audemars Piguet proclaims a “more technical, sculpted” aesthetic for the new pieces, they nevertheless retain the look of the original Royal Oak models from 40 years ago. Some new, more feminine designs in the Royal Oak collection are just one example, along with a new advertising campaign designed specifically for ladies’ watches, of how Audemars Piguet CEO François-Henry Bennahmias is hoping to increase the share of ladies’ watch sales from one quarter to over a third of the 35,000-plus watches that the brand sells each year.