DIVING WATCHES - BLANCPAIN:
The Man, The Watch and The Sea


DIVING WATCHES - BLANCPAIN:
The Man, The Watch and The Sea

Since the origins of modern diving, the watchmaking industry has always maintained close ties with the world of the sea. Blancpain’s Fifty Fathoms collection embodies these historic bonds. Retrospective with Alain Delamuraz, Blancpain vice-president.

“Free man, you’ll always love the sea - for this, / That it’s a mirror, where you see your soul / In its eternal waves that chafe and roll; / Nor is your soul less bitter an abyss.” Measuring time under the sea – an element whose very timelessness was noted by Baudelaire – is something that a number of brands – Rolex, Panerai, Omega and, of course, Blancpain, to mention just the most prestigious – have made their speciality, in the unique form of the diving watch.

In 1953, with Jean-Jacques Fiechter at the helm, Blancpain, in close cooperation with the French army, launched the ‘first modern diving watch’, the legendary Fifty Fathoms, which has since been reissued in multiple variations. Sixty years later, the collection is still current. And, in a telling sign of our times, environmental issues have been added to the simple function of keeping track of time underwater. As part of its ‘Ocean Commitment’ programme, the Swatch Group subsidiary recently launched a new limited edition diving watch, the ‘Bathyscaphe Chronographe Flyback’ (see sidebar). The programme aims to raise awareness and preserve the submarine world by supporting explorers such as Enric Sala of National Geographic, and diver and naturalist Laurent Ballesta – the first person ever to capture the coelacanth, nature’s ‘living fossil’, on film (see photos).

In an interview with Europa Star, Blancpain’s vice-president and marketing director Alain Delamuraz sketched out in text and images the close links that have always bound the brand to the world of the sea. 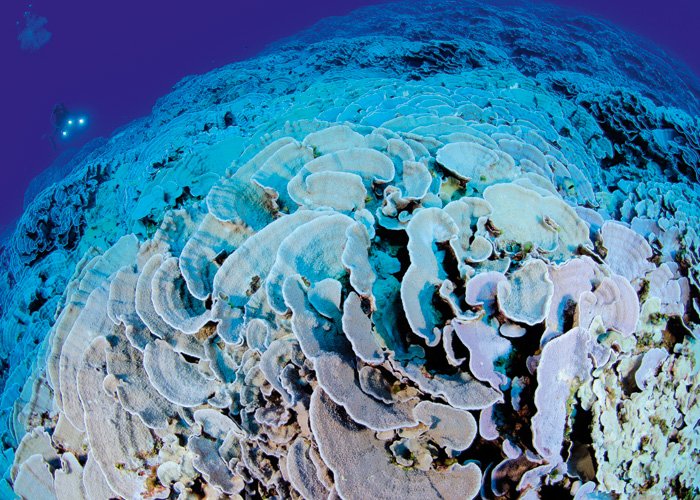 You present the 1953 Fifty Fathoms as the first ‘modern’ diving watch. How was it a pioneer? Were there no diving watches prior to that? Alain Delamuraz: It was around that year that scuba diving began to take off. Before that, divers had to use a rebreather connected to the surface. Popular figures such as Jacques-Yves Cousteau and Hans Haas revolutionised the domain. At that time it also became important to be able to measure time differently under water. Prior to that, it was enough for the watch to be waterproof. Once they were free to move around under the water without being connected to the surface, military and civilian divers needed more information: they needed to be able to measure elapsed time, of course, but they also needed a depth gauge and a compass. It was also necessary to be able to read this information in the dark. We were the first brand to bring together all these different functions in a single case. Our great innovation was the unidirectional rotating bezel to measure dive time, allowing the diver to calculate the amount of oxygen left in the tanks. We put these different elements together to create the first modern diving watch.

“At first some divers were skeptical about the ‘X Fathoms’, but when they returned from their dive they confirmed that the depth meter was as accurate as, if not more accurate than, their computers.”

Are the Fifty Fathoms customers of today still keen divers? AD: It’s true that diving watches have been fashionable for a number of years, and some clients just like the watches, without necessarily being interested in diving as such. But I can assure you that there are still many of them who dive! They are the ones we rely on to validate our innovative features. When we launch a new watch, they immediately test it on a dive. With them, we’re not allowed to make mistakes. I remember, at first some divers were skeptical about the ‘X Fathoms’, but when they returned from their dive they confirmed that the depth meter was as accurate as, if not more accurate than, their computers. We have great credibility in the diving world.

What’s new about the ‘Ocean Commitment Bathyscaphe Chronographe Flyback’? AD: This watch embodies an entire concept of environmental and scientific commitment. But from a strictly technical point of view, the main new feature is the 5 Hz frequency of the movement. In a dive watch, it helps reduce friction and increase accuracy. 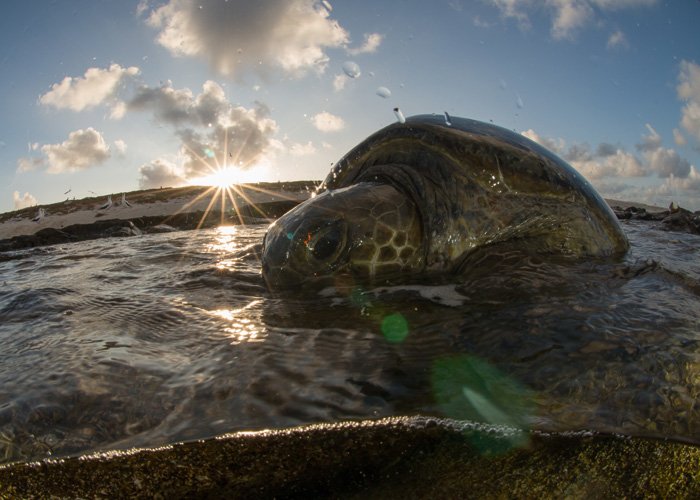 New Caledonia expedition: A green turtle returns to the sea after a night laying eggs at the remote Huon Island.

Is there anywhere that the Fifty Fathoms is particularly sought after? AD: Sales are pretty evenly distributed all over the world. However, in China the Fifty Fathoms is slightly less successful than more classic models such as the Villeret. At the end of the day, the Chinese are perhaps less drawn to the sea; they prefer the mountains. Singaporeans, Americans and Europeans, on the other hand, are very good clients.

Is Blancpain as a whole feeling the effects of the slowdown in the Chinese market, as other brands have reported? AD: We were lucky to have a presence in the Chinese market quite early on. The Chinese remember that. And although growth is slowing down on the mainland, tourists who travel abroad are making up for the drop in sales. We have had a very good year so far. 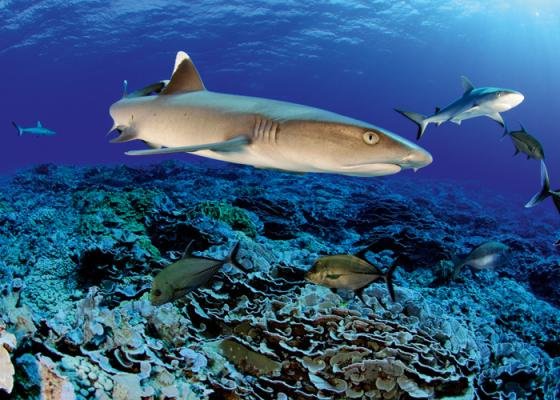 “From the beginning, our diving watches were also designed for women, with a reduced size that enabled them to be worn on land, as dress watches.”

What proportion of Blancpain’s sales are in ladies’ watches? AD: Around 20%. But I should point out that from the beginning, our diving watches were also designed for women, with a reduced size that enabled them to be worn on land, as dress watches.

“Our basic principle is to respect our retailers, who do a good job and are experts in the geographical zones they cover.“

How do you allocate your distribution between dedicated boutiques and retailers? AD: We have 40 boutiques. The first one opened fifteen years ago, and we opened nine last year. We’ve just opened one in London, to boost British sales. But we will be slowing down; we also want to let our retailers help with the overall effort. Our basic principle is to respect our retailers, who do a good job and are experts in the geographical zones they cover. In the beginning, some of them might perceive the arrival of a Blancpain flagship store as a threat. But I can guarantee that for every one of our own-brand stores that opens, there is a corresponding increase in sales among the nearby multi-brand boutiques, without exception. It increases the brand’s credibility locally and showcases watches that other retailers may not have in stock. 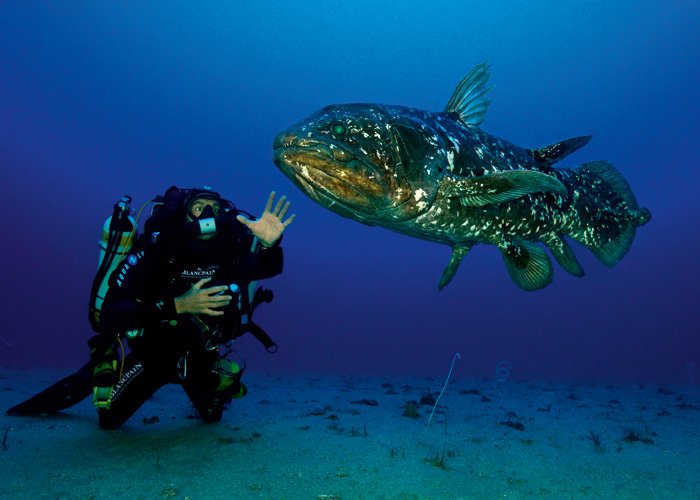 This underwater chronograph, at 43 mm in diameter, is smaller than the core models of the Fifty Fathoms Collection. It features the brand’s latest in-house movement, the F385, and a special grey ceramic case and blue dial and bezel. This entirely new column wheel controlled flyback chronograph movement runs at the high frequency of 5 Hz – 36,000 vph, ideal for a chronograph, as each second is perfectly divided into 1/10th of a second intervals. It uses silicon for the balance wheel spiral. Because silicon is amagnetic, it provides the same degree of protection from magnetism as constructions that rely upon a soft iron inner case. Unlike the horizontal clutch systems used elsewhere, Blancpain’s vertical clutch guarantees flawless starting and operation of the chronograph. 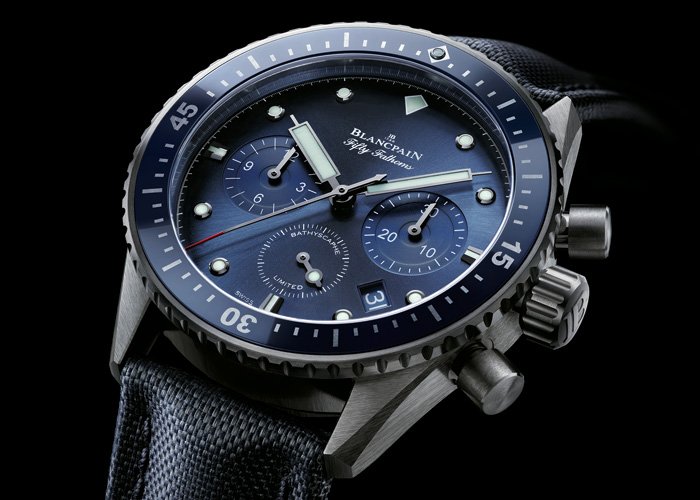 Two other features of this new timepiece bring important functionality to the world of diving. Unlike most diving chronographs, which paradoxically forbid chronograph use underwater and require that the chronograph pushers be ‘locked down’ when the watch is submerged, the Bathyscaphe Chronographe Flyback has been equipped with sealed chronograph pushers allowing use of the chronograph during dives to a depth of 300 metres. Second, the chronograph itself incorporates a flyback function. Whereas standard chronographs require three presses of the pushers to time back-to-back events (one push to stop the first event, a second to return to zero and a third to start the second event), the flyback function greatly simplifies operation. A single push of the return to zero pusher stops the first event, returns the timer to zero and restarts the timing for the second event. This is particularly useful for divers’ decompression stops.