by Pierre and Serge Maillard

by Pierre and Serge Maillard

Jean-Claude Biver, what a man! He’s already done it three times (Blancpain, Omega then Hublot) and he is doing it again with TAG Heuer, as well as playing the role of Zenith’s troubleshooter. We met around a plate of cheese at the Europa Star Arcade, because he also produces four tonnes of excellent Alpine cheese each year. 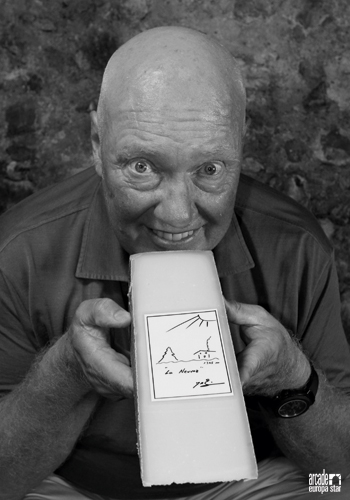 So many accomplishments… any defeats?

Of course, and one must respect the defeats. The biggest one was my divorce. One should never fail in love because this type of failure affects the next generations….

All I did was refocus the brand on its core business by breathing in new life and supporting creativity and research. TAG is affordable luxury with an average price of CHF 2,800. This is an extraordinary opportunity when you think that by 2020 there will be 3.5 billion people in the middle class. We target a young clientele, 20 to 30-year-olds and we are, luckily, almost alone in that category. We are our own competition. Of course there are other actors in this price range, but none who have an identity as strong as ours. TAG has always been profitable, and it will continue to be so more than ever. By the way, we are currently hiring at least twenty people.

How does the smartwatch you announced fit into this strategy?

With a starting price of CHF 1,100, we are potential targets and might get affected. So we might as well hop on the bandwagon, with Intel and Google. Together they’re capable of doing everything Apple can do, and maybe even more. For them, it’s a first step into luxury goods, for us, it’s an opportunity to offer more innovative and specific interfaces and interactions, some of them exclusive. There will be a broad range of optional functions and prices. TAG has platforms: Formula 1 racing with McLaren, celebrities with a certain Cara Delevingne, football… The smartwatch could be directly linked to these platforms. Are you a F1 enthusiast? Then get all of the exclusive info on the Grand Prix, etc.… And the same goes for football.

What about Zenith? There’s a certain feeling of hesitation…

At Zenith I assist and support, because with Aldo Magada [Editor’s note: CEO of Zenith] I already have a man on the ground. I play the role of a safeguard – the snow shed, we are in the Swiss mountains – and focus more of the early stages than on the results: strategy, industrialisation, product and marketing. The results are the logical consequences of the decisions made beforehand.For a long time Zenith has been hesitant, as you said. But the previous CEO, Jean-Frédéric Dufour, who is the current director of Rolex, had already put things back in order. Now, we have to ring the bells, to bring people in, to get their attention. The strategy is the exact opposite of TAG Heuer’s. The smartwatch is programmed obsolescence. Zenith, with its amazing, legendary El Primero movement is, on the contrary, trying to put eternity in a box. The philosophy is all mapped out: Zenith is “the artisan of eternity” (he laughs, he’s happy about his slogan…) Not bad, right? Or, we could also say “invisible visibility”. It’s a work in progress, but when the path is mapped out, the rest follows. All the decisions are taken and organised logically, coherently. (He pauses to think and slams his fist on the table.) Ah, “Mastering the invisible and eternal”, I like that….

TIME.BUSINESS Vacheron Constantin’s launch of the Fiftysix line at the latest SIHH had its name on everyone’s lips. This coincided with a generational change at the helm (...)

TIME.BUSINESS He’s faced with the daunting task of succeeding Georges Kern. We meet Christoph Grainger-Herr, the young new CEO of IWC who comes to the engineering brand (...)

TIME.BUSINESS The oscillator of the new Zenith Defy Lab, perfected by Guy Sémon, CEO of TAG Heuer and of the LVMH Watch Division’s R&D Institute, and his team of (...)