The Paris Belles Montres fair has changed direction since it was bought from Le Point by a trio of investors; it has now been merged with the Salon de l’Homme. Watches now rub shoulders with other masculine products and pursuits: cars, grooming, golf, even flying lessons. This change of concept was not unanimously welcomed by all brands. It’s not a pure watchmaking fair; it’s a fair dedicated to men’s accessories. Which include watches. 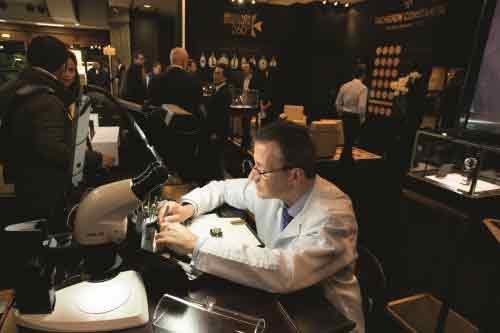 Nevertheless, there were some interesting discoveries to be made at the Carrousel du Louvre. The fair is a showcase for French brands including Pequignet, March LA.B, and the designs of Romain Réa, which go by such intriguing names as Hitchcoq and ZRC. We also took the opportunity to make a detour to the Place Vendôme to look in on jeweller Philippe Tournaire.

Interview with Jérôme Dernis, one of the new manager of Belles Montres 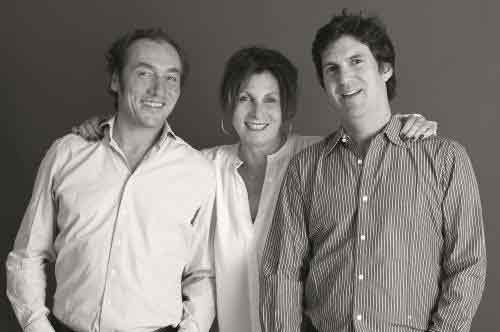 “IT’S MORE A POP-UP STORE THAN A FAIR”

The ninth edition of Belles Montres was also its first joint appearance with the Salon de l’Homme. Meeting with one of the new managers, Jérôme Dernis.

What is your new concept for Belles Montres?

Our idea was to create a huge pop-up store, rather than a conventional trade fair. After working in communication for the watch industry I co-founded the Salon de l’Homme, whose first edition took place last year at the Palais de Tokyo in Paris. The fair is dedicated to men’s accessories and masculine pursuits: music, bespoke tailoring, Formula 1 and flying. The only thing missing was watches! The watch is the only item of jewellery a man can wear.

It’s an antidote to the conventional trade fair, which is fairly boring and extremely tiring, where you run from one booth to another and don’t really take anything in. We wanted to create an anti-fair: a relaxed event that would be pleasant to visit. Many insiders told me they’d had enough of the traditional trade fair concept, which was too technical. We’re not just targeting collectors, we’re targeting all watch buyers. That’s why we have such a broad spectrum of brands and models, from the G-Shock to Vacheron Constantin. It’s a reflection of reality: we don’t wear just Armani suits, we also own a pair of Nikes! The modern man has a number of faces. We don’t take sides!

What has been the watch industry’s reaction to these changes?

They didn’t all understand it at first, but it’s the start of a new adventure! We’re going through a transitional period. Prestigious brands such as Zenith turned up, and we had some special moments, such as when Jean-Claude Biver came to sign copies of his biography. I think that the watch brands will eventually understand our intention, which is to offer something a bit different.

Last year we had fifty watch brands; this year, we’ve had around a hundred exhibitors in total, including some thirty watch brands. What you need to understand is that watchmaking is one element of the Salon de l’Homme, it’s one niche, which represents nearly a third of the event as a whole. There’s been another important development: previously it was an exhibition fair, but now we’re encouraging direct sales, and I hope all the brands understand this message. That’s where our future lies.

What is your maximum capacity?

We can accommodate another thirty or forty additional exhibitors. After that, we close the doors!

It was unfortunate that the fair took place so soon after the tragic attacks in Paris.

Many visitors decided to stay away from Paris, and not to visit the Louvre. Clearly, it was extremely damaging. Our visitors are French, for the most part. Paris’s luxury hotels were only 60% full. The Chinese in particular decided to stay away. Wealthy people are keen to avoid being in the wrong place at the wrong time!

What recommendations would you make to exhibitors for next year?

Don’t hesitate to make direct sales. And also perhaps to bring with them a more focused selection: fewer models, but with some new pieces, or watches on a particular theme. I think that will make it easier to capture visitors’ attention. We will also be building more bridges between watches and cars, which have very close ties. 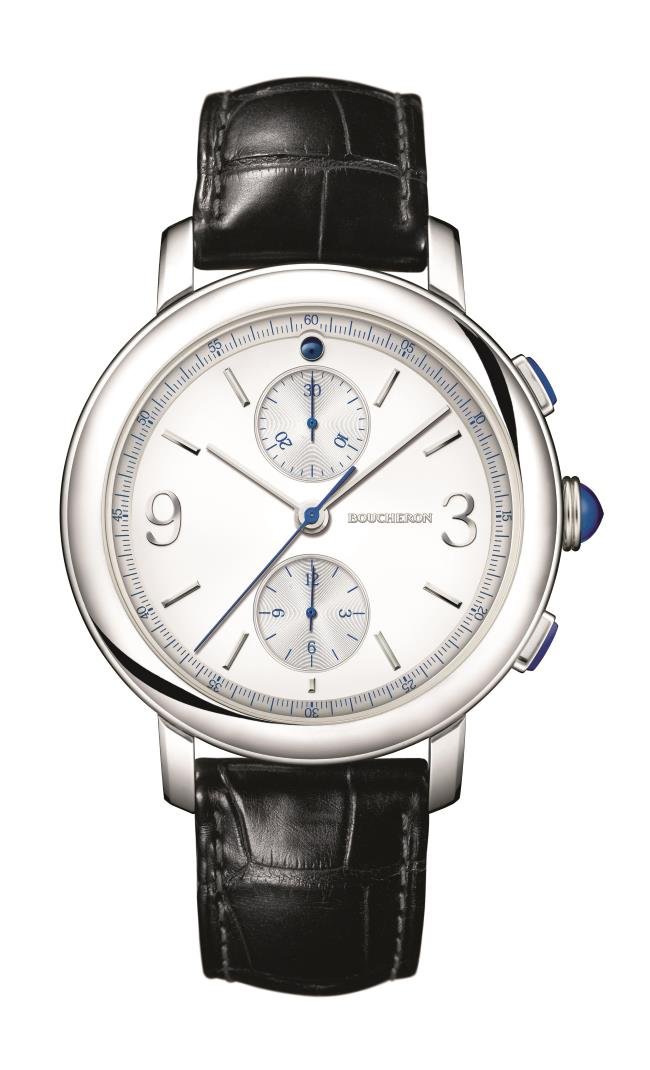 TIMELESS ELEGANCE
The jewellery and watchmaking Parisian house presents a new collection: Epure, whose name is self-explanatory in terms of the intentions of the brand! Available in pink gold, white gold and steel, featuring a chronograph and even a tourbillon on one model, the collection will appeal to customers looking for timeless elegance. The oversized numerals are a reference to the opening year of the Boucheron Boutique in Place Vendôme in 1893. 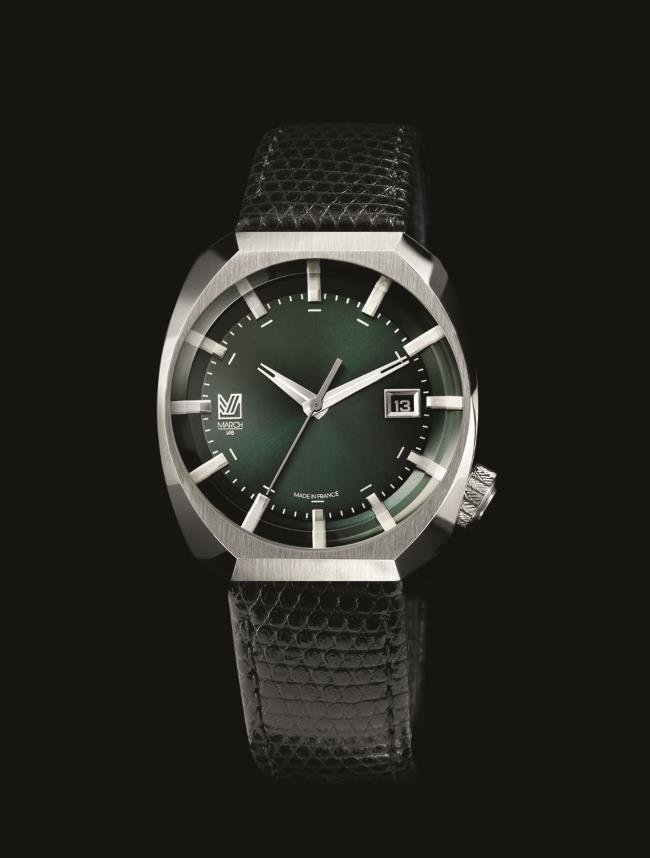 BACK TO THE 1970S
March LA.B is a France-made brand with headquarters in Los Angeles, California, and Biarritz, France, whose watches are rooted in vintage inspiration. March LA.B introduces its boldest timepiece to date: the AM3. Inspired by muscle-car culture, this quartz model features a cushion case straight from the 1970s. With its deep green dial, the AM3 Electric Forest is particularly appealing. 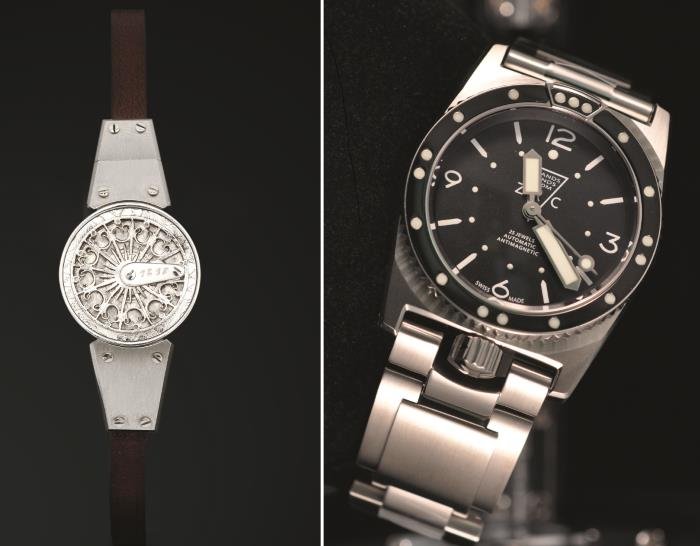 FOCUS ON
On the one hand, Hitchcoq, created by Parisian watchmaker Romain Réa, uses the ‘coq’, balance-cocks from the 17th and the 18th centuries designed to protect the balance wheel, in its stunningly unique bracelet designs. And on the other, we see the revival of the historic diving watch brand ZRC, under the impetus of the Brunet brothers. The 300 Grands Fonds is a reworking of the iconic GF300 from the 1964 3rd GPD or French Navy Mediterannean Mine Clearance Group, with the crown at 6 o’clock. 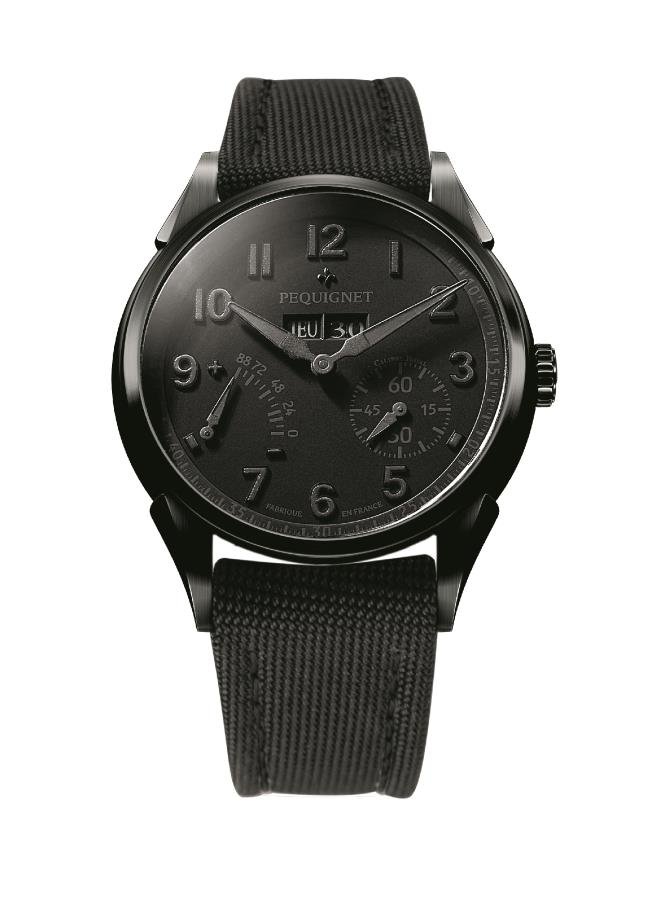 OVER TO THE DARK SIDE
All eyes on... the Royale Titane Fantôme limited edition by the French manufacture Pequignet created exclusively for the famous Parisian store Colette. This watch is the darkest ever made by the brand: in short, it is black, all black and nothing but black! A pure marvel, both aesthetically and technically, with small seconds at 4 o’clock, power reserve at 8 o’clock, big date and the homemade automatic Calibre Royal inside. 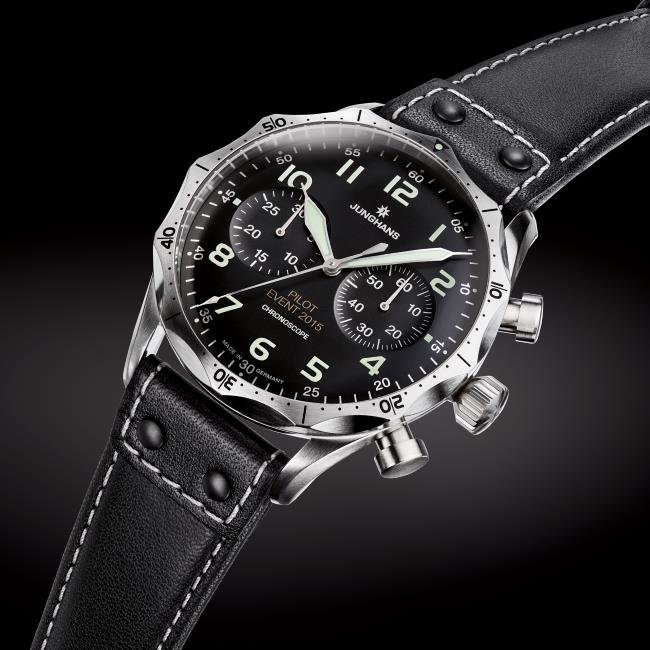 READY FOR TAKE-OFF!
Junghans is not just about Max Bill! The German brand proves once again his wide spectrum of creativity with the new Meister Pilot model, which was first presented last September and will be launched on the markets as of 2016. The brand is no new player on the airfield: in the 1930s, the Schramberg-based company was already producing on-board clocks for aircraft. This tradition followed with the legendary  Junghans Bundeswehrchronograph of 1955, developed for the West German military. The new Meister Pilot incorporates the key design elements of the Junghans pilot watch of the 1950s, combined with the soft and stylish forms of the current Meister collection. It enables secure orientation even in poor lighting conditions and at night. Several elements emphasize this “clarity”, which seems the motto of the model: a large time display; a double-sided, domed sapphire crystal; clear luminescent numerals; distinctive hands... The dial features a bicompax chronoscope, the two totalisers of which are laid out on the 3-9 axis. The 12 distinctive lens-like recesses on the bi-directional rotating bezel also guarantee good grip. To sum it up, the Meister Pilot model fully honours its historic its historic predecessor, both aesthetically and technically. This watch is definitely ready for a safe take-off! 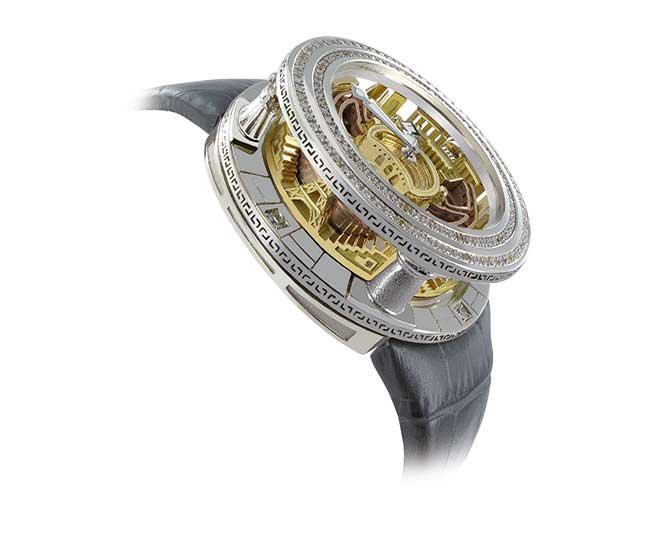 Excursion chez Philippe Tournaire
In 1984, the self-taught jeweller Philippe Tournaire set up his workshop and his first store in the Loire Valley. Today his boutique looks out onto the world-renowned Place Vendôme. What a story! Working closely with his son Mathieu, the jeweller is particularly revered in China, where his French Kiss collection (featuring a reversed Eiffel Tower) is highly praised. On the watchmaking side, Philippe  Tournaire is best known for his crazy masterpiece, created in collaboration with Technotime, which illustrates his architectural approach to his own craft: the Paris Forever watch. This TT791.50 Architecture calibre, a 60 second tourbillon with a double barrel and 5-day power reserve, showcases the French capital city through its various monuments, from the Trocadero Gardens to the Louvre via the Académie Française, the Pont Neuf, the Eiffel Tower and the Arc de Triomphe, all of which are functional elements of the watch. As the watchmaker puts it, Paris wasn’t built in a day: in this case it took 18 months!