Wheels on the ground and pedal to the metal describes the efforts regarding land-based sports watches. As an example, Tissot, the official timekeeper of MotoGP, introduced a new T-Race Moto GP Limited Edition. 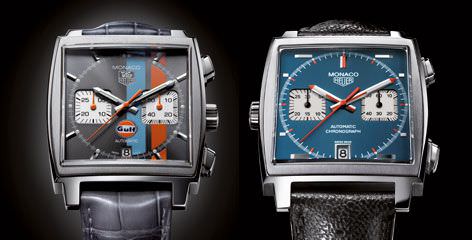 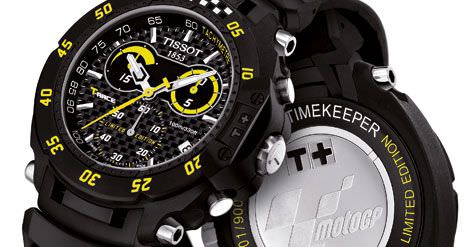 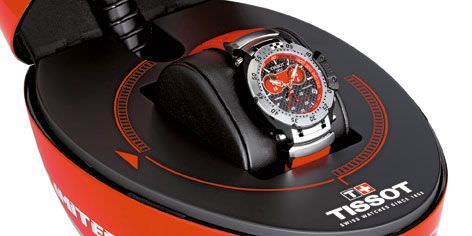 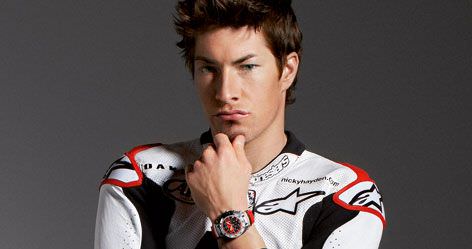 Earth
Wheels on the ground and pedal to the metal describes the efforts regarding land-based sports watches. As an example, Tissot, the official timekeeper of MotoGP, introduced a new T-Race Moto GP Limited Edition, a Nicky Hayden Limited Edition T-Race and a Thomas Luethi T-Race Limited Edition. 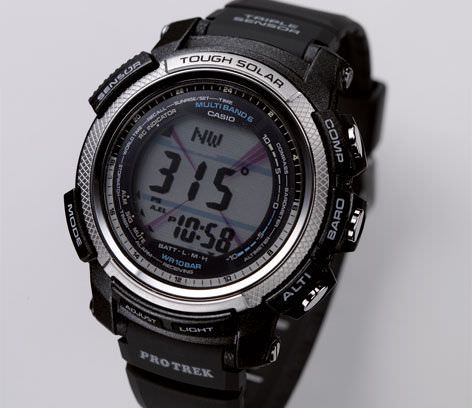 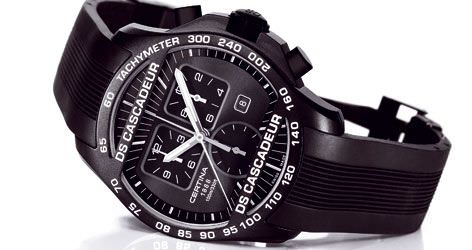 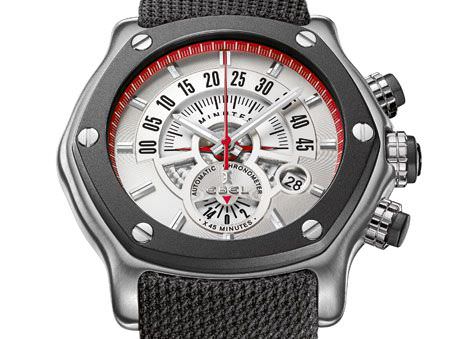 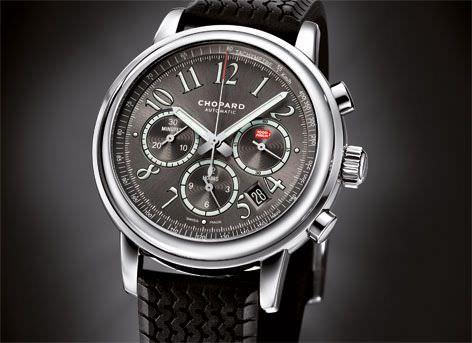 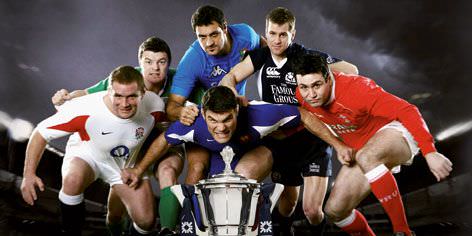 
Casio debuted two incredibly thin (11.3mm) outdoor watches in its PRO TREK series, the PRW-2000 and the PRW-2000T. Both have triple sensors - compass, barometer/altimeter and thermometer - along with radio-controlled technology capable of receiving standard radio waves from five transmitters around the world.
Certina is the only watch company I know that has a partnership with a stunt man – the watch is the DS Cascadeur (French for stuntman) and the stuntman is Oliver Keller, a Swiss national who lives in Hollywood and has worked on such movies as Spiderman, Pirates of the Caribbean, Master and Commander, Star Trek: Nemesis and the television series Crossing Jordan, 24 and CSI: Miami. A quartz chronograph, the DS Cascadeur promises to be as rugged as Keller himself. Also introduced at BaselWorld from Certina was a limited edition watch for the BMW Sauber F1 team (Certina is a sponsor).
Following the success of the football-themed limited edition chronographs (Arsenal FC, FC Bayern Munich and more), Ebel has finalized its relationship with the famous Dutch club AFC Ajax, introducing the 1911 Tekton Ajax Automatic Chronograph. The watch is powered by the Ebel Calibre 245 automatic chronograph movement, dedicated to football with indications of the 45 minutes halves and injury time.


Chopard again debuted new regular line Mille Miglia watches, the 1000 Miglia GT XL Chrono Speed Black and the 1000 Miglia GT XL Chrono Titanium, and unveiled a 1000 Miglia Chrono Limited Edition 2009 (2009 pieces).
Graham has become the official timekeeper of the 6 Nations Rugby Championships. As part of this sponsorship, Graham provided all Royal Bank of Scotland, RBS, 6 Nations match ref-erees with Graham chronographs. To pay tribute to this event, the Chronofighter Oversize Titanium Tackler watch was introduced in BaselWorld. In addition, Graham is also the official timekeeper of the Isle of Man TT, perhaps the most famous motorcycle race in the world.
Hanhart, based in Diessenhofen, Switzerland, has a complete line of chronographs called Primus, all with Hanhart trademark’s red pusher. Three models make up the Primus collection – Racer, Pilot and Diver. 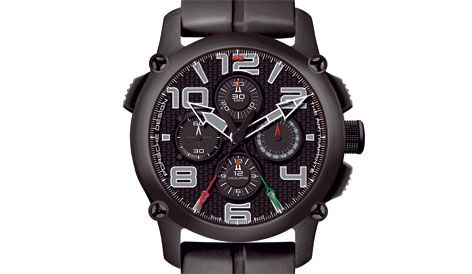 
Porsche Design, in partnership with Eterna, presented the P´6920 Rattrapante Chronograph with a mechanical movement, which will be available in a limited edition of 250 timepieces. The watch, in a 45mm PVD-coated titanium case, is water resistant to 50 metres.


Classical yet sporty
Classical was a trend at BaselWorld this year, as well. Some of the new classic watches had a decidedly sporty design to them, often incorporating chronographs.
One very traditionally styled watch is the David Yurman chronograph, called the Classic. Watch designer Evan Yurman, David’s son, really got this one right.
One of the most exciting developments at BaselWorld was the introduction of a new automatic line, called Ananta, from Seiko. Having visited Seiko’s facilities in Japan, I know first hand that Seiko is one of the most legitimate manufactures in the watch industry, on par with the Swiss, and I always wondered why the company’s great mechanical watches were not available worldwide. Now, they are. 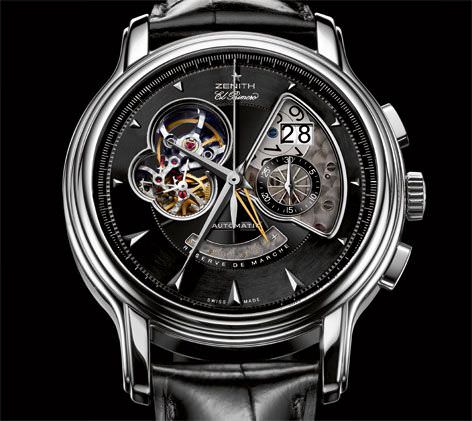 
Zenith, after several years of establishing and developing its Defy series, which combines high watchmaking with cutting-edge design and new materials, is back to concentrating on its core range of classic watches. This year also marks the 40th anniversary of the legend-ary El Primero chronograph movement. One of my favourites to utilize this movement, the Chronomaster Open, debuts this year with a very attractive Grande Date Moon and Sunphase execution.
Last year at Basel Carl F. Bucherer, introduced the brand's in-house movement, the CFB A1000, developed completely by its subsidiary Carl F. Bucherer Technologies, located in Sainte-Croix, Switzerland. This year, the brand is introducing the first watch to utilize this new movement, the Patravi EvoTec DayDate. Though in the Patravi collection, CEO Thomas Morf decided to use a different case, a cushion that has been used before in the Patravi line for the EvoTec Day Date.
Perrelet, the inventor of the automatic watch, introduced a really cool, sporty watch called the Turbine, which combines a classic design with an intriguing dial that looks like a turbine engine (the brand’s trademark double rotor is transformed into a ‘turbine’ via 12 blades made of titanium. 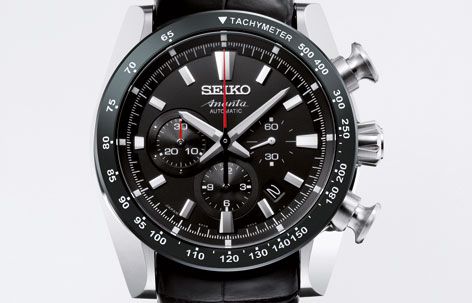 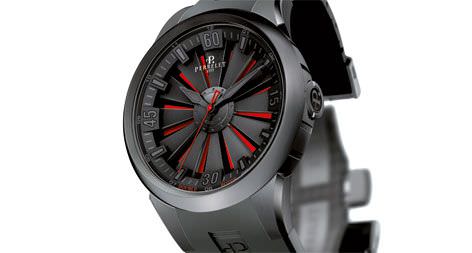 
This year, BaselWorld, despite the economic downturn and the generally depressed mood, was exciting for the amount of new sports product introduced. These watches were not pie in the sky watches, for example tourbillons able to dive down to the Titanic, out of reach of most people, but were sports watches that were designed for real people and to be worn everyday.
Thank goodness.


This is part three in a four part series