A little under ten years ago, in 2005, Maurice Lacroix took a strategic decision to vertically integrate its production with the aim of becoming a fully integrated manufacture, a decision whose significance was bolstered by the Swatch Group’s announcement that it would progressively reduce its movement deliveries. Faced with this “threat”, people had to react and it was with this progressive autonomy in mind that the decision was taken to strengthen the brand’s in-house share of its manufacturing.

But one of the consequences of this strategic choice was an increase in the average price of Maurice Lacroix timepieces, which grew progressively from 2,700 Swiss francs to around 5,000. Huge investments in communication in all its forms accompanied this strategy, in particular regarding what was to be a genuinely revolutionary piece, the Mémoire1. But it was, alas, very complicated to develop and the model that was announced with a fanfare and was set to be the standard-bearer of the new strategy never saw the light of day. In 2008, spurred by the financial crisis, Maurice Lacroix therefore decided to review its own strategic choices. The CEO Philippe Merk left the company to join Audemars Piguet. Martin Bachmann took the helm at the start of 2009.

From this point, Maurice Lacroix decided to focus above all on the 1,000-5,000 Swiss franc price segment but at the same time offer highly relevant and innovative talking pieces in a price range between 2,000 and 12,000 Swiss francs. The Roue Carrée is a perfect example, as is this year’s astonishing Seconde Mystérieuse. These ambassador pieces have the great advantage of perfectly conveying the style of watchmaking that Maurice Lacroix aims to promote: a remarkable style that is architectural, easily recognisable and shares its references with classic horology and graphical modernism. 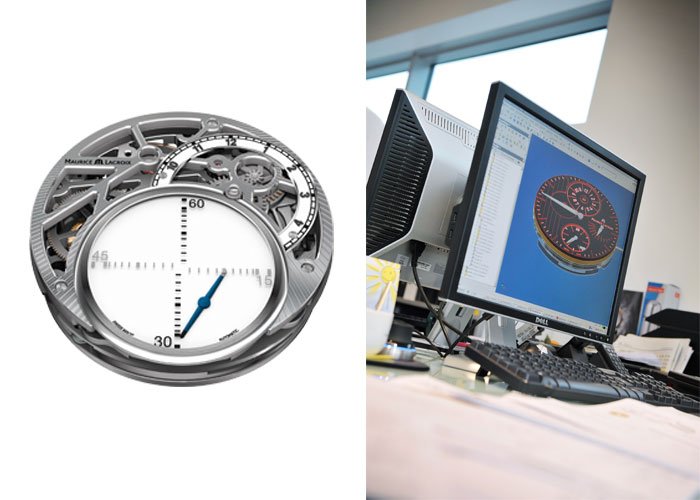 Left: The movement of the new Masterpiece Seconde Mystérieuse

In 2011, DKSH, a leading “market development services” group, which employs over 22,500 people in 610 subsidiaries (including 590 in Asia) spread across 35 countries and is one of the top 20 Swiss companies by turnover and workforce size (8.8 billion Swiss francs in 2012) took a majority share in Maurice Lacroix. Martin Bachmann stepped down and Marc Gläser, who had held various posts at Maurice Lacroix a few years earlier, took on the new post of managing director.

In the eyes of Marc Gläser, “there are a great opportunities in the 1,000 to 5,000 Swiss franc price segment. There is a huge potential, all the more so given that this segment has been abandoned somewhat by a number of Swiss brands. We have a firm intention to take a leading position in this segment,” he explained to Europa Star. “Our strength is the unique positioning of our collection. But we have not yet achieved the notoriety that we should logically have. We are working on this and now our strategy is stable for the next five to ten years. We have great prospects,” he stresses, without boast but with solid assets in his hands. These assets are not just the commercial power of DKSH in terms of distribution, especially in Asia (Maurice Lacroix produces 90,000 watches per year and has 3,000 points of sale) and the stylistic clarity of the product range but also the manufacturing strength, which, although not fully vertically integrated, is very intelligently organised. 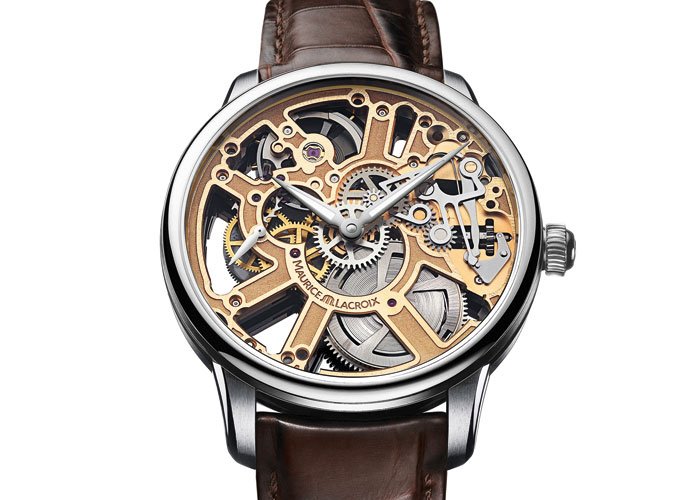 The watchmaking set-up around Maurice Lacroix can thus count on three separate manufacturing entities that are perfectly complementary to each other, all three based in Saignelégier, in the Swiss Jura: Maurice Lacroix SA develops movements, finished watches and does the assembly and casing up; the Manufacture des Franches Montagnes (MFM) produces the majority of components for the Maurice Lacroix in-house movements and Queloz is a high-end watch case manufacturer. Both MFM and Queloz work for Maurice Lacroix as well as third-party brands (that are by no means small fry).

In an entirely renovated building, the Maurice Lacroix parent company is built around one core activity: assembling movements and watches. You will not find any “shavings” (the French expression “copeaux” that industry insiders use as an analogy for component production) here. All the machining is sub-contracted to a number of suppliers in the Jura, with the exception of the in-house movements, for which the components come exclusively from the sister company MFM. There are currently 12 of these 100% manufacture movements, for a total of 3,000 pieces each year, out of a total of 90,000 movements (of which half are quartz). These manufacture movements are designed and developed entirely in-house in an R&D department that employs ten watchmakers, constructors and analysts. The detailed plans, tolerances, technical plans, machining plans, tool development, task lists, processes and assembly sheets are developed in this unit, which also checks movements bought in from outside (only Swiss Made and mainly ETA or Sellita for the mechanical movements). Grouped together under the name “Masterpiece”, these twelve in-house movements include, among others, the ML 106 integrated chronograph movement and its ML 106-7 skeleton version, the ML 150 retrograde calendar, the double-retrograde ML 151, the “square wheel” movements ML 153 and ML 156, the retrograde moon phases ML 152 and ML 192 and the more recent ML 215 movement with the mysterious seconds, which was presented at BaselWorld this year and for which the 250 pieces were immediately sold out.

These in-house movements, as well as the in-house complications (such as the Pontos excentrique) and complications from external suppliers such as Dubois-Dépraz are assembled entirely at the workshops in Saignelégier, which employ a hundred qualified staff. Depending on their complexity, these movements are assembled either on semi-automatic production lines or entirely by hand. Here, therefore, every effort is made to ensure optimal assembly and casing-up operations, as well as the different tests carried out at all stages (at the end of the line, all the watches pass through a testing office where mechanical watches undergo five days of tests and quartz watches undergo three days of tests). 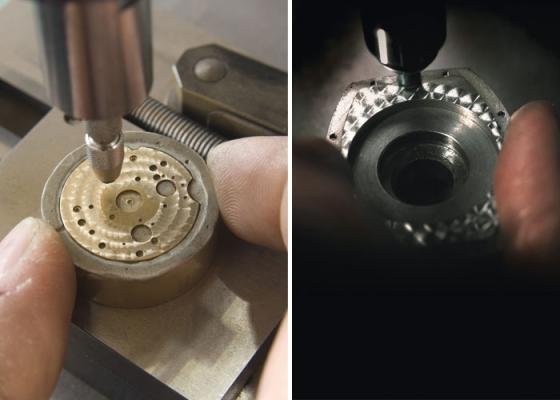 The heart of this assembly unit is the central warehouse, where 25 tonnes of components are housed in stacks two storeys high. This stock is managed entirely by computer and the highly advanced system allows Maurice Lacroix to react very quickly to the markets by matching production to demand “in real time”. Each watch has its own unique serial number, which ensures perfect traceability of each product.

Nearby, the Manufacture des Franches Montagnes (MFM) was established in 2006 and produced its first components in 2007. To start with, MFM worked exclusively for Maurice Lacroix. Today, three-quarters of its production is for external customers (mainly prestigious brands). MFM’s specialities are profile turning and milling, or indeed a combination of the two that can produce pinions to within a tolerance of a few microns on a single machine that does the profile turning and milling for the teeth at the same time. This represents a considerable saving in both time and production cost.

The organisation of MFM is especially interesting. Each operator works on a specific project for which they are responsible from beginning to end. The machine operators receive the plans for a component, do simulations on a computer, then transfer the programme they have created to the production machines and test the tools before production is started. This process takes about a week in the case of mainplates. Before the production proper is launched, the first mainplate is checked down to the finest detail before being validated. For Maurice Lacroix, MFM produces all movement components except the escapement. The workshop is still dependent on outside suppliers for these moving parts but intends to achieve 100% vertical integration soon by installing the capacity to burnish components. The finishing operations are also carried out here: trimming, filing the attachments, bevelling and polishing.

Also established in Saignelégier, Queloz is a high-end watch case manufacturer specialised in complex cases and able to produce series of up to 1,000 pieces for the most simple cases, or 300 (or even single pieces) for complicated gold cases. They use materials such as steel, gold, palladium, platinum, tantalum, titanium and titanium alloys up to Grade 5. Examples of the manufacturing prowess of Queloz are the highly complex case of Harry Winston’s Opus XI (whose asymmetrical case middle is made from a single block) and the X Watch by De Witt with its 180 polished and micro-blasted titanium components.

Queloz masters all the operations involved, including construction, technical plans and modelling. It even makes its own gold ingots, all its tools, has powerful presses, milling machines, an impressive park of five-axis machines, decoration, grinding, brushing and polishing workshops. In short, an impressive and very high-quality capacity that completes the overall production capacity of Maurice Lacroix.