In the Swiss Pavilion, don’t look for Vacheron or for Constantin… The brands presented here are small independent Swiss factories, unknown by the general public and who, like Amarildo Pilo, are directly targeting the Chinese market. The president of Pilo & Co Genève, who initiated the project, explains the concept and challenges. 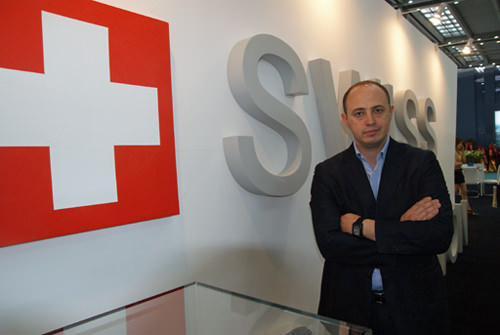 Europa Star: Can the Swiss Pavilion open the doors to the Chinese market?Amarildo Pilo: The idea is to provide a platform for the independent watchmakers who have different or complementary products. Our pavilion is the very picture of a small Swiss village, inhabited by real local watchmakers, inspired by the “boutiques” in Hall 5 of BaselWorld.

ES: What advantages are there over the fair in Hong Kong?AP: Hong Kong does not have adequate reception facilities for small independent Swiss brands and above all, distributors and exhibitors know exactly what they want. In Shenzhen, the participant directly faces the Chinese distribution network. It is also much more affordable, since participation in the Swiss Pavilion costs only 6800 Swiss francs – flight, hotel, booth and support included!

ES: So participants come here to find a Chinese distributor?AP: Absolutely! There are two fundamental questions: are the distribution networks ready to accommodate small independent Swiss brands, and are the brands willing to window space with Chinese brands? Because in terms of price, they are not at the same level.

ES: Shenzhen is Mainland China, Mandarin is mostly spoken, sometimes Cantonese, rarely English...AP: Each exhibitor gets its own interpreter, making contacts quite easy. I have been in this market seven years and already have several outlets. That’s why, now, I want to give to other small brands a hand.

ES: Possibly by offering your own retail outlets?AP: No, because in China, Pilo has its own brand shops. On the other hand, small brands urgently need to support each other because today’s winners are the watch groups. While remaining independent, the small brands should learn from each other and group together. The Swiss Pavilion is already a kind of group with some bargaining power.

ES: How many participants for the next edition, in 2013?AP: Twice as many! It is almost the case in the second edition, but the problem is that the independent watchmakers are still afraid to launch in China directly. They are just workers behind the scenes, not so used to being exposed. Here, suddenly, they find themselves face to face with the customer and for some of them, this commercial approach may be too bold. 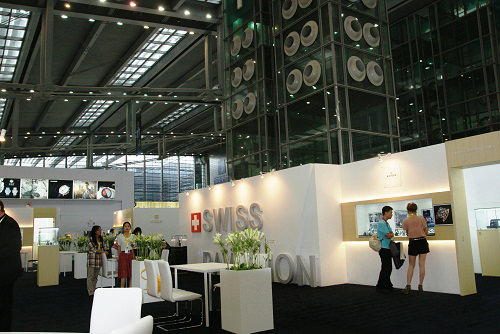 The Swiss Pavilion at the Shenzhen Watch Fair

ES: With their rise, are Chinese brands emerging as your new rivals?AP: Small Swiss brands first suffer from the restrictions in supply of ETA movements, which forces them to either die or go up-market. That’s why we are losing the mid-range market, which is nevertheless still very important for the Swiss industry. It is the independent brands that are first to suffer from the restricted supply of ETA movements, because they only produce small volumes. It has also doubled our prices, which means that we can no longer compete with Tissot and Certina of the Swatch Group. This directly benefits the Chinese watch industry.

ES: Is the Chinese threat a bigger one than the Japanese one thirty years ago?AP: It is very different. Japan evolved at a different time, with simple “three-hand” movements, with convincing quality. However, the Japanese watch industry never launched complications, unlike the Chinese today. Their mechanisms are increasingly sophisticated and are developing very fast. As for the powerful Swiss groups, they have the capacity to develop complications and monopolise the high end.

ES: In the future, will small watchmakers be tempted to use Chinese complications as a technical base? TAG Heuer already did it with a Seiko calibre...AP: Personally I am against this in order to protect the Swiss industry, but mainly to protect innovation. Don’t forget that the innovation comes largely from small watchmakers. Closing off the system therefore kills innovation. Finally, Sea-Gull and other Chinese companies have realised that making good quality complications for a good price opens up new potential. For Switzerland, the complications are inevitably very expensive.

ES: The solution?AP: ETA must step back and release the restrictions on movement supply. Swiss watches are popular all around the world, why close the doors?

ES: Meanwhile, is there a risk of abuse?AP: For ten years, groups with enormous financial resources such as Dolce & Gabbana, Guess and Armani have been making “fashion” watches using only Chinese movements. They are the ones who are taking advantage of the situation, not the Swiss watch industry or the independents.

ES: A world of “brands”?AP: Yes but beware, “brand” doesn’t mean “Patek Philippe”, but those who do advertising, marketing and sell their image.

ES: With the Swiss Pavilion, is the resistance getting organised?AP: In the future, we could imagine worldwide shops and exhibitions of independent watchmakers. With small independent brands, clients find small series, unusual and authentic watches.

“Three or four promising contacts in one day” Nicolas Voyame, of the brand Evilard Watch, participated for the first time at the Shenzhen watch fair.

“Evilard Watch was created by my great-grandfather in 1948 and stopped by my grandfather in the 90s due to the lack of a successor. But he kept the company hoping that one day I could take it over. That’s what I did two years ago, at the age of 27.”

At his workbench, the young man is driven by passion. “Our annual production is 500 watches with limited editions of 100 pieces. All dials are handmade, using precious metals such as ruthenium, rhodium and black gold and with sunray brushing. Our movements is a totally reworked ETA with circular graining and bevelling.”

Thanks to the Fair in Shenzhen, the small brand has high hopes for expansion. “After the first of four days, there are already three or four potential contacts that must be followed up, of course. I would advise other independent Swiss to come here, because it allows them to better position their products on this market. Especially since it’s quite affordable and the support is perfect, I even received the workbench that I asked for.”