India will likely become the most populous country in the world by 2027. This stunning growth is not yet reflected in the watch industry, due to historical protectionist measures, a complex business environment and considerable economic disparities. India’s largest luxury watch retailer, Ethos, is nevertheless laying the groundwork and lobbying for change. In less than two decades, it has already disrupted the Indian watch market. We met its founder, Yasho Saboo.

India will likely become the most populous country in the world by 2027. This stunning growth is not yet reflected in the watch industry, due to historical protectionist measures, a complex business environment and considerable economic disparities. India’s largest luxury watch retailer, Ethos, is nevertheless laying the groundwork and lobbying for change. In less than two decades, it has already disrupted the Indian watch market. We met its founder, Yasho Saboo.
I

t’s interesting to look at the Indian watch market from the perspective of its largest luxury watch retailer, Ethos, which operates 54 stores in the country. The national leader is not even 20 years old: Chandigarh-based entrepreneur Yasho Saboo founded it in 2003. Ethos rapidly established itself, positioning itself strategically in a market that has transformed utterly since the turn of the new century, although it remains relatively small in terms of Swiss watches, with CHF 150 million in exports last year.

This national leader is not even 20 years old: Chandigarh-based entrepreneur Yasho Saboo founded it in 2003.

An important feature to note about India is its historically protectionist stance, a major factor in building the nation’s economy since it gained its independence in 1947. It helps to explain how a homegrown company, Tata-owned Titan, completely dominates the entry-level watch segment in India, with sales at about 340 million dollars in 2018-2019. According to The Economic Times, the company sold around 16 million watches in 2018, including brands Titan, Sonata and Fastrack. It also owns Swiss brand Favre-Leuba (read our interview with CEO Vijesh Rajan here). 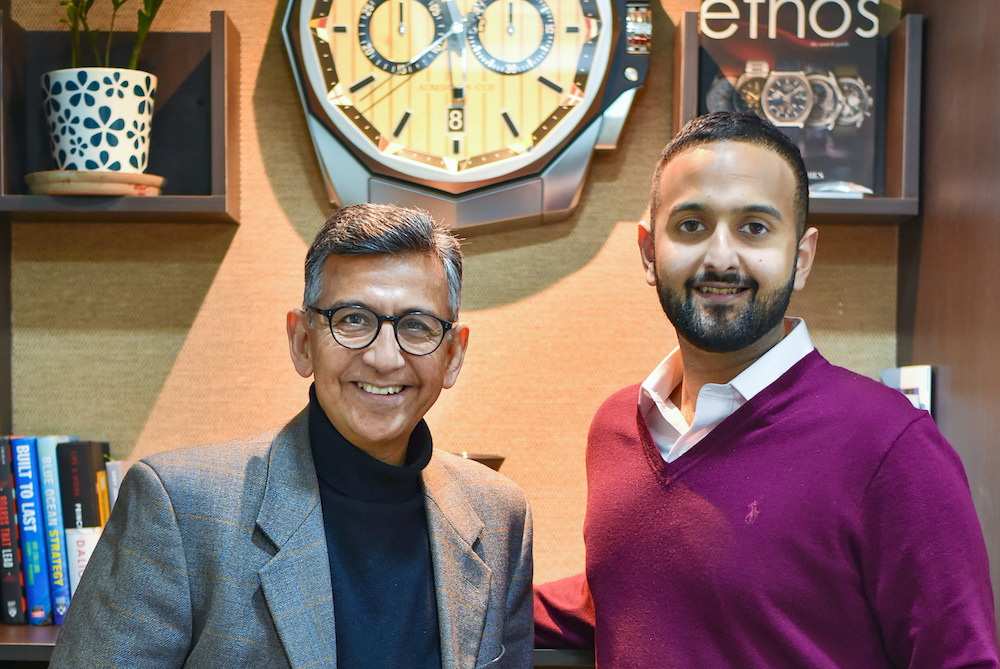 From supplier to retailer

“The year 2000 was a turning point for the Indian watch market, as the government started to open the door to the import of luxury watches on a larger scale,” says Yasho Saboo. “Before that, it was difficult to sell watches above 1,000 dollars without resorting to smuggling or the grey market.” Having founded a watch part manufacturing company called KDDL in 1983, the entrepreneur seized the opportunity to diversify and invest in watch distribution. He soon realised, however, that the real growth was to be found in retail rather than distribution.

In 2003, Ethos opened its first luxury watch store in Chandigarh, where the company is based. Chandigarh is a “new city” with strong ties to Switzerland: it was planned by the famous architect Le Corbusier, who was born in La Chaux-de-Fonds, following the independence of India in 1947. From the outset, Yasho Saboo made no secret of his ambition to go nationwide, expanding into a network of stores throughout the country.

“The year 2000 was a turning point for the Indian watch market, as the government started to open the door to the import of luxury watches on a larger scale.” 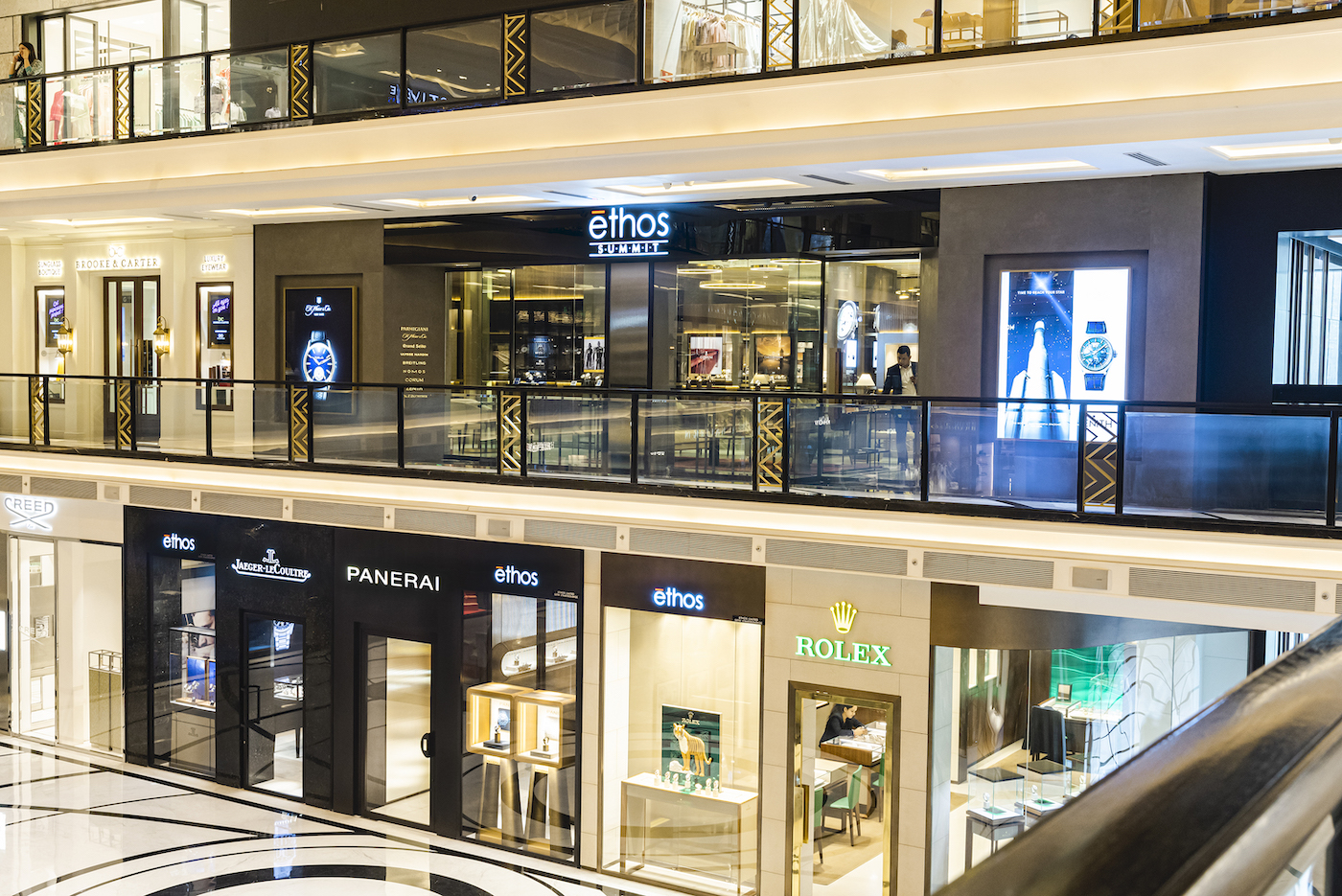 The Ethos store in Chanakya

The entrepreneur put his plan into action, building on the country’s new consumption habits and the opening of luxury malls. “My vision was that the quality of the stores had to evolve in India to reach the standards seen in Dubai or London,” recalls Yasho Saboo. “The malls offered a brand new opportunity. We were lucky because the major Indian watch retailers didn’t want to invest in malls, as they deemed them too expensive. As a result, although we were a new player, we managed to open watch stores in key malls in India.” Another important growth factor for Ethos was the modernisation of the country’s airports, favouring expansion through travel retail and duty-free shopping.

“We were lucky because the major Indian watch retailers didn’t want to invest in malls, as they deemed them too expensive.” 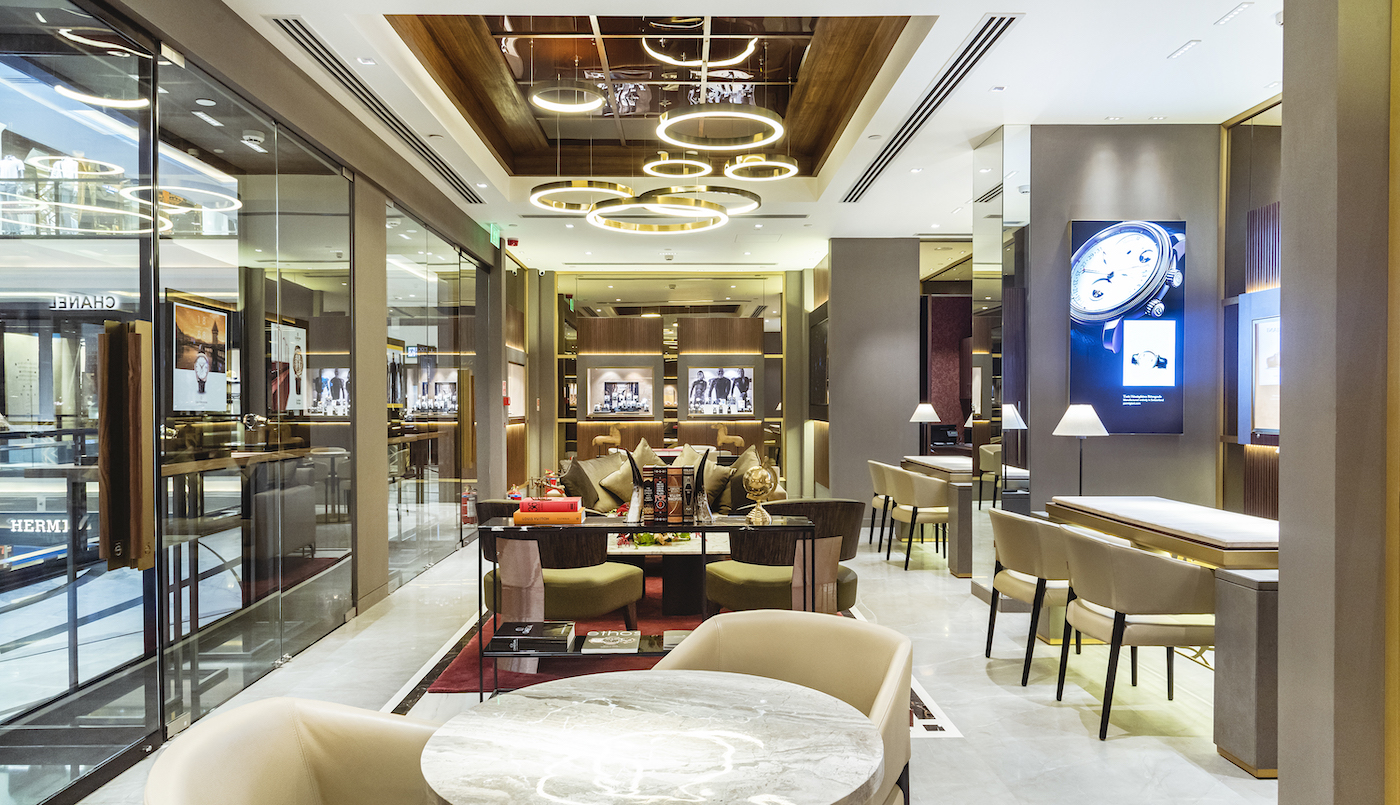 While Ethos began by representing mid-range brands such as Rado, Longines, Tissot and TAG Heuer, it became a major beneficiary of this change. As a new player expanding through India’s modern malls and airports, it offered the kind of prestigious presence the luxury Swiss brands were looking for. Gradually, the company started adding high-end watch companies to its portfolio, including Omega, Jaeger-LeCoultre, Hublot and Cartier.

Another important turning point would come in 2008, through a partnership with Rolex. “We set up their first boutique in Bangalore,” explains Yasho Saboo. “It brought us more luxury customers and we were also more confident in our growth strategy.”

As a new player expanding through India’s modern malls and airports, it offered the kind of prestigious presence the luxury Swiss brands were looking for. 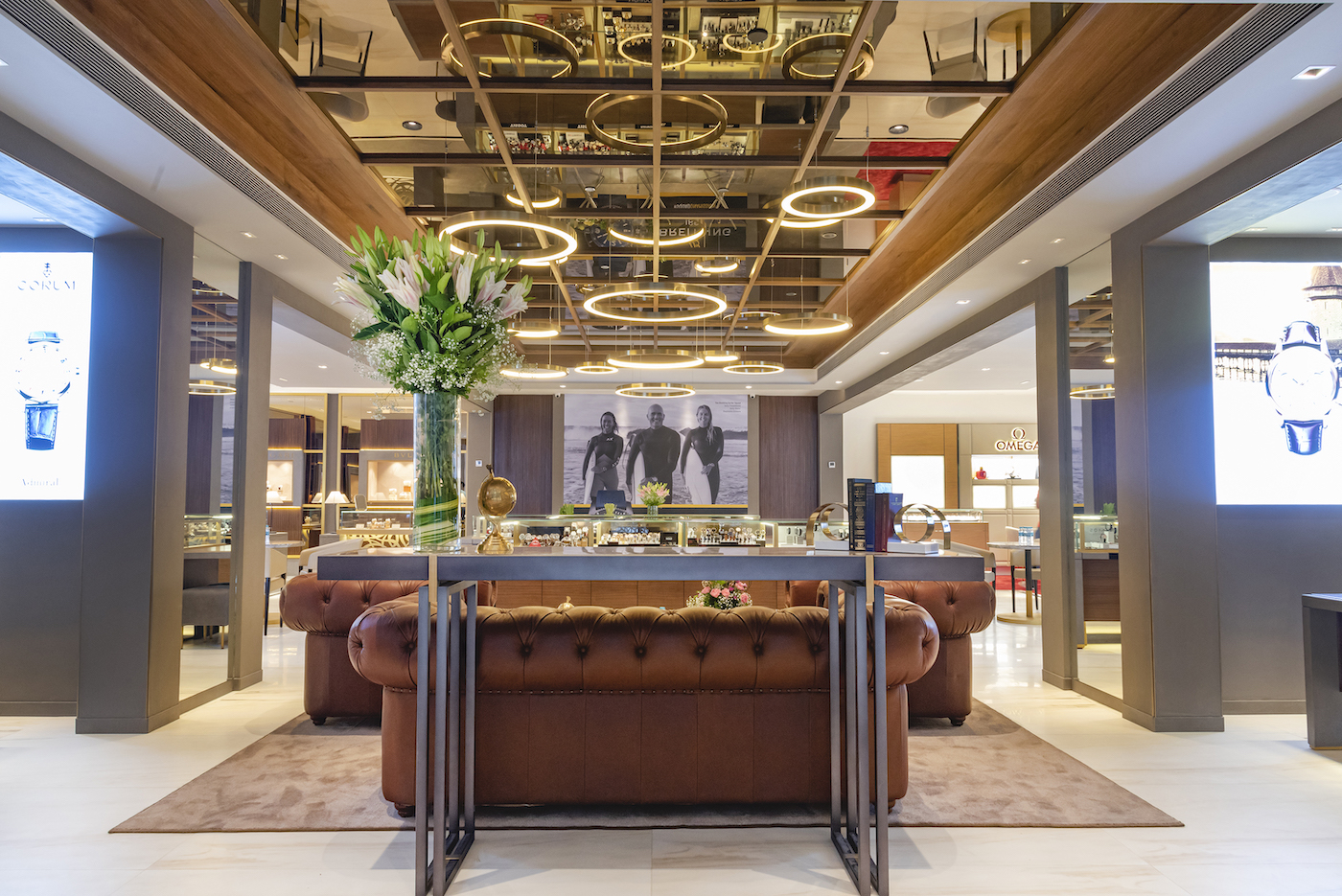 The Ethos store in Kolkata

A major recent shift for Ethos has been the launch of an e-commerce platform, under the impulse of the second generation to head the company. “Last year, my son Pranav took over as CEO after three years as Head of Marketing. We implemented a new digital strategy and our marketing spend shifted from 100% offline to almost 100% online. We set up call centres and a loyalty programme around our digital platform.”

Online sales comprise mainly watches priced under 500 dollars, and e-commerce accounts for 5% of Ethos’s turnover. Yasho Saboo sees it primarily as a marketing tool to attract customers to the company’s network of brick-and-mortar boutiques: “We now have more than 50,000 visitors a day to our website, and the leads generated through these eventually account for nearly 35% of in-store sales.” 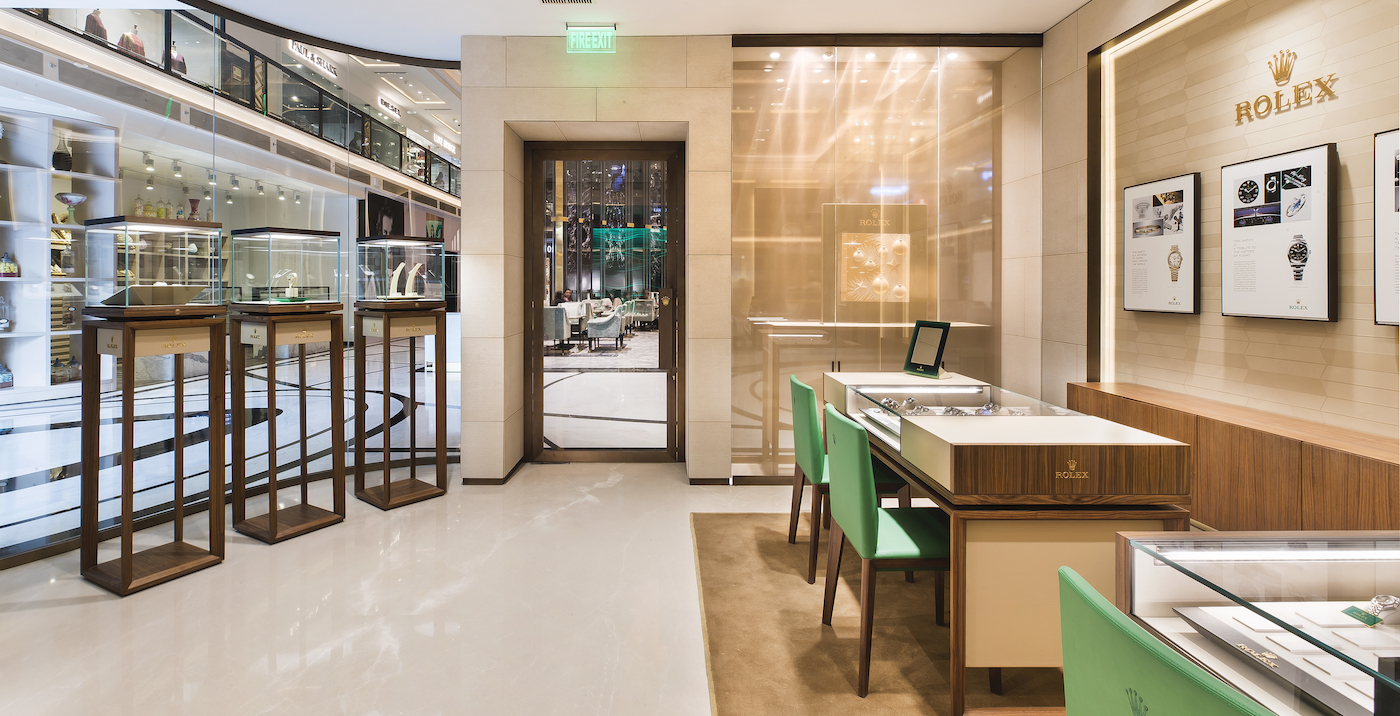 As for many other watch retailers around the world, the latest initiative of Ethos has been the launch of a pre-owned division. “Until not long ago, this business would not have been seen as legitimate in India, so we were afraid that consumers would think we don’t sell authentic watches,” says Yasho Saboo. “But we talked to collectors and observed the work of companies like WatchBox and Tourneau in the USA, and we realised there was a need to establish this market in India too.”

Like e-commerce, this new segment is small but growing. “I don’t think many brands yet have a really clear view about pre-owned, and some are hesitating over whether to support it or not,” says Yasho Saboo. “For our company, it’s a completely different division. We will work with some external partners. Through our loyalty programme, our customer base is now able to trade in watches. The largest chunk of pre-owned timepieces are watches we sold previously to our customers, so we can track them better. And customers also realise that there is residual value when buying watches, so it builds confidence. It’s a virtuous circle.” 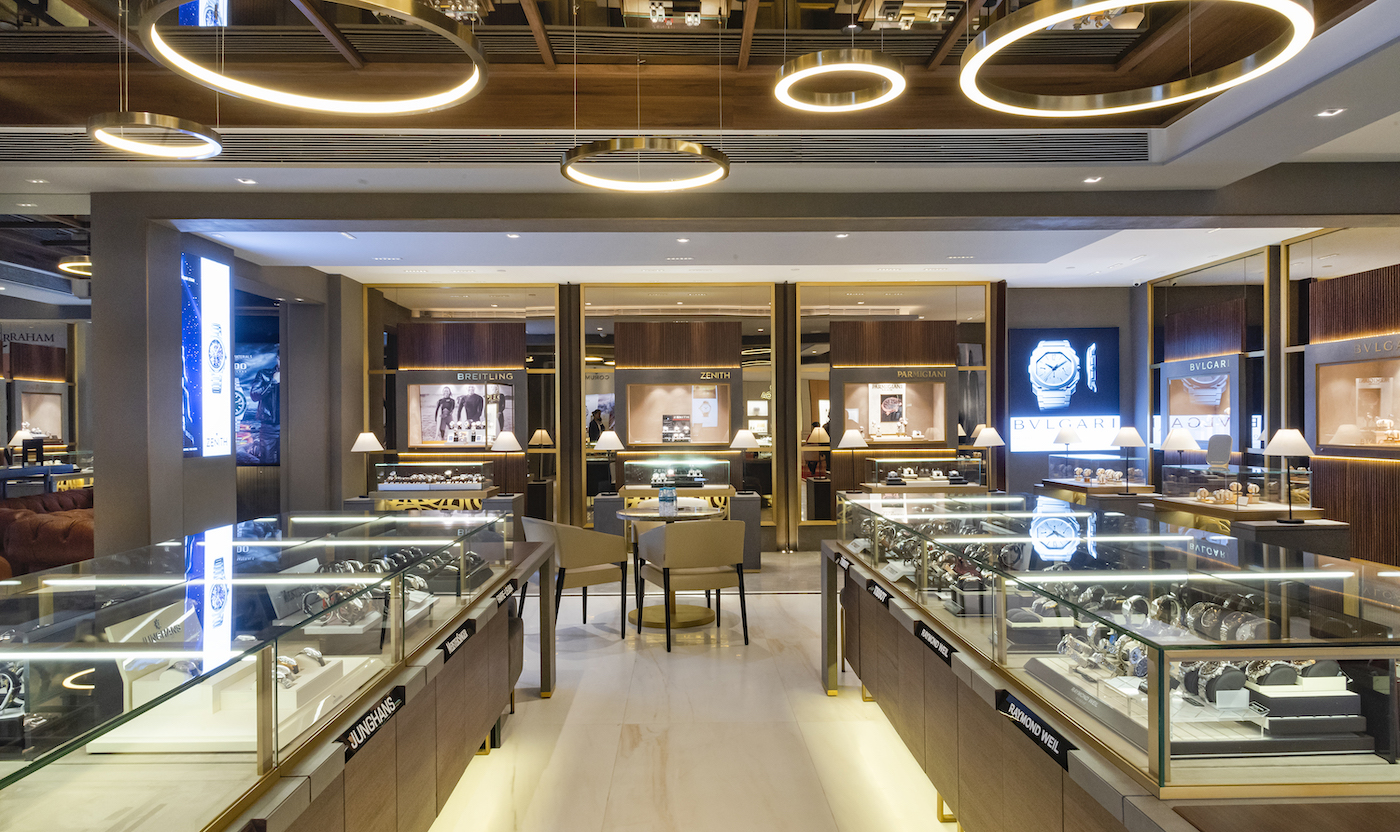 Nevertheless, there remain a few impediments to the pre-owned segment, thanks to the Indian tax structure. In particular, legislation requires that retailers verify that any watch in stock, however ancient, has been legitimately imported. “It’s an old law, we are making sure we comply with it, but we are working with the government to upgrade it to the new reality,” says Yasho Saboo.

The Indian tax system has historically been a source of severe headaches for the watch industry. “We developed as a protectionist country over the last 70 years. Don’t forget that India was conquered not by a regular army but by a British private company, the East India Company. This had a strong impact on the country’s subsequent development and identity.”

Until two years ago, the complexity was primarily due to the fact that each Indian state (there are 29 states and seven Union territories) was free to collect its own taxes. A nationwide VAT was nevertheless introduced in 2017. “The tax started at 28%, which was really high. After a few months, it was reduced to 18% for watches. Meanwhile, import tax was raised from 11% to 22%. If you combine both taxes, it’s still pretty high, though lower than in the past.”

Contrary to popular belief, luxury watches are not immensely more expensive in India than in the rest of the world. The retail margins are just much smaller than elsewhere, to compensate for the high taxation.

Yasho Saboo hopes that VAT will be reduced to 15% (the issue is currently under discussion) and that import tax will return to its previous level of around 11%. Contrary to popular belief, luxury watches are not immensely more expensive in India than in the rest of the world. The retail margins are just much smaller than elsewhere, to compensate for the high taxation. “Our prices match what you would find elsewhere, between 95% and 105%, according to my estimates,” says Yasho Saboo. 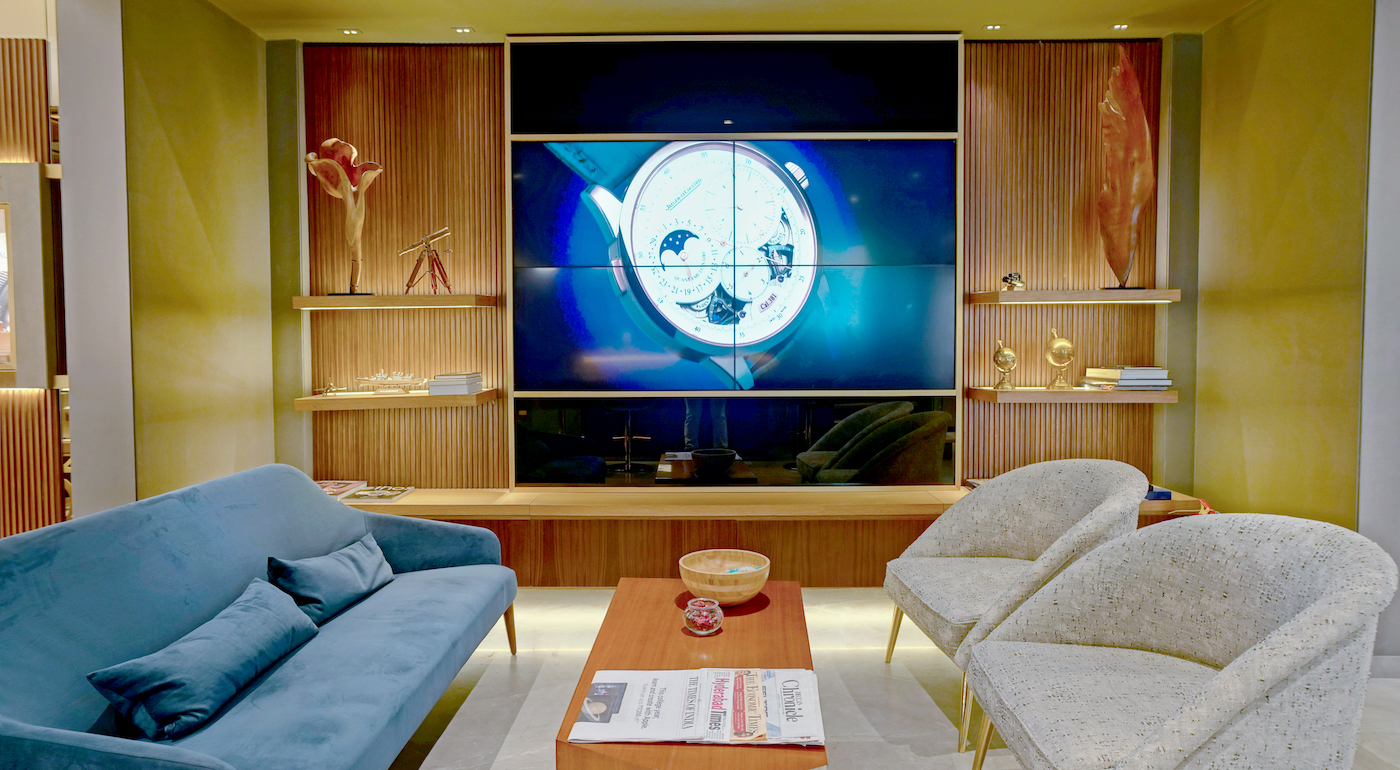 If it’s not about price, why then is the Indian watch market still relatively small? Yasho Saboo sees two main explanations: “Traditionally, India has been less brand-driven and luxury-oriented than other nations such as China. Buying luxury has historically not been seen as a priority. Spending goes primarily on the family. Indians can spend huge amounts for a good education abroad.” Moreover, high income disparity has meant that, unlike in China, India has not yet seen the rise of a strong middle class “with the willingness to spend rather than save.”

There is a silver lining for the retailer, however: “In the last eight years, we have maintained a compound average growth of above 20%.” Yasho Saboo hopes to see interest in watches match the level of passion for jewellery in the country: “India is the world’s largest consumer of gold. Many see it as a means of storing wealth. People are very attached to products that will retain their value over time, so luxury timepieces and quality pre-owned watches have strong potential.”

Yasho Saboo hopes to see interest in watches match the level of passion for jewellery in India.

Faced with the changing policies of groups that are developing their own retail networks, Ethos has opted for a growth strategy based on a strong portfolio of independent brands, in all price segments. It is also investing in flagship stores to cater to luxury brands’ new expectations. “Both these strategies have played well,” says Yasho Saboo. “If you have a large store, you can offer more space to large brands, and also provide a convenient display for smaller, independent watchmakers.”