Louis Vuitton’s watchmaking output often flies under the radar of purists because of its exclusive distribution. It is one of the few luxury houses to have set foot inside the closed circle of Haute Horlogerie. The brand owes this achievement to the technical duo that drives it, Michel Navas and Enrico Barbasini. We spoke with the former to discuss the brand’s new creations – including a Poinçon de Genève model with an unapologetically polarising design, for die-hard “LV” fans only.

Louis Vuitton’s watchmaking output often flies under the radar of purists because of its exclusive distribution. It is one of the few luxury houses to have set foot inside the closed circle of Haute Horlogerie. The brand owes this achievement to the technical duo that drives it, Michel Navas and Enrico Barbasini. We spoke with the former to discuss the brand’s new creations – including a Poinçon de Genève model with an unapologetically polarising design, for die-hard “LV” fans only.
L

ouis Vuitton is one of the rare luxury names with extra-horological origins to have made a successful entry into this rather hermetic environment. With the notable exception of Chanel and Hermès, many have tried and come to grief in the face of high technical requirements and specific codes based on a legitimate pedigree, rather than an agency brief. Some have preferred to throw in the towel, while others have fallen back on licensing cheap products, offering watches as accessories to their core offering, to capitalise on their name with a clientele not particularly interested in watchmaking.

To build up its watchmaking offer, the Parisian firm, one of the big winners of the globalisation of luxury, had the inspired idea of hiring a particularly talented duo of master watchmakers, Michel Navas and Enrico Barbasini (read their portrait by Pierre Maillard from 2013).

Initially brought together to contribute to the growth of Franck Muller’s extravagant watchmaking, they went on to found their own technical design office with Mathias Buttet (who has since become R&D director at Hublot), BNB Concept. Two years later, they left the company because its growing size no longer corresponded to their R&D “ideal”. They rebuilt a smaller company, La Fabrique du Temps, but once again, the business aspect seemed to elude these two passionate independents, whose company grew “in spite of them”. The two master watchmakers wanted to focus on creativity, not management. In 2011, an offer came from Louis Vuitton, which was seeking to establish some horological legitimacy. At that point, the brand’s beginnings in watchmaking dated back only ten years, but they had the means to achieve their ambitions. The Parisian firm intended to build brand new facilities in Geneva, to bring together its various workshops. The Fabrique du Temps became a part of this project – to the extent that it gave its name to the Meyrin manufacture, inaugurated in 2014.

The two master watchmakers wanted to focus on creativity, not management. In 2011, an offer came from Louis Vuitton, seeking horological legitimacy.

Since then, Michel Navas and Enrico Barbasini have given free rein to their creativity on behalf of Louis Vuitton, around the theme of travel in particular. This has led to the creation of niche watch complications and extremely original displays. The obtention in 2016 of the prestigious “Poinçon de Genève” label was a fitting accolade to Louis Vuitton’s watchmaking, which in the meantime had also ventured into the new field of connected watches.

One regrettable characteristic of Louis Vuitton’s watchmaking output is that, unlike other firms with non-horological origins, the brand does not offer its timepieces through multi-brand retailers specialising in watches. Louis Vuitton operates under the general principle that every item is sold from a Louis Vuitton boutique, and watches are no exception to the rule, despite the specific nature of the product.

As a result, Louis Vuitton’s watch creations crop up only rarely in the conversations of purists. The Haute Horlogerie timepieces, especially, are sold mainly at private events organised by the brand, and are regrettably absent (in our opinion, at least) from the traditional meetings of the profession. But they deserve our full attention.

Unlike other firms with non-horological origins, Louis Vuitton does not offer its watches through specialist multi-brand retailers. The brand’s visibility among purists suffers as a result.

This year’s masterpiece is the Tambour Curve Flying Tourbillon, with its large openworked “LV” in the centre of the dial, which marks out this model as being designed for die-hard Louis Vuitton aficionados (especially the diamond-set version). This is the brand’s third model to bear the Poinçon de Genève, visible at 6 o’clock. In addition to its deliberately polarising design, the timepiece is a testament to the brand’s watchmaking capabilities.

Tambour Curve Flying Tourbillon Poinçon de Genève “Everything has been rethought in this timepiece: the movement, the case, but also the general aesthetics,” says Michel Navas. “We have made the Tambour case evolve with a curved line from 6 to 12 o’clock that fits the wrist.” The materials used to craft this model – titanium, combined with a new material registered by Louis Vuitton, Carbostratum® – give it a minimal weight of just over 50 grams.

“With its texture reminiscent of ebony wood, it is an almost organic material, warmer than traditional carbon, which I find rather cold,” explains Michel Navas. “Carbostratum® is made from more than 100 layers of carbon of different sizes, randomly compressed with polymer, which gives each piece a different structure.”

The flying tourbillon is positioned at 9 o’clock, leaving the centre of the dial free for the LV logo. The master watchmaker explains: “The initials are not only meant to be decorative, but also functional. Both the openworked plate and the LV bridge have been treated with black NAC, a new type of decorative coating.” The movement equipping this model is the manually wound Calibre LV 108, with 80 hours of power reserve. Some 178 diamonds adorn the rhodium-plated LV bridge on the diamond-set version.

An all too rare case of a partnership that has stood the test of time between a luxury giant and independent creators.

Out of the fifteen watchmakers at La Fabrique du Temps, only three are trained to assemble models carrying the Ponçoin de Genève. The Tambour Curve Flying Tourbillon model, priced at $258,000 ($322,000 for the diamond-set version), was presented directly to journalists and potential buyers at an event held in Gstaad in early March 2020. “People didn’t necessarily expect to see Louis Vuitton with Haute Horlogerie ambitions. The brand’s watchmaking division is not even twenty years old, so we can work with a certain audacity,” Michel Navas points out.

Like a growing number of watch brands in this era of globalisation of luxury, the company has two hearts: technical creation in Geneva and operational management in Paris. In 2018 Catherine Lacaze became head of the brand’s watch and jewellery division, replacing Hamdi Chatti, who had convinced Michel Navas and Enrico Barbasini to join Louis Vuitton.

Of the 450 Louis Vuitton boutiques around the world, around half offer the brand’s timepieces, which include the numerous variations of the Tambour collection, the Escale models and the new connected watches. Haute Horlogerie models are presented at exclusive events such as the one held recently in Gstaad. 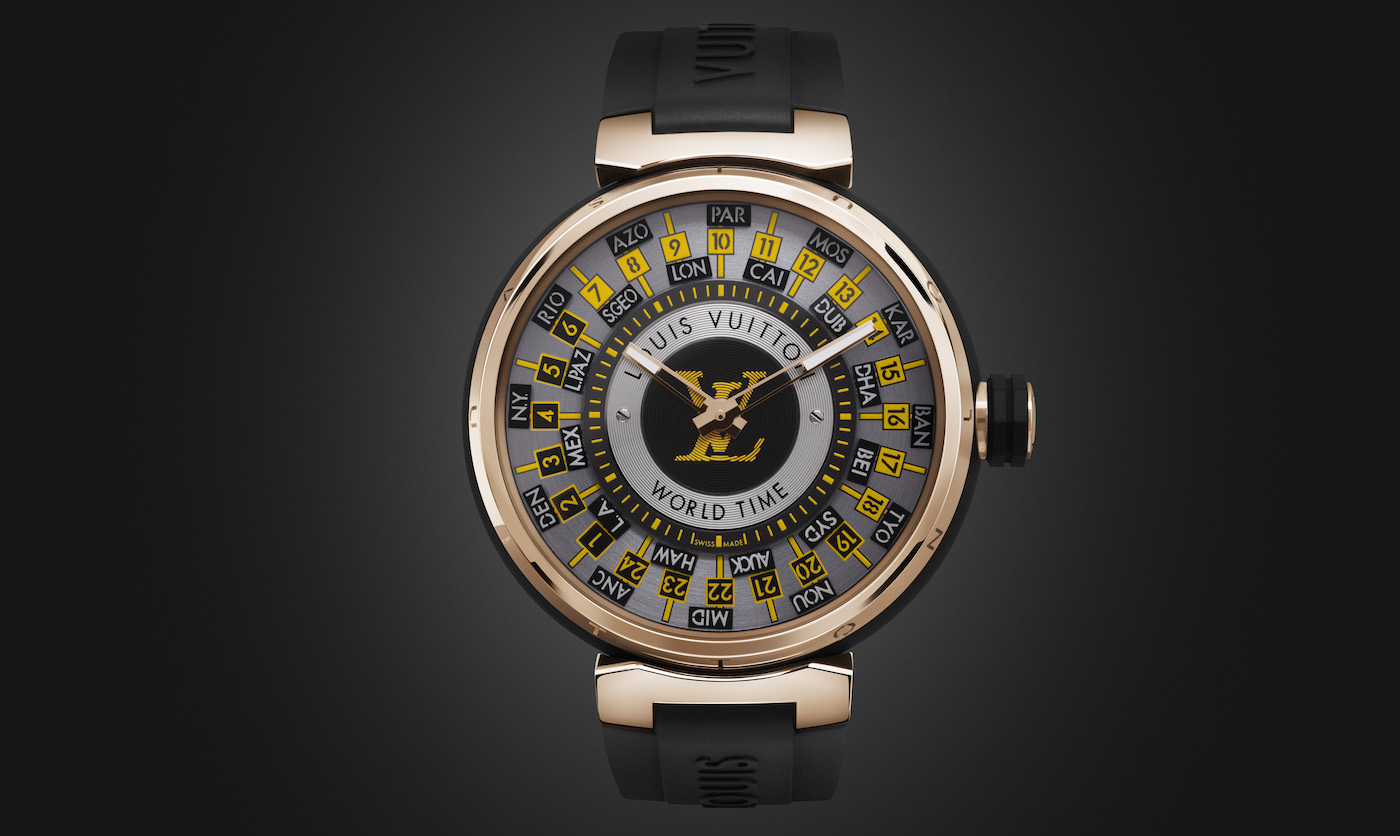 This year, Louis Vuitton also introduced a new Runway model, in what are rather strange times for the world of travel. The timepiece features an evolution of the Universal Time function, with a new architecture featuring city codes on each side of the disc. Another novelty, still inspired by travel, is the Moon Dual Time Drum, a reinterpretation of one of the brand’s great classics, with Monogram flower motifs and typically “Vuitton-esque” flags. 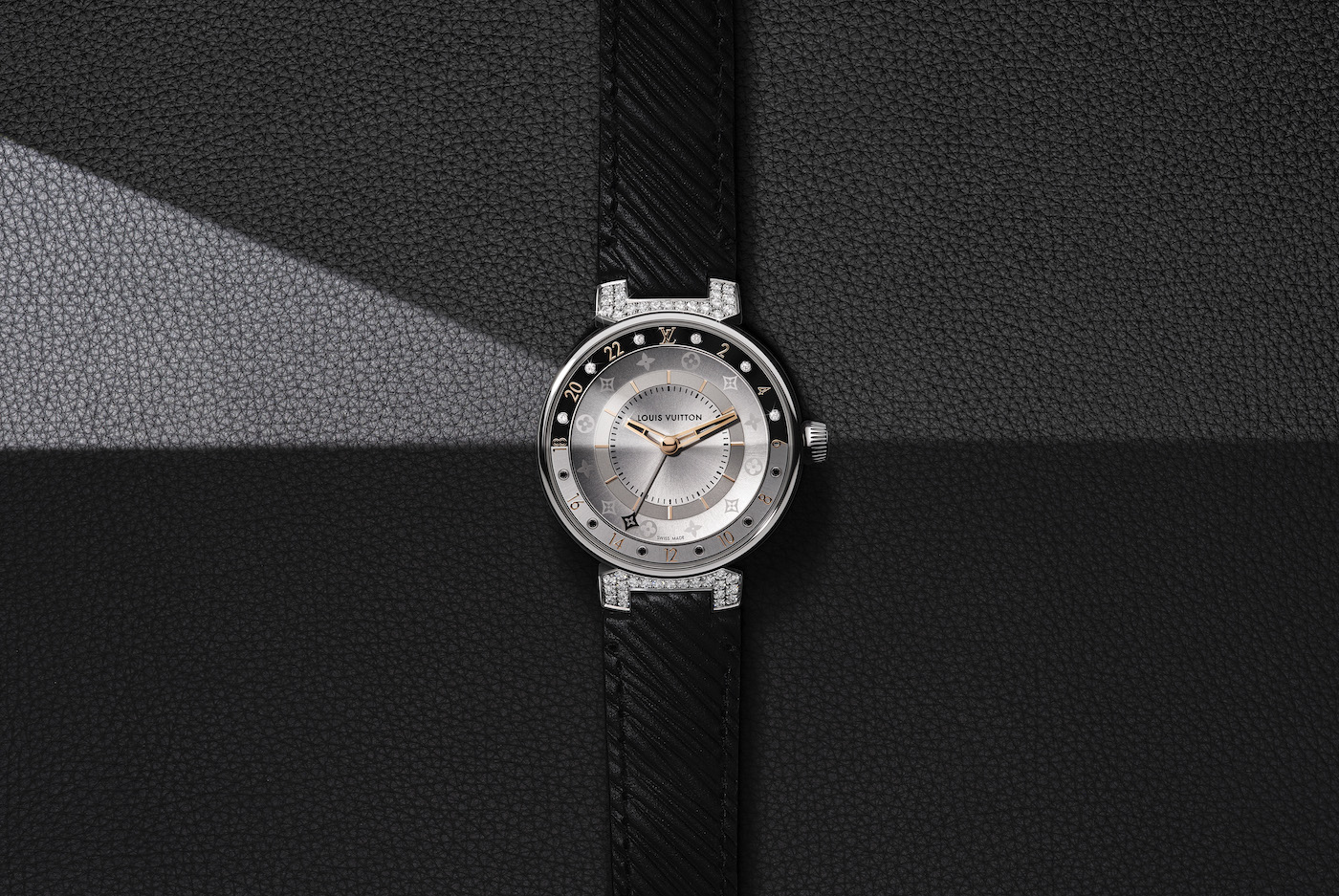 As a former independent creator, does Michel Navas find himself having to shoehorn his imagination into the brand’s characteristic framework? “Enrico and I still see scope for many possible developments,” he replies. “In 18 years, we have developed some twenty unique calibres. We are also working increasingly on bespoke timepieces. I like to work directly with the end customer.”

In 2011, the two creators left behind the constraints of business management to concentrate on technical virtuosity at Louis Vuitton. The brand seems to have given them the framework of expression that suits them, in exchange for their watchmaking legitimacy. In the watch industry, it’s a rare win-win situation between a luxury giant and former independent creators.