LVMH Moët Hennessy Louis Vuitton, the world’s leading high quality products group, recorded revenue of €19.9 billion for the first nine months of 2012, an increase of 22% on the comparable period in 2011. After taking into account the integration of Bulgari, as of 30 June 2011, and a positive currency impact, organic revenue grew by 10%. 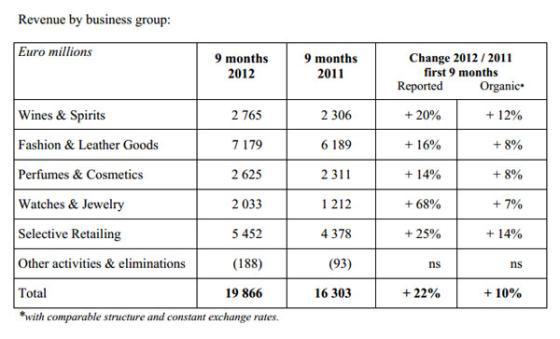 The Group recorded a 15% rise in revenue for the third quarter. Organic revenue growth was 6%, a good performance in the current economic environment, particularly when compared to the strong performance in the same period of 2011. The US market continued to demonstrate solid momentum. In spite of a mixed business environment, Europe and Asia also contributed to the third quarter performance. Louis Vuitton continues to gain market share throughout the world. 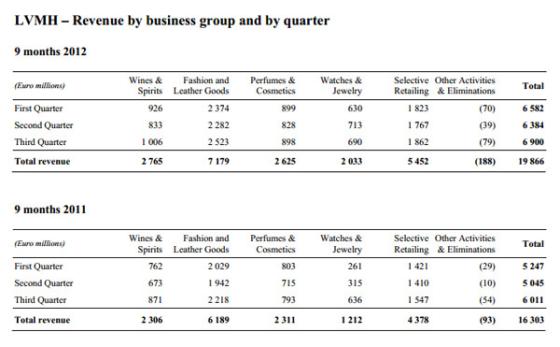 The Watches & Jewelry business group recorded organic revenue growth of 7% for the first nine months of 2012. LVMH’s watch brands made further progress driven by their iconic ranges and innovation. The roll-out of TAG Heuer’s new Link Lady and Zenith’s Pilot range were among the highlights for the quarter. In Jewelry, the success of Bulgari’s Serpenti and B.Zero1 collections was confirmed while the brand pursued a very selective distribution strategy. Chaumet and Fred delivered good performance in their own boutiques.