The WorldWatchReport™ 2013 highlights the trends impacting the luxury watch industry


The WorldWatchReport™ 2013 highlights the trends impacting the luxury watch industry

Since 2004, the WorldWatchReport™, published by the Digital Luxury Group in partnership with Europa Star, has provided the industry with an exclusive analysis of the interests and preferences of luxury watch consumers around the world. Based on a methodology utilising Digital Luxury Group’s proprietary technology, the report identifies and analyses over 1 billion unbiased spontaneous consumer searches to highlight the forces that drive the luxury watch industry further.

At the occasion of BaselWorld, Digital Luxury Group unveils the results of the 9th edition of the WorldWatchReport™, which tracks online interest expressed through search engines for 62 brands across twenty international markets. 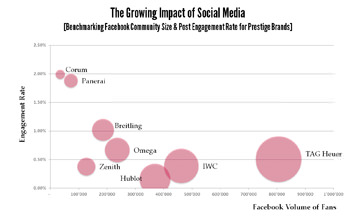 China consolidates its leadership position with 25.6% of all global searches, growing by +36.0%

For the second year in a row, China consolidated its leadership position ahead of the United States, with the largest global market share (25.6%) and strongest year-to-year growth (+36.0%). One out of four consumer searches for luxury watches originates from Mainland China. Top three brands this year were: Omega followed by Rolex (up from third place last year), overtaking Longines now at number three. Rolex (+97.8%), Cartier (+71.6%) and Omega (+70.4%) experienced the strongest evolution among the 62 brands analysed.

Haute Horlogerie (+10.1%) and watch and jewellery (+7.7%) categories growing the fastest

Confirming results observed in the Haute Horlogerie Preview report published at SIHH in January, Haute Horlogerie was the fastest growing category amongst luxury watch clients, showing a healthy growth of +10.1%, followed by the Watch and Jewellery category growing by +7.7%. Both categories had their strongest performance in Asia with 44.2% and 46.8% market share each, followed by Europe (37.5% and 30.7%) and America (18.3% and 22.5%). Exposure to Asia played a crucial role in fuelling categories’ growth: the largest market share in Asia, where the highest growth figures were recorded. In the Haute Horlogerie category, Patek Philippe performed especially well, entering the Top 10 Global ranking for the first time this year and with over 50% of its market share in Asia. Another very strong performer was Vacheron Constantin, which entered the Top 20 Global ranking (19th), and had almost 70% of its market share in Asia. The Watch and Jewellery category was led by Cartier, third in the global ranking (well ahead of other brands in the category), with almost half its market share in Asia and the remainder evenly divided between Europe and America. 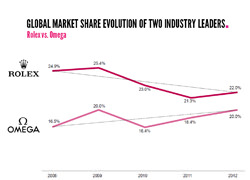 At constant range over the last five years (25 brands, 10 markets only), the gap between the two leaders narrows further, with a difference in demand of 2.0 percentage points (versus 8.4 in 2009). Rolex continues to lead the Global ranking thanks to number one spots in mostly developed, mature markets (US, India, Europe and the Middle East). Omega’s continuing leadership in large, strongly developing markets (China, Brazil, Russia, Japan, Asia Pacific, Latin America) has helped it slowly but surely gain ground on industry leader, Rolex.

For more information about the WorldWatchReport™, published by Digital Luxury Group in partnership with Europa Star on an annual basis, please visit www.worldwatchreport.com.

Brands* analyzed in the WorldWatchReport™

*Brands added to the report for the first time are highlighted