By Pierre Maillard / In collaboration with Longines

By Pierre Maillard / In collaboration with Longines

ongines and high frequency – it’s a largely forgotten story, but one that deserves to be better known, confirming as it does Longines’ unassailable position in the vanguard of timekeeping advances achieved by the Swiss watch industry.

The new Longines Ultra-Chron celebrates an important milestone in the high frequency saga: the 1968 launch of the Ultra-Chron Diver. Equipped with a high-frequency calibre beating at a rate of 36,000 vph, in 1968 it became the world’s first high-frequency diving watch.

The origins of the Ultra-Chron Diver go back to the famous Calibre 360, designed, manufactured, adjusted and submitted by Longines in 1959 for the Concours d’Observatoire.

The origins of the Ultra-Chron Diver go back to the famous Calibre 360, designed, manufactured, adjusted and submitted by Longines in 1959 for the Concours d’Observatoire. With a radically different architecture from that of its competitors, this calibre beating at 36,000 vph, and thus capable of measuring tenths of a second, was equipped with a very large barrel spring (high frequency needs a lot of energy) and a broad sprung balance.

It went on to receive 498 Bulletins de Marche from the Observatoire chronométrique et astronomique de Neuchâtel, as the Neuchâtel Observatory was then known, which meant that the Calibre 360 passed more chronometer tests than any of its competitors in the wristwatch category, between 1959 and 1967. Between 1961 and 1962 this high-frequency movement was acknowledged to be the most precise chronometer of any brand. 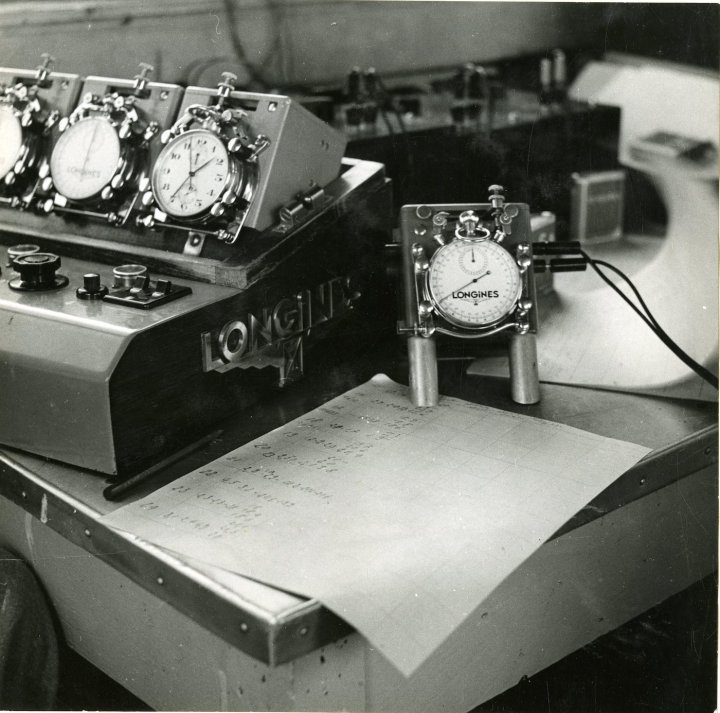 The Calibre 360 deviated on average by just 0.07 seconds in 24 hours; deviation across different positions, calculated during the competition at five different temperatures over the course of 45 days, was just 0.19 seconds. A truly remarkable performance. The following year, 1960, this rectangular movement was fitted inside a rectangular wristwatch. This became the very first high-frequency observatory chronometer wristwatch. Longines manufactured two hundred Calibre 360 movements from 1959 to 1963. 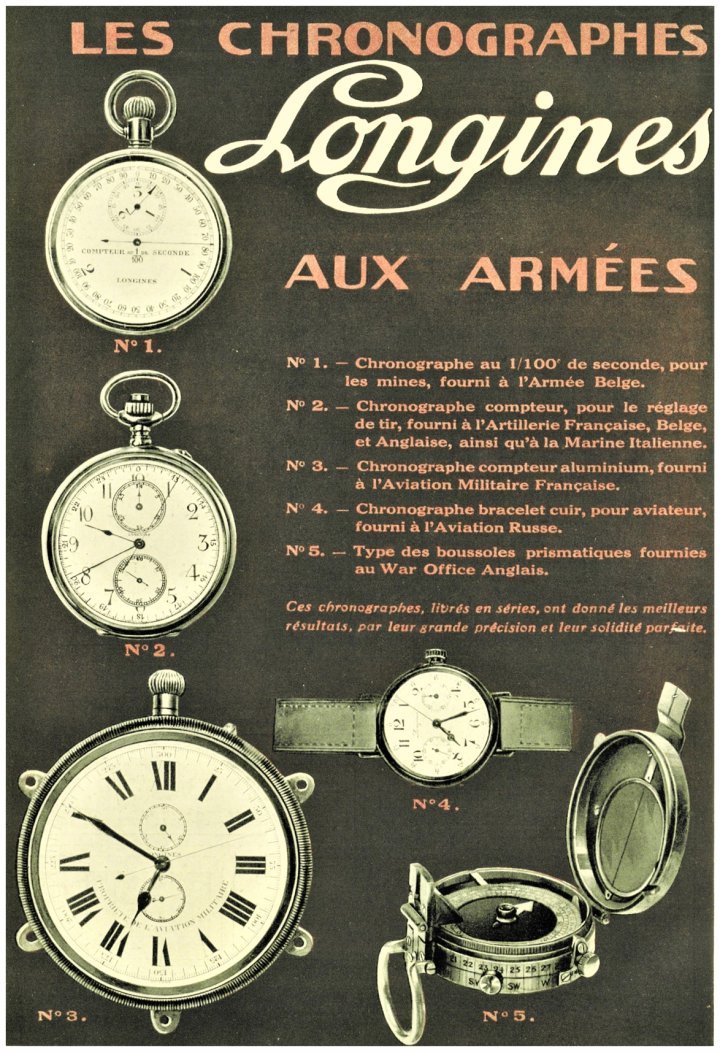 From that point, Longines forged ahead with its research in this specific domain of watch mechanics. In parallel, the relationship between Longines and the world of sport grew ever closer, with the Saint-Imier firm becoming a major figure in sports timekeeping worldwide: equestrianism, of course, athletics, motor sport from F1 to rally driving, skiing, bobsleigh, etc. 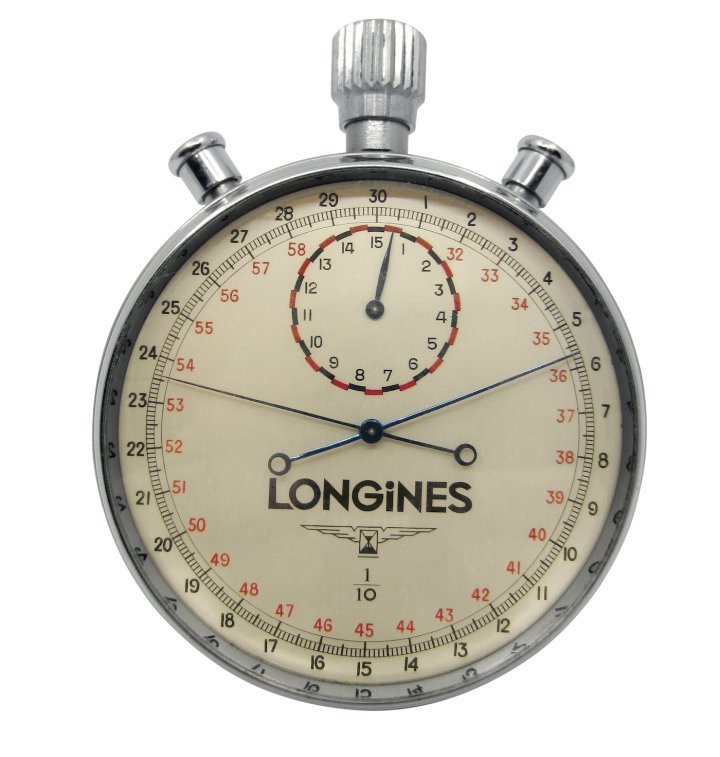 In 1939, Longines introduced the famous “High-Frequency Skiing Timer” equipped with a 36,000 vph movement capable of measuring tenths of a second, which was to become the standard in sports timekeeping. Longines’ dominance of high-frequency movements and sports timekeeping continued into the 1950s and 1960s, when a number of different models were launched, including the Ref. 7411 stopwatch with 1/10-sec flyback mechanism, which could measure and display hundredths of a second.

The relationship between Longines and the world of sport grew ever closer: equestrianism, of course, athletics, motor sport from F1 to rally driving, skiing, bobsleigh, etc. 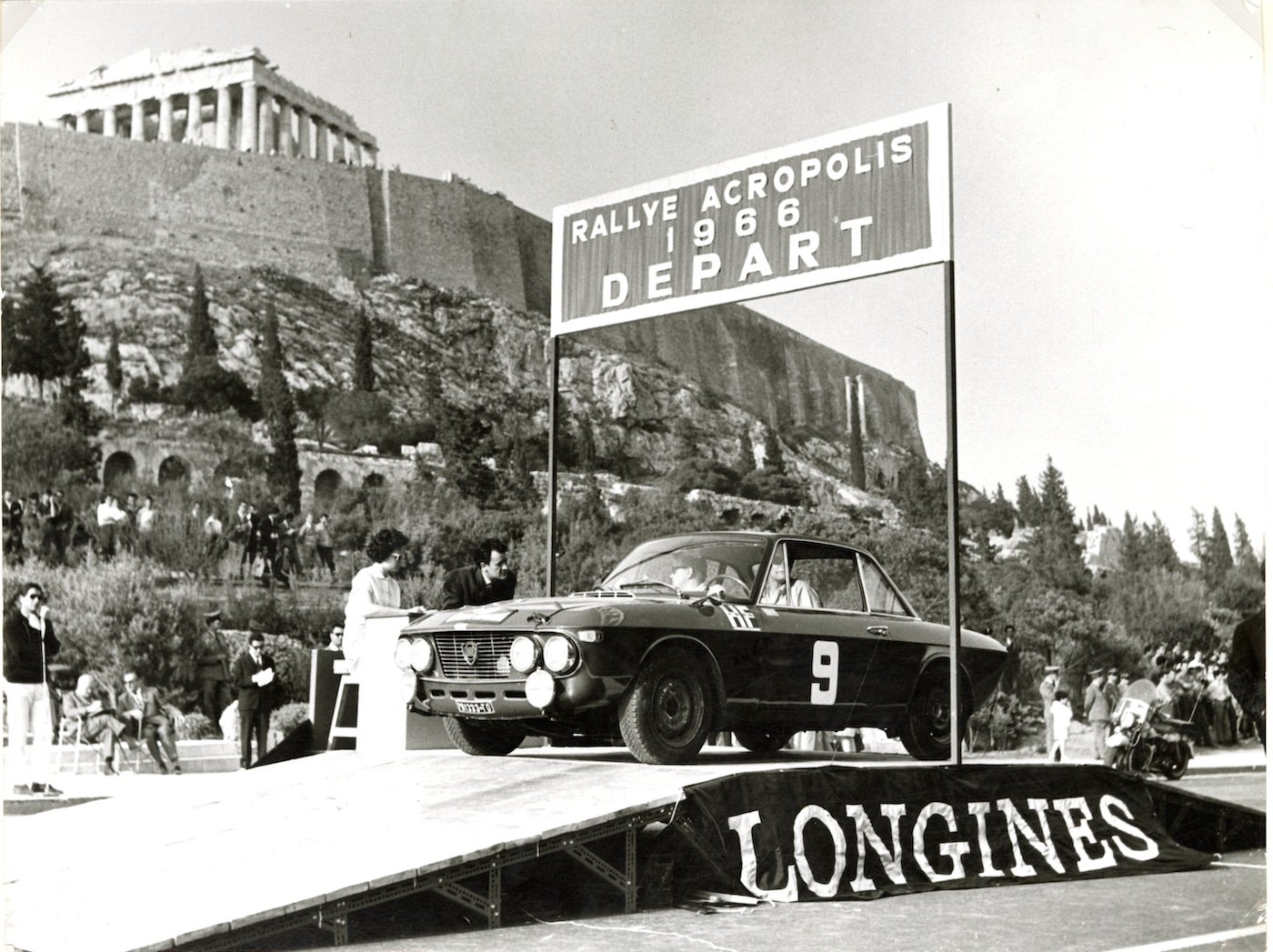 The race for higher frequencies

In the 1960s, pressure began to mount, and the race for higher frequencies gathered pace. Spurred on by the release of the Bulova Accutron in 1960, the first electronic watch governed by a tuning fork, which claimed precision of 1 minute per month, many watchmakers rose to the challenge of coming up with a purely mechanical solution. They included Ulysse Nardin, Zenith, Girard-Perregaux, Heuer, Mido, Movado and ETA. But the main problems they faced at that time were the restricted capacity of the power reserve compared with the energy requirements of high-frequency mechanisms, and problems with traditional lubrication. When beating at a higher rate, the mechanism tended to scatter droplets of oil around inside the movement, causing problems for optimum operation. 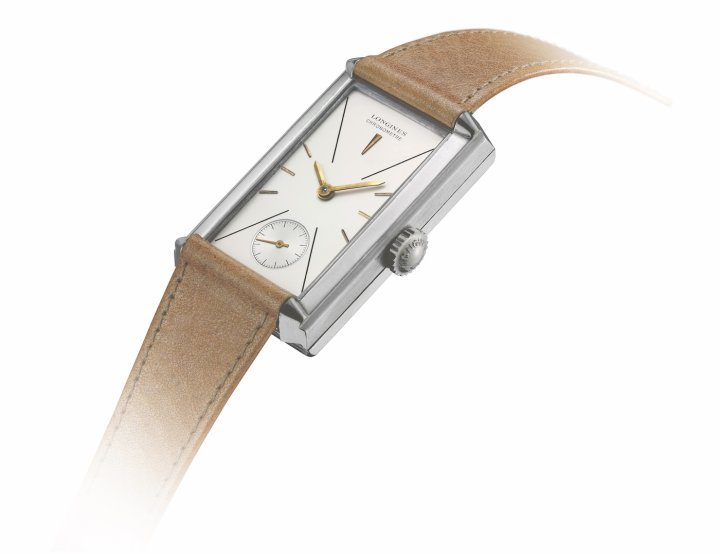 The first wristwatch to be equipped with the high-frequency Calibre 360.

On the strength of its historic knowledge in the domain of high frequencies, Longines decided to direct its efforts towards making the Calibre 360 properly reliable, and suitable for series production. This effort quickly produced the new 430 family of high-frequency calibres, culminating in the creation of the Ultra-Chron, the first of which would be manufactured at the end of 1966. The Ultra-Chron was the first high-frequency automatic wristwatch (111⁄2 lines), with a 42-hour power reserve. The lubrication problem was solved with the use of a dry lubricant for the escapement, made from molybdenum bisulphite. The process was patented that same year. 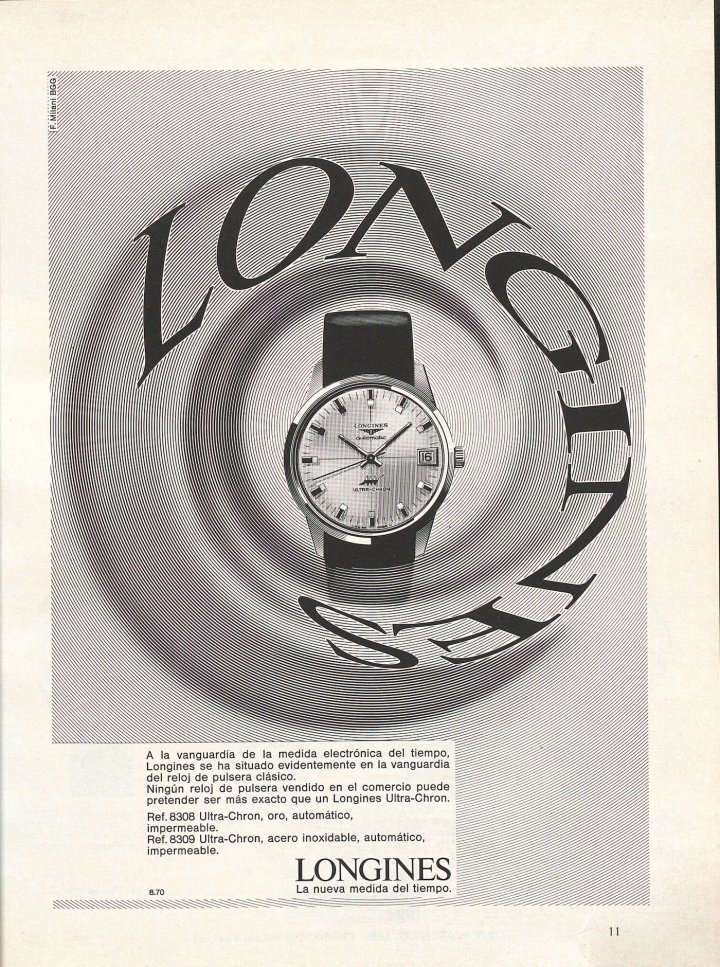 Equipped with the new high- frequency Calibre L430, the 1966 Ultra Chron is the first wristwatch with an automatic movement beating at 36,000 vibrations per hour. It has a power reserve of 42 hours. It takes on Bulova’s Accutron, with the same precision of 1 minute per month.

The advantage of a watch like this was that it guaranteed exceptional precision of “1 minute per month”, identical to the precision achieved by Bulova with its tuning fork, but in a traditional mechanical watch, which made it cheaper, easy to repair anywhere in the world, with no need for batteries, relying instead on an automatic winding mechanism that needed no additional energy input.

The Ultra-Chron was the first high-frequency automatic wristwatch (111⁄2 lines), with a 42-hour power reserve. The lubrication problem was solved with the use of a dry lubricant for the escapement.

The first Ultra-Chron watches were sold in the USA. This was a way of meeting the Accutron on its own turf, with a high-precision watch that was also mechanical, automatic and autonomous. The first Ultra-Chron models were elegant dress watches in steel or 14K gold, with or without date, at a relatively high price point for the time: between USD 125 and 695. The 430 family of high-frequency 111⁄2-line movements that equipped the watches existed in a number of different forms and executions. Some of them were COSC-certified, as indicated on the dial or the movement itself.

One important advantage of a high-frequency movement is reduced sensitivity to shocks. If the amplitude is disturbed, it quickly reverts to normal. This reliability, in addition to its superior precision, made the Calibre 430 a natural fit for a sports watch. In 1967, Longines developed the Ultra-Chron Skindiver (ref. 7970), a landmark timepiece that would be launched in 1968. It was the world’s first diving watch to be equipped with a high-frequency movement. It came in a generously-sized tonneau-shaped case measuring 41 mm across, with a depth rating of 200 metres. The lugless design incorporated a unidirectional rotating bezel with minutes indicated in red, a seconds hand that, thanks to the high frequency, appeared to glide across the dial, and a date. It offered guaranteed precision of one minute per month, or two seconds per day. 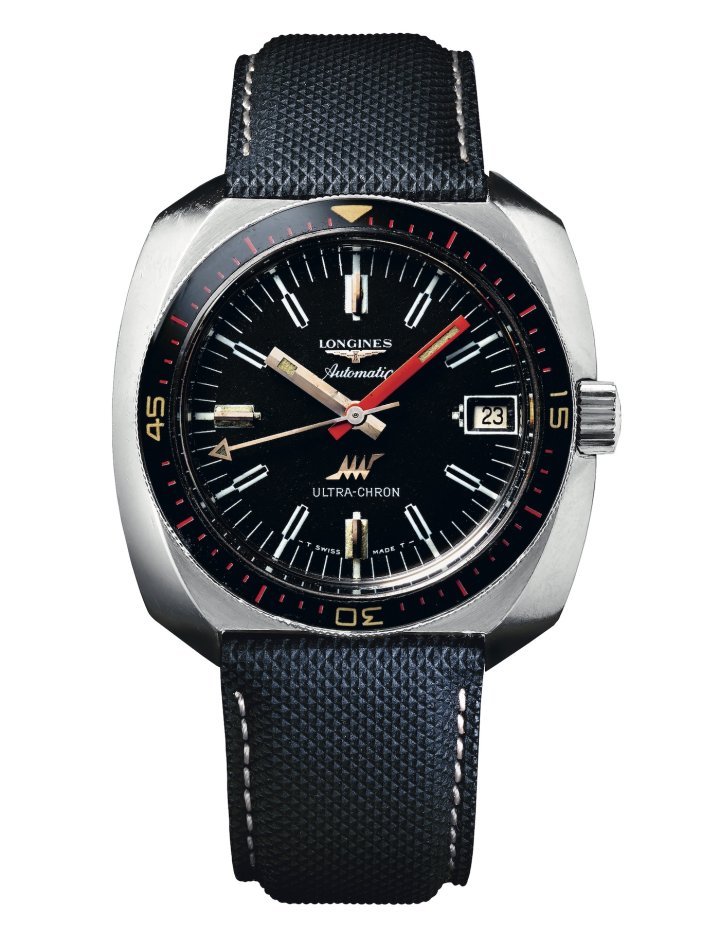 In 1968 Longines went a step further, launching the Ultra-Chron Professional Diver’s Watch (ref. 8221). Water resistant down to 300 m, this model featured an internal rotating bezel protected from shocks and corrosion, and a case that was manufactured by specialist Piquerez, guaranteeing absolute protection for deep sea divers.

This is now the Ultra-Chron model most highly prized by col- lectors. For information, between 1967 and 1975 Longines pro- duced a total of 520,000 Ultra-Chron watches across all models.

Water resistant down to 300 m, the Ultra-Chron Professional Diver’s Watch from 1968 featured an internal rotating bezel protected from shocks and corrosion, and a case that was manufactured by specialist Piquerez.

A little over 50 years after the original launch, Longines, which celebrates its 190th anniversary this year, drew inspiration from the Ultra-Chron Diver to release the new Longines Ultra-Chron. Directly inspired by the iconic 1968 dive watch, this new model borrows its ancestor’s aesthetic codes and main features – including, crucially, its high frequency. 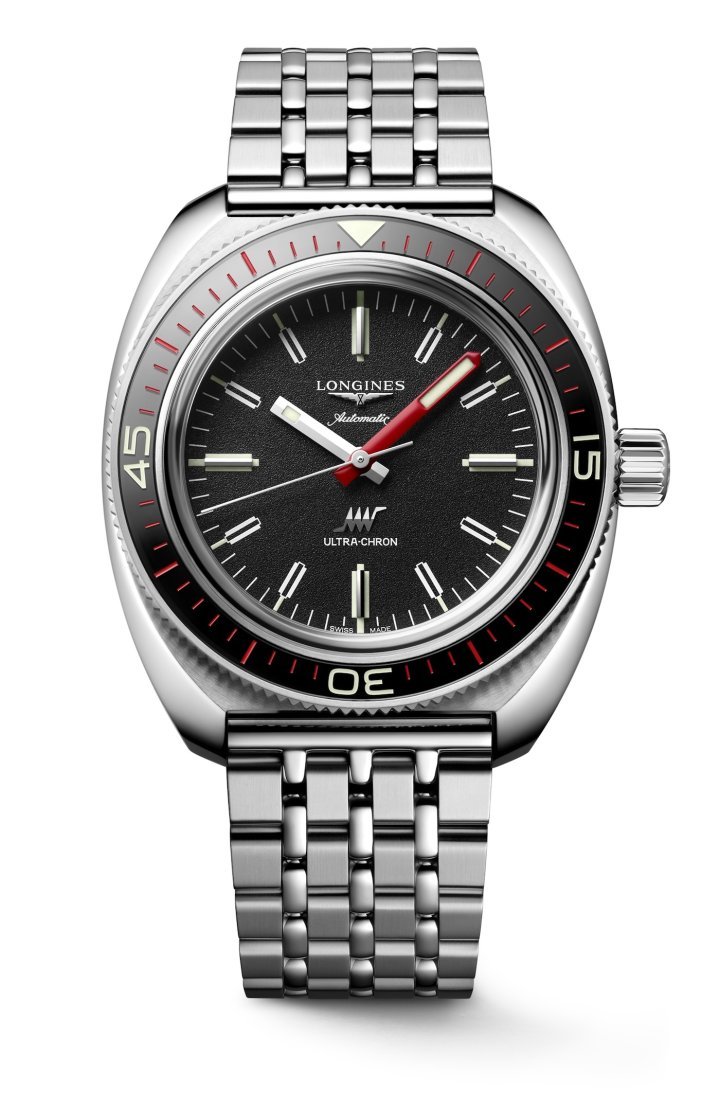 The heir to the historic calibres 360 and 430 is called the Calibre L836.6. This new high-frequency Longines calibre has a silicon balance spring that oscillates at 36,000 vph (10 beats per second), and was developed and produced exclusively for Longines. Its precision to 1/10 of a second is confirmed by the rigorous chronometer certification delivered by the independent Timelab of Geneva. In tests, each watch is subjected to a 15-day trial, during which a series of measurements are taken at three different temperatures: 8°C, 23°C and 38°C. The results of this watch, with serial number 10646997, speak for themselves. 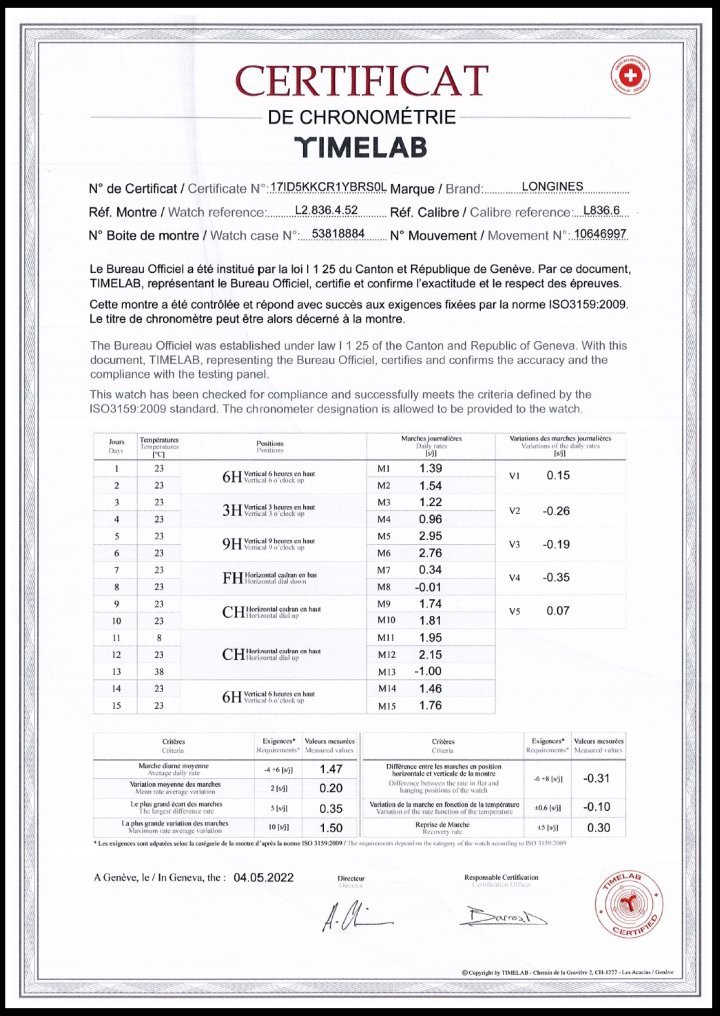 According to this certificate delivered by Timelab, the watch’s average daily rate is 1.47 sec/day, while the generally accepted standard is -4/+6 sec/day. Another figure: while the largest acceptable difference rate is 5 sec/day, the calibre L836.6 has a very minimal 0.35 sec/ day variation. Similarly, the rate variation according to temperature, which has a standard variation of ±0.6 sec/day, is just -0.10 sec/day.

Longines, which celebrates its 190th anniversary this year, drew inspiration from the Ultra-Chron Diver to release the new Longines Ultra-Chron.

This movement thus provides high precision, rigour and stability, in addition to increased shock resistance, which is an inbuilt advantage of high-frequency movements which, because of their high rate of oscillation, reduce the damaging effects of shocks and changes in position. Paradoxically perhaps, high frequency movements offer an aesthetic advantage, because the high beat produces smoother motion of the seconds hand, which advances ten times each second, producing the illusion of a serene glide. The hands rotate around a grained black dial complete with a minutes track, Super-LumiNova®-coated batons and rhodium-plated applied markers. The minute hand is in the traditional bright red and, like the hour hand, is filled with Super-LumiNova®. 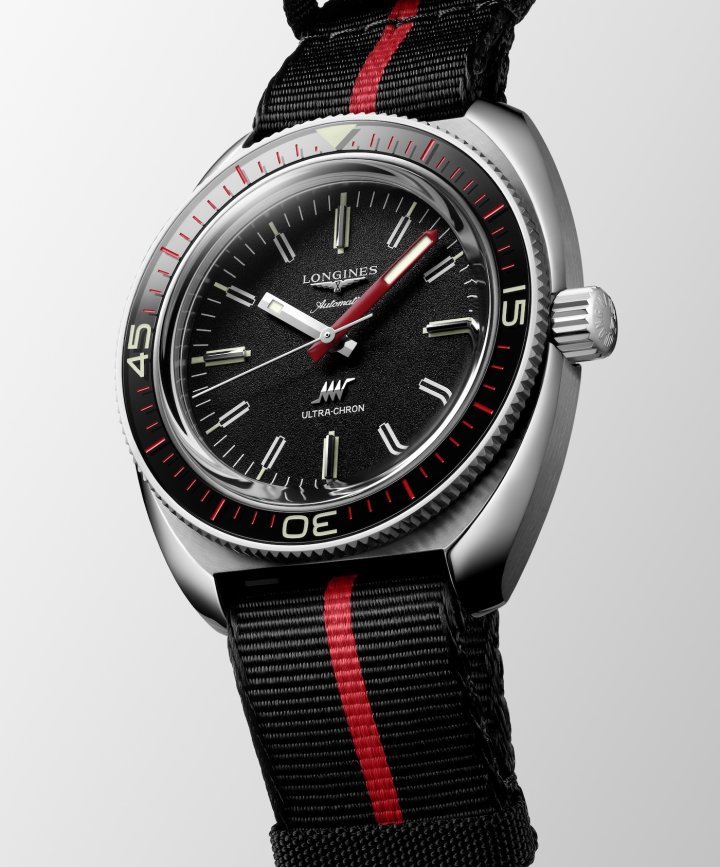 Around the highly legible dial is an external rotating bezel with a scratch-resistant sapphire insert, its figures clearly picked out in Super-LumiNova®, which is beautifully smooth to the touch. The Longines Ultra-Chron adopts the robust cushion shape of its 1968 forebear. In stainless steel, with a 43 mm diameter and 13.60 mm depth, screwed crown and case back, depth rating of 300 metres, protected by a thick sapphire crystal with multiple anti-reflective coatings on both sides, the Longines Ultra-Chron certainly draws the eye.

The lugless case attaches simply to its metal bracelet, with a folding buckle and push release. The geometry of the links is a reminder and a reinterpretation of the original. There is also the option of a brown leather strap with pin buckle, and both come with an additional black and red striped NATO strap, in a special wooden case with a tool for changing the strap.

It’s a watch wholly of its time, despite being inspired body and soul by a watch that marked its own time, over half a century ago. The Longines Ultra-Chron, a product of its history, marks a new milestone in the lengthy high-frequency saga Longines has continued to tell for more than a century.

The heir to the historic calibres 360 and 430 is called the Calibre L836.6. This new high-frequency Longines exclusive calibre has a silicon balance spring that oscillates at 36,000 vph (10 beats per second).