LOUIS MOINET - FROM THE KITCHEN TO THE STARS


LOUIS MOINET - FROM THE KITCHEN TO THE STARS

In barely ten years Jean-Marie Schaller has succeeded in reviving the forgotten name of Louis Moinet and placing it firmly at the centre of the watchmaking scene. Here is the fascinating story of this independent watchmaker, who began in a kitchen and is now reaching for the stars.

“ My story is not at all typical,” announces Jean-Marie Schaller right off the bat. “You may or not believe this, but when I created the Louis Moinet brand, it was because I had the very strong feeling that it was my destiny. I didn’t really have a choice. And, because I didn’t have any money either, I had to do it with my heart.”

Is this the usual story-telling to which the watchmaking industry is particularly partial, given its need to inject that crucial touch of soul to what is essentially, particularly now, a useless lump of metal: the wristwatch? I have to say... it isn’t. Having known the man in question for two decades now, and followed his career, I can assure you his sincerity is beyond question. Jean-Marie Schaller continues:

“Gaining recognition for Louis Moinet was, for me, a mission. It was about paying tribute to a watchmaker who was supremely talented, and yet so humble that he was almost forgotten forever. It’s a genuine love story; more than that – it’s almost a metaphysical experience. You might not believe me, but sometimes I have the impression that Louis Moinet is there, putting ideas into my head, that he is the source of my intuitions. In any case, one thing is quite clear: I couldn’t sell this brand. It would be a betrayal, the brand would suffocate...”

Strong words, and a marked contrast to the usual marketing speak, which tends to be more controlled, smoother, and highly unlikely to venture into metaphysics. And, like many true and lasting love stories, this one began with apparent indifference. The embers were smouldering below the surface. It was 1991. Jean-Marie Schaller was at Siber Hegner (a distributor that later became the DKSH group), working under Daniel Roth, who had just launched his own brand. Daniel Roth was very familiar with Breguet and its history, having been involved in its renaissance as a watchmaking brand (at the time Breguet did not yet belong to Swatch Group, which bought it in 1999, but to the Chaumet brothers, and then Investcorp). He happened to mention the name of Louis Moinet (1768–1853), a long-forgotten contemporary of the ultra-famous Abraham-Louis Breguet. But Jean-Marie Schaller wasn’t really paying attention. He was already thinking about ‘reviving’ another watchmaker, Abraham-Louis Perrelet, the inventor of the automatic watch (Editor’s note: this is disputed by some historians). He accomplished his goal in 1993, when he launched the Perrelet brand with an investor (he was to leave in 2000). 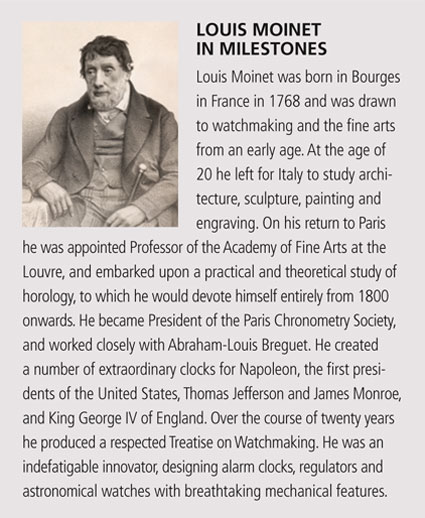 But a few years later, in 1997, the name of Louis Moinet cropped up again. This time it was from a friend, who had seen what Schaller had achieved with Perrelet and had bought the name Louis Moinet with a view to replicating his success. But the friend had decided that the adventure was not for him, and was hoping to sell the name to Jean-Marie Schaller. This was the second ‘contact’ with Louis Moinet. It didn’t come to anything. Time passed once again, and Jean-Marie Schaller moved on from the Perrelet adventure, left Switzerland for personal reasons and went to live in France, away from the watchmaking world. But this new departure didn’t work out, and Jean-Marie Schaller returned to Switzerland “all washed up,” as he puts it, “without a penny to my name.” He was taken on by Lacoste watches in the marketing department, where he evidently did a good job, in just a few short years overseeing an increase in volume from 40,000 to 266,000 watches a year when he left. But this kind of mass marketing left him unsatisfied. He still dreamt of devoting himself to a high-end, mechanical, historic brand. Happily, his friend came back on the scene, and once again tried to get him to buy the Louis Moinet name. 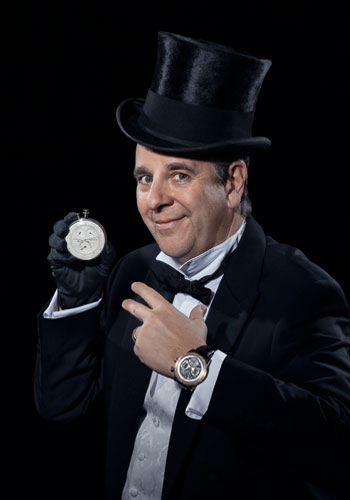 Jean-Marie Schaller with the compteur de tierces invented by Louis Moinet in 1916, the first chronograph ever made.
This photograph was taken by Geneva-based photographer Denis Hayoun, founder of Studio Diode.

THE START OF AN ADVENTURE

Jean-Marie Schaller, who at that point had nothing more than a ten-page biography of Louis Moinet to go on, finally gave in to the pestering. Along with his partner Micaela he bought the name for what was effectively a negligible sum, but which at the time was practically all he had in the world. In 2005 the big adventure finally began, with what he calls his “laboratory years”. The laboratory in question was in fact his own kitchen. He explains: “We established a number of principles from the outset: Louis Moinet would be devoted exclusively to the highest form of mechanical art, and would produce only limited editions and one-of-a-kind pieces.” But before embarking upon this journey, it seemed like a good idea to learn more about this Louis Moinet, still something of a shadowy figure. “At the time I only had this short biography, less than ten pages long, and his famous Traité d’Horlogerie, published in 1848. I had to retrace his steps and rediscover his works, including his famous clocks.” This exhilarating adventure took him to Saint Petersburg and Washington, D.C., where he gradually pieced together the crucial role played by the watchmaker, culminating in the 2013 discovery of the world’s first chronograph, which Louis Moinet completed in 1816 (see Louis Moinet biography, above).“But in parallel with this research I had to create a new reality, flesh out the product line and make it coherent,” Schaller continues. “We do not travel through life alone, so we began by building up a genuine family of solid partners, both upstream and down. This took quite a long time, because we weren’t just looking for subcontractors, we wanted true collaborators who were committed and passionate and would work with us towards the same goal. So we moved forward step by step. A local shareholder came on board and we were able to launch our first product in gold. We had to grow slowly because we didn’t want to have to borrow any money, so we were obliged to turn a profit every year. As you can see, our work is governed by both a sense of craftsmanship and good old-fashioned common sense.”

Jean-Marie Schaller, who is creative director as well as CEO, then defined a neo-classical aesthetic inspired directly by Louis Moinet’s historical period, but adapted in such a way as to give it a contemporary resonance and meaning. “The beauty and fascination of working only with limited editions is that you’re forced to always go that extra mile, to constantly reinvent yourself. But if we have managed to do that while maintaining a strong coherence, it is because Louis Moinet is and remains our unwavering guiding light: chronometric precision, astronomical observation, art and craftsmanship are at the root of his thinking, and they are the values that shape our activity.”

This guiding light, which is historical, technical and aesthetic, has given the Louis Moinet brand the opportunity to produce watchmaking creations that are coherent, strong and unusual from many points of view. The style emerged gradually as each new piece was crafted; the house makes a point of producing its own cases, hands, dials and its own unique decorations (the Côtes du Jura, which are more sensuously curved than the famous Côtes de Genève).Most of the movements and mechanisms are original and exclusive, and from the beginning they were created with the designer and creator Concepto, a recognised cutting-edge specialist in the domain of complications.In less than ten years, Louis Moinet has succeeded in creating and marketing a unique output, with models immediately recognisable by their shared family resemblance. Their primary traits are a richly detailed aspect without unnecessary decoration, a neo-classical but resolutely contemporary aesthetic, and complexity always paired with legibility. The watchmaking of Louis Moinet is not just about high precision, although it is certainly that; it is also thoughtful and philosophical, with something of an astronomical bent. For, let us not forget, Louis Moinet, a skilled craftsman and a distinguished watchmaker, was also a renowned astronomer who, in his exploration of the cosmos, rigorously researched the mechanisms of time while admiring its ineffable beauty.

Today, Louis Moinet watches can be divided into three broad families: Essence de Louis Moinet, the Classique collection, and ‘Mechanical Art’ – the unofficial designation of the mechanical curiosities that the brand likes to play around with. This latter category includes the Derrick Tourbillon and Derrick Gaz, which were introduced at Baselworld this year. These sumptuous pieces, as their names suggest, reproduce on their dials the motion of a working derrick.The Classique family includes watches whose raison d’être is precision chronometry, beginning with a whole series of beautiful tourbillon watches, and also the iconic Mecanograph, perhaps the pinnacle of this research. The only independent watch to have won a prize at the 2013 Concours de Chronométrie, this chronometer reveals its regulating organs through a half dial, and features a remarkably efficient patented bi-directional winding mechanism dubbed Energie Plus.The Essence de Louis Moinet family brings together watches with specific features. In addition to the Tempograph 20 Seconds, with its astonishing creativity and mechanical originality, there is the Astro Moon with its stunning moon phase display decorated with meteorite, and the great innovation of the year, the Memoris. 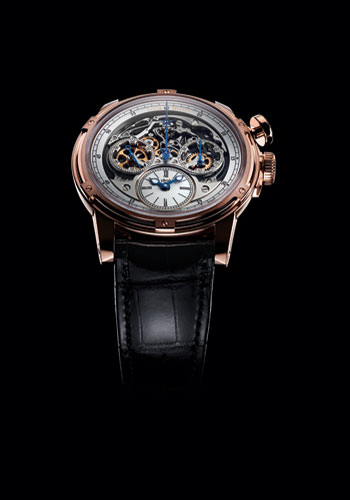 “It’s probably our most important launch ever,” notes Jean-Marie Schaller. “The timepiece stands at the exact crossroads of the 10th anniversary of the Ateliers Louis Moinet and the bi-centenary of the chronograph invented by Louis Moinet [see sidebar]. It was therefore important that whatever we created to honour this legacy should be different from its predecessor. While everything, or almost everything, chronograph-related had already been invented, there was still one step nobody had dared to take: no longer seeing the chronograph as a complication, but rather as the primary function of the timepiece. And so Memoris was born: the world’s first watch-chronograph. But we couldn’t draw inspiration from what had come before: everyone else worked from the premise that the chronograph was an additional complication on top of the time function. Our starting point was the opposite: sweeping away the past and making the chronograph the heart of our design, the central component to which we then added a time function, rather than the other way around.” 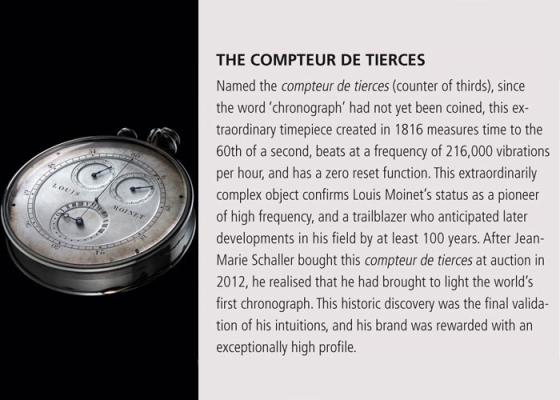 The result is a magnificent watch, the first to give pride of place to a classic chronograph movement with column wheel. Its components are mounted at the top of the movement, which thus takes up all the central space; the hours and minutes display is relegated – if this is the right word – to a delicate little white lacquered dial at 6 o’clock. A complete role reversal. The first watch-chronograph – an entirely different beast from the usual chronograph-watches – not only validates Jean-Marie Schaller’s entire approach, but also places his brand at the pinnacle of mechanical watchmaking. 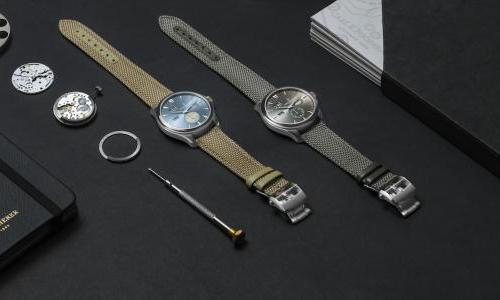