LVMH - increased firepowerUnder the leadership of Francesco Trapani, the watchmaking and jewellery arm of LVMH (TAG Heuer, Hublot, Zenith, Bulgari, Louis Vuitton, Chaumet, Fred, de Beers) will be entering this year’s edition of BaselWorld with increased firepower, thanks mainly to the success of TAG Heuer, Hublot and Zenith, and the increasing power of Louis Vuitton watches. The recent announcement that TAG Heuer’s emblematic CEO Jean-Christophe Babin would be transferring to the luxury steamer Bulgari at the end of June 2013 surprised observers, especially given the man of indefatigable dynamism’s close attachment to the “values” of the sporty brand. But it is his undeniable success at the head of TAG Heuer that destined him for this very difficult (and unofficial) mission to bring Bulgari up to the same level as Cartier. This will be a considerable challenge for the watchmaking and jewellery arm of LVMH, which hopes to strengthen its presence in the global jewellery market, a sector that is still split among a multitude of local actors but which is worth some 100 billion euros (against around 60 billion—at retail prices—for luxury watchmaking) and where the margins are very comfortable.

At the time of writing, we do not yet know the name of Jean-Christophe Babin’s successor at the head of TAG Heuer, but he or she will arrive at the controls when the brand is set to break the symbolic billion-franc sales barrier. The brand has also considerably strengthened its industrial integration and production of its own manufacture movement (the Calibre 1887, an integrated column-wheel chronograph with oscillating pinion), has now reached its full capacity and allows TAG Heuer greater autonomy, which is welcome given the current extreme tension in the movement market. Thanks to the magic of dates, an opportune moment has presented itself for the main commercial launch of the Calibre 1887: the 50th anniversary of the Carrera model, created in 1963 by Jack Heuer himself. TAG Heuer is therefore launching a collection of five new Carreras, all fitted with the Calibre 1887. 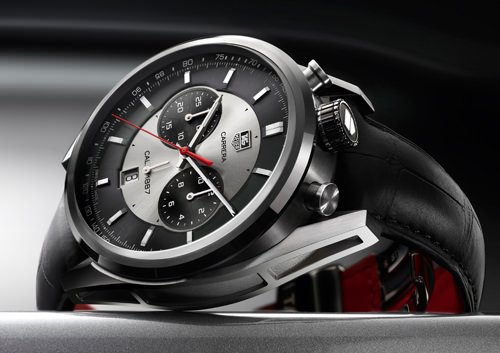 Taking its aesthetic inspiration from the Carrera Mikrogirder 10,000 (winner of the Golden Hand at the 2012 Geneva Watchmaking Grand Prix), the Carrera Calibre 1887 Jack Heuer Edition, with its asymmetrical 45mm case and its crown and pushers at the top, is the flag- bearer of the collection. The bezel in steel and black titanium carbide, brushed and polished by hand, the case in finely polished brushed titanium and steel, the tachymeter and pulsometer on the dial all recall the original design of the Carrera and the first sports timers by Heuer. The more classic Carrera Calibre 1887 Chronograph has a ceramic bezel 43 mm in diameter. Its brushed and polished steel case and steel bracelet with bold H-shaped links give it a more vintage look.

The 43mm Carrera Racing 1997 Chronograph, on the other hand, is very sporty. It has a brushed black titanium case, ceramic bezel with tachymeter scale, date window, hand- applied black-gold numerals inspired by the dials on a car dashboard, a black folding clasp that has been redesigned to accommodate the high-tech black alligator leather strap that is soft to the touch and stitched with a red thread.

A fitting offensive that is well thought-out and should appeal to a wide audience while at the same time heralding the first chronograph calibre produced entirely in-house by TAG Heuer. We should point out that the average price of the brand has increased quite considerably over the past five years, climbing from CHF 2,500 to CHF 3,500. This is without considering some 350 high-end and high-tech pieces produced each year (V4, Mikrogirder etc...) by the department of Guy Semon, TAG Heuer’s R&D guru.