Vuitton, vertical integration from above


Vuitton, vertical integration from above

LVMH - increased firepowerUnder the leadership of Francesco Trapani, the watchmaking and jewellery arm of LVMH (TAG Heuer, Hublot, Zenith, Bulgari, Louis Vuitton, Chaumet, Fred, de Beers) will be entering this year’s edition of BaselWorld with increased firepower, thanks mainly to the success of TAG Heuer, Hublot and Zenith, and the increasing power of Louis Vuitton watches. The recent announcement that TAG Heuer’s emblematic CEO Jean-Christophe Babin would be transferring to the luxury steamer Bulgari at the end of June 2013 surprised observers, especially given the man of indefatigable dynamism’s close attachment to the “values” of the sporty brand. But it is his undeniable success at the head of TAG Heuer that destined him for this very difficult (and unofficial) mission to bring Bulgari up to the same level as Cartier. This will be a considerable challenge for the watchmaking and jewellery arm of LVMH, which hopes to strengthen its presence in the global jewellery market, a sector that is still split among a multitude of local actors but which is worth some 100 billion euros (against around 60 billion—at retail prices—for luxury watchmaking) and where the margins are very comfortable.

An exceptional watch recently created (and sold) by Louis Vuitton is the perfect example of the brand’s watchmaking strategy. This unique piece costing 520,000 euros does not signal a change in business strategy (the average price of a Louis Vuitton watch is around 5,000 euros) but it is emblematic of the Paris-based company’s increasing watchmaking clout. Created in celebration of the opening of the Louis Vuitton store on place Vendôme (Vuitton thus symbolically entering the heart of French high-end jewellery territory), the Tambour Répétition Minutes Baguette is an example of the “vertical integration from above” desired by Hamdi Chatti, CEO of Louis Vuitton Watches and Jewellery. This minute repeater has a home time function, a day/night indicator and a power reserve display (100 hours) and its movement was produced entirely in-house by the master watchmakers at La Fabrique du Temps, recently acquired by Louis Vuitton, with the case made at the Parisian stone-setting workshops. “We try to do the difficult work internally,” says Hamdi Chatti, “and in this case the challenge was two-fold: how to ensure watertightness for a piece that is fully paved with invisible-set diamonds and whose only visible component that is not diamond is the pusher to activate the minute repeater, which is purely functional? The other challenge: What kind of sound would the case produce?” The result is a beautifully crystalline sound and the issue of watertightness was solved. 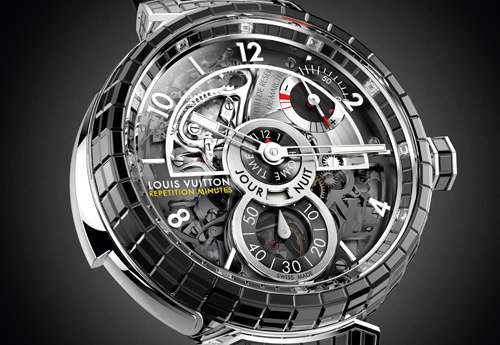 “We want to build up a genuine know-how in watchmaking and work on traditional watchmaking functions but add Vuitton functions to them,” Hamdi Chatti explains. These “Vuitton functions” are closely linked with the central theme of the luggage maker from which the Louis Vuitton brand was born, in other words travel and regattas. Specifically, the forthcoming grouping together of La Fabrique du Temps, the dial maker Léman Cadrans and the assembly workshops under the same roof in Geneva will speed up the increase in horological credibility. A new model to be launched at BaselWorld confirms this. The Tambour éVolution watch quite clearly opens a new era in watchmaking at Vuitton. It has a tighter, more nervous aesthetic and the soft lines of the emblematic Tambour case make way for a more “instrumental” look. This new aesthetic, more technical and more masculine in nature, comes mainly from the innovative material and the very subtle treatment that gives the piece a special shine. The Tambour-shaped case in steel has a vigorous bezel in MMC (Metal Matrix Composite), which is a special type of aluminium with ceramic. This very special ceramic, which is obtained by molecular changes and is used in the valves of Formula 1 engines, does not undergo any alteration despite the extreme friction and high temperature differences that it is subjected to. 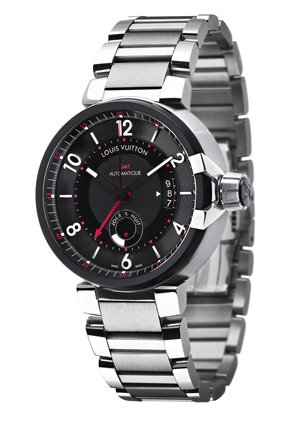