All change at Bulgari


All change at Bulgari

LVMH - increased firepowerUnder the leadership of Francesco Trapani, the watchmaking and jewellery arm of LVMH (TAG Heuer, Hublot, Zenith, Bulgari, Vuitton, Chaumet, Fred, de Beers) will be entering this year’s edition of BaselWorld with increased firepower, thanks mainly to the success of TAG Heuer, Hublot and Zenith, and the increasing power of Louis Vuitton watches. The recent announcement that TAG Heuer’s emblematic CEO Jean-Christophe Babin would be transferring to the luxury steamer Bulgari at the end of June 2013 surprised observers, especially given the man of indefatigable dynamism’s close attachment to the “values” of the sporty brand. But it is his undeniable success at the head of TAG Heuer that destined him for this very difficult (and unofficial) mission to bring Bulgari up to the same level as Cartier. This will be a considerable challenge for the watchmaking and jewellery arm of LVMH, which hopes to strengthen its presence in the global jewellery market, a sector that is still split among a multitude of local actors but which is worth some 100 billion euros (against around 60 billion—at retail prices—for luxury watchmaking) and where the margins are very comfortable.

The management at Bulgari will undoubtedly be hoping to settle down this summer after enduring a human resources rollercoaster ride in the second half of 2012. Since Bulgari joined the LVMH fold in 2011, Francesco Trapani, the great-grandson of company founder Sotirio Bulgari, headed off to Paris to take over responsibility for all of the LVMH watch brands. Trapani, who had spearheaded Bulgari’s move into perfumes and watchmaking, handed the CEO position outside the family for the first time. But his successor, Michael Burke (CEO of Fendi since 2003), barely had time to settle in after taking over in February last year before he was whisked off to replace Jordi Constans as CEO of Louis Vuitton towards the end of the year. After a month in his new position Constans had had to take the sad decision to step down for important health reasons. The fact that long-standing TAG Heuer CEO Jean-Christophe Babin has been nominated as the new CEO of Bulgari (he is set to take over the reins in July) is a clear indication of the strategic importance that LVMH attaches to this recently acquired brand. 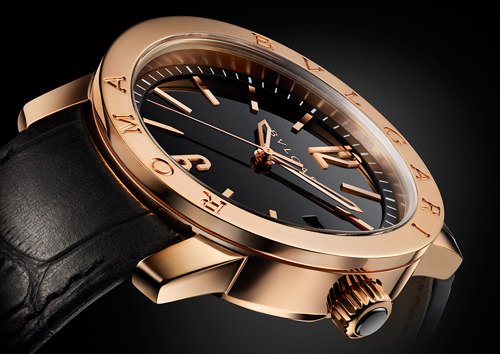 Meanwhile, as head of Bulgari’s watch division, Guido Terreni continues on the charted course. After the major new launch of its Octo collection last summer, the brand returns to an iconic model from the brand’s history as the star of this year’s BaselWorld. The Bulgari Roma, famous for its simple design and plain bezel engraved with the brand and model names in a manner reminiscent of the coins that Roman emperors used to mark their authority, will be reissued in 2013 in what is, by the global brand’s standards at least, a very strictly limited edition of 250 pieces. Like the Octo, whose seemingly simple design nevertheless incorporates 110 different facets on the case alone, the Bulgari Roma model adds a twist to the classic round case with a subtle concave curvature running along the 3 o’clock to 9 o’clock axis. Available exclusively in 18-carat red gold and with a simple black dial with gold hour markers and three hands, as well as a matching black alligator leather strap, the classic Bulgari Roma model is fitted with a proprietary self-winding movement.