In November 2012, China’s new government launched an anti-corruption campaign. And this “good conduct” supposedly has a negative impact on sales of luxury goods, and watches in particular. But is this claim credible?

It all started with a traffic accident on the night of 28th August 2012 in the province of Shanxi. A sleeper coach (commonplace in China) was travelling on the motorway when, suddenly, its “overtired” driver hit a tanker. The resulting fire was horrific and claimed the lives of 36 people.

In the morning, the director of the “Work Safety Supervision Bureau” visited the scene, since the incident came under his responsibility. But the photos of him smiling in front of the smouldering wreckage shocked the Chinese and went viral on social networks. Attention quickly turned to the person himself and Internet searches soon revealed that he always wore luxury watches. The vice began to tighten around DaCai Yang, who was said to own twenty-three luxury Swiss watches, which earned him the nickname “BiaoGe”, or in other words “Mr Watches”. How could this high state official with his annual salary of 170,000 yuan (25,000 Swiss francs) afford to buy Vacheron Constantin, Montblanc, Rolex, as well as many other luxury items that the police discovered at his home? Corruption, of course, to the value of 5.3 million yuan (780,000 francs), according to the investigators!

DaCai Yang at his trial

For this, the Intermediate People’s Court of the province of Shanxi sentenced him to 14 years in prison. We can only hope that the judge let him keep one of his perpetual calendar watches... We have to laugh a little because in China corruption is what makes the world of business go round! The judiciary just needs to turn its attention to any high official to hit the jackpot every time. And the judges are well placed to know this...

The vice began to tighten around DaCai Yang, who was said to own twenty-three luxury Swiss watches, which earned him the nickname “BiaoGe”, or in other words “Mr Watches”.

A pure product of Mao’s revolution, the new President Xi Jinping has always preached in favour of a simple, virtuous life, rejecting pomp and avoiding the abuse of power for personal gain – an image tarnished somewhat by Bloomberg’s revelations of the colossal fortunes of his close relatives.

Be that as it may, he took advantage of the “BiaoGe” scandal to launch the anti-corruption campaign. By definition, this is not a law but a guideline for good conduct that the government has issued to its 7,089,000 officials, almost the equivalent of Switzerland’s population! But can they alone influence the luxury market? In theory, no, because official salaries are modest. It is instead the tens of millions of “civilians” who corrupt influential officials to gain advantages. Highend Swiss watches are the gifts of choice because you can concentrate extraordinary fortunes into a diameter of 40mm and a weight of only a few hundred grammes. And you can buy a precious timepiece in five minutes from any one of the numerous stores in China’s cities – even those in the most remote provinces. This is why Swiss watches are at the heart of this campaign. But is it the campaign that is responsible for the 14.7 per cent drop in sales in the third quarter of 2013 (-6.8 per cent for Hong Kong)? Here, opinions differ.

For luxury watch brands the situation is even worse than that in the fashion industry, since their models are often emblematic and therefore easily recognisable and quantifiable.

For some, the main cause is the slowdown in the Chinese economy, which is largely based on exports and is therefore affected by the global recession. But official statistics record growth in exports for the first half of 2013, a fact that is disputed by Hong Kong and the United States. Furthermore, GDP has not achieved its minimum growth target of eight per cent (+7.6 per cent), which equates to recession for an emerging economy. We are seeing a slow-down in manufacturing job offers, since companies are increasingly offshoring production to South-East Asia, where labour is cheaper.

Beijing cannot inject another 4,000 billion yuan (580 billion Swiss francs) into a plan to relaunch the economy, like it did in 2008, because this would mean printing money, which would devalue the yuan. And inflation and the property bubble, which the State is struggling to control, are veritable time bombs.All this weighs on the consumer confidence index which, although it has increased by four per cent, is buoyed by a boom in consumption in rural areas and second and third tier cities (where there are rich people but only a limited culture of luxury).

The “real” luxury consumers are concentrated in the four first-tier cities (Beijing, Shanghai, Shenzhen and Guangzhou). Parallels can be drawn with automobile sales, which are increasing overall (up 14 per cent in the third quarter of 2013), but with the share of imported vehicles – in other words luxury cars – shrinking by over five per cent. The discrepancy between this figure and the luxury goods segment that watches are part of is explained by the fact that a car, regardless of its price segment, also meets a fundamental need for mobility. In this context, therefore, the anti-corruption campaign would only have a negligible impact.

Fashion industry insiders have noticed a reversal of buying trends, with customers shunning brands with ostentatious logos... The three aforementioned brands maintain a certain level of discretion. For luxury watch brands the situation is even worse than in the fashion industry, since their models are often emblematic and therefore easily recognisable and quantifiable. Furthermore, a watch is the main item of jewellery for men, and Chinese high officials are almost exclusively men. 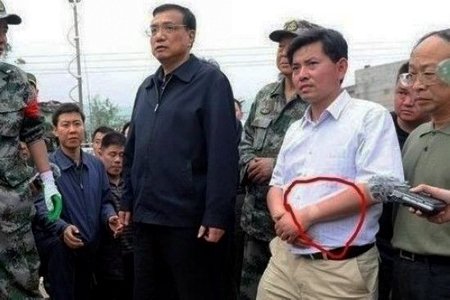 Jiyue Fan
Unfortunately for Jiyue Fan, the characteristic marks left by his suntan piqued the curiosity of the Internet community, which managed to find the model in question, a Vacheron Constantin Patrimony worth 210,000 yuan (31,000 Swiss francs).

The tension is so palpable that the party secretary in a faraway county that was struck by a severe earthquake on 20th March 2013 took the precaution of taking his watch off before facing the media. Unfortunately for Jiyue Fan, the characteristic marks left by his suntan piqued the curiosity of the Internet community, which managed to find the model in question, a Vacheron Constantin Patrimony worth 210,000 yuan (31,000 Swiss francs). Not bad for a minor communist party official in a remote region whose average annual per capita income is below 4,000 francs...

It is impossible to assess the real impact of the anti-corruption campaign on sales of luxury Swiss watches in China. According to Audemars Piguet boss François-Henry Bennahmias, for instance, the closure of six Audemars Piguet stores has nothing to do with it. Chinese customers prefer to do their shopping in Paris, he explains. But China is a jumbo jet taking off and is neither stable nor mature economically and the slightest turbulence has the markets trembling.

Confidence indices are showing the green light, but we must stress that the Chinese have not yet experienced “capitalist” crises. They are, however, most familiar with the government’s collectivist “feng” campaigns, which translates as “wind”. They start off as a strong gust, only to peter out eventually into a faint breeze...