SPORTS WATCHES - Who is going to be a GOOD SPORT?


SPORTS WATCHES - Who is going to be a GOOD SPORT?

After an Olympic Winter Games earlier this year that broke records in terms of its cost if nothing else and a World Cup on the horizon this summer in football-crazy Brazil, the number of new sports watches presented for this year’s BaselWorld seems a little disappointing. Maybe Hublot and the new entrants into the world of football such as Bulova and JeanRichard will surprise us with some new football-related models at the show? And maybe we will see some innovative new models from the brands associated with Formula 1? Until then, the pickings seem slim – unless you are a fan of pilot’s watches or you’re looking for an affordable new version of an iconic design…

DWISS is not a name that trips off the tongue (it is an abbreviation of Design Watch Independent – Switzerland). This relatively young brand, which is based in Lugano, in the Ticino region of Switzerland, was set up by Brazilian designer Rafael Simoes, who is based in Milan. There is more than a whiff of Hublot to the brand’s designs, which mimic the design of the Big Bang with a sandwich construction and a rubber strap that integrates directly into the case, as well as a bezel affixed with screws. But the brand is not without its own innovations, having produced the world’s first watch in Niobium (actually the alloy Nb1Zr, which contains 1 per cent zirconium), a naturally occurring mineral that is both hypoallergenic and shock-absorbing, in conjunction with the world’s biggest miner of the mineral, the Companhia Brasileira de Metalurgia e Mineração (CBMM). 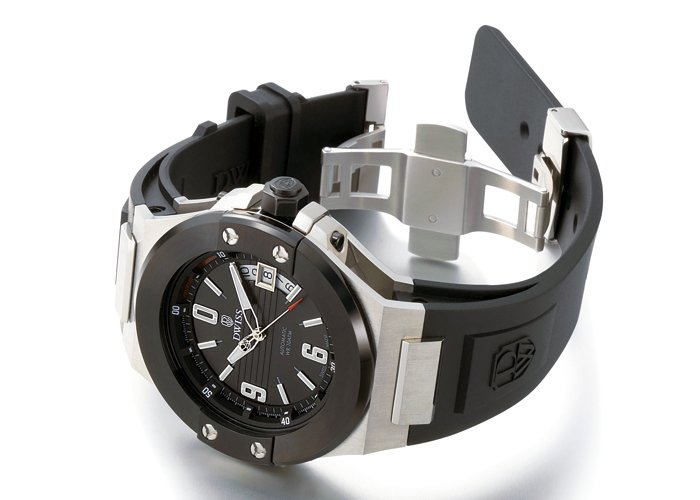 After testing the waters by launching the brand first in his native Brazil, Mr Simoes will be taking orders for his first collection for the international market, the Emme, at BaselWorld. Just like the Big Bang, its sandwich-style construction lends itself perfectly to different combinations of colours and materials, as shown by the “Silver Black” model illustrated, which has a 43mm diameter stainless-steel case with a black PVD bezel and an integrated black rubber strap with a steel folding clasp. The timekeeping is provided by an ETA 2824-2 calibre self-winding movement, which offers a power reserve of 42 hours and the Emme is water resistant to 100 metres / 330 feet. 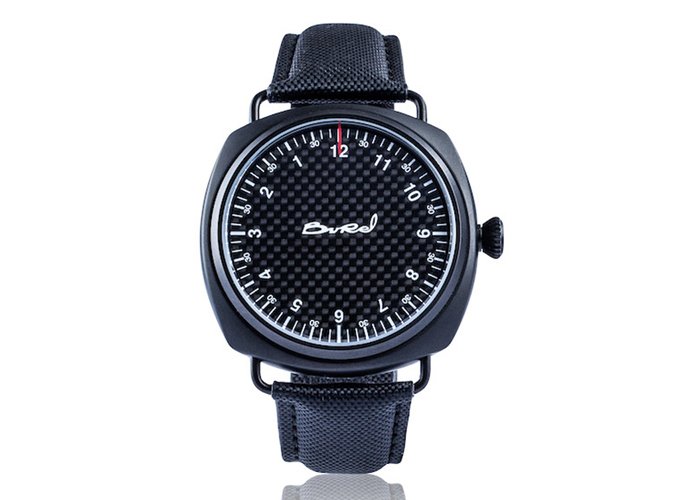 French brand Burel is another newcomer with a design that bears an uncanny resemblance to an existing, well-known luxury brand. Here it is the distinctive shape of the case and crown, as well as the wire-loop strap attachments, that seem to have been “inspired” by Panerai’s 60 year-old Radiomir design. But like DWISS, Burel (the brainchild of Guillaume Burel), adds its own unique touch to the watch. For on this “Class Cape” model there are no hands at all. In a configuration that was inspired by compasses used for marine navigation, the time is instead displayed by a single carbon disc that forms the dial, which completes one revolution in twelve hours. Graduations for the hours and 30 minutes allow the time to be read off against a discreet red indicator at 12 o’clock. It is, however, the distribution model for this new watch that is most intriguing, because it is being offered on the crowdfunding platform Indiegogo. “Early bird” purchasers could even benefit from a reduction of 370 euros on the recommended retail price of 920 euros.

RACING IN THEIR BLOOD

Motor racing fans will immediately recognise the striking light blue and orange colours of Gulf Oil international on the latest model from French brand Bernard Richards Manufacture (BRM). Gulf has been involved in the world of motorsport since the 1960s but it is only since 2011 that there has been an officially licensed timepiece bearing the distinctive colours thanks to the partnership with BRM. The BT6-46-Gulf model is limited to 100 and features the distinctive Gulf colours as a band that dissects the dial vertically and continues along the strap. This lightweight model in grade 2 titanium is powered by the ETA 2824-2 self-winding movement with 38 hours of power reserve. 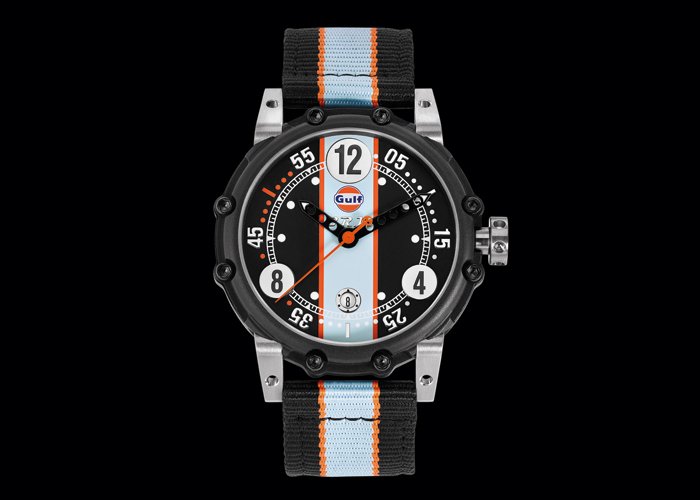 Lightweight is also the order of the day with Tissot’s new T-Race Touch model in aluminium. The brand has a strong heritage in motorsports, in particular through its sponsorship of the MotoGP motorbike racing series. But Tissot also boasts a unique technological prowess with its tactile watch crystals (Tissot was the first brand to present tactile watches 15 years ago) that can be used to activate numerous functions of the quartz movement – in the case of the T-Race Touch no less than 11 different functions, including chronograph, lap times and even a logbook function for the avid racer to keep track of their progress. The lightweight case comes in a variety of colours and a synthetic strap keeps the weight down even further. 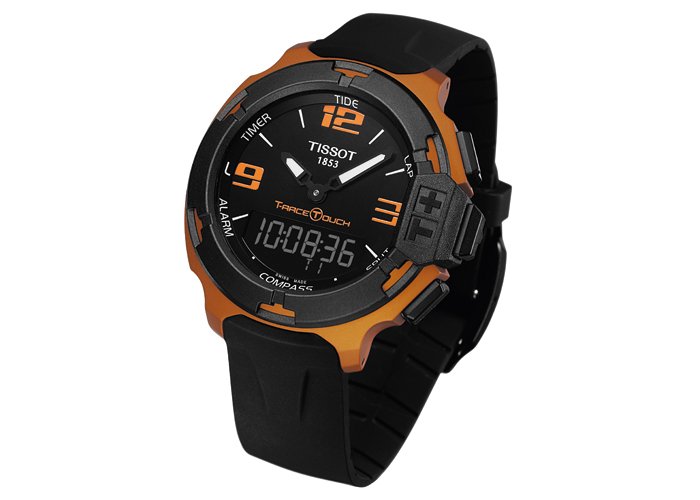 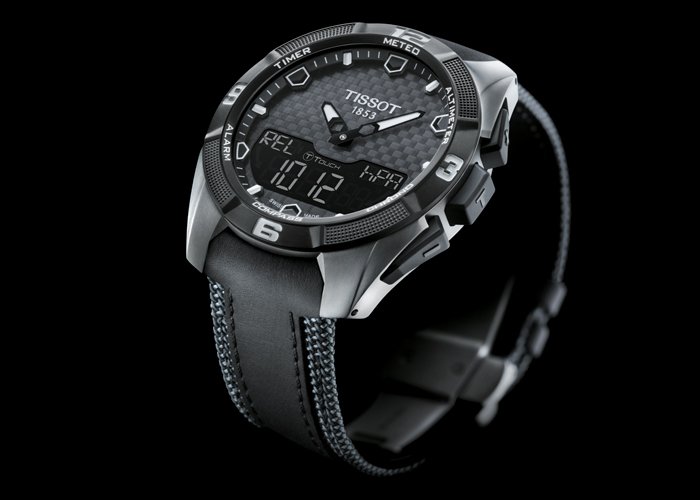 For BaselWorld this year, Tissot presents a further innovation with the world’s first solar-powered touch-screen watches. The Tissot T-Touch Expert Solar is yet another lightweight piece, with a titanium case with black PVD coating and a choice of different straps. Its quartz movement offers almost every conceivable function that one might require in daily life or various sporting activities: perpetual calendar with day and week number, two alarms (one for the week, the other for the weekend), two time zones, weather forecast with relative pressure, altimeter with difference meter, chronograph with lap and split times and logbook, compass, timer, azimuth, regatta function and backlight.

HEADS IN THE CLOUDS

While the Swiss air force celebrates its centenary in 2014, the watch brand most associated with pilots and aviation, Breitling, focuses on the 50th anniversary of Switzerland’s Patrouille Suisse aerobatic team with a special limited edition of its Chronomat dual time model. Its distinguishing features are the flight team’s logo on the small seconds subdial at 9 o’clock and the central second time zone hand which has a red tip in the shape of the F-5E Tiger II plane used by the Patrouille Suisse (which is one of the rare aerobatic teams to fly supersonic jets). A 24-hour scale with inlaid numerals in black rubber on the bi-directional steel bezel allows a third time zone to be read, while timekeeping is provided by Breitling’s proven B04 calibre self-winding movement with COSC chronometer certification and over 70 hours of power reserve. 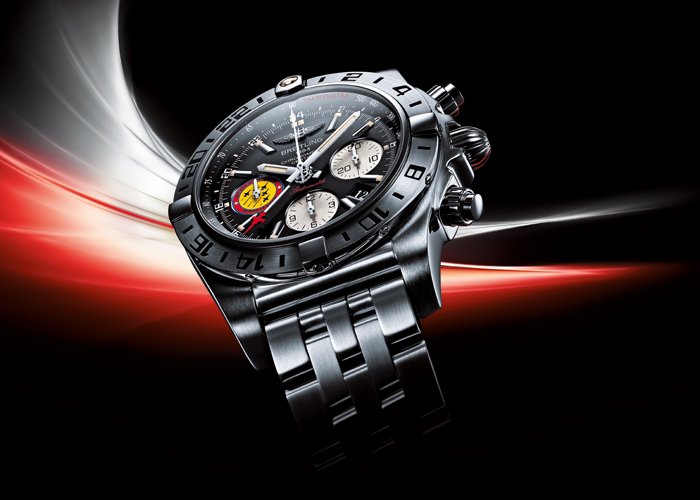 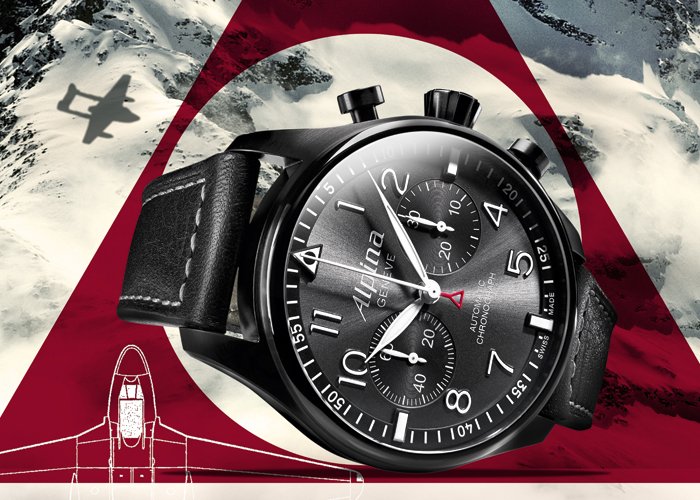 Alpina, the sister brand of Frédérique Constant, also builds on its history of supplying aviation watches to continental air forces with two new Startimer models, the Startimer Pilot “Black Star” and the Startimer Pilot Automatic “Sunstar”. Both names speak for themselves, with the former being a large 44mm piece that combines the traditional look of a pilot’s chronograph with the modern appeal of a “stealth” case in stainless steel with a black PVD coating and the latter having a more classic 40mm brushed steel case with a sunbrushed grey dial. Both models have typical oversized pilot’s watch crowns and the signature Alpina triangle applied at 12 o’clock on the dial and, in red, as a counterweight to the central seconds hand.

FOR THE MURKY DEPTHS

Victorinox celebrates its 25th anniversary in watchmaking this year with a new chronograph model in its Dive Master 500 collection. This limited edition of 500 comes with a lightweight yet robust grade 2 titanium case and bracelet in sandblasted matt grey - a colour that continues on the dial to give a very masculine monochrome look. Head down to the murky depths of the ocean (the watch is water resistant to 500 metres), however, and the copious use of luminescent material on the hands, dial and bezel brings the indications to life against the dark background, with different colours for the indications that refer to the hours and minutes. A consummate diver’s watch, complete with screw-in crown and pushers, helium escape valve and a uni-directional rotating bezel with dive-time scale, the Dive Master 500 chronograph is also equipped for the first time with a mechanical movement: the ETA 2894-2, which is visible through a transparent case back. 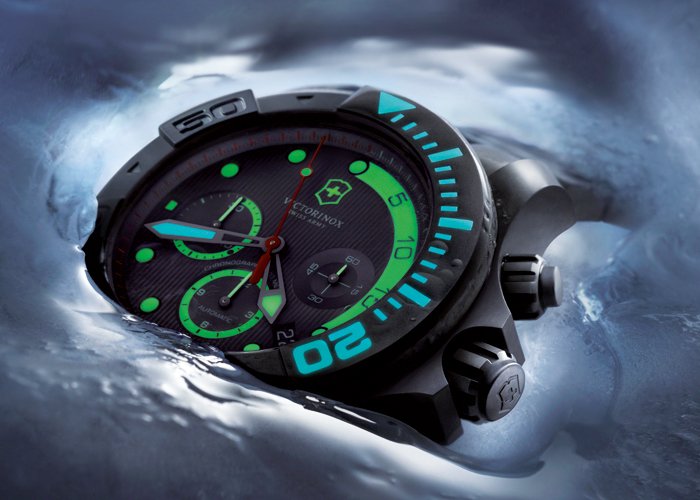 Given the classic and vintage styling of many of these sports watches, it almost seems as though the trend towards classicism, simplicity and understatement that we saw at this year’s SIHH might be set to continue at BaselWorld. Time will tell.