In its fourth year, the Geneva Time Exhibition (GTE) will be presenting itself in a different light, with an emphasis on quality rather than quantity. Exhibition director Florence Noël has confirmed that the number of exhibitors is unlikely to exceed fifty and that only “selective” brands will be present.The exhibition will nevertheless welcome its first major group, in the form of the Groupe Frédérique Constant, which now covers the three brands of Frédérique Constant, Alpina and Ateliers de Monaco (see our separate article on Frédérique Constant in this issue). Other names exhibiting for the first time are DeLaCour, Jordi Swiss Icon, Milus and RSW. A special area, called “The Avenue”, will be dedicated to these first-time exhibitors at the show. For the first time, the general public will be admitted to the show on its last day, a move that was not easy to push through after it first met with some resistance from the brands according to Florence Noël: “At first the brand’s weren’t very keen on the idea because they needed to be able to concentrate on sales without any distraction. But now the public will be admitted on the last day of the show, when it will be a little quieter. This will give watch fans a chance to see some of the rarer pieces on the market.”Not all brands will be concentrating 100 per cent on sales, however. Cyrus watches co-founder Laurent Lecamp sees the show as an excellent opportunity to present his collection to the press. “I think it is an ideal opportunity to invite journalists,” he says, “because they have more time available than they do in Basel, where they are often stressed. The atmosphere is much calmer, which makes it a lot better for discussion.”Since registration for the exhibition is open-ended, there will not be a definitive list of exhibitors until shortly before the show opens in January next year. We therefore offer here an overview of what to expect from some of the brands that have already confirmed their presence.

Cyrus Created by “double cousins” Julien and Laurent Lecamp and backed by an anonymous private Swiss investor, Cyrus watches debuted in 2011 as a brand suffused with references to ancient empires. The company is named after the Persian king Cyrus the Great (c. 600 BC) who is credited with being the first emperor to show respect for the religions and customs of the lands he conquered. The brand’s Klepcys timepiece features Cyrus’s own in-house CYR598 calibre to power its innovative display, which has two patents pending. Developed by Jean-François Mojon (the man behind Harry Winston’s Opus X), with whom the brand has signed a long-term contract for movement design and manufacture, this calibre displays the hours and the date on patented retrograde scales and the minutes and seconds on two centrally mounted concentric discs. It also has an innovative moon phase indicator in the form of a three-dimensional stationary moon that is gradually covered by a black hemisphere to indicate the moon phase. Cyrus’s least apparent design trait is perhaps its most significant, as Laurent Lecamp explains: “A flat watch on a wrist has no logic. Just as Cyrus the Great conquered the world, we wanted to conquer people’s wrists. After more than two years of development work we have a patented design that fits the wrist perfectly, regardless of whether small or large.”Production of Cyrus timepieces is limited to 188 pieces for each reference—all identified by a limited-edition number hidden under the second screw-in crown at 9 o’clock. Further-more, all gold models feature a replica of a gold coin minted for Cyrus the Great. Laurent Lecamp travelled the world over a period of several months to track down the original of this 2,500 year-old coin and purchased it for the brand. 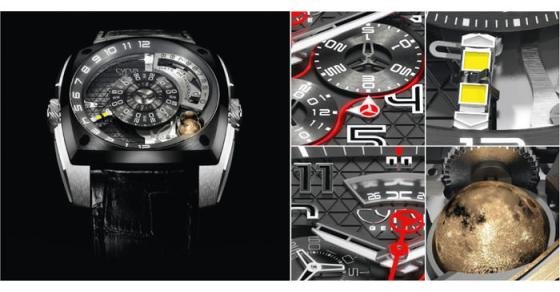 Dietrich  Emmanuel Dietrich was born in the French watchmaking town of Besançon. But while his native town is enjoying a renaissance in watchmaking (see our article “The resurrection of Besançon” in Europa Star 05/11), Dietrich opted for the Swiss Made appellation for his eponymous collection of watches launched in 2011.Having worked as a freelance designer for clients in various sectors, the man behind the famous Hermès “Harnais” has been designing solely in the fields of watchmaking and jewellery from 2005 and in 2010 found the ultimate independence in his creative expression with his own brand. His first two timepieces could not be more different. One is a classic small seconds watch in stainless steel or gold with solid gold hour markers and a transparent case back that reveals a 16 ½-line manually wound ETA 6498 calibre. With a matching alligator leather strap, this understated piece is the perfect companion for a smart suit at a gala dinner and is called simply—and appropriately—“Night”.The second model, “Snow”, is specifically designed for wearing on the piste and will appeal to anyone who understands the difficulty of checking the time when wearing skiing gloves and a thick jacket. The Snow elegantly solves this problem with an elastic strap attached to four separate lugs so that the watch can be worn over the top of a ski jacket. The simple black dial has just two hands, for the hours and minutes, finished in a bright-green SuperLuminova. The watch is also supplied with a separate adjustable leather strap so that it can be worn directly on the wrist for the après-ski. 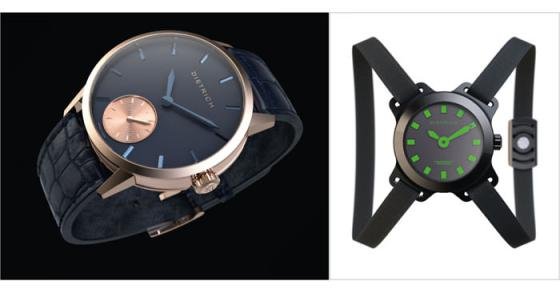 Jordi Swiss IconFollowing the success of his “Clip” watch launched back in 1986, the “Swiss Ethno Watch” in 1988 and his move into haute horlogerie with the “Twins Héritage” collection from 2004, Michel Jordi is back with his Jordi Swiss Icon collection that will be presented to the watchmaking community for the first time at the GTE.“I didn’t like the site of the Geneva Time Exhibition last year and it didn’t fit with our image of accessible luxury,” Michel Jordi says. “Our average price is around CHF 7,000. We did consider going into a hotel but we realised that it’s very difficult for people to run around all those different hotels. When I saw that the Geneva Time Exhibition had changed its site and it was more prestigious, I decided to go there.”The Jordi Swiss Icon collection is inspired by pebbles that Jordi found in the Rhone valley after crossing the Furka pass. “I saw these pebble stones that were so round and when you touch them they are so smooth,” he explains. “So my idea was to make a watch as smooth as a pebble stone.”A traditional Swiss scissor-cutting design is used for the brand identity and features on some of the watch dials and all of the bracelets. Because Jordi felt that the small area of the dial alone did not do sufficient justice to this traditional design, he has also developed an entire range of accessories with the same motif, including leather goods and clothing to support the promotion of the watches.The timepiece collection comprises the Mega Icon with small seconds and GMT, using quartz movements, as well as automatic models with small seconds or chronographs. All models have a big date window and a distinctive crown in which the Swiss cross is embossed tone-on-tone in a red-coloured recess. In the mechanical models, a patented Dubois Dépraz 360-degree rotor is used with a traditional Swiss rose design at the centre. Jordi is also set to present a new manufacture movement at the GTE. It will have an alarm function and retail at around CHF 50,000.The brand is already stocked by 10 retailers in Switzerland, including the main winter resorts, with five more expected to come on board by the end of the year. A Jordi Swiss Icon flagship opened its doors in the heart of Zurich at the end of November. The GTE will determine whether these very Swiss timepieces also find an international audience. 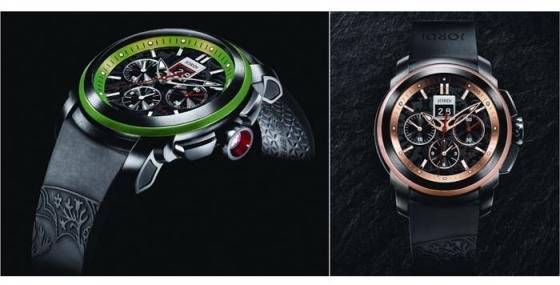 Louis MoinetA successful 2011 has seen two products from the company based in St. Blaise, near Neuchâtel—the Tempograph and the Jules Verne mobile lever chronograph—pick up prestigious Red Dot design awards. Their latest offering is the Astralis, a limited edition of 12 pieces in 18-carat red gold with three complications: an astral tourbillon, a split-seconds column-wheel chronograph and a 24-hour planetarium display.The Astralis exhibits all the Louis Moinet DNA, including the signature case design, the registered Côtes du Jura motif on the dial and the “dewdrop” hands. But this timepiece sets itself apart through the use of some of the rarest materials known to mankind. The planetarium display at 6 o’clock incorporates material from four meteorites to represent the sun, the moon, Mars and Mercury. The price per gramme of a Martian meteorite, such as the Jiddas al Harasis 479 that provides the material for the Astralis, is higher than that of gold, platinum and diamond combined. Furthermore, the material used to represent Mercury comes from a meteorite (thought to come from the planet Mercury) that is estimated to be 4.566 billion years old. The beautifully-crafted LM27 calibre visible through the sapphire crystal case back shows off the hand-engraved tourbillon bridge, which is made of aventurine (a type of quartz), as well as the hand-engraved rattrapante bridge and the blued-steel column-wheel that operates the chronograph functions. 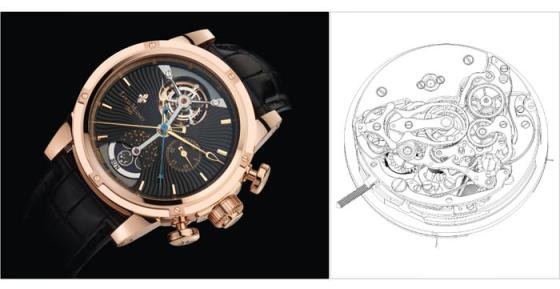 Magellan Mario G. Nargi bought the watch company named after the intrepid explorer Ferdinand Magellan just one week before last year’s GTE exhibition. Since then he has extended the collection from one reference to include numerous models and interpretations based on the unique Magellan design that has a highly domed sapphire crystal and hemispherical dial.The design lends itself to interpretations of the earth, the sky and the planets but has also proved ideal for an original interpretation of the lucky number eight so prized by the Chinese consumer, in the form of a black 8-ball from the game of pool (also the company’s first watch to sport a steel bracelet). Mr Nargi has plenty of ideas for developing this design further, including depictions of the oceans and a couple of more extravagant and highly original designs that it is too early to present in detail but which will undoubtedly make waves on their debut at BaselWorld 2012. In the meantime, GTE 2012 will act as the launch platform for two new models, one featuring a hand-engraved and hand-painted moon dial and another using a meteorite design. The distinctive shape of the dial also lends itself perfectly to personalisation and Magellan produced a special piece for Oman in celebration of the country’s 40th anniversary, with a hand-painted map of the sultanate on the dial.Mr Nargi is happy with the development of the brand over the past year and is certainly in no hurry to overstretch himself. “We are here to stay and I am looking at things over a horizon of 10 years,” he says. “Our aim for the near future is to consolidate our existing markets. We aim to work with retailers who are looking for something different and exclusive but who nevertheless stock high-end timepieces and have a good knowledge of watchmaking and its culture.” 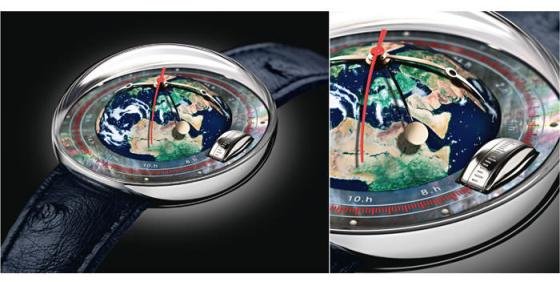 The Geneva Time Exhibition takes place from 15-20 January 2012 at the Espace Hippomène in Geneva. The exhibition confers its own “SuperWatch” award, which is decided by a panel of experts from the specialised press and the retail world.