Excellent Performance for LVMH in 2012

Excellent Performance for LVMH in 2012

LVMH Moët Hennessy Louis Vuitton, the world’s leading luxury products group, recorded revenue of €28.1 billion in 2012, an increase of 19% compared to 2011. This includes the integration of Bulgari as of June 30, 2011. Organic revenue growth was 9%. All business groups saw excellent momentum in Europe, Asia and the United States. Louis Vuitton, in particular, once again recorded double-digit revenue growth during the year.

Revenue increased by 12% in the fourth quarter, compared to the same period in 2011, with organic revenue growth of 8%. The last quarter saw a modest increase in growth compared to the third quarter of 2012.

Profit from recurring operations increased by 13% to €5 921 million, a performance which is even more remarkable when compared to the strong growth in 2011. Current operating margin was 21% in 2012. Group share of net profit was €3 424 million, an increase of 12% compared to 2011.

Bernard Arnault, Chairman and CEO of LVMH, said: “2012 was another remarkable year for LVMH, especially in the context of the economic slowdown in Europe. All of our businesses demonstrated excellent momentum driven by innovation and the quality of their products, thereby strengthening their positions in traditional markets while continuing to develop in new ones. Looking beyond the appeal of our brands, it is the talent of our teams and their motivation that enables us to so effectively execute our strategy. In 2013, LVMH intends to further strengthen its global leadership position in high quality products by relying on its sound, long-term strategy.”

• Strong momentum in the United States 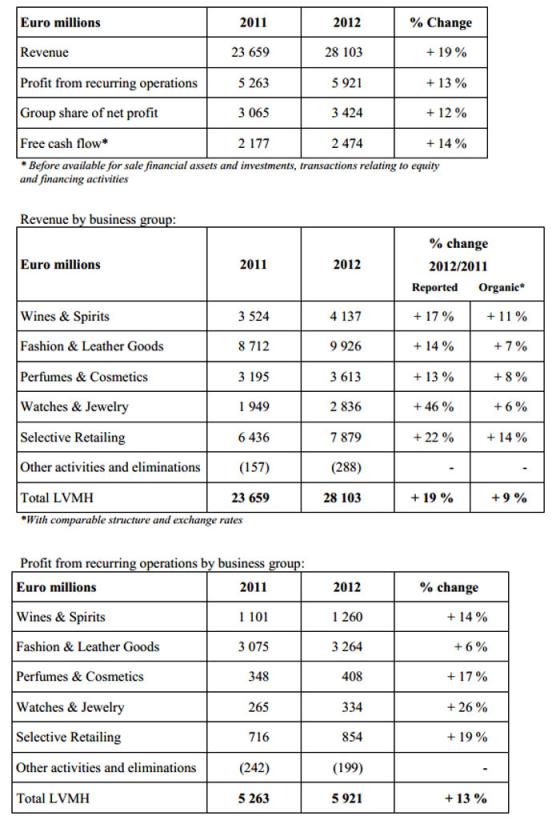 The Watches & Jewelry business group recorded organic revenue growth of 6% in 2012. Profit from recurring operations rose 26% notably due the performance of Bulgari, consolidated as of 30 June 2011. LVMH watch brands experienced good momentum supported by many innovations and the excellent performance of their iconic models Carrera by TAG Heuer, King Power by Hublot and El Primero by Zenith. In Jewelry, Bulgari confirmed the success of its Serpenti and B.Zerol collections, enriched by new creations, and reinforced the quality of its distribution. Chaumet and Fred continue to develop their star collections.

Favorable outlook for LVMH in 2013

Despite an uncertain economic environment in Europe, LVMH is well-equipped to continue its growth momentum across all business groups in 2013. The Group will maintain a strategy focused on developing its brands by continuing to build up its savoir-faire, as well as through strong innovation and expansion in fast growing markets.

Driven by the agility of its organization, the balance of its different businesses and geographic diversity, LVMH enters 2013 with confidence and has, once again, set an objective of increasing its global leadership position in luxury goods.

The LVMH Board met on January 31 to approve the financial statements for 2012.