It was only in the mid-2000s that Jaquet Droz regained a strong identity by delving into its archives and rediscovering a watch from 1785 – a model whose style has now become the brand’s backbone. This is confirmed by the new releases for 2019.

It was only in the mid-2000s that Jaquet Droz regained a strong identity by delving into its archives and rediscovering a watch from 1785 – a model whose style has now become the brand’s backbone. This is confirmed by the new releases for 2019.
I

n April 2000, Swatch Group added a new brand to its portfolio: Jaquet Droz. Major changes were happening then in the luxury watch sector, and the group’s intention was to strengthen this segment further after the acquisition of Breguet in 1999.

At that time, Jaquet Droz had come a long way. From 1991, the brand was owned by Investcorp (which then also owned Breguet, Ebel and Chaumet), which in 1995 sold it to François Bodet and Yves Scherrer (both of whom had previously worked for Breguet). Then, at the very beginning of 1999, financial company Cupola Venture Partners Ltd (officially domiciled in the Cayman Islands), with Anglo-Saxon and Arab capital, took control of Montres Jaquet Droz alongside private Swiss shareholders. It was from this group of investors that the Swatch Group acquired the brand.

What exactly could be done with this great name in watchmaking, which had historically specialised in automata, and whose output of wristwatches and pocket watches remained relatively obscure? 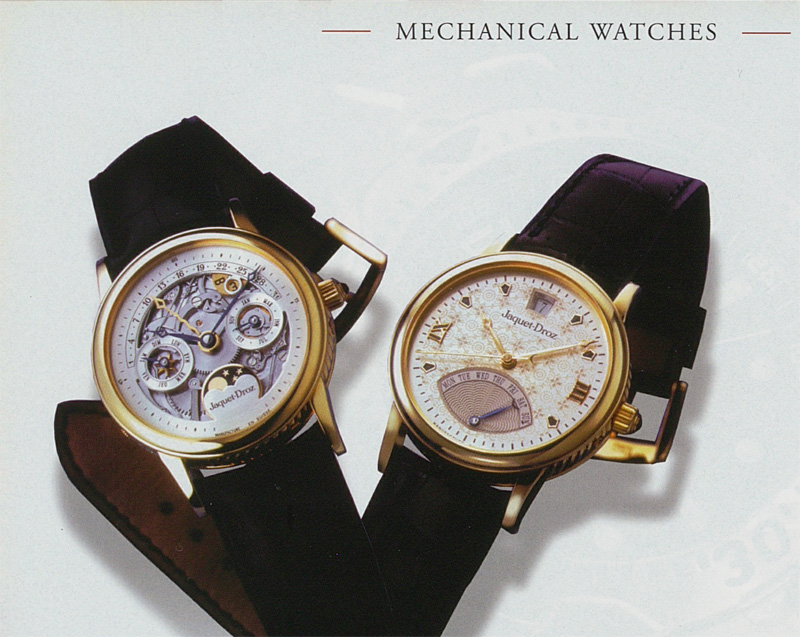 In fact, a few short years were enough to give Jaquet Droz a distinct identity in the luxury watch segment.

As shown in the image below, in 2002 Jaquet Droz was still offering a “tonneau”-shaped watch with no specific identity, similar to so many other watches of the time. This timepiece gave no hint of the direction the brand would later take. 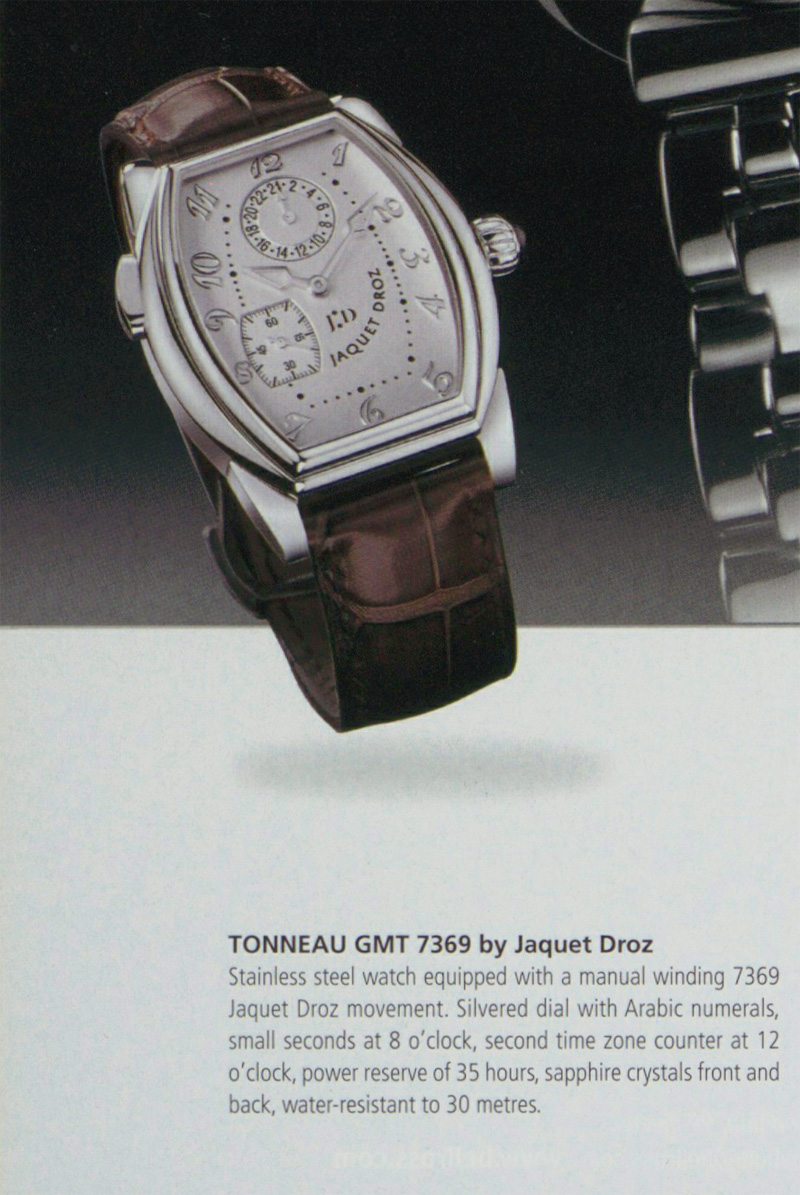 Towards the definition of a recognisable style

In 2003, the Grande Seconde timepiece made its appearance. It made a splash with its stripped-down classicism and the arrangement of its enlarged “small second”. It was to be the basis of a new watch line with the distinctive styling that is so familiar to this day.

This line was directly inspired by a superb pocket watch dating from 1785 (yet more proof of how useful archives can be!), whose simple geometric design was key. 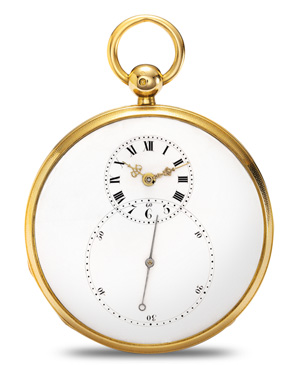 The pocket watch of 1785 that would change Jaquet Droz’s contemporary destiny. 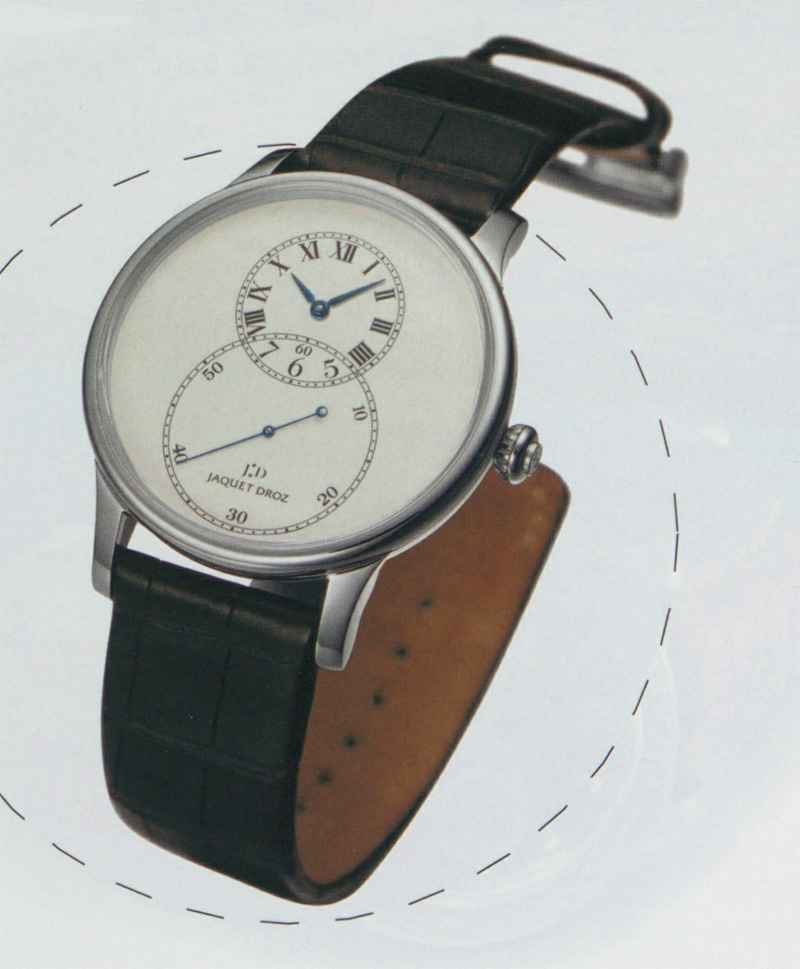 In the following years, this stylistic matrix gave rise to a number of variations that would come to define the brand’s image and identity. 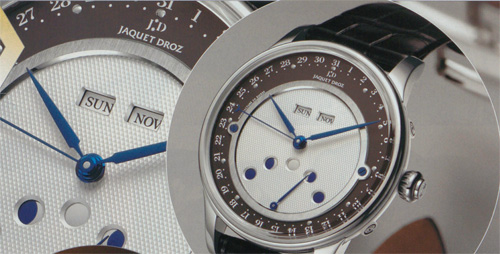 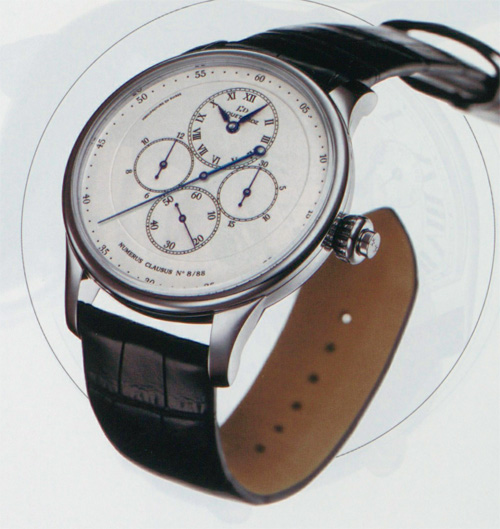 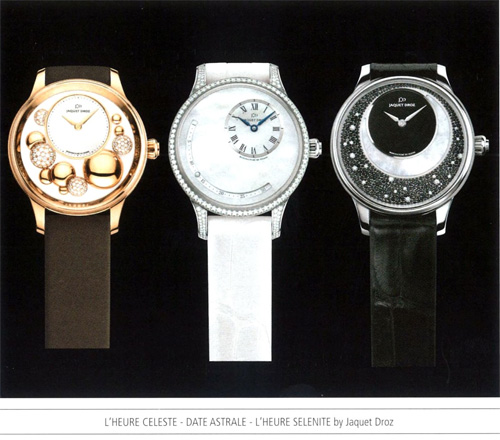 The Eclipse watch, which appeared in 2010. 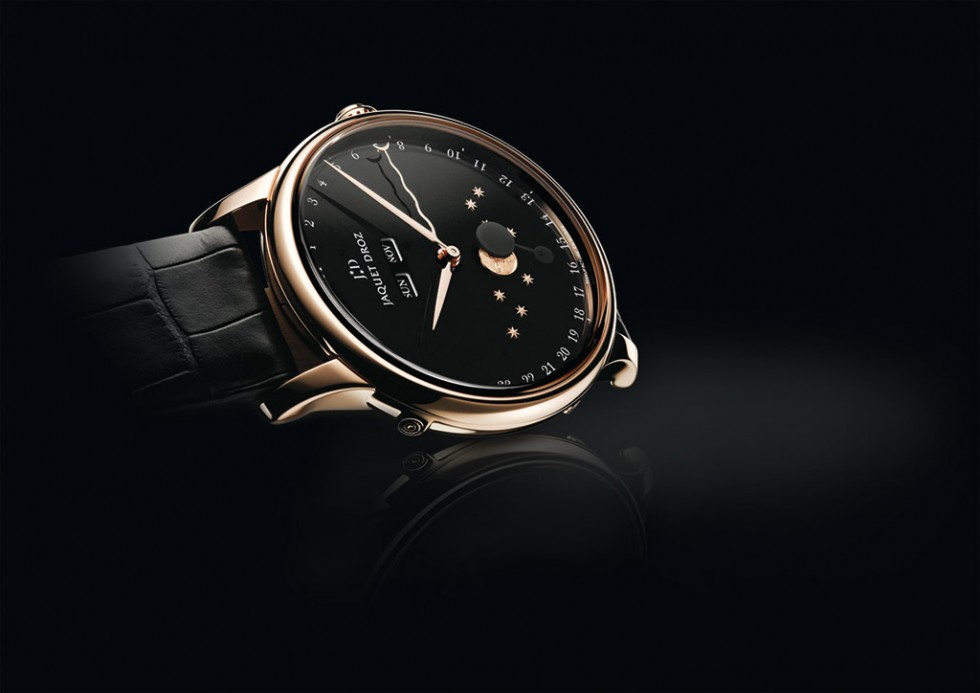 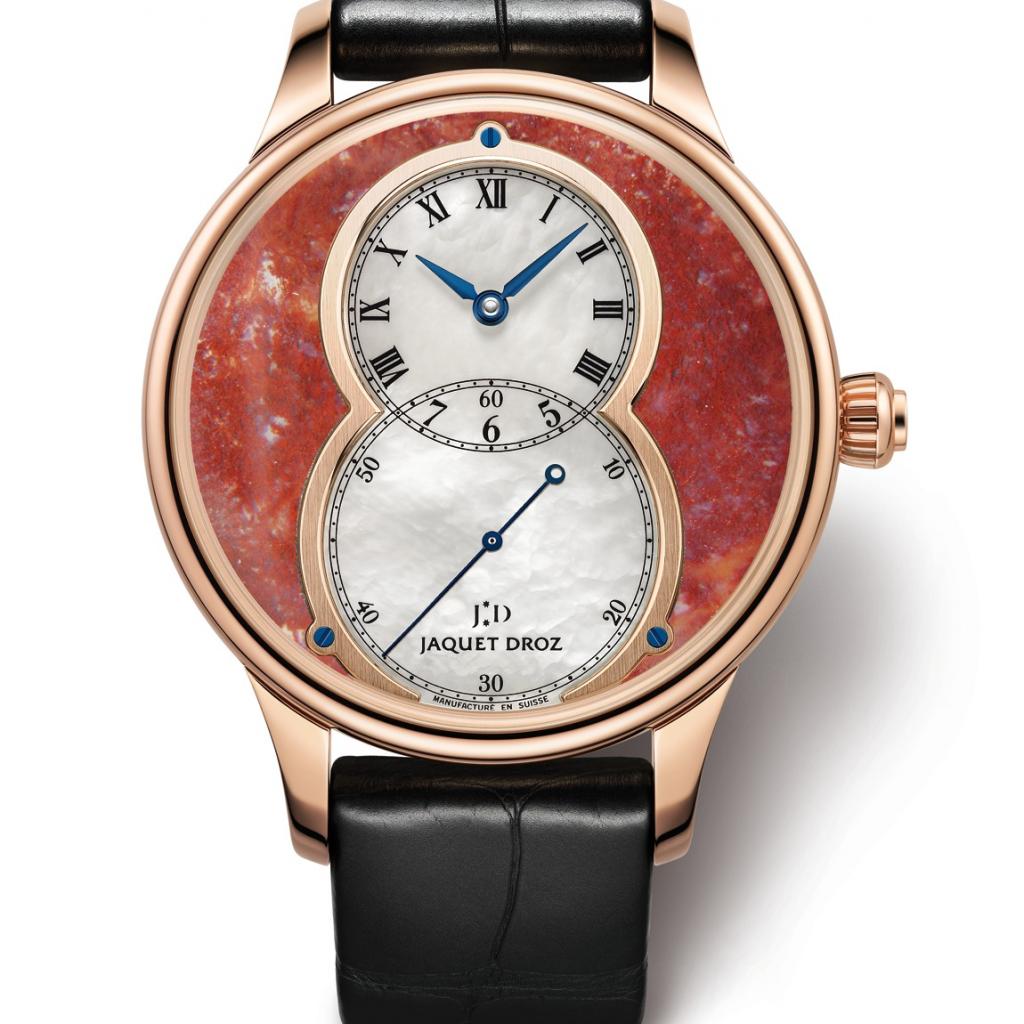 The 2019 offering is consistent with this past evolution. Among its variations, Jaquet Droz already released a single-pusher chronograph (see album above). But this is the first time that this useful function has appeared among the complications of the Grande Seconde flagship model.

Four versions of the Grande Seconde Chronograph stand out: an inaugural 88-piece limited edition in red gold with an ivory-coloured Grand Feu enamel dial, with Arabic and Roman numerals in Petit Feu enamel. The retrograde hour, minute and date hands are in red gold, contrasting nicely with the blued steel chronograph hands.

Three versions also feature in the current collection, in 43 mm stainless steel, with a blue or taupe dial in sanded silver, whose grain is given a particular quality thanks to dry hand sanding.

In addition, these three versions are distinguished by an off-centre dial and a monopusher crown at 4 o’clock.

The movement behind the Grande Seconde Chronograph, with its column wheel and silicon hairspring, has been completely redesigned to adapt to the particular geometry of this off-centre design. 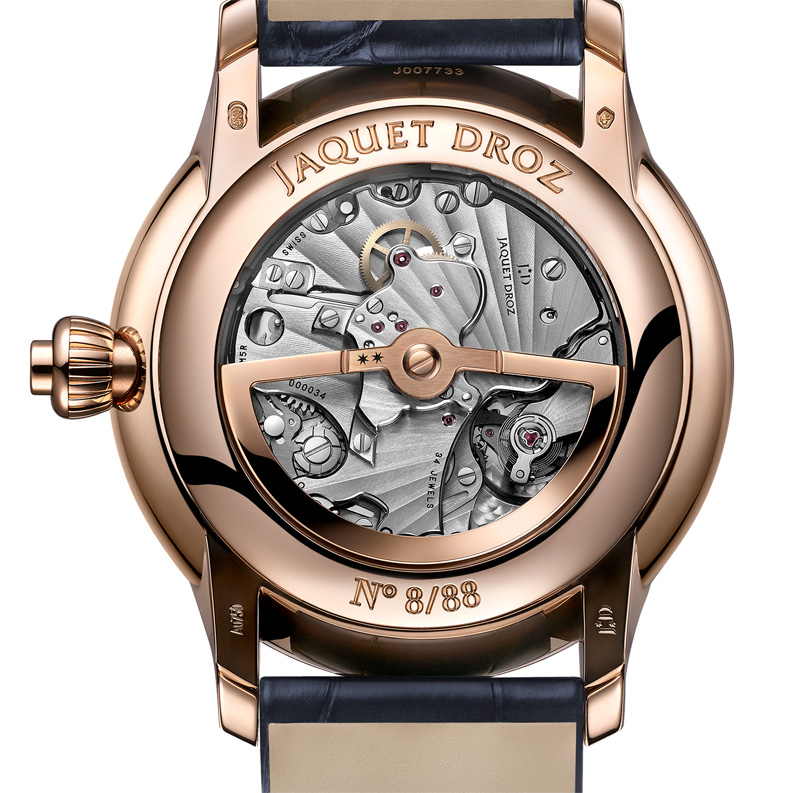 In 2016, Jaquet Droz introduced a Dual Time in its Grande Seconde collection. This very classic watch is undergoing a significant evolution this year, which sees its aesthetics profoundly modified, while its automatic mechanical calibre remains the same.

The aesthetic difference is the presence of a world map representing the continents seen from the North Pole (a “polar azimuth” projection), whose powdered finish gives the surface a particular grain that makes them appear to stand proud.

Another aesthetic innovation is that domestic time can be read over 24 hours, divided into two 12-hour segments that make it possible to differentiate between day, in white, and night, in black.

The local time is read from the upper part of the dial and is set by jumping one hour, causing the date to change.

In 1965, Jaquet Droz was proud to be able to present “an incomparable collection of more than 1,000 high-class models”, as stated in an advertisement published in Europa Star 2/1965. But at the time, 150 “selected” factories, united in the Coopérative de Fabricants Suisses d’Horlogerie, presented their production under the shared name of Jaquet Droz who, it is worth remembering, was the inventor of the watch “factory”. Not many people know that. 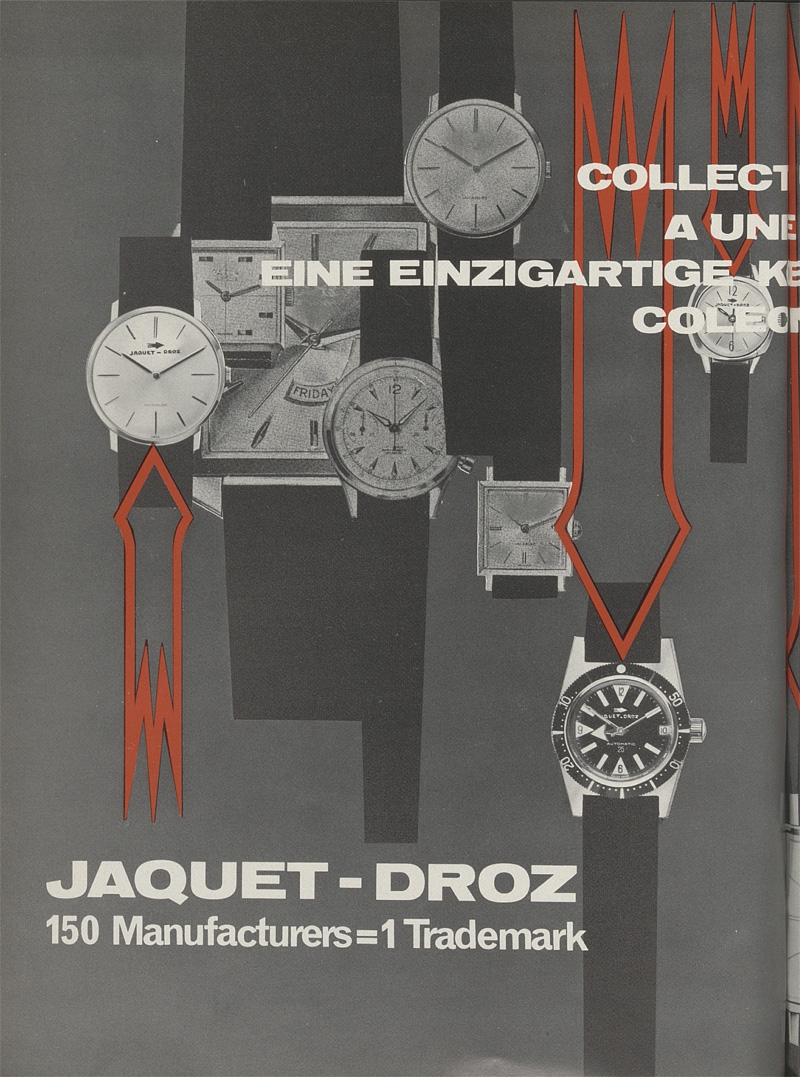 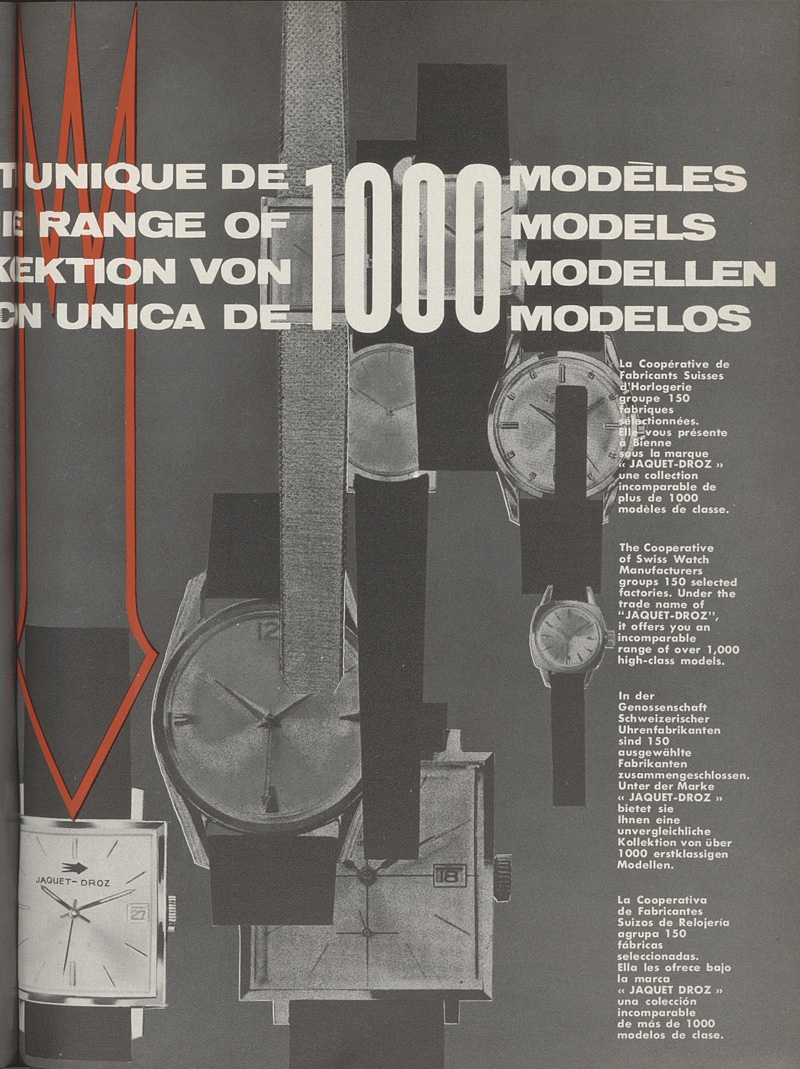 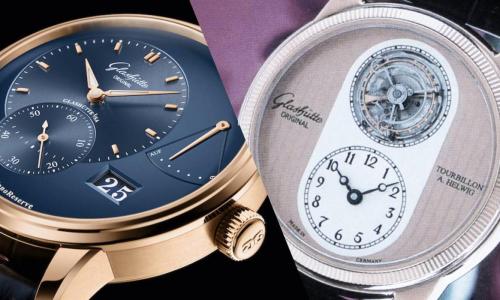 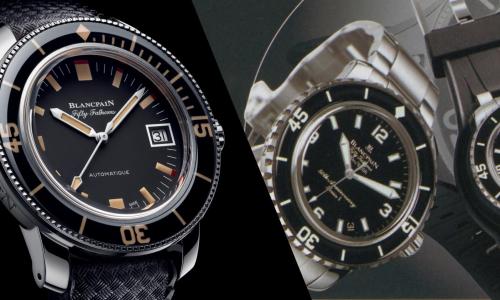 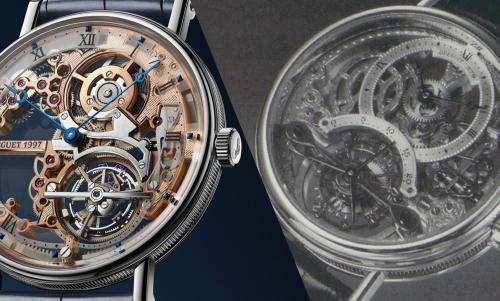 TIME.BUSINESS While Frédérique Constant is much talked about as one of the rare Swiss brands to offer smartwatches, the brand remains focused on the mechanical watch, (...)

THE WATCH FILE On an object that measures just a few centimetres across – a watch – the shapes and lines can sometimes end up looking disturbingly similar... even when (...)