Physical travel may have been interrupted, but we have never calculated so many time zones from home, what with all the Zoom meetings and remote sessions. Maurice Lacroix had no hesitation in launching the AIKON Venturer GMT in 2021, a coherent new addition to a collection that has become the brand’s mainstay over the past five years. This line has enabled the DKSH watch company to weather the pandemic without undue damage, even returning to the black for the second year in a row in 2020.

Physical travel may have been interrupted, but we have never calculated so many time zones from home, what with all the Zoom meetings and remote sessions. Maurice Lacroix had no hesitation in launching the AIKON Venturer GMT in 2021, a coherent new addition to a collection that has become the brand’s mainstay over the past five years. This line has enabled the DKSH watch company to weather the pandemic without undue damage, even returning to the black for the second year in a row in 2020.
A

fter several difficult years, Maurice Lacroix has found its rhythm, at just the right time. Just before the start of the pandemic, the Swiss brand, owned by retail giant DKSH (with an annual turnover of more than 10 billion francs), had just recorded a profit, after a long period of lean years. This success was the result of a patient process of reconstruction, focused in particular around the AIKON line, launched in 2016 as a contemporary reinterpretation of the popular Calypso of the 1990s.

At a time when steel sports watches are more popular than ever, Maurice Lacroix has found in the AIKON, first issued in quartz and then reinterpreted in automatic, skeleton, ladies’ and chronograph versions, a masterpiece in its core range, the 1,500-3,000 franc segment, in which it competes with brands such as Longines, TAG Heuer, Baume & Mercier and Frédérique Constant. In 2019, Maurice Lacroix introduced a new line within the AIKON collection, the Venturer. 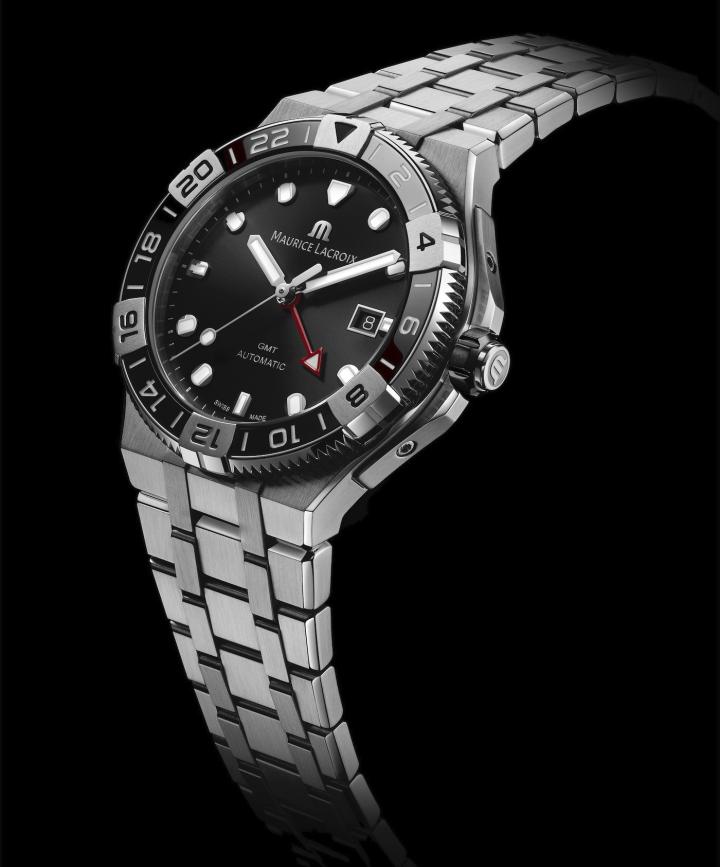 For the first time in its flagship AIKON collection, Maurice Lacroix has included a GMT function.

Intended as the brand’s most urban and “adventurous” series, in 2021 this tool watch welcomes a variation in the form of a dual time zone model with a date at 3 o’clock and an orange GMT hand on a sunray-brushed white dial, or a red GMT hand on a sunray-brushed black dial. This new 43mm offering starts at a little over 2,300 francs. The AIKON collection’s signature six arms punctuate the unidirectional bezel, graduated over 24 hours.

In charge of strategic management for a brand that is back on the growth track we find Stéphane Waser, managing director, and Thiébaut Bentz, product and marketing director. They were kind enough to answer our questions.

Europa Star: How did Maurice Lacroix weather the challenging year of 2020?

Stéphane Waser: First of all, here’s an observation that may surprise you and is very gratifying. Despite the pandemic, we recorded our second consecutive year of profit. It signals the success of a recovery strategy that has been in place for five years and which is largely based on the AIKON collection. This line already accounts for more than 50% of our sales, although it is still in the process of being rolled out. The “AIKON strategy” is working for Maurice Lacroix.

Like the Swiss watch industry as a whole, are you decreasing in volume but increasing in average price?

Stéphane Waser: The quantities have decreased but we have gained market share and increased in value, indeed. Five years ago we launched the AIKON range with a quartz offering, then we switched to automatic and now we are bringing in complications like the GMT function. This enhanced value is showing its effects, along with an increasing average price.

We are operating in a price segment that could be described as “democratic”, a category currently undergoing a reconfiguration. There are fewer and fewer players sharing the space with us. Some brands are disappearing, while others are making the conscious choice to move upmarket. As we have always maintained a strategy based on partnerships with retailers, this leaves the field open to us. Multi-brand retailers are turning to watchmakers that are booming. As a result, we are better and better represented in an increasing number of markets.

“The AIKON strategy is working for Maurice Lacroix. This line already accounts for more than 50% of our sales, and it’s still being rolled out.” 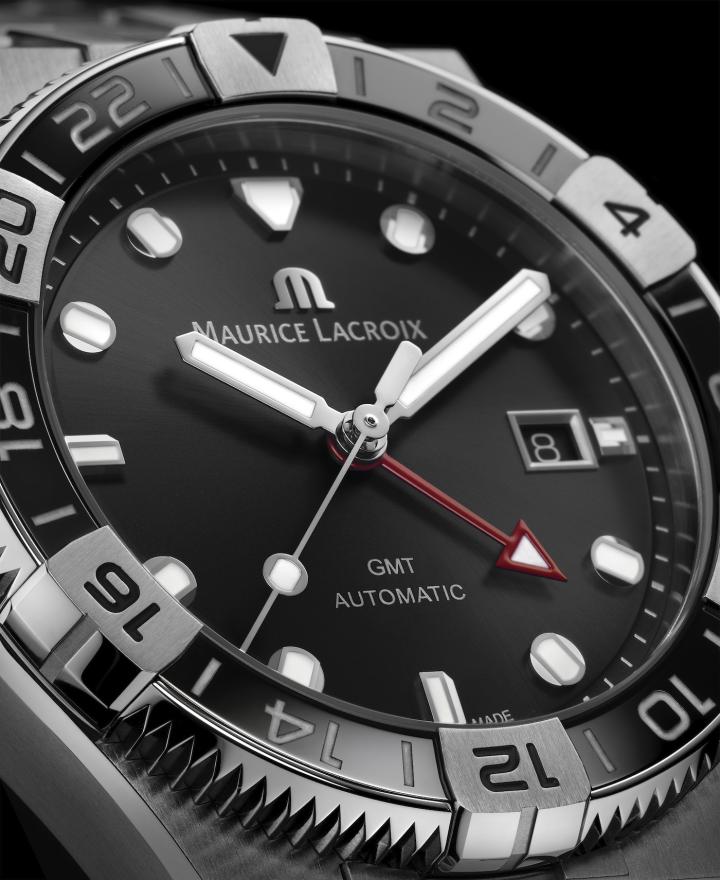 The AIKON Venturer GMT is equipped with a self-winding calibre with date, hours, 24-hour second time zone, minutes and seconds in the centre. To increase contrast and readability, the GMT hand is set in sharp relief on this timepiece, which is water-resistant to 300 metres.

Stéphane Waser: The average price online is also increasing. Until two years ago, the average digital shopping basket was worth less than 1,000 francs. That symbolic threshold has been exceeded. Last December, we calculated that 30% of our sales came from online transactions, whether on our site or on those of our partners. Not to mention, of course, everything that is sold on third-party platforms such as Amazon...

Thiébaut Bentz: It’s in the United States that we find the highest average basket price for online purchases – by a long way. It is a very mature market in terms of e-commerce. We can now see clear, strong potential for developing a physical network for Maurice Lacroix in the USA, to make the most of this digital success.

Even in traditional markets for Maurice Lacroix such as Japan and Russia, we believe we can achieve additional growth. Moreover, unlike many brands over the last decade, we did not rush into China. Nevertheless, we are increasing our sales there every year with a strategy that is more offline than online. DKSH, our parent company, which is very well established in Asia, represents about 70% of our global distribution.

“We have fewer and fewer competitors. With the support of the multi-brand retailers we have continued to support, we have a free hand in what could be described as a ‘democratic’ price category for Swiss watchmaking.”

You have just launched a new variation in the AIKON family with the Venturer GMT. Can you introduce it to us?

Stéphane Waser: The GMT function is a good fit for the urban, active spirit that we wish to infuse into Maurice Lacroix... even though we have certainly travelled less since last year! There was also a logic to this launch in terms of the continuity of the quartz and automatic versions of the AIKON. Within this family, the Venturer models embody the most active facet of the brand.

The model is equipped with a new movement by Sellita. When we discovered it, we were convinced it would be perfect for the AIKON. The challenge lay in playing with contrasts and legibility, light or dark dial versions, and the two-tone distinction between the bezel and the arms. It comes with an Easychange system that allows you to swap between leather strap or steel bracelet with one click.

With this model, we are reaping the fruits of our work with the AIKON line. We have a very accomplished and coherent range. We try to make one major “commercial” launch per year, i.e. a flagship piece that will take a prominent place in our sales and on which we focus our communication. This is the case with the AIKON Venturer GMT.

“Two years ago, the average online shopping basket was less than 1,000 francs. That symbolic threshold has been exceeded. We calculate that 30% of our sales come from online transactions.” 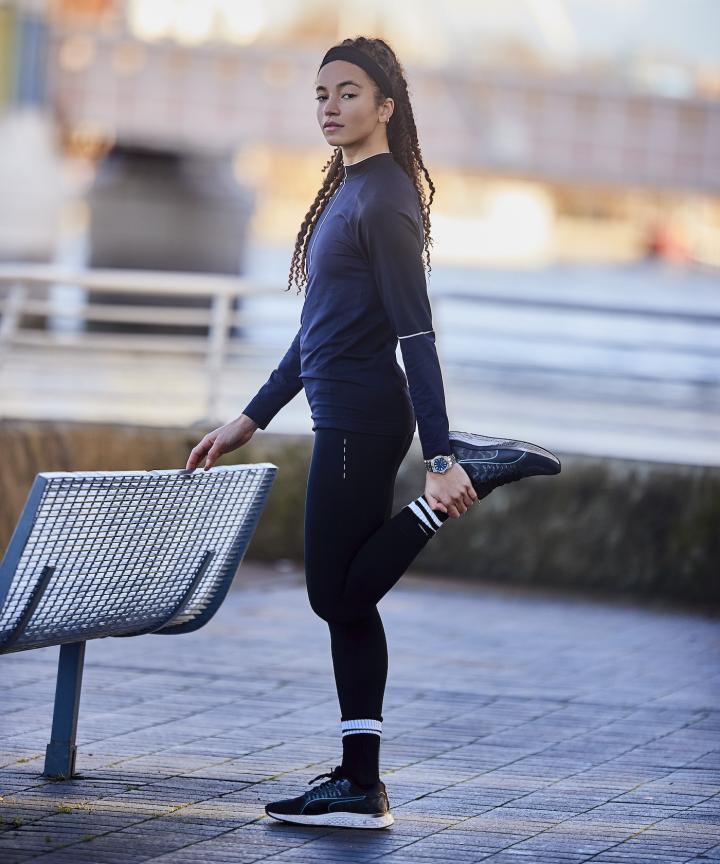 Sprinter Hannah Lucy Williams, the British 200m champion, is part of the ML Crew, a group of talented athletes from around the world supported by Maurice Lacroix.

Aside from that, you have adopted a strategy of occupying the media stage through the release of one new product per month.

Stéphane Waser: Since we left the Basel fair a few years ago, we have relied on a strategy of roadshows. It allows us to space out the launches, rather than presenting everything at once as we did in the past. To occupy the field, indeed. It’s a communication strategy that works extremely well. After the AIKON Venturer GMT, for example, we will celebrate the 25th anniversary of the Eliros before launching a new model with a manufacture movement. Thanks to this strategy, our message is more focused, more precise, and the work on the ground is carried out by our representatives around the world.

Thiébaut Bentz: We have become far more reactive: the piece is presented and launched at the same time in points of sale, simultaneously with a finely calibrated communication campaign. 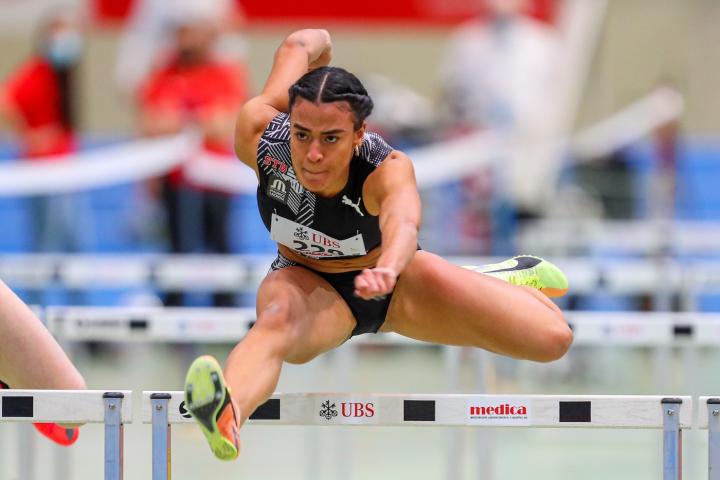 One of the greatest hopes for the 100 metres hurdles, Swiss hurdler Ditaji Kambundji is part of the Maurice Lacroix community of friends.

You have also completely revisited your communication strategy and are now addressing much more targeted communities, from running to beach volleyball [Maurice Lacroix was a sponsor of FC Barcelona between 2014 and 2017]. What is your ultimate objective?

Thiébaut Bentz: Our strategy involves a very strong presence on social networks, and for that we have to constantly feed them with new content. Our “friends of the brand” are very present and available to us. With their support, we always have something original and authentic to say. Almost every launch is associated with our ambassadors. They are not multi-million dollar contracts for a few contractual appearances, which would be counterproductive. New generations are very good at sniffing out the fakes.

“Our strategy is based on a very strong presence on social networks, which we must constantly feed with new content. This requires authenticity: the new generations can immediately spot anything that’s fake.”

Stéphane Waser: For us, what counts first is authenticity. We make sure that our “friends of the brand” have a real attachment to us, and that this is obvious when they communicate about Maurice Lacroix through their own networks. After that, we follow a common thread, that of the urban community of new millennials. We also have a presence on Strava. By the way, running is one of the few sports that you can still do in pandemic times... 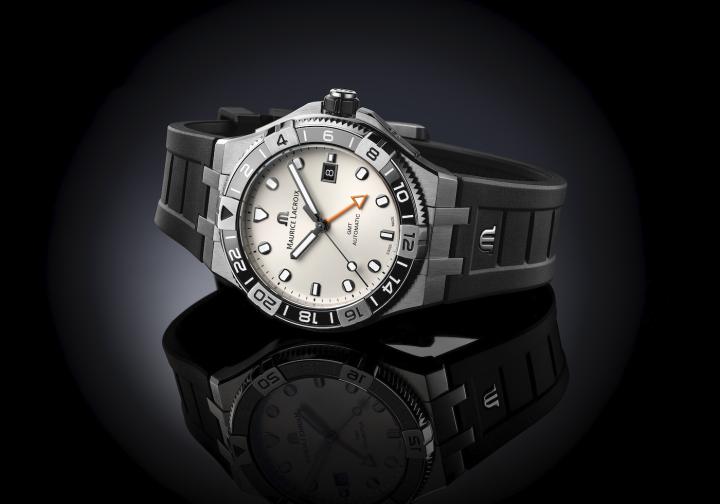 The new model is available with two dials: sunray-brushed black with a red GMT hand with a luminescent tip, or sunray-brushed white with an orange GMT hand.