As startups and established companies rush into e-commerce, Norqain, founded just two years ago, has widened its reach by attracting traditional retailers. Today, the brand is widely distributed in Japan, has won over Tourneau in the United States, and has just signed a partnership agreement with Kenissi, the discreet manufacture operated by Tudor and Chanel.

As startups and established companies rush into e-commerce, Norqain, founded just two years ago, has widened its reach by attracting traditional retailers. Today, the brand is widely distributed in Japan, has won over Tourneau in the United States, and has just signed a partnership agreement with Kenissi, the discreet manufacture operated by Tudor and Chanel.
N

orqain: this somewhat strange name has gradually appeared on our radar over the last two years, to the point that it now presents a credible alternative in the highly competitive niche of the 2,000 franc mechanical Swiss watch, dominated by the Swatch Group and a few heavyweights such as TAG Heuer and Frédérique Constant. The announcement of a partnership with the highly secretive Kenissi manufacture to supply its movements convinced us that we should take a closer look at this newcomer.

High-profile names will certainly have helped to open doors that usually remain closed in these rather chilly times..

Founded in 2018, the startup was born from the association between entrepreneur Ben Küffer and some prestigious shareholders including ice hockey star Mark Streit as well as Ted Schneider, son of the former owner of Breitling. Marc Küffer, the father of the founder and former director of the private label specialist Roventa-Henex, is chairman of the board of directors. High-profile allies such as these will certainly have helped to open doors that usually remain closed, in what has been a rather chilly period for the Swiss watch industry (and downright icy since January). This is particularly the case for retailers, who tend to be unwilling to take risks. 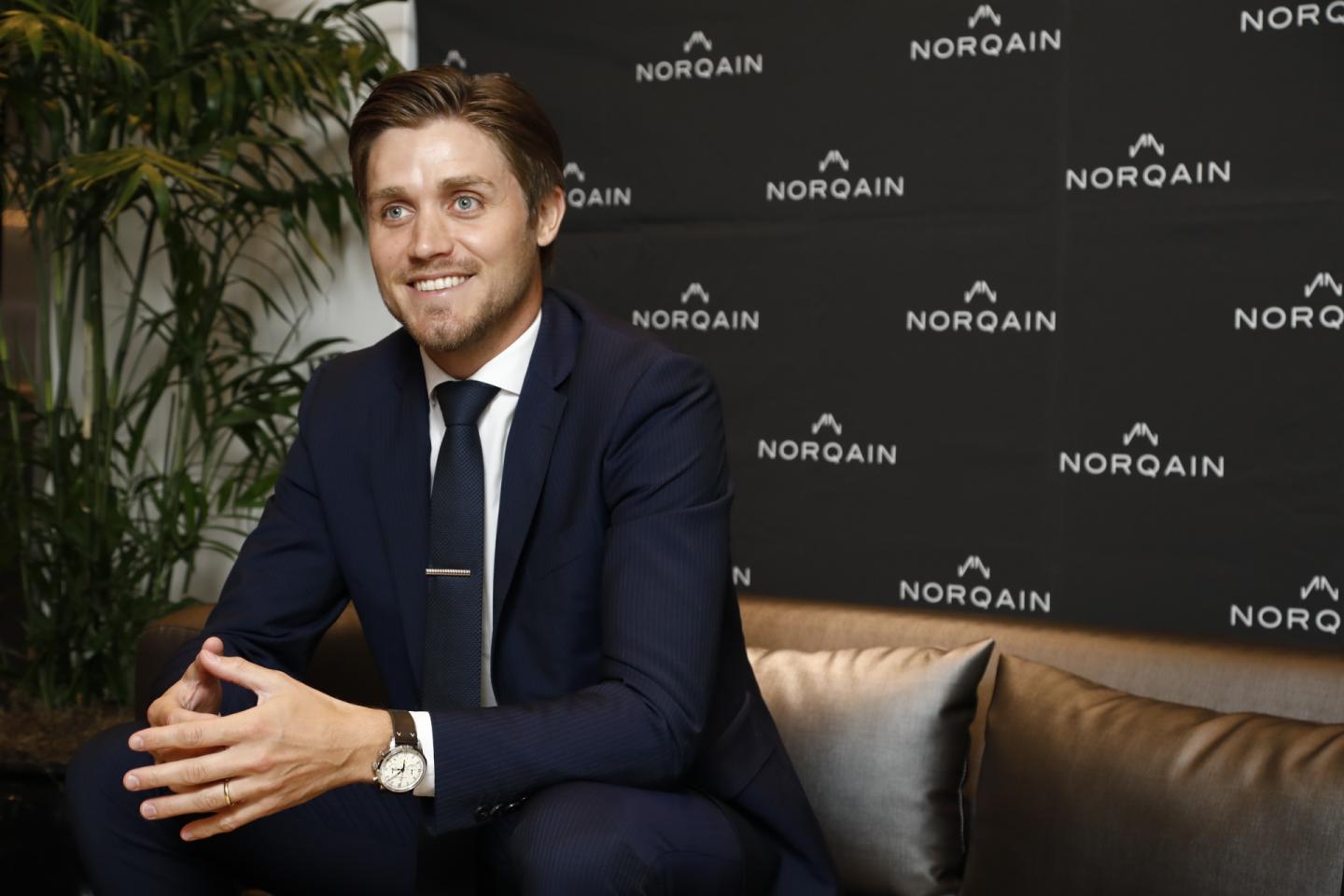 “In the beginning, we thought about simply buying out a dormant brand name and relaunching it, as many people have done in recent years,” says Ben Küffer. “It might have seemed easier. But in the end we decided to go with our own story, that of passionate independents in a business environment that is increasingly controlled by big groups.”

This self-financed company actually wanted to take the market by storm. Watchmaking history is made up of perpetual cycles and counter-cycles, but at a time when most startups (and many established brands) seemed to be deserting traditional distribution to embrace e-commerce and crowdfunding, Norqain knocked on retailers’ doors with competitively priced mechanical models. And this is where the profile of the founders certainly helped. 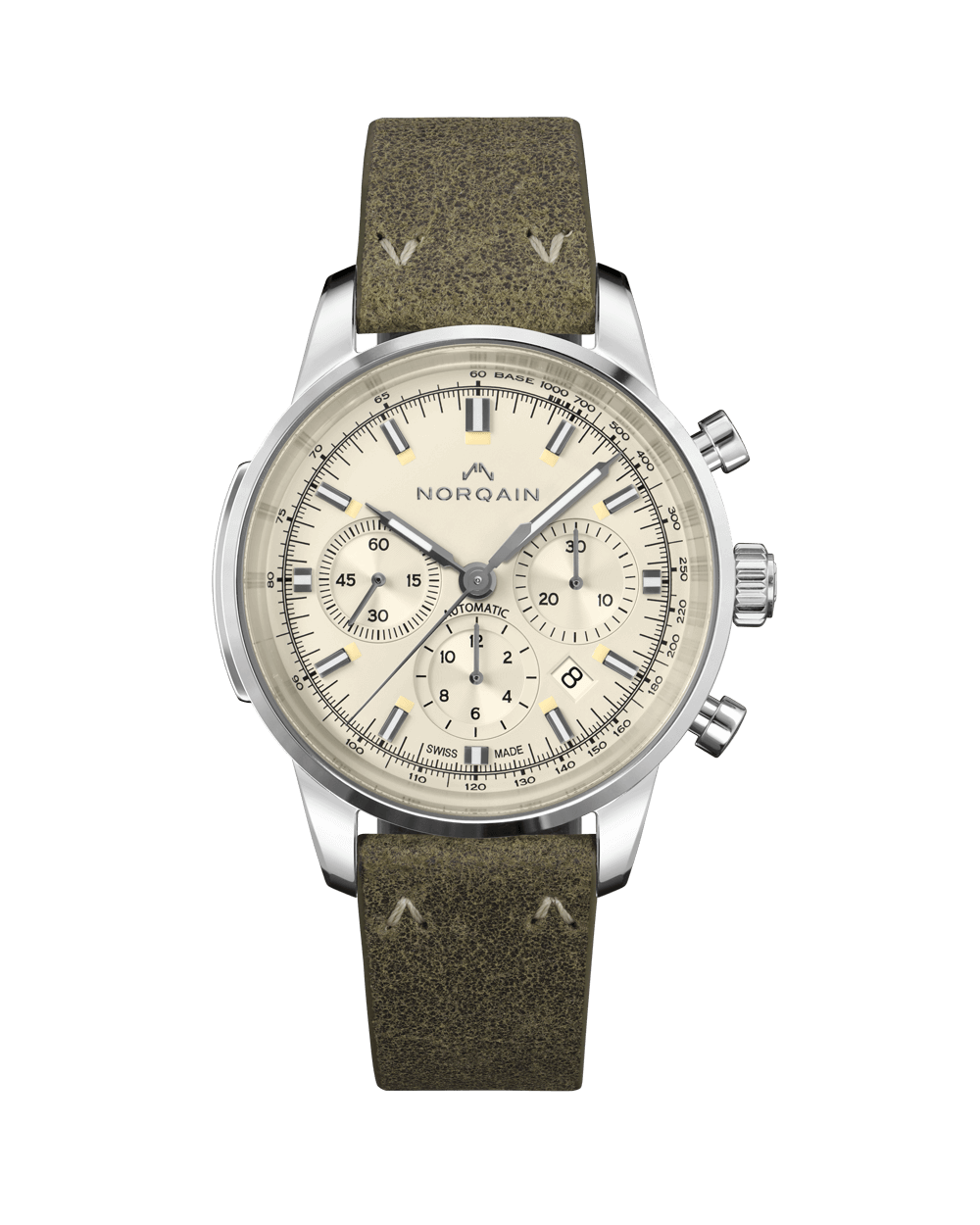 “In our segment, retail prices had risen considerably,” Küffer says. “We came up with an alternative.” An alternative that was particularly successful in two markets: Japan and the USA. The brand has also launched an e-commerce platform in North America, but online sales account for only a small proportion of total revenues.

In Japan, a particularly discerning market, the argument of the independent Swiss mechanical brand seems to have resonated. In the first year of operation, the local distributor was able to open 35 sales outlets for Norqain. In the United States, the reputation of Mark Streit – a shareholder now joined by another ice hockey star, Roman Josi – helped to raise the profile of the brand’s sports offering. Several additional points of sale are being planned through the partnership with leading American retailer Tourneau (controlled by Bucherer). 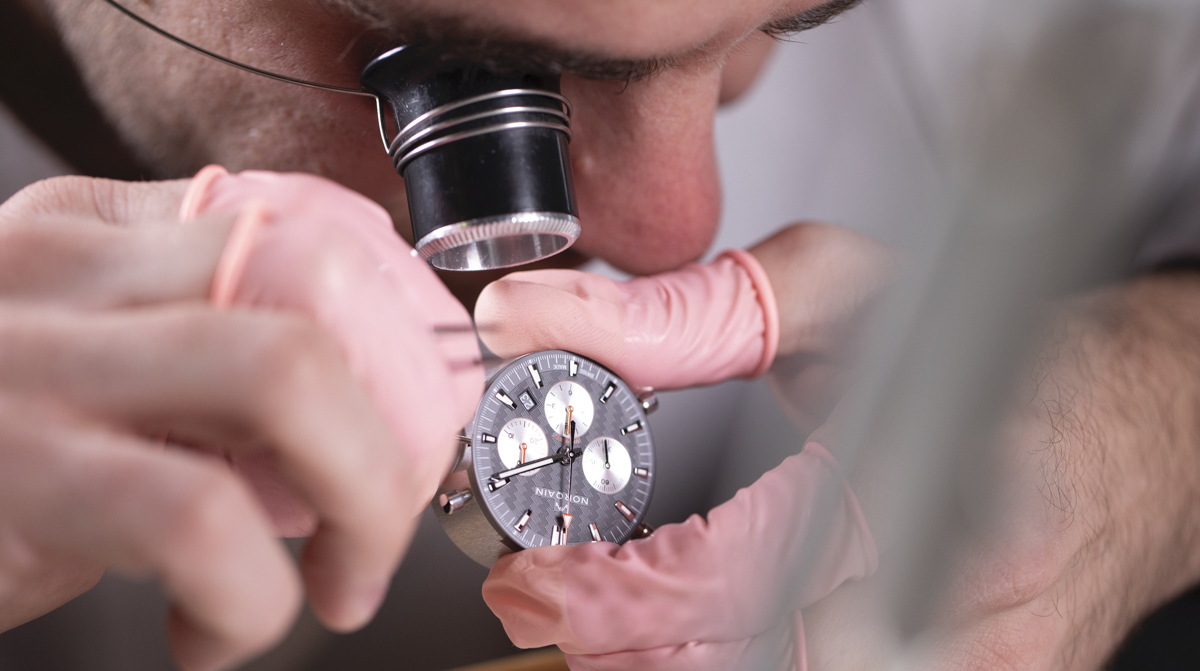 A powerful alliance with Kenissi

Norqain now employs about fifteen employees in Tavannes and Nidau. The brand, which is represented in some 70 points of sale around the world, produced more than 4,000 watches in its first year of existence and is aiming for a plateau of 10,000 units in the long term. “We want to remain a sell-out brand and not get caught in the sell-in trap,” emphasises Ben Küffer.

“We wish to remain a sell-out brand and not get caught in the sell-in trap.”

Another special feature is the sense of detail that the brand wanted to provide by offering easy access to engraving. This option has proved popular in the United States, where a majority of Norqain watches are engraved – while only a small proportion of models sold in Switzerland or Japan are customised in this way. 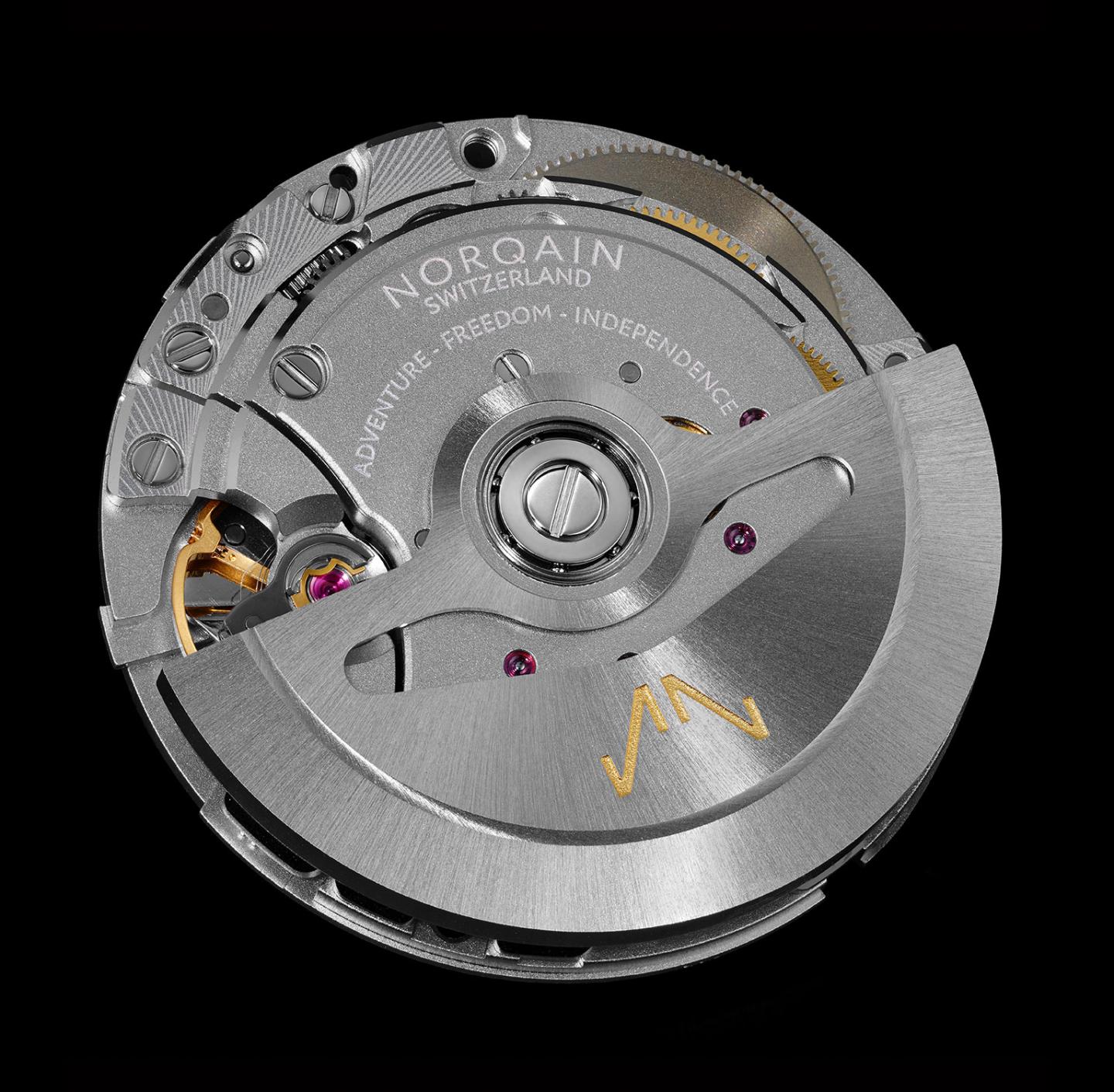 Delivered by Kenissi, the three-hand calibre NN20/1 and the GMT calibre NN20/2, both with a 70-hour power reserve, will equip Norqain’s existing collections from next summer.

The latest development is the collaboration with the Kenissi manufacture, which will supply Norqain with certified chronometer movements: the three-hand calibre NN20/1 and the GMT calibre NN20/2, both with a power reserve of 70 hours. Ben Küffer cannot tell us much about this very discreet entity, which does not communicate with the press (for the time being at least).

It is fair to assume that the manufacture was “seduced by Norqain’s design and profile.” Ben Küffer explains: “For us, it is essential to build a long-term strategy that is not based on dependence on a single movement supplier, given the risks of late delivery. And integrating Kenissi calibres allows us to differentiate ourselves even further.” 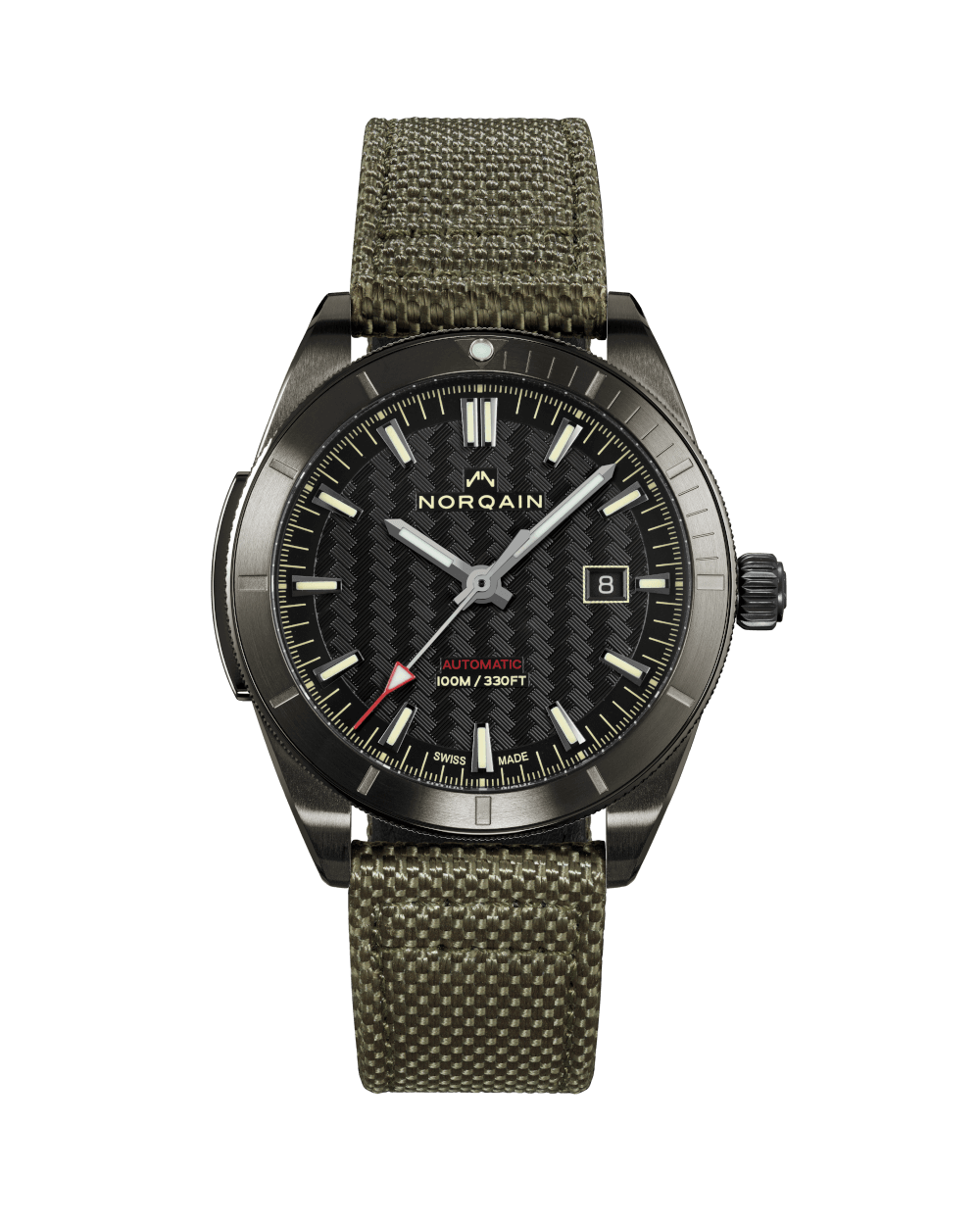 The three collections proposed by Norqain – Freedom, Adventure and Independence – will include some models equipped with Kenissi movements from next summer. Models priced below 2,000 Swiss francs will continue to feature Sellita calibres. The average price at Norqain is 2,800 francs. “There is still a huge amount of work to be done to convince people to wear a mechanical watch. On our scale and with our arguments, we believe we can play a role in this industry-wide goal.”

Creator of concept cars in a major automobile group for the past twenty years, Olivier Gamiette is also passionate about designing watches in his spare (...)