After 156 years of being a Swiss company, Eterna has passed into Chinese hands. Symbolically, this is quite significant not only because Eterna is a true manufacture that produces its own calibres and movements, but also because it has a rich historic heritage and thus has a legitimacy that is far from negligible. Eterna was established in the town of Grenchen, near Bienne, the fief of the giant ETA, and is thus a part of watchmaking history. [As a reminder, ETA, which now belongs to the Swatch Group, was created after the fusion of a group of Swiss ébauche manufacturers (ASUAG), that Eterna joined in 1932, the year its ébauche division was renamed ETA. ETA was historically the name engraved on the Eterna movements destined for third parties.] Yet, even with its 25,000 watches sold per year, including Porsche Design watches of which 20 per cent are equipped with in-house movements and are produced by around 75 people, the brand is not as powerful as it was during its golden age. With the acquisition of Eterna and Porsche Design, sold by the Porsche family for a price that seems relatively modest (officially HK$214 million or CHF 25 million), China Haidian Holdings seems ready and willing to push its pieces right into the heart of the Swiss watchmaking industry.

What, then, is China Haidian?Listed on the Hong Kong stock exchange since 1991, China Haidian is a group that, along with the brands Ebohr and Rossini, claims to have 43 per cent of China’s domestic watch market. Acquired in 2003, Ebhor—located in Shenzhen —produces approximately 800,000 watches per year, which are equipped with Japanese and Swiss movements. Rossini, acquired in 2008, sells 1 million timepieces per year. Actively working in cases and assembly, China Haidian has developed a very large distribution network in mainland China since 2009, through four distinct labels totalling 2500 points of sale. This network consists essentially of the mid-range with, besides its own brands, a number of Swiss brands such as Longines, Titoni, Baume & Mercier and Tissot. In Switzerland, China Haidian recently created and launched a Swiss Made brand, Codex, located in Bienne. Its beginnings, under the leadership of René Kohli—who has since resigned—were flamboyant but then chaotic, to the extent that, once again, doubts were expressed about the “cultural compatibility” between Swiss watchmakers and Chinese investors. (We might recall notably the examples of Universal, whose relaunch has been waiting for years, and Milus where Jan Edöcs and his team, even though very deserving, had to recently abandon the project.)

Will the brand work this time?To learn more, Europa Star met with Patrick Kury, the “CEO ad interim” as is written on his business card. Born in 1971, this young economics and management graduate, with a Swiss federal certificate in watchmaking, worked for the Swatch Group before passing to Eterna in 2005 where he was responsible for technical development and served as deputy executive director.

Europa Star: What was the main reason that China Haidian purchased Eterna?

Patrick Kury: It was primarily because of its history and its technical competencies. In the current circumstances and the uncertainties that still reign in the domain of movements, industrial capacity and the technical know-how are of the utmost importance. Right from the beginning, China Haidian clearly made known its ambitions for wanting to produce its own mechanical movements, and a plan for industrial investment was established with a view to strengthening our teams in this strategic domain. Moreover, the acquisition of Eterna and Porsche Design are part of a broader strategy of investments in Switzerland and Europe. I would like to immediately stress, however, that on an operational level, China Haidian gives us complete freedom. While its management supports us financially and opens the Chinese market to us, it does not directly intervene in our daily affairs. It respects as much our tradition and methods of working as it does our network of suppliers, which remains totally unchanged.

ES: Furthermore, for Eterna, this acquisition opens the doors to the gigantic Chinese market where you were not present before…

PK: Yes, that’s true. Confronted with problems in its distribution over the last decade, Eterna had a problem with its network, with the markets that were traditionally strong such as northern Europe, but as well large virgin territories like China. China Haidian opens the doors wide for us on this market, a market for which our offer seems quite well adapted, as much because of the medium size of our watches as for their style, a style that is classic, very watchmaking, which corresponds to the expectations of the Chinese consumer. The price has also been well calculated, with mechanical ETA movements starting at CHF 2,200, and going up to CHF 3,900 for a chronograph, while for a collection equip-ped with 100 per cent in-house movements, the price starts at CHF 5,600. For Porsche, the situation is a little bit different. It is a name that is prestigious and thus very attractive for the Chinese market.

ES: But hasn’t Eterna also had a problem over the last few years with its products, with a lack of visibility and recognition?

PK: Yes, it has. With a large expenditure in terms of energy, we have succeeded in achieving major advances in terms of the design, development, and production of movements with very interesting mechanical propositions. I am thinking notably of the planned and progressive development of the Calibre 38 family with its Spherodrive system. Yet, undoubtedly we have not been as successful in terms of finished products. We are thus at present engaged in a vast effort of revisiting and enlarging our collection. We are gradually going to have a new and extended offer comprised of products in all price ranges, whether equipped with in-house movements, third-party movements, or quartz movements.

PK: I might remind you in passing that quartz has always been an intrinsic part of the history of Eterna, which, along with ETA, developed an analogue quartz movement. In 1980, the brand introduced the Museum watch, a world record at 0.98 mm in thickness, including the case. In the 1980s and 1990s, Eterna enjoyed considerable success with its quartz offer. We are thus not going against our history but with it, with our entire history. In parallel to the development of small complications and useful mechanical complications, we are going to offer new quartz models, watches that are high quality, but with a very affordable price, in a wide range of models for both men and women. We want to re-conquer the entire mid-range.

ES: How will this new offer be structured?

PK: The various levels of the offer can perfectly co-exist within the same collection. We can also have a quartz product, a standard mechanical watch, and a timepiece with an in-house movement all together in the same collection. In the latter case, it will be distinguished by a display or by a small additional complication, such as a power reserve indicator, large date, or something else. One example is the Madison 8 Days model.

ES: And for Porsche Design?

PK: The strategy is the same. For example, you will find the highly technical model of the Porsche Design P’6910 Indicator equipped with our Eterna Calibre 6036 automatic movement that, with its 800 component parts, is the most complicated movement in the world to be manufactured in series. And, this is a watch that sells for CHF 110,000. But, in the same collection, you will also find an Indicator timepiece, featuring less functions and driven by a Valjoux movement, that sells for CHF 9,000. 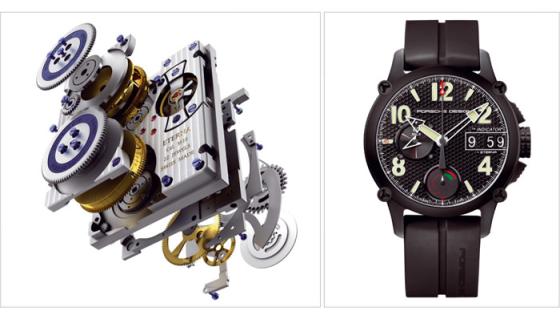 ES: And an issue that risks to become volatile in the near future—is Eterna ready to deliver mechanical movements to third parties?

PK: We do not exclude anything, but for the moment, our priorities are elsewhere. We want to strengthen the brand and construct a veritable brand strategy. With the opening of the Chinese market, then Asia, we expect a great increase in growth and we therefore must attend to our own needs first. We will see later what happens, how the situation evolves.

ES: You yourself have been named officially as “CEO ad interim.” This interim, will it last?

PK (smiling): We agreed upon a period of transition and evaluation. Today, six months after the acquisition, there is still a lot to discuss. Let’s leave it at that…

For more information, visit the Eterna website, which was relaunched to coincide with the start of BaselWorld 2012.