WorldWatchReport: Seven years of analyzing the watch industry and its presence on the Internet


On the occasion of the release of the seventh edition of the WorldWatchReport, we return to this study of the market that casts a unique light on the watch industry.

WorldWatchReport: Seven years of analyzing the watch industry and its presence on the Internet

On the occasion of the release of the seventh edition of the WorldWatchReport, we return to this study of the market that casts a unique light on the watch industry.

Since 2004, the WorldWatchReport has deciphered the main trends in the watch industry by analyzing hundreds of millions of key words used by web surfers who are looking for watch products online.
Published in collaboration with Europa Star, the study has, over the years, become an important and reliable source of information for the various industry players to compare the performance of the main watch brands on the international scene. Centred on the analysis of the behaviour of consumers, the WorldWatchReport sheds new light on an industry that, in addition to the statistics provided by the Federation of the Swiss Watch industry (FH), has no real reference indicators.

The interest provoked by the WorldWatchReport shows the importance of the societal role played by the Internet around the world. The main entrance points to this vast network of information are the search engines, which collect and aggregate the interests and intentions of watch clientele. The representativeness of these searches and the validity of their utilization for market studies can today no longer be in doubt. The statistics of the WorldWatchReport compared to the reality of sales numbers from several watch brands has allowed us to confirm the relevance of this approach.

The WorldWatchReport covers the principal watch export markets and 25 brands. Based on the analysis and classification of hundreds of millions of searches recorded spontaneously from the main search engines, the study provides indicators such as the popularity of the brands, their models, and their ambassadors, as well as a distribution of the demand for various types of searches (for example, price, distribution, used watches, etc.).
Over the years, the WorldWatchReport has shed light on the principal phenomena and trends that have marked the watch industry on the Internet, as follows.

1) The explosion of the demand for watch products
Starting in 2005, the demand indicated by the number of online searches for watch products has shown exponential growth, confirming the democratization of the Internet and its importance in the act of purchasing a watch. Rolex, Omega , TAG Heuer, Cartier and Breitling rapidly became the most popular brands on an international level, capturing up to 90 per cent of searches. Their hegemony has never declined over the years.
These brands also compete for the most popular models, of which they are regularly in the top positions. After several years of domination by Rolex’s Daytona model, Omega now occupies the first place with its Seamaster watch. It is interesting to note that the demand for these iconic and timeless timepieces has remained relatively constant over the years.

2) The counterfeiting phenomenon
The most popular brands are also those that generate the highest demand for fake models. Nearly 80 per cent of the searches looking for replica pieces are in regard to Rolex. Until 2008, the searches for counterfeit watches represented a relatively large part of the total demand. This has declined, little by little, and today represents only about 5 per cent of searches on an international level. Over time, the WorldWatchReport has confirmed a strong trend tied to the phenomenon of fake timepieces—the demand for copies decreases on a market when the rate of penetration of the Internet increases. The economic crisis of the years 2009 and 2010, however, saw an increase in searches for counterfeit pieces in the United States and Europe.

3) The emergence of China
The development of the markets in the BRIC countries, notably China, has been very strong at the start of the second decade of the 21st century. In 2005, the United States captured nearly three-quarters of the online searches for watch products. Even though this market continues to generate the largest demand, the USA now represents no more than 32 per cent of global demand in 2011, before China at 20 per cent, Britain at 11 per cent, and Germany at 9 per cent.
The BRIC countries are in full expansion and today represent 29 per cent of all online searches for watch products. They should soon surpass the European countries covered by the study, which account for 34 per cent, since they are seeing a stagnation, even a decline, in the volume of online searches for watches.
An international study, the WorldWatchReport permits the identification of trends by market and the comparison of search intentions. For example, Chinese web surfers are mostly interested in brand names (which garner two-thirds of searches).This study also shows that they have a lesser knowledge of the names of particular models than the European and American clientele. Also, the classification of the most popular brands differs. The Americans prefer Rolex and Breitling, while the Chinese express their preference for Omega and Longines.

4) The development of social networks
Since 2009, the WorldWatchReport has also measured the performance of watch brands on social networks. With audiences that count in the millions, the social networks are, similar to search engines, an inescapable point of contact between the brands and their clients.
With the notable exceptions of Patek Philippe and Rolex, all of the major watch brands have an official presence on the social network Facebook. Some of them are also present on Twitter and youTube, where they distribute content and interact with their clientele. The number of fans—in other words, those people who express their attachment for a brand by being a member of a social network—is the indicator used to measure the popularity of a brand on Facebook. With more than 160,000 fans each, Bulgari, Hublot and TAG Heuer are the most popular.
Since 2011, the WorldWatchReport has used a qualitative indicator to measure the performance of watch brands within social networks. This is the rate of engagement, meaning the average volume of interactions of the messages published by the brand that has resulted in new fans. On the basis of this indicator, the winning trio: Zenith, Chopard and Omega .

In the years to come, the development of smartphones, tablets and even technologies like increased reality will certainly impact the behaviour of watch consumers. These new usages will undoubtedly require the development of new indicators to understand consumption habits and to measure the performance of the brands. This is a challenge that the WorldWatchReport is ready to tackle in the years to come. 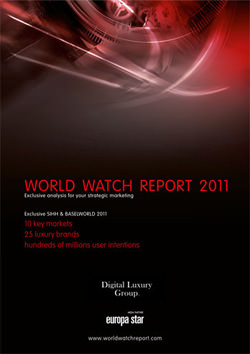