WORLDWATCHWEB™ - Watch forums MOST INFLUENTIAL PLATFORMS amongst collectors and aficionados


WORLDWATCHWEB™ - Watch forums MOST INFLUENTIAL PLATFORMS amongst collectors and aficionados

Watch forums are one of the oldest, most established forms of social media on the Internet and have earned their place in the promotion of luxury watch brands, principally in the Haute Horlogerie and Prestige categories amongst collectors and watch aficionados. For the first time since launching nine years ago, the WorldWatchReport™ introduced a new metric measuring the importance and reach of these forums. Since they are often overshadowed by hipper, newer platforms such as Facebook and Twitter, watch brands should pay closer attention to these forums, if they aren’t already. According to the WorldWatchReport™, they are the most influential platform amongst collectors and aficionados, representing an excellent way of communicating directly with the industry’s most dedicated followers and have the highest affinity with watch brands’ official websites. Furthermore, the role of forums is especially important during the purchasing process of a typical client. It is a key behavioural driver.

Among the top three watch forums analyzed, Chinese platform iWatch365 captures the lion’s share with 49 per cent of the 95 million total forum posts views, closely followed by pioneer TimeZone (45 per cent) and PuristSPro (6 per cent).

TimeZone.com’s Managing Director and moderator of the Patek Philippe forum, William Rohr (also WorldWatchReport™ contributor and new DLG Partner) comments, “TimeZone appeared in 1995, Watchnet in 1997, PuristSPro in 2001. Yet brands avoided this medium for a very long time and embraced it only in the last five years as a marketing tool. This 10 year lapse needs to be caught up really fast as this is the only platform where there can be potential direct interaction between the brand and the client prior to the purchase and post acquisition of a timepiece. Forums remain the most important platform of communication amongst watch collectors.” 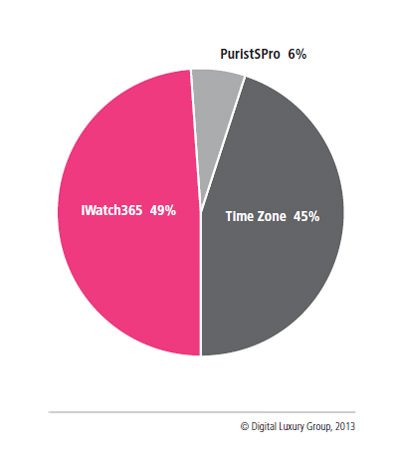 Pascal Ravessoud, Development Director at Fondation de la Haute Horlogerie and WorldWatchReport™ contributor, concurs, stating that, “The importance of watch forums is increasing. In a connected world where Internet users are more and more interested in the users’ experience and interactions, it is quite important for brands to be connected with their final clients, understand their needs, react to their queries and help moderators ‘sell’ the brand. It is today a much more interesting and personalized platform than the Facebook experience.”

Patek Philippe, Jaeger-LeCoultre and A. Lange & Söhne currently lead forum discussions and views. Conversely, brands such as Vacheron Constantin, Ulysse Nardin and Breguet are less engaged. As explained by William Rohr, “The Patek Philippe, Jaeger-LeCoultre and A. Lange & Söhne forums are some of the oldest brand-specific forums on TimeZone, combine this with a strong personality moderator and you create a following. Ulysse Nardin and Breguet are relatively new on forums, Breguet is not involved and it affects the brand’s perception on these platforms.” Pascal Ravessoud goes further to state, “Brand aficionados spread the word and raise interest creating a buzz. I think the Patek fan community is the most vibrant because the brand overall has developed a cult following in recent years. Jaeger-LeCoultre has a whole community of fans and collectors who are very keen on talking about their products, same for A. Lange & Söhne.” 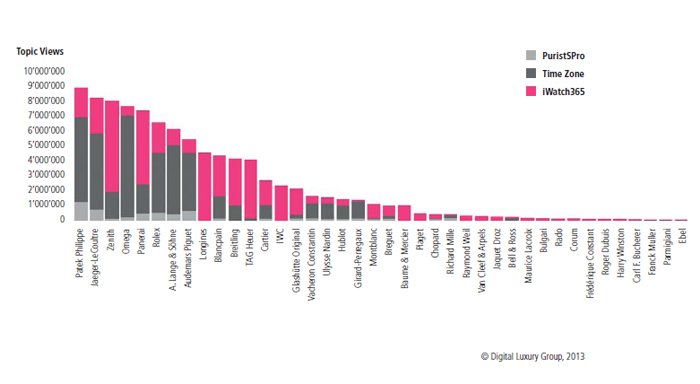 BREAKDOWN OF THE MOST POPULAR BRANDS ON WATCH FORUMS 2012

In China, BBS (online discussion forums) are extremely well developed and endowed with a greater influence than in western markets. The forums are animated by experts or aficionados who impart knowledge, serving to amplify word-of-mouth in a neutral and spontaneous way. In the watch sector, iWatch365 is by far the leader with the widest reach and popularity. Thousands of its users exchange messages every day under different watch-related subjects, to compensate for the lack of local information available from the brands’ corporate sites. Upon comparison of the brand rankings of total views on iWatch365 and the ranking of total search volume, Rolex, Omega, Zenith and IWC are strongest performers on BBS. “The reason Zenith is popular amongst watch enthusiasts (those who are usually more active on watch BBS rather than on Sina Weibo), is because these people are fond of in-house produced movements. The Rolex Daytona is said to use Zenith movements, so those who adore Rolex come to love Zenith too. As for IWC, it branded its overall style as ‘Timepieces for Men’ during the last two years and declared last year’s theme as another year of ‘Pilot’s Watches’- boosting its popularity,” concludes Air Time China Editor-in-chief and WorldWatchReport™ contributor Henri Liu.