At the end of the day, eight if you had the stamina, the question that begs an answer is: was the prestigious BaselWorld 2013 more about architectural kudos or its horological content?

This year I attended BaselWorld in awe of both the organization’s titanic 430 million Swiss franc transformation of the site’s old buildings and the monumental multi-million dollar creations of the exhibitors. My days there were as memorable as my first neck-craning visit to the skyscrapered skyline of New York and I spent my time meandering through the vast halls much like a youngster on a mouth-watering visit to a chocolate factory.

Nevertheless, I can’t help feeling that in spite of the magnificence of the manifestation, the massive amount of ego-massaging, one-upmanship and even pretentiousness behind the resulting stand designs almost detracted from the event’s raison d’être, i.e. to sell watches. Of course it is essential to maintain the name of a brand before the public to remind potential buyers of its existence, but we’re talking hundreds of millions here not small change from the grocer’s shop. As much as I admired the Rolex edifice (booth somehow seems too inadequate a term), I can’t help questioning the extravagance of purchasing, designing and maintaining around 2,500 square metres of space for an eight-day gig at a cost of well over thirty million Swiss francs when their clients, all established retailers, are effectively a captive audience.

Rolex was not alone, there were numerous other big spenders: the beautifully designed and constructed wood-dominated pavilion of Hermès cost many millions and clearly Festina, Swarovski, Corum, Jacob & Co., TAG Heuer, Bulgari, De Grisogono, and the collective forces of the Swatch Group to name but a few, also dug deep into their coffers to participate in this year’s “Show of Shows”.

According to the BaselWorld Fact Sheet, there were one thousand new stands this year, many of which housed the major players – and those that would like to be – in the watch industry and were to be found on the three floors of Hall 1. The smaller independent brands were to be found in the tented Palace across the road or across the passage to Hall 2 on the second and ground floors – with one glaringly obvious lapse in geopolitical management: the highly successful Belgian company, Ice-Watch. Their stand was to be found in Hall 2.0 at the furthest point possible from Hall 1 – and one Group in particular – and was so distant from the main thoroughfare that I half expected to see St Bernard dogs trotting about bearing barrels of vintage brandy around their necks, or at least someone fumbling with their emergency rations whilst the homing device of their Breitling Emergency II transmitted their exact position to search parties. As it was Ice-Watch had anticipated the problem and sent out a rather attractive bounty hunter to assist frustrated potential buyers in their quest. (See Lakin at Large in this issue for more on Ice-Watch.)

BaselWorld is normally an horological feast, but this year with its additional decorative splendour it became a banquet fit for kings. What follows is therefore nothing more than a snack, a tantalising taste of what and who was there to be seen. Bon appétit!

Tucked away on the ground floor of Hall 2, a classical no-fuss stand with normal display windows heralded a ‘World Première’: a smart watch created in a joint venture between Aerowatch and Toshiba.

Aerowatch is an independent Swiss watch company that was founded in 1910 specialising in the production of pocket watches and pendants. In 2004, by then headed up by Denis Bolzli and his two sons, the brand moved into the wristwatch arena using hand-wound or self-winding movements. Today, after a ten-month collaboration with Toshiba, the world’s largest electronics and IT corporation, the brand is introducing its first “intelligent” watch combining Swiss watchmaking tradition with the very best of Japanese technological innovation.This unification of traditional watchmaking skills and cutting-edge technology marks not only a transition in the history of both companies, but also has placed Aerowatch at the forefront of a potential market that aims to meet the demands of a more technically savvy clientele. 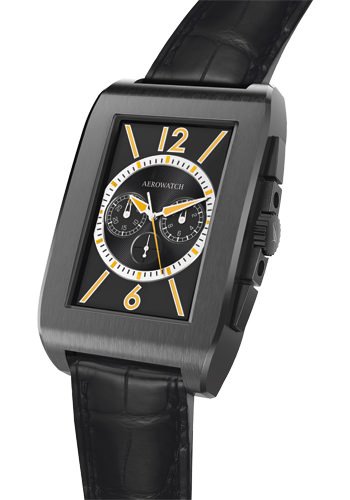 The Generation 3 smart watch cleverly combines Aerowatch’s horological know-how with the typical Toshiba smartphone applications and software that the corporation’s engineers have developed specially for this timepiece. The result is a handsome watch that offers infinite variations in dial design and hands which the wearer can reconfigure and personalise to suit their personal preferences simply by pressing the dial: ten different options ranging from a chronograph to a compass, a day/date/moonphase combination to Google maps and e-mail to messaging.The watch functions with a rechargeable battery and as Denis Bolzli proudly claims, “What a smartphone can do, Aerowatch’s Generation 3 watch can do.” It’s an exciting and innovative product designed to capture the imagination of hi-tech aficionados and computer mavens, but is this the future of timekeeping? Next