GENEVA WEEK / OUTSIDE THE SIHH - Flotilla in Geneva Harbour


GENEVA WEEK / OUTSIDE THE SIHH - Flotilla in Geneva Harbour

The SIHH, which this year celebrated its twentieth anniversary, is a victim of its own success, attracting an increasing fleet of hangers-on around the flagship event.

The flotilla includes large cargo vessels (Hublot, Zenith), frigates such as Ulysse Nardin, pleasure cruisers (de Bethune, Christophe Claret, Urwerk, FP Journe, MB&F, Bovet, Manufacture Royale) and ocean-going monohulls such as Revelation and Ollivier Savéo, to name just a few. They all mill around the bay, not far from the Cité du Temps, an artificial island inhabited by the Swatch Group, which is exhibiting Breguet and Harry Winston there. A short distance away, on the Rue du Rhône, all the watchmaking boutiques, single- and multi-brand alike, are staging their own ‘exhibitions’. And we shouldn’t leave out the Franck Muller group, which is entertaining in high style at its country seat, and Cvstos, which is partying like there’s no tomorrow in its arcade, with the help of the larger-than-life Gérard Depardieu.

Fabienne Lupo, the welcoming and considerate director of the SIHH and FHH, is resigned to the phenomenon. She nonetheless draws a distinction between the independents who, understandably, are trying to make the most of the opportunity, and the powerful groups that turn up on the doorstep, uninvited. Some years back she toyed with the idea of organising a parallel exhibition for Haute Horlogerie independents in a chateau close by the SIHH. But the brands exhibiting at the SIHH opposed the idea, and it was dropped. Which is a shame. Evidently, even elephants are afraid of mosquito bites.

Whatever the case, it was possible to find some extremely attractive deals during this hectic week. Here, as a kind of appetiser, are some from the independents (in alphabetical order, so as not to ruffle any feathers), but we will cover them at greater length in our next issue (ES 2/15) which will be published to coincide with Baselworld. Most, if not all, will also be present at the Basel fair. 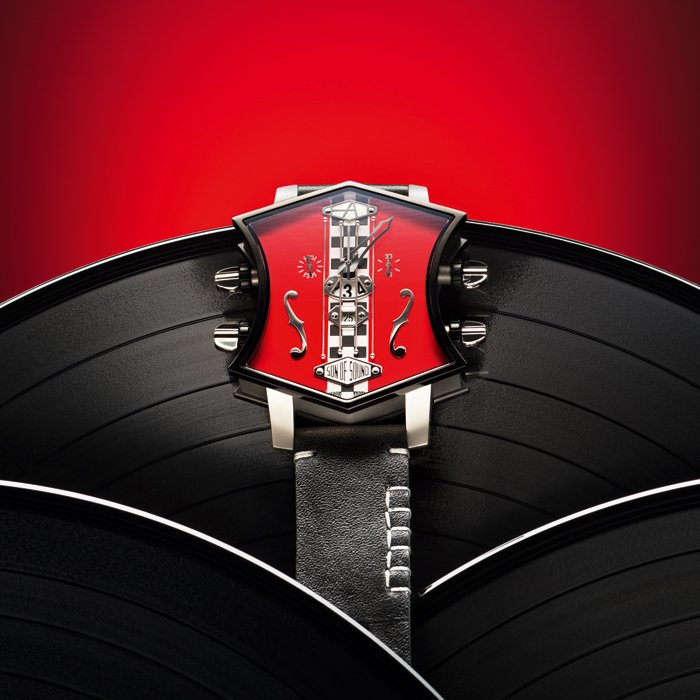 Son of Sound by ArtyA

Launched in 2010 by Yvan Arpa, the brand is expanding its ‘Son of’ range with ...a Gun, Sound, Gears, Earth and Art. You may remember its models, whose blued cases were produced by real lightning from an electrical coil. The watchmaking entrepreneur is presenting some new variations on his Son of Sound, drawing inspiration from musical motifs and stringed instruments. This iconic piece will soon be on display at the MoMA in New York. Available in some 60 sales outlets, the brand also offers one-of-a-kind and bespoke pieces. (SM) 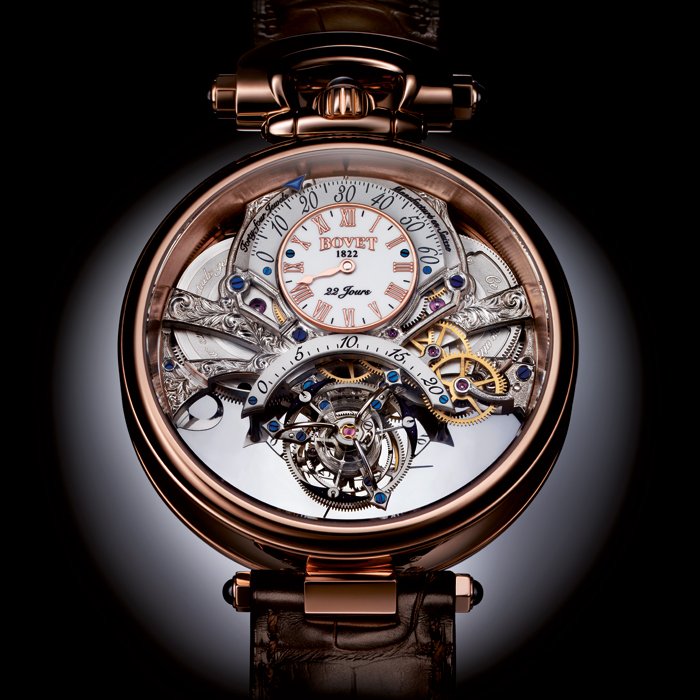 The Val de Travers brand presents several richly worked and elegant pieces. For ladies there is the Miss Audrey, whose Amadeo system allows the watch to be easily detached from its bracelet and converted into a pendant, pocket watch or table clock. Another model to watch is the jumping hours Virtuoso with five-day power reserve, optionally set with gems, in rose or white gold. The Braveheart transparent tourbillon with retrograde minute hand is also worth a look! The brand is equally active in bespoke watches; around 30% of its sales are for custom models. Bovet is also continuing its push for vertical integration, with 75% of base movements produced in-house in 2014, compared with 50% the previous year. (SM) 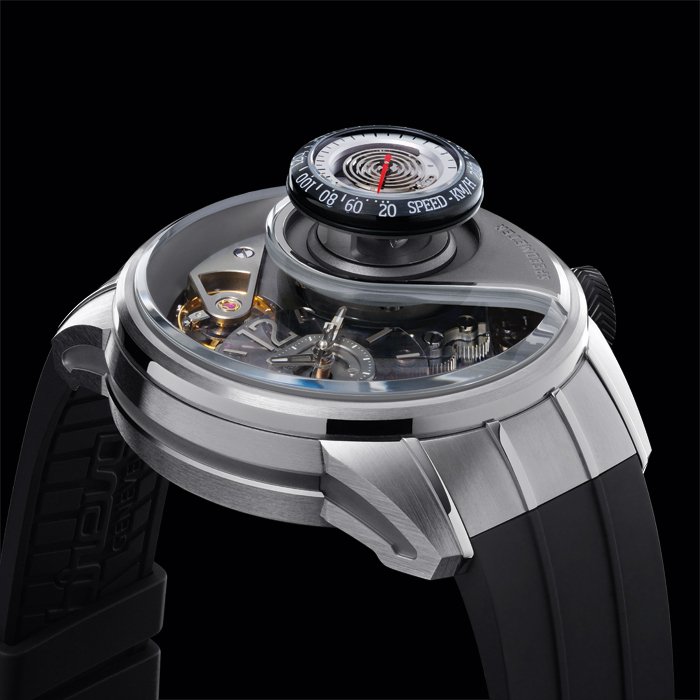 Breva has espoused an unusual take on watchmaking. Its Genie models, launched in 2013, have much in common with scientific instruments. The first complication was a barometer, a sort of weather-forecasting watch. The second, sportier series, was built around an altimeter. The new model, the Genie-03, which goes on sale in June in a limited edition of 55 (CHF 48,000), includes an anemometer that calculates ‘instant speed’ (not to be confused with the tachymeter, which calculates average speed) and maximum speed. This scientific gambit is an accurate reflection of the brand’s name: ‘breva’ is the name of a wind that blows over Lake Como in Italy. We hope this southerly breeze bodes well for the future of the horological start-up! (SM) 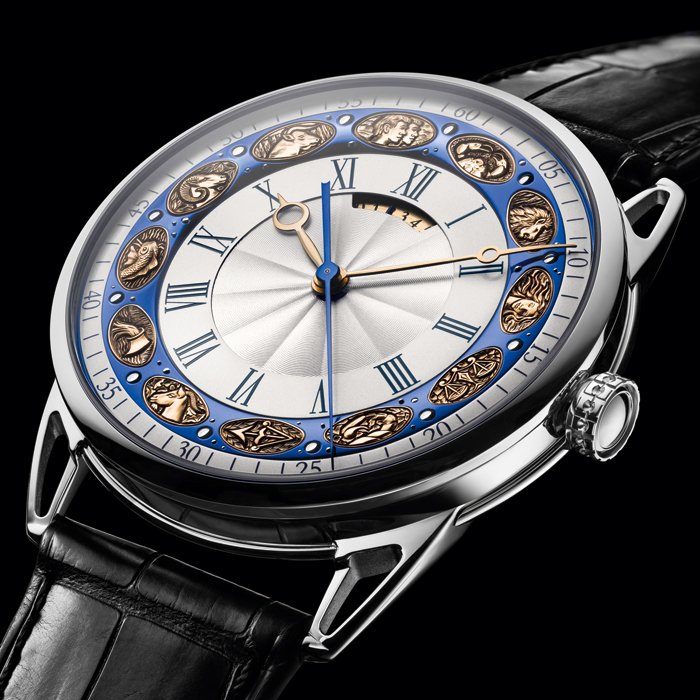 It is always a distinct pleasure to meet Denis Flageollet, the watchmaking heart of De Bethune. David Zanetta, its aesthetic soul, prefers to play the deus ex machina, but he is also entirely present in the unique watches that the two men create together. Introducing the latest DB25T Zodiac, Denis explained that it was about “rediscovering emotion in historical fine watchmaking.” Dials decorated with symbolic zodiac figures flourished in the classical watchmaking of the golden age. Here they are given new life, finely carved into a stunning watch of rare simplicity and rare emotion. But De Bethune has plenty more tricks up its sleeve, notably in its more technical pieces, which we will come back to in our forthcoming Baselworld issue. (PM) 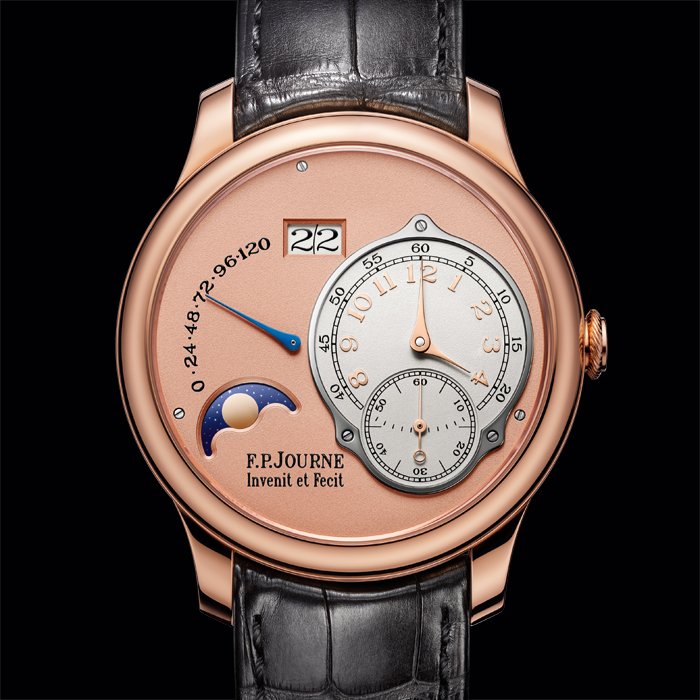 “I am always going back over my collections. In 2000 I revisited the Resonance, reworked the movement completely, and added a new, rather sophisticated free detent escapement, which no longer needs a spring. The escapement wheel is making a comeback. In the same vein, I have now returned to one of my classics, the Octa Lune, which was starting to show its age. I redesigned it, enlarged it and substantially improved its readability by, among other things, doubling the size of the date,” explains François-Paul Journe. Who could fail to rejoice at the renaissance of this elegant and understated watch, the epitome of Journe’s watchmaking. But we should also prepare for the long-awaited launch of two models that could not be more different: the Quantième Perpétuel and the Elégante, whose technical problems have now been resolved. Watch this space. (PM) 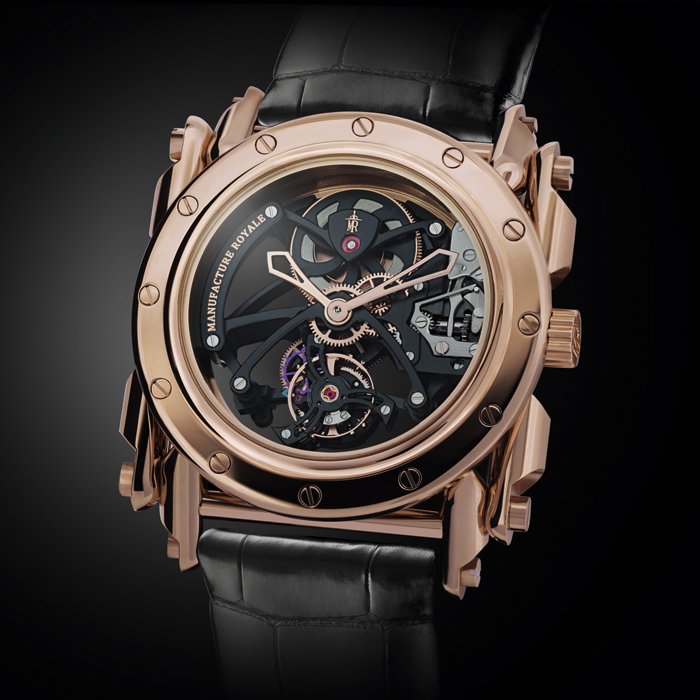 Bought a year and a half ago by the Guten family, the ‘Voltairian’ firm presents a new calibre, the MR-06: a flying tourbillon with skeletonised movement (yes, another one!). It follows a tourbillon minute repeater (MR01), a tourbillon (MR02) and a tourbillon with power reserve indicator (MR03). The new movement will drive the Androgyne Origine, produced in a series limited to 20 in gold and 45 with matte black PVD coating, with prices ranging from CHF 56,000 to 72,000. The brand turned over 150 watches in 2014 and hopes to sell 200 this year. But what of the MR04 and 05 calibres? Did they miss the boat? See you in Baselworld... (SM) 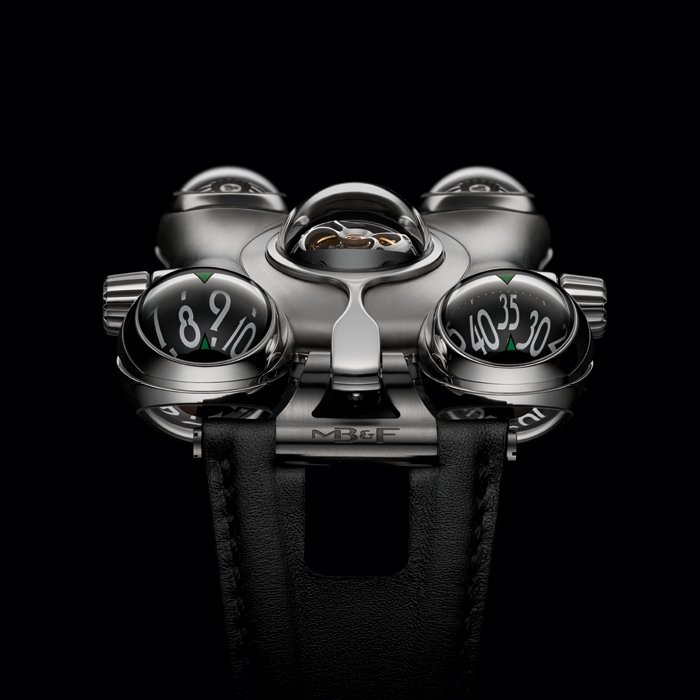 Amply living up to its reputation as a ‘horological laboratory’, MB&F is launching into outer space a ‘pirate’ watch unlike anything you have ever seen. Its organic forms are dominated by four sapphire domes in its four corners housing the regulating ‘turbines’ for the winding mechanism, and hemispherical hour and minute indicators. The central dome opens up to reveal a flying tourbillon with a ‘retractable hemispherical shield’ that protects its beating heart from UV rays. Inside, a highly complex motor required three years’ work to perfect, and mind-numbing 90° angular gears to work around. But the HM6 Space Pirate has now lifted off. We can also soon expect the latest edition of the HM3 Frog, MB&F’s bestseller, with more than 500 sold out of a total of 1,500 pieces produced by MB&F since it began. There is more to discover in our next issue. (PM) 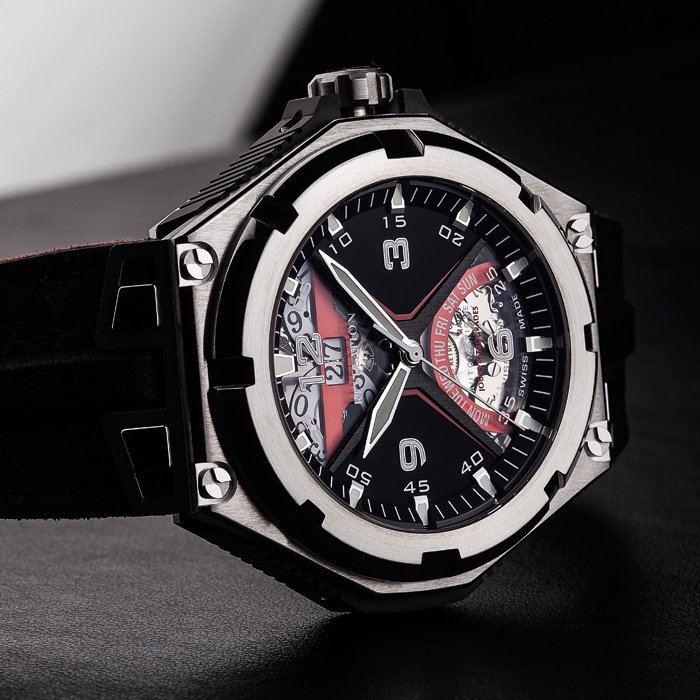 In the words of Revelation, “It was important that we began to show off some of the great potential of our mechanical system, which essentially allows a single watch to have two faces, whether with the aid of polarising crystals, as was the case hitherto, or some other element.” To illustrate his comments, Anouk Danthe shows us the prototype of a breathtaking ladies’ watch that can reveal or conceal a ceramic ladybird. The powerful and more obviously sporty Revelation Legend displays the hour, minute and seconds against a black background, which opens to reveal a large date and power reserve indicators on a deep red background. Anouk Danthe is optimistic: “Things are starting to happen, distributors seem to be reassured by the progress we are making, retailers are showing more sustained interest, the press is following us.” We look forward to seeing more at Baselworld. (PM) 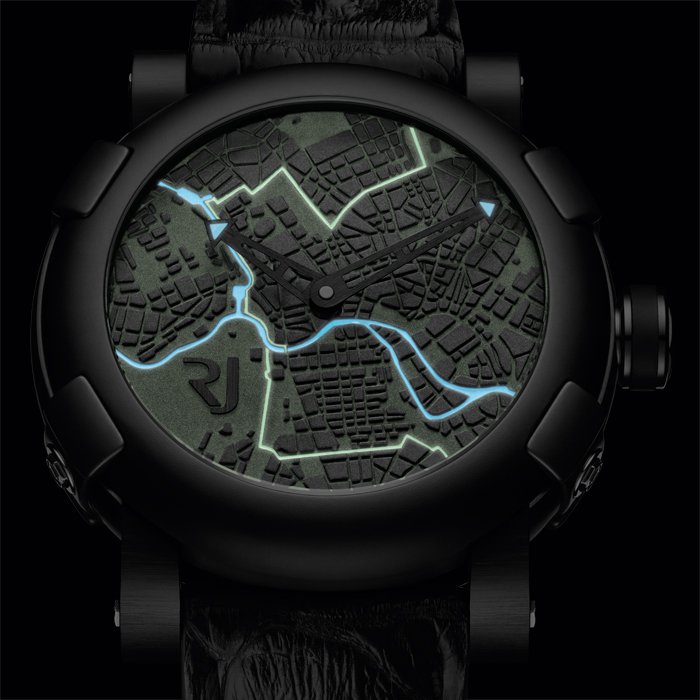 According to Manuel Emch, its astute CEO, the brand found its audience, with its unique DNA, by ‘concretising’ (both literally and figuratively) in its watches some of the great legends that touch the collective imagination. Among the latest models to be launched is the Batman, released in October 2014, limited to 75 pieces. There is also the Berlin-DNA, which celebrates the 25th anniversary of the fall of the Wall and supports the East Side Gallery, the world’s largest open-air gallery, where street artists are invited to give free rein to their imagination along a 1.3 km stretch of the wall. The watch features a map of Berlin, with the wall traced in red. On the back there is the famous ‘Fraternal Kiss’ of Leonid Brezhnev and Eric Honecker, one of the most well-known graffiti from the East Side Gallery. (SM) 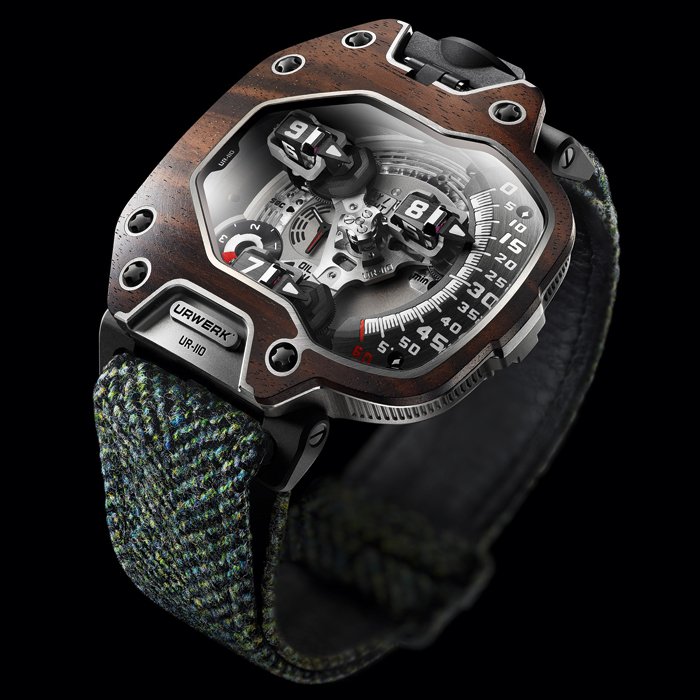 It’s amazing what a little bit of wood and a strip of tweed can do for a watch! Urwerk’s usual practice and strategy is to close down a collection after a few short years. Accordingly, the UR 110 has been invited to its last dance. On this occasion, it wears a bezel of rare wood, black or red macassar ebony, and sports a tweed strap. And in the process, it has been completely transformed. For the first time, Urwerk has given one of its watches a look that is less technical but far more... posh. A touch of English refinement, like the cosy interior of an old Jaguar, contrasts with the futuristic satellite display. Limited to two sets of five units. (PM)