On the beaches of Dakar, lapped by the Atlantic, time is on the move. It slips between the Western tourists languishing on the sand of Yoff or the pebbles of Mamelles. Its Senegalese – or occasionally Guinean – pedlar is weighed down with Hublot, Rolex and Breitling watches that, he will swear, “fell off a lorry”. These imitations are sold between 5,000 and 10,000 West African CFA francs (9 to 18 dollars).

On the beaches of Dakar, lapped by the Atlantic, time is on the move. It slips between the Western tourists languishing on the sand of Yoff or the pebbles of Mamelles. Its Senegalese – or occasionally Guinean – pedlar is weighed down with Hublot, Rolex and Breitling watches that, he will swear, “fell off a lorry”. These imitations are sold between 5,000 and 10,000 West African CFA francs (9 to 18 dollars).
A

very modest sum for a client versed in the art of negotiation. But for local watch retailers such as Darwiche, these ‘chinoiseries’, as Randa Darwiche calls them, actually carry a much higher price. “This competition has saturated the market since 2010, threatening our activity,” denounces the manager of L’Horlogerie du Sénégal. “These watches are present on every market of the capital, in the streets and on the beaches. It’s a catastrophe. The pieces only last a few months. Some people bring them to us for repair, but it’s no use, since the mechanisms are all in plastic. We don’t even get to change the battery.”

Two and a half years ago, Randa took over the family watchmaking business, located on one of the most popular shopping thoroughfares of Dakar, Avenue Lamine Gueye. The shop still has old-fashioned wood panelling on the interior. Raymond Weil and Yema stickers are yellowing on the till – a memory of the good old days when prestigious Swiss and French brands were still selling in the Senegalese capital. “Those days are gone,” sighs Huguette, Randa’s mother. She was here in the 1950s when the store carried premium imports: Rolex, Longines, Omega, Lip, Nicard, Cupillard, Universal and Breitling. But for ten years, it has only carried Japanese watches. Casio and Seiko. So Huguette keeps her stickers as a souvenir of an opulent time when Mohamed Darwiche – her husband and the founder of the store – imported Breitlings for the Senegalese air force. Randa remembers travelling to the Doubs Valley as a child with her father to purchase ODO clocks. “We went to Morteau to stock up,” she recalls. “Then we visited La Chaux-de-Fonds where we bought components of every calibre for our repair service.” A passion that brought her to work at Breitling Canada for ten years.

In the 1980s, L’Horlogerie du Sénégal employed three watchmakers full-time to repair 18 watches a day. Today, the volume has seriously diminished. “We only repair ten watches a week, and we only sell about ten a month,” asserts Randa. “Well, we don’t actually repair them. We change the motors, batteries and straps.” As is the case abroad, the Senegalese watch sector has paid the price of successive upheavals. The quartz crisis in the 1980s, followed by the advent of Chinese imitations and mobile phones. “The day before Ramadan, we used to have so many alarm clocks to wind, we had blisters on our fingers,” she recalls. “But in the last ten years, people have come to use the alarms on their telephones. While the watch market figures in Europe and the United States are showing linear growth, the market here in Africa has been in decline for twenty years.” She attributes the responsibility for this decline to the disappearance of the middle class and the polarisation of inequalities, dragging African purchasing power down. 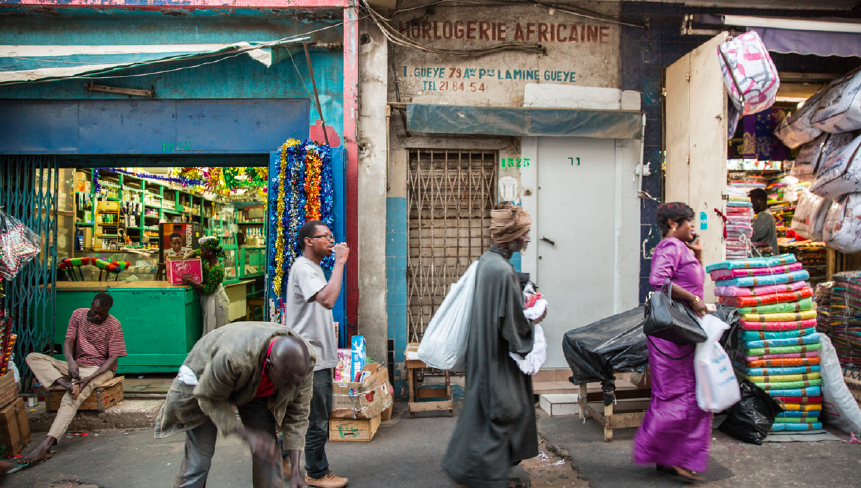 Twenty metres away, at the Gambetta watch store – the oldest in Senegal – the Arzouni family places the blame for the drop in their activity principally on excessively high customs duties. “Import taxes amount to 50% of the price of a watch, a piece, a battery or a mechanism,” complains Samir Arzouni, grandson of the founder of this boutique of reference. “We have to sell them for twice the price as on the European market,” he explains. “That is why we have had to resort to mid-range and low-range watches. Rich Senegalese people prefer to purchase their luxury watches in Duty Free stores when they travel abroad.” The luxury Omega, Rolex and Rado watches that filled the window in his grandfather’s time are gone. “Today, we sell Fossil, Casio and Pierre Lannier watches.” Watches ranging from 15 euros to a few hundred euros, but no more. “Women purchase these lowpriced watches. They love the shiny gold plating. The trend in the last few years has been oversized watches, but that is starting to fade. People keep up with styles abroad,” recounts Samir. “Today, we are getting a more diverse clientèle: principally Senegalese, but occasionally foreign. What keeps us going is that the Senegalese consider the watch as an integral part of any outfit. It is a piece of jewellery, a reflex that people have managed to maintain... Even though, all too often, it is a cheap ‘bling’ piece.”

In this workshop, the family – who arrived with the Lebanese wave of immigration in the 1950s, as is the case for the majority of watch professionals in Senegal – continues to train a few young apprentices. But the meticulous art of watchmaking mechanics has given way to the simple replacement of the movement or battery. “We work with FE, ISA, ETA and Miyota movements when we manage to procure them,” explains Samir Arzouni, who trained for one year at the French national agency for professional training (Afpa) of Besançon in 2006. “The problem is that prestigious watchmakers have decided to limit the access to certain pieces. These days, you have to be qualified by their brand, after following specific training, in order to obtain the movements. This has pushed us into dealing with mid-range watches. With Fossil and Lannier, we use Japanese or Chinese movements, which cost less to completely change than to repair.”

To survive, watch shops in Senegal have had to diversify. Some have begun to offer money transfer services, while others – such as Randa’s – sell essential oils and car remote batteries. As for Samir, he is planning on selling smartphones and connected objects, in keeping with the expression, “if you can’t beat them, join them.” 300 metres further up on the Avenue Lamine Gueye, Time Shop is the only watch shop to pursue mid-range products and to deal exclusively in clocks and watches. With thirteen years’ experience as an official retailer for Swatch, Tissot and Festina watches, the manager, Diana Chirazi, regularly attends Baselworld. She plans to go there again this year to bring new brands to the African market. “When I got started with my sister, I was aiming to sell 5,000 watches per year,” she states. “But we never reached that number. And in the last few years, we have gone from 2,000 pieces to 1,200. Even though I have about 200 regular clients, Senegal remains a poor country, and I don’t have a great deal of hope in the future. It is impossible to conduct a market study here like you do in Europe. Here, we must attempt to innovate without much confidence in our success. It’s very risky.”

The Darwiche family shows the same defeatism. “In the long term, I think that watch shops will disappear from Africa,” confides Randa. The Senegalese watchmaking school already closed a few years ago. Ibrahima Gueye, the first black African watch repairman to master the replacement of a balance wheel, is 90 years old today. He is a living legend, a watch enthusiast who still keeps shop just 100 metres from here. One of the last connoisseurs. “Today, when you say Parmigiani, people think you’re talking about cheese.”

With the rural depopulation of the 1990s, many of the farmers from the peanut-growing area of Senegal set out to try their luck in the capital. “They became shopkeepers, selling every trinket imaginable,” he thunders. “Nowadays, the imitation watch is killing local craftsmanship.” On the way back up Avenue Lamine Gueye, just steps away from the watch shops, it is hard to ignore the vast building of the Sandaga market, a temple where you can “buy anything, sell anything”. As you stand in front of the stalls overflowing with trinkets, it is not uncommon that someone will nudge you. A slender youth will show you a shiny, featherlight Rolex, whispering into your ear, “10 euros for a watch that fell off a lorry.”