Another one bites the dust. All on the same day, we learned that Raymond Weil was quitting Baselworld as of 2019, then that Audemars Piguet and Richard Mille were quitting SIHH as of 2020. One week later, it was Corum’s turn to announce its departure from Baselworld starting with the next edition. Is the future of these trade fairs – or shows, to use the more upmarket terminology – in jeopardy? What would be the consequences if these physical community gatherings were to disappear?

Another one bites the dust. All on the same day, we learned that Raymond Weil was quitting Baselworld as of 2019, then that Audemars Piguet and Richard Mille were quitting SIHH as of 2020. One week later, it was Corum’s turn to announce its departure from Baselworld starting with the next edition. Is the future of these trade fairs – or shows, to use the more upmarket terminology – in jeopardy? What would be the consequences if these physical community gatherings were to disappear? 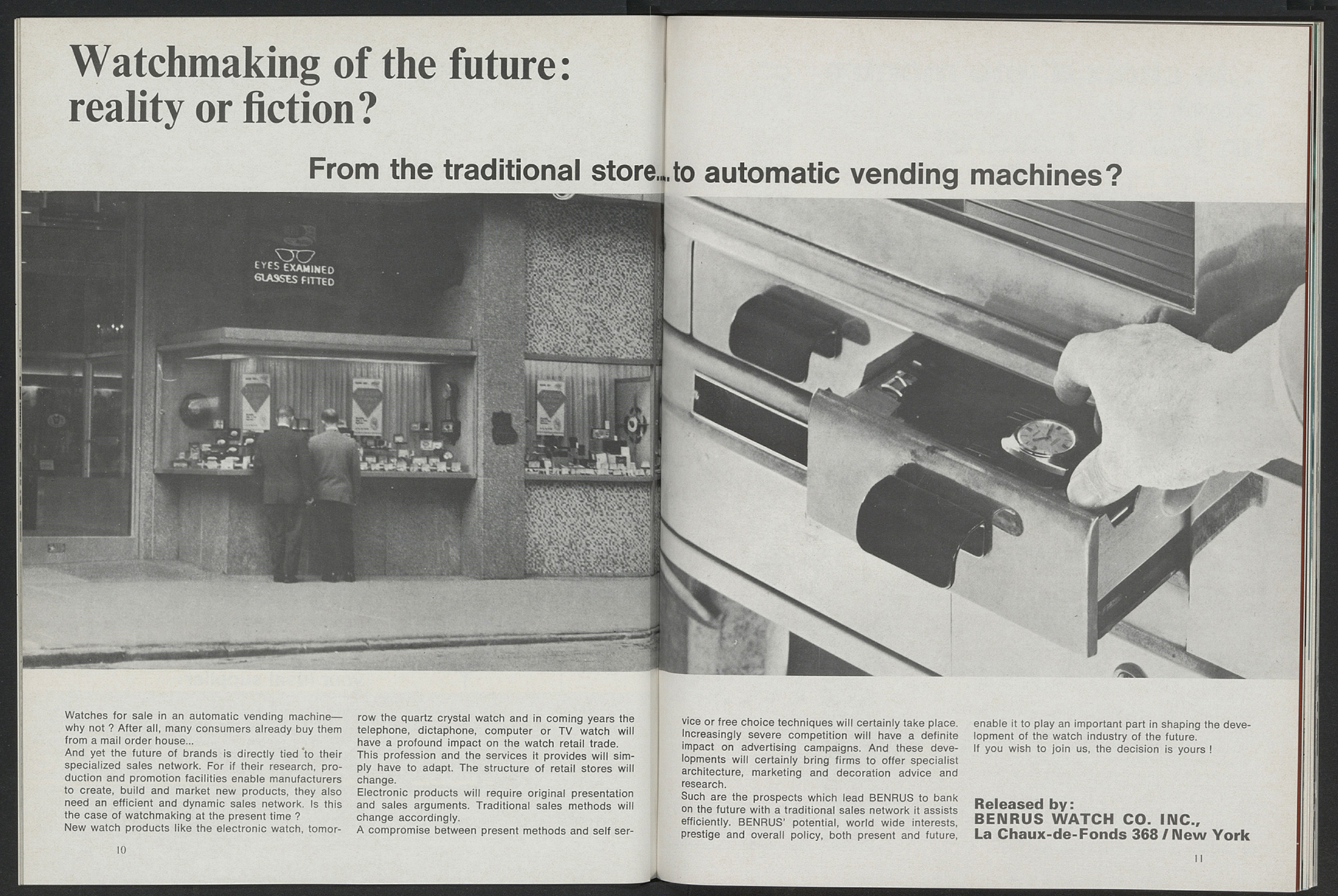 50 years ago, we were already suggesting that traditional commerce was dead and that the future lay in “automatic vending machines”… For example, this advert, published in Europa Star in 1968, read: “The new watch products, such as the electronic watch, tomorrow’s quartz watch, and in the years to come, the telephone, dictaphone, computer or TV watch will have a profound impact on the retail trade”. It took 50 years for this prophecy to be fulfilled…Europa Star 3/1968

At the announcement of the Swatch Group’s departure from Baselworld, all the commentators, including ourselves, accused the trade fair of every ill. The grand trade fair on the Rhine had committed the sin of arrogance, had been too greedy and, taking its lofty position for granted – we refer to it not as “Basel”, but “BaselWORLD” – was incapable of adapting to the new market configuration, the millennial culture and new digital habits. Basel had not, it was said, understood that its usefulness was no longer strictly commercial; instead, it had to become a “forum”, a cultural agitator, a mouthpiece for the media, a lobbying centre for the world watchmaking industry. Every one of us vaunted the counter-example of SIHH, praising its recent opening, its welcoming atmosphere, its determination to overcome its Richemont-biased image and its well-negotiated curve towards becoming a next-generation trade fair. But this was to misdiagnose the situation.

Every one of us vaunted the counter-example of SIHH. But this was to misdiagnose the situation.

That Raymond Weil has decided to quit a Baselworld after the desertion of the Swatch Group is not a surprise. It is the domino effect. CEO Elie Bernheim makes no bones about it: “The brands like Longines, Omega, Tissot, Rado, Mido or Hamilton are all brands within my competitor environment. I’m not sure that the distributors will continue to come to Basel if those brands aren’t there any more…”. And other dominos, deprived of the suction effect exercised by the Swatch Group, are likely to fall one by one. Starting with Corum, which has just officially thrown in the sponge as well. Its CEO, Jérôme Biard explained it to us in these terms: “We are working hard, and successfully, to get Corum back on the same track as during the brand’s best years, when Corum occupied the prime space at the entrance to the Basel trade fair. Today, our number one priority is the retailer and the end customer, with the journalist as the opinion leader on the brand. So we need a change of concept and to invest the budget we allocate to this type of event in a different way."

But the unexpected, simultaneous announcement of the departure of Audemars Piguet and Richard Mille from SIHH puts an entirely different face on things. One trade show here or there is not the problem; it is the very idea of trade shows that is beginning to fall apart. And this need for a transformation of the format does not concern solely watchmaking, far from it. The same phenomenon of disenchantment with the traditional trade show can also be observed in the automotive sector, fashion, publishing, and so on. All the leavers justify their departure with more or less the same discourse: “placing customers at the centre of our sales strategy,” “establishing direct and personal relationships” with them in a context of a “drastic reduction”, to quote Richard Mille, in the number of multibrand retailers and a general reconfiguration of distribution.

But since nature abhors a vacuum, we can quite logically expect a proliferation of “private” meetings and events in the place of these grand, collective rendezvous, one consequence of which will be a fragmentation of the general narrative about watchmaking. While some – the wealthiest brands – will come out of this unscathed, others, whom we shall refer to for simplicity’s sake and without the slightest derogatory intent as the central watchmaking “swamp”, will be penalised permanently.

While some – the wealthiest brands – will come out of this unscathed, others, whom we shall refer to for simplicity’s sake and without the slightest derogatory intent as the central watchmaking “swamp”, will be penalised permanently. 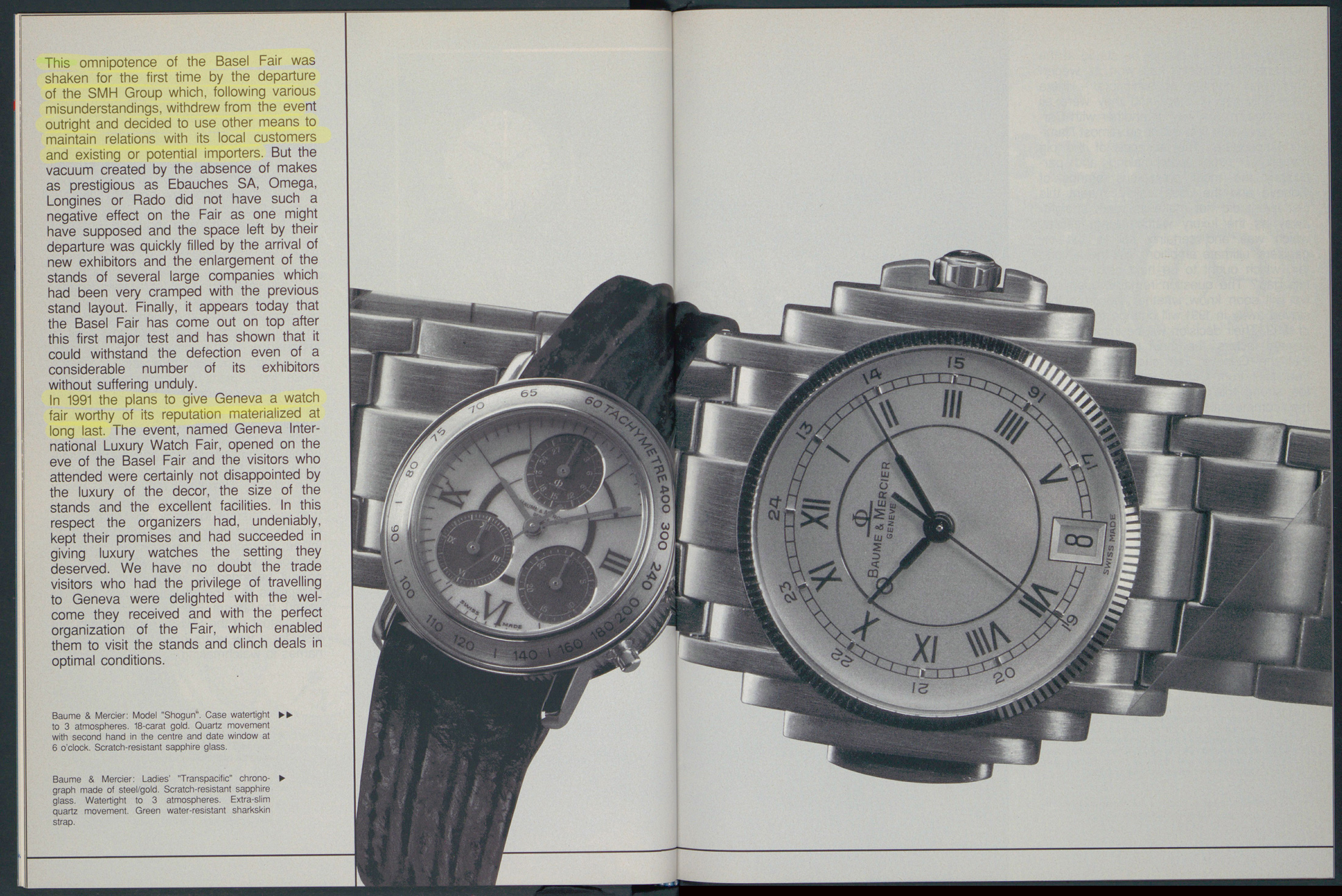 History repeats itself. Back in 1991, while the Basel show was attempting to recover from the departure of the SMH Group (the future Swatch Group) – and of brands like Omega, Longines, Ebauches SA – Geneva launched the Geneva International Luxury Watch Fair, with five exhibitors led by Cartier: an embryonic fair that became SIHH. Europa Star 4/1991

The consequence of concentration

This evolution went hand in hand with a concentration of the watchmaking sector into strong blocks or powerful rivals. But this took place to the detriment of more fragile or more mainstream brands who, in the absence of any federating event, had the utmost difficulty in getting into the spotlight. The Movado group, a precursor of this evolution, last year organised its own winter “Davos” to replace its massive presence in Basel. Who talked of this meeting, apart from the small circle of initiates themselves? Virtually no one outside the specialised press, and precious little was said even then! The major global press and media outlets like CNN or the New York Times, as well as the myriad bloggers and other “influencers”, who used to travel as far afield as Basel or SIHH, where they could pick and choose and compose across-the-board presentations shedding light on general watchmaking trends, will think twice before making the journey for scattered brands; they run the risk of acting more as promoters than journalists (even though it is, alas, a well-known fact that in every domain promotion and “communications” are superseding analysis and objective presentation). 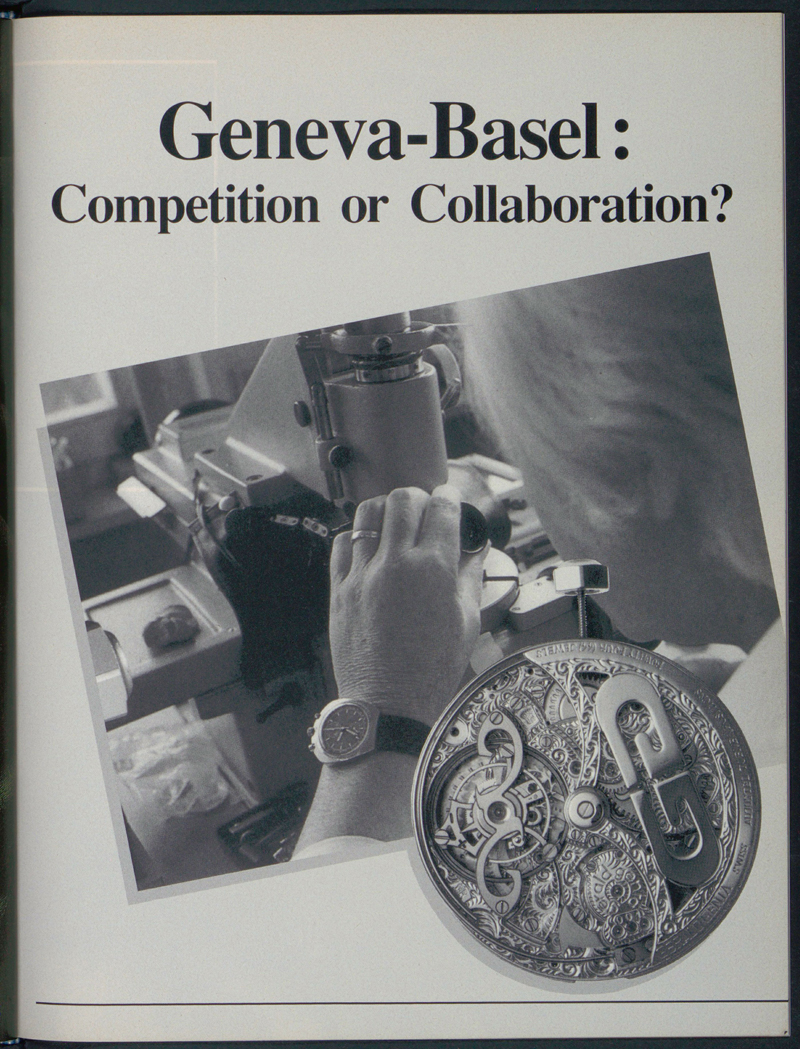 The need for grand "mammalian” gatherings

It seems evident that watchmaking will suffer from the absence of these grand "mammalian” gatherings, as our colleague Grégory Pons judiciously describes them. At Basel especially, the “democratic” aspect of a meeting where large and small physically mix will be sought a serious blow, starting this year. But all – large, small and medium-sized – will lose out in the long term. The mutual emulation, the sharing of experience and knowledge and the productive confrontation between all the actors, in all their diversity, of a single industry will be lacking.

And diversity is all-important.

As specialised journalists, thanks to Basel – and to a lesser degree SIHH – we had opportunities for unexpected encounters, for meeting people who thought out of the box and for putting the spotlight on original, sometimes revolutionary, initiatives. Because at Basel, which attracted in droves anyone who had anything remotely to do with watchmaking, and by no means just the brands proper, surprise and astonishment could strike not only on the stands themselves, but also in the aisles, corridors and surrounding bistros.

There was never a Baselworld where you were not accosted by some horology geek who, in their own little corner, had concocted some invention, product or innovation and was keen to unveil the product of their own mind and making to the watchmaking “community”. But what if there is no “community” anymore?

There was never a Baselworld where you were not accosted by some horology geek who, in their own little corner, had concocted some invention, product or innovation and was keen to unveil the product of their own mind and making to the watchmaking “community”. But what if there is no “community” anymore?

In more than twenty years of attendance, we have seen certain watchmaking Mozarts attain fame. Perhaps the Rolexes of the future are wandering in its aisles….

But if there are no more aisles, there will be no more exchanges, no more hopes, wild or vain. In short, no more life. Because the most successful will prefer the confines of their uniform, sterile and policed group to the fruitful disorder of the motley crowd. 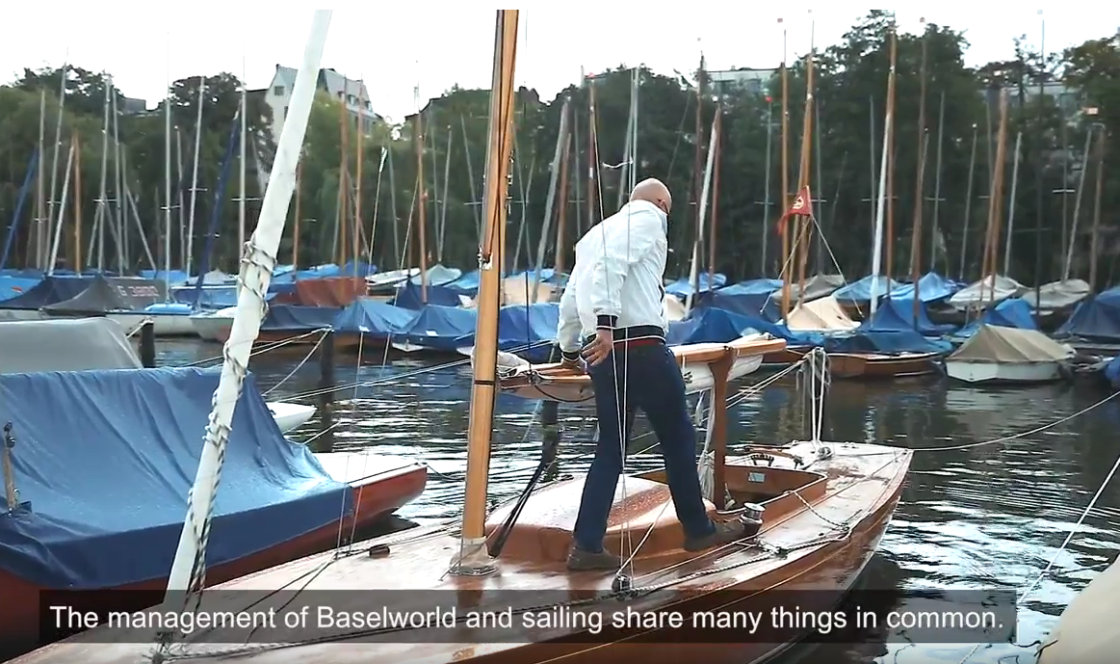