“By imagining tomorrow, which apparently no other animal is capable of doing, we have given value to the present.”
Albert Jacquard

“By imagining tomorrow, which apparently no other animal is capable of doing, we have given value to the present.”
Albert Jacquard
W

hy is horology so attached to the animal world? Why this love of butterflies, birds, horses and tigers? Not to mention snakes, monkeys and scorpions. Is it a simple question of logic – horology being the result of observation of the heavens – that the animals of the zodiac and those metronomes of cosmic time, the constellations, should take pride of place in it? Is it because the peasant watchmakers of Switzerland, immersed in nature, indulged their passion for timepieces with one eye on the cattle?

Or is it – as for Marie-Antoinette – solely a matter of decoration: birds, flowers and sheep composing idyllic and colourful landscapes that the enamellists loved – and still love – to reproduce? Is it because of the Emperor of China, with his great fondness for mechanical birds?

Or because one day, a carpenter in the Black Forest invented the cuckoo clock?

It is no doubt for all these reasons at once. And it cannot be denied that animals are still inspiring watchmakers of every ilk. Even today, the act is decorative more than anything, and animals of every shape and form account for the vast majority of art and craft production (a privilege animals share with flowers).

Animals even constitute a central symbol for certain brands. One brand stands out in particular in this respect: Cartier, which has made the Panther its icon, ubiquitously present or suggested. Cartier is not alone, but the brand has produced variants of its animal in every possible genre – painting, enamel, engraving, wood marquetry, stone micro-mosaic and Etruscan granulation, to cite just some examples, right through to actual items of jewellery. And Bulgari is busy doing the same with its famous Serpenti.

There is a delicious passage in Jean-Christophe Nothias’ biography of the Enlightenment horologer Pierre Jaquet-Droz*. Jaquet- Droz had an exchange of views with his clockmaking contemporary Ferdinand Berthoud about their differing approaches to horology. Faced with his friend’s “Spartan rigour” in his dedication to the pursuit of absolute precision, Pierre Jaquet-Droz could not deny his “singular attraction to beauty, grace and delicacy, and all their spectacular and breathtaking qualities.” To this end, the horologer drew upon “nature and its marvels, with singing birds and their improbable colours, and the spectacle of the flora and fruits of Paradise.” Pierre opted for wonder. To reach these heights of elegance, he needed the resources of the aristocrats with whom he consorted, and their taste for ostentation. Nature, and particularly birds, formed a constant backdrop to the life of Pierre Jaquet-Droz, a seasoned traveller who remained “attached to landscapes of peace, tranquility and freedom.” Like his contemporary Rousseau, his long, meditative walks supplied the inspiration for his future creations and restored the equilibrium he needed to accomplish his feats of technical mastery. It was this fusion of the natural and the mechanical, as well as his humanist curiosity, that gave rise to the many automata with which he charmed the courts of Europe, particularly the King of Spain, and which were exported as far as China, as well as inspiring the motifs with which his timepieces were decorated, and of course the famous “singing bird” music boxes for which the company is still celebrated today.

* The Génie Jaquet-Droz: The fascinating life of a watchmaker in the Age of Enlightenment, Jean-Christophe Nothias, Editions Montres Jaquet Droz, 2013

The Pierre Jaquet-Droz mechanism of a singing-bird pendulum clock Under restoration. It is likely that Napoleon himself commissioned this piece to give to the Princess of Würtenberg.

THE ANIMAL WORLD IS NO LONGER NEUTRAL GROUND

The advantage of animals is that they are a subject on which everyone agrees, they’re nice to look at and are in a weak position when it comes to protesting about rights of personal portrayal. But in these environmentally challenging times, animals have become a major global issue, which has nothing to do with their inherent beauty. Many of the favourite species of decorative illustrators are now endangered, from bears to pandas, big cats, reptiles, elephants and dolphins.

Consequently, more and more watchmakers have awoken to the issue and are backing the protectors of nature by funding programmes to protect such species. The most recent example is the manta ray, an endangered species that adorns the latest Patravi ScubaTec by Carl F. Bucherer. This magnificent beast now “sponsors” a special series to support the Manta Trust (see ES Time.Keeper 3/17).

Once a neutral, pleasant theme, animal illustrations are no longer innocuous, but charged with hidden meaning. But they sell well. And Swiss watchmakers spotted the commercial potential of the totemic animals of the Chinese New Year long ago. Cock, pig, monkey, horse or serpent – for each year in the Chinese zodiac there are special watch series that reproduce like rabbits and sell like hot cakes. 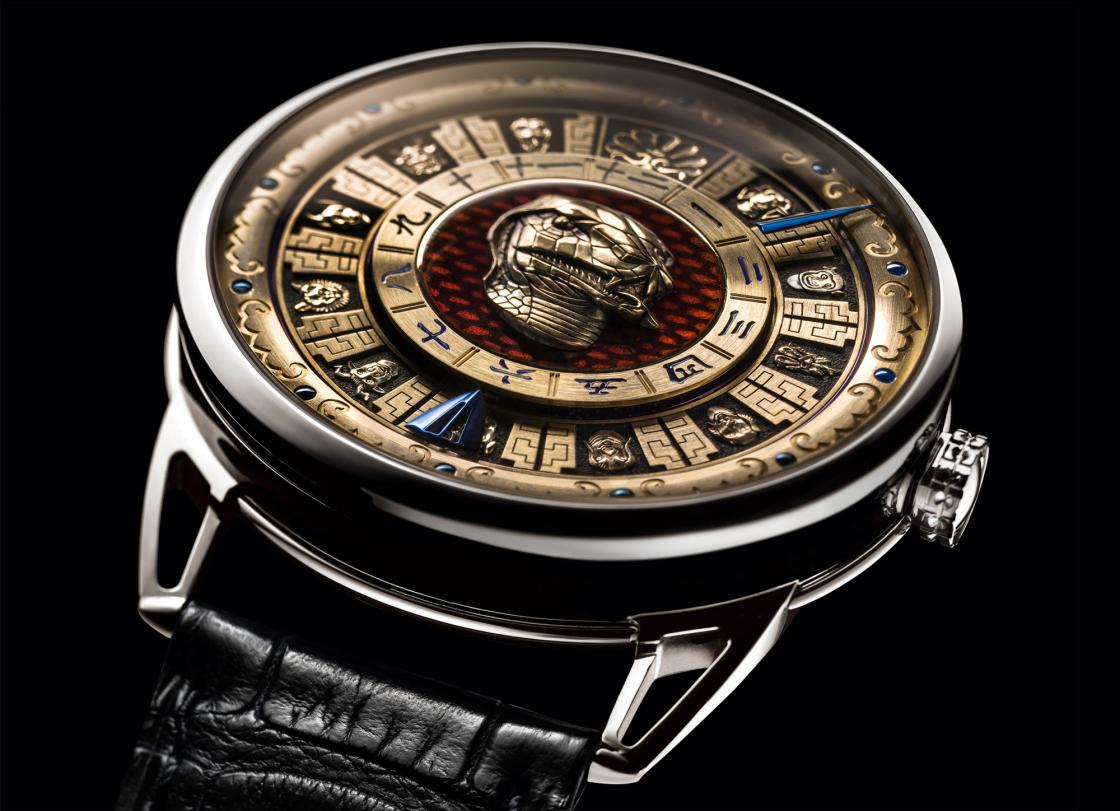 Presented in 2013, the De Bethune DB25 Imperial Fountain is a set of 12 watches, each featuring an animal head of the Chinese Zodiac engraved in relief. The De Bethune DB25 Imperial Fountain is inspired by the animal heads of the water clock at Beijing’s Yuan Ming Yuan (Old Summer Palace). The rest of the dial is also hand engraved, with peripheral hands so as not to obscure the engraving. 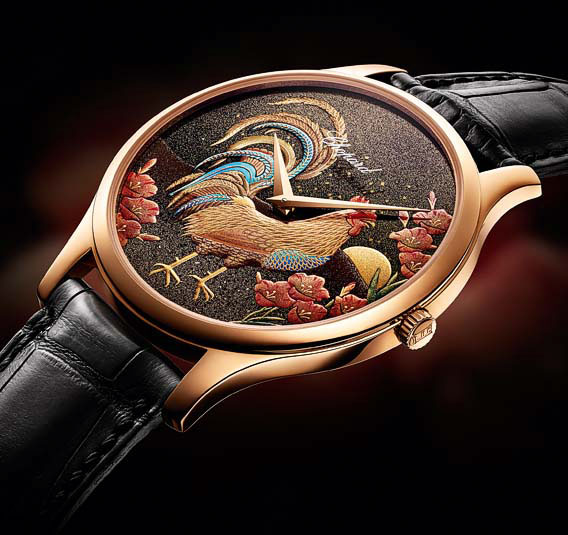 Proclaimed a “Living National Treasure” by the Japanese authorities, artist Kiichiro Masumura has created this unique dial for the Chopard L.U.C XP Urushi – Year of the Rooster (2017) based on the time-honoured lacquering techniques of Urushi and Maki-e. Showcased within the understated lines of the ultra-thin L.U.C XP in 18-karat rose gold, this timepiece is equipped with the mechanical self-winding L.U.C Calibre 96.17-L.

Vacheron Constantin Métiers d’Art The legend of the Chinese Zodiac Year of the Rooster. The foliage motif on the dial, based on classic Chinese iconography, is etched directly into the metal. The pattern remains semi-embedded and stands out from its gold base by a subtle stagesetting of variously accentuating reliefs creating a depth effect. The rooster, made of platinum or pink gold, is hand engraved and delicately applied to the dial centre. 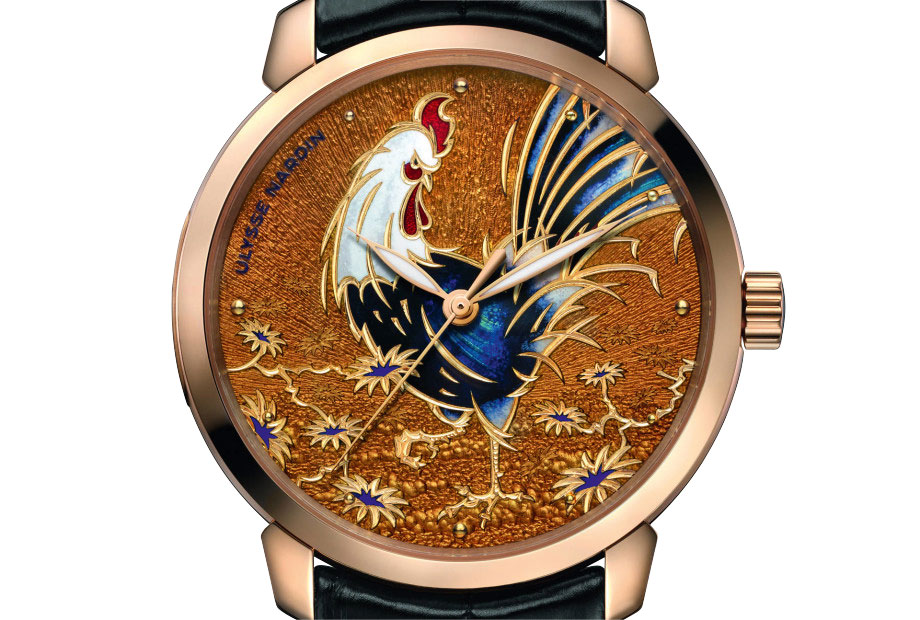 The Classico Rooster Watch by Ulysse Nardin comes in a 40mm 18k rose gold case and has an intricately crafted dial featuring an enamel rooster. The rooster is worked using the champlevé technique, in which the dial is carved to form pits where enamel can be added. The watch is limited to 88 pieces and is powered by Ulysse Nardin’s COSCcertified self-winding Calibre UN-81.

Having long remained resolutely conventional, watchmaking decoration has gradually – very gradually – evolved. For a long time, it remained anchored in the idealised, bucolic animal iconography of centuries past. But eventually, certain brands ventured away from this passé, traditional, now somewhat kitsch image to get closer to painting and the graphic arts – think the Escher birds, fish and lizards that inspired Vacheron Constantin. 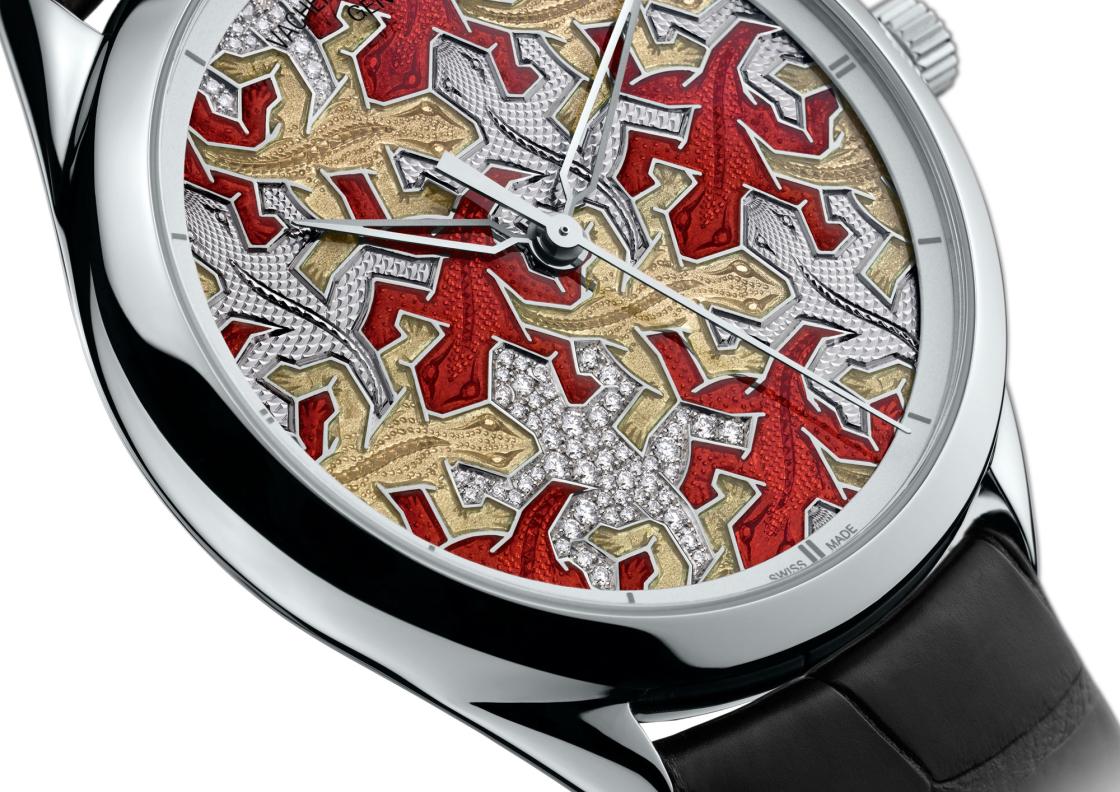 This stylistic evolution is unfortunately still somewhat timid, but we are starting to see timepieces that go beyond the simply decorative and look to the animal world for inspiration for form and ergonomics.

In this respect, the latest Aquapod from MB&F is a textbook example of a perfectly consistent approach. The designers of this diving watch explain it best: “HM7 Aquapod began its gestation as a horological jellyfish, and the architecture of its engine is appropriately biomorphic. Jellyfish are radially symmetric, Aquapod is radially symmetric. Where a jellyfish generates power from food caught in its tentacles, HM7 generates power from its tentacle-like automatic winding rotor. Where jellyfish have a radially symmetrical ring of neurons for a brain, Aquapod has radially symmetrical rings displaying hours and minutes. Where jellyfish have a hood or bell on top, HM7 Aquapod has an imposing flying tourbillon regulating the power generated by the rotor, and transforming it into the display of time.”

MB&F plunges into the water with HM7 Aquapod. The organic jellyfish-inspired design of HM7 Aquapod is counter-balanced by the very mechanical horology within: a central flying tourbillion tops the concentric vertical movement architecture, with indications radiating out from the centre like ripples in a pond. HM7 Aquapod began its gestation as a horological jellyfish, and the architecture of its Engine is appropriately biomorphic. Jellyfish are radially symmetrical, Aquapod is radially symmetrical. Where a jellyfish generates power from food caught in its tentacles, HM7 generates power from its tentacle-like automatic winding rotor.

ANIMALS AT THE SERVICE OF WATCHMAKERS

But watchmakers are not content simply to get inspiration from animals: they also use them as a source of numerous items. They take the wings from butterflies or feathers from birds to make filigree dials; they have a longstanding predilection for the mother-of-pearl that is found in shellfish, and use, or have in the past used, horn, tortoiseshell and ivory. And they make wrist straps from every possible and imaginable animal breed.

Fish, stingrays, alligators, caimans and other crocodiles; land animals such as cows, calves, ostriches, lizards and snakes, not to mention kangaroos, toads, and even beaver tails, go into making watch straps.

As for neatsfoot oil, lard and fish, they were used to extract mechanical oils “which are unctuous and make excellent lubricants, but have the great disadvantage of rapidly deteriorating in contact with air and of thickening over time,” as the handbook states. And old decal specialists still use a squirrel tail for fine-brushing the dial.

Piaget. Rigorously s﻿elected for its exact shade, its density and its texture, each feather is meticulously recut by hand, and then smoothed ready to be carefully arranged in its appointed place according to cleverly alternating contrasts and geometrical patterns. The miniature feather art technique is very similar to that of marquetry but composed of a mixture of duck, peacock and rooster feathers, partially covered with silver leaf.

Baume & Mercier Petite Promesse doesn’t feature an animal face on its dial but is mounted on a Banka leather strap. Banka leather is made in France and comes from the skin of the rainbow trout, initially celebrated and enjoyed in prestigious restaurants. The fish are farmed in an environment that perfectly suits their needs, where animal welfare ranks above productivity. Each strap is different: the trout scales form contrasting patterns that are accentuated by the tanning process. A trio of eye-catching colours: a luminous red, a bold green, and a vibrant blue.

THE 5,000 SPECIES REGULATED BY CITES CITES is the international convention that regulates trade in animals and products of animal origin, and sets up special taxes on or even prohibits trade in certain endangered species. The list of the 5,000 species concerned is dizzying. Here is a brief extract.