I’m hopeless at dates, not too good at names, slightly better on faces. When I was a student looking to rent somewhere inexpensive in London, I visited a house in Kilburn and was shown a small bed-sit. The landlady asked me if I had a good memory, I shrugged and admitted I was bad with dates. She then asked, “How about faces?” I replied not bad and she replied, “That’s good, ‘cos there isn’t a mirror in the bathroom.”

But back to dates. How about Saturday, April 21, 1979, a mere forty years ago, any thoughts? To jog your memory it was the year Sony released the Walkman and Margaret Thatcher became the first woman Prime Minister in the UK; the USSR invaded Afghanistan and China instituted a policy of one child per family; 23 people died in Nice, when a tsunami hit the French Riviera and it snowed for thirty minutes in the Sahara desert; the YMCA sued the pop group The Village People for libel because of their eponymous song; Walls proved to be a popular theme as Pink Floyd released their album ‘The Wall’, Michael Jackson launched his debut album ‘Off the Wall’ and not to be outdone, Wall’s Britain’s favourite sausage manufacturer were tonnes tonnes ahead of its competitors; and finally the quiz game Trivial Pursuit was launched providing hours of fun for people like myself who relish tidbits of useless information. So back to April 21 1979. Any thoughts yet? Well let me put you out of your misery: it was the opening day of that year’s 11-day Schweizer Mustermesse in Basel which eventually became our beloved brazen behemoth Baselworld.

I have no recall of the watches I saw forty years later but I do remember a multitude of stands selling sizzling schubligs (the Swiss equivalent of those Wall’s sausages I mentioned), whose smell permeated every nook and cranny throughout the fair. But watches? 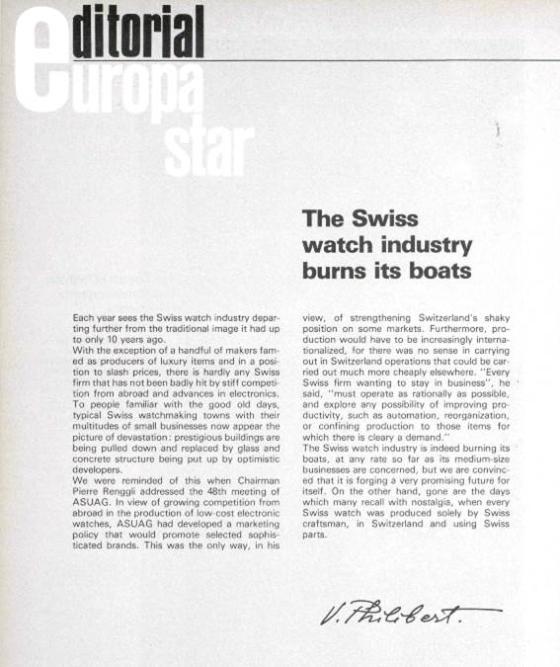 The time was right to delve into the amazing new archives that are available to subscribers of Europa Star. I looked online at the 1979 editions and saw that all the famous independent brands exhibited - Omega, Mido, Longines, Jaeger-LeCoultre, Vacheron Constantin, Tissot, Audemars Piguet, Girard-Perregaux, Rolex, Patek Philippe, Raymond Weil, Cartier to name but a few (it was the pre-group era) and also discovered an editorial entitled ‘The Swiss watch industry burns its boats’ by the then editor Valentin Philibert. He wrote about ASUAG wanting to strengthen Switzerland’s shaky position on some markets and that production would have to be increasingly internationalised for there was no sense carrying out in Switzerland operations that could be carried out much more cheaply elsewhere. Philibert concluded,“The Swiss watch industry is indeed burning its boats, at any rate as far as its medium-size businesses are concerned, but we are convinced that it is forging a very promising future for itself. On the other hand, gone are the days which many recall with nostalgia, when every Swiss watch was produced solely by Swiss craftsmen in Switzerland and using Swiss parts.”

Sizzling schubligs and burning boats - have we come full-circle?

TIME.KEEPER One of the good things about our place in Menton is that there’s no room for guests, although we make exceptions for our offsprings if they promise to stay (...)