Built to Perform: Sports Watches for 2006 and Beyond – Part 4

Pilots
Flying has always been linked to watches, ever since Louis Cartier made the first aviation watch for his friend, Alberto Santos-Dumont in 1904. The look of classic pilots' watches is very hot right now and even though many watches will never see the inside of a cockpit, most pilots' watches are designed to satisfy the conditions a watch would see when flying - extremes of temperature, shock, condensation, vibration and more.
Tutima is the official watch supplier to NATO and just announced that it is the exclusive manufacturer of the official Eurofighter Typhoon watch (the Eurofighter is the newest NATO fighter plane). Breitling is known as the watch of choice for many pilots and its line is chock-full of aviation engineering breakthroughs. Other companies that specialize in pilots' watches include IWC, Ernst Benz, Chase-Durer, Oris, Hamilton, Luminox and more. 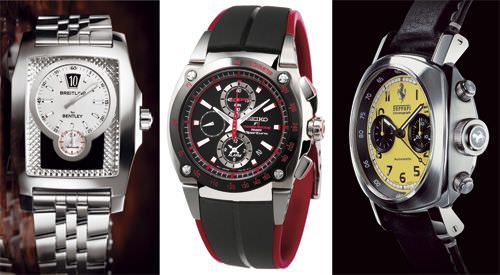 new Mille Miglia by Chopard and NASCAR by Tissot


Motor sports
Watch companies have been involved with motor sports for quite a long time, either as sponsors or official timekeepers, or both, and sometimes with the car manufacturers themselves. TAG Heuer is currently involved with the Indy Racing League and the McLaren F1 Racing Team, JeanRichard with the American Le Mans series, Chopard with the Mille Miglia, Rolex with the Daytona 24 Hour, Panerai with Ferrari, Jaeger-LeCoultre with Aston Martin, Audemars Piguet with Maserati, Parmigiani with Bugatti, Oris with the Williams F1 team and many more.
Most of these companies produce special or limited edition watches to celebrate events, partnerships with car manufacturers, races, drivers and more. These watches are not necessarily designed for auto-racing, but they do have touches of the auto-racing world in their features, design and construction. They are often chronographs, to remind the wearer of the importance of accurate timing. Very often they will have a tachymeter scale to facilitate gauging miles or kilometres per hour. They sometimes have design bits gleaned from the cars or materials used in their construction (tire rubber, carbon fibre, titanium, aluminium, etc.).
Jacques Leman recently signed an exclusive contract with Formula One and has introduced the Formula One watch and Seiko also introduced a special Honda F1 team watch at Basel.