The SWATCH GROUP has all bases covered

The SWATCH GROUP has all bases covered

Since 1 January 2005, when the group first started using the IFRS and revised IAS accounting standards, the price of its bearer shares has increased by 248.2 per cent and the income generated from those shares has tripled over the same period (from a dividend of 2.50 francs per share in 2005 to the 7.50 francs proposed for 2013 that will be put to the vote at the Annual General Meeting on 14 May 2014).

To put these figures into context, Switzerland’s SMI stock market index increased by 42.2 per cent over the same period, meaning that the Swatch Group has outperformed the index by a factor of six.

In its earnings press release published in February, the group claims an “auspicious start” to 2014 and maintains that “after four years of strong and dynamic growth by Swatch Group, as well as the entire Swiss watch industry, continued healthy growth is expected in 2014.” Amidst the euphoria, however, two points are worth noting: firstly, a 400 million Swiss franc windfall in the form of legal compensation paid by Tiffany & Co. undoubtedly had an impact on the year’s results; and secondly, the group misleadingly equates its 8.8 per cent increase in net sales in its watches and jewellery segment to a “significant” increase in market share, citing an increase in Swiss watch exports of only 1.8 per cent to the end of November 2013. Although the Swatch Group continues to enjoy a position of dominance, such a generalisation fails to take into account the role of the lucrative Swiss market, which is always absent from the export figures. Nevertheless, the group looks poised to build on this success further, as the latest developments at its watch brands show…

Time will tell whether Omega’s brand building efforts as official timekeeper of the Olympic Games will be impaired by the political tensions surrounding this year’s Olympic Winter Games in Sochi. But even before this the brand once again disrupted the Geneva show week with the announcement of two world firsts. One is the first-ever use of orange ceramic in a watch, on the eye-catching Seamaster Planet Ocean GMT, a luxury limited edition of only eight with a platinum case, brushed platinum dial and with platinum Liquidmetal® numerals on the rotating bezel in orange ceramic and a matching orange leather strap with platinum stitching.

Another limited edition of eight pieces, also in a platinum Seamaster Planet Ocean case, showcases the brand’s second major innovation: diamond setting on “hard bodies”. As well as having 69 baguette diamonds set into the case middle, this watch also has diamonds set into the black ceramic bezel and the transparent sapphire crystal case back (in the form of the Omega symbol). This is achieved by precision engraving using a special five-axis laser to hollow out the material, which is then filled with an exclusive 850-platinum Liquidmetal® alloy. The diamonds are then set into the alloy using the traditional technique. Both models are fitted with the co-axial calibre 8615 with second time zone indication and are water resistant to 600 metres / 2,000 feet. 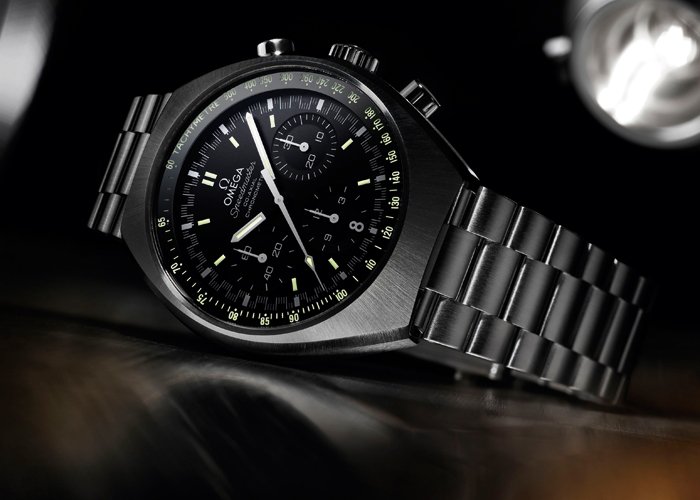 On a more accessible level, Omega’s appetisers for BaselWorld include a re-edition of the Speedmaster Mark II model that was launched in 1969, the year that the Speedmaster became the “Moon Watch”. This distinctive barrel-shaped piece with its two-piece case in brushed stainless steel does not have a bezel, so the tachymetric scale is metallised directly on to the sapphire crystal, with the numbers illuminated by a SuperLuminova ring underneath. But in spite of this retro look and the classic Speedmaster dial, the heart that beats inside is far removed from the legendary manually-wound calibre 861 that was fitted in the original Speedmaster Mark II models. It has been replaced by the state-of-the-art co-axial calibre 3330 self-winding column-wheel chronograph movement with COSC certification. 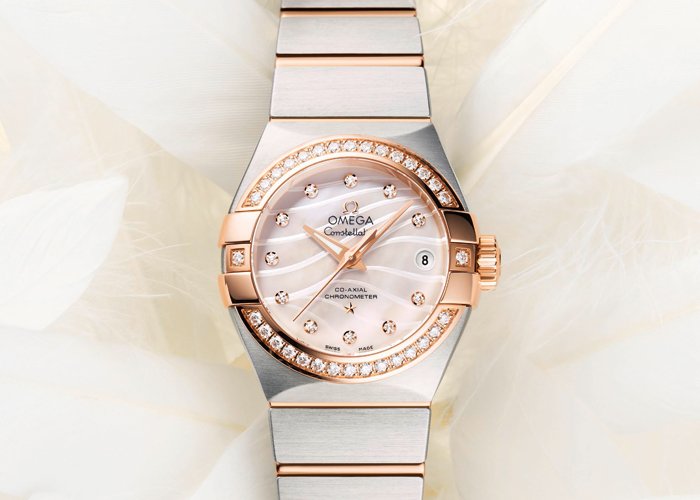 For the ladies, Omega offers a touch of refinement to its classic Constellation models. Also boasting a co-axial movement, the calibre 8520, the new Constellation “Pluma” models have a striking feather engraving on their mother-of-pearl dials that catches the reflections of the 11 diamond hour markers and diamond-studded bezel.

CLASSIC CRAFTSMANSHIP FROM THE PRESTIGE BRANDS

Omega is now grouped together with Blancpain, Breguet, Jaquet-Droz and the recently acquired Harry Winston in the Swatch Group’s internal classification of “Prestige and luxury brands”. But while the Bienne-based brand innovates using the latest technologies, the two brands from the Vallée de Joux, Blancpain and Breguet, continue to embody a classical elegance thanks to the use of traditional watchmaking crafts. 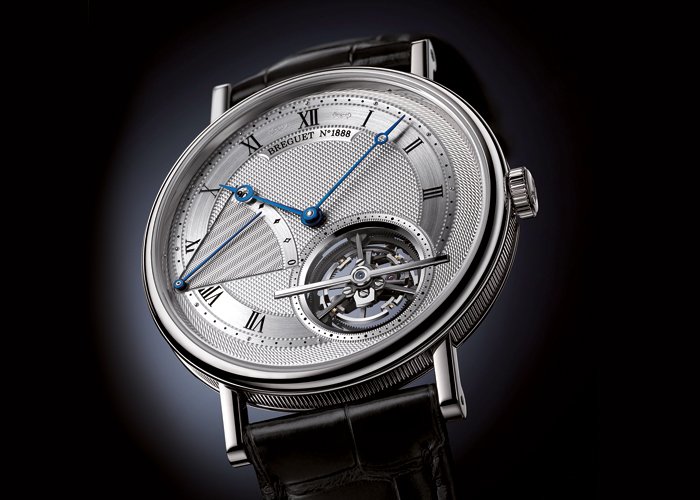 Breguet once again showcases its guilloché expertise in a new platinum version of its Classique “Grande Complication” Tourbillon. Four different types of engine turning are visible on the gold dial of this ultra-thin (7mm) piece, which is powered by the calibre 581DR, which has a silicon balance spring and a high-energy barrel that offers 90 hours of power reserve. A peripheral oscillating mass in platinum helps to keep the height of the movement down to a mere 3mm.

Blancpain opts for the timeless finish of a grand feu enamel dial in the wonderfully understated new three-hand model in its Villeret collection. In keeping with the traditions of the finest enamellers, subtle tone-on-tone “JB” engravings are found between 4 and 5 o’clock, as well as 7 and 8 o’clock, in a style that mimics the secret way enamellers used to sign their dials. This piece is powered by Blancpain’s in-house calibre 1335 self-winding movement, which offers an eight-day power reserve. Over in La Chaux-de-Fonds, Jaquet Droz has dreamed up a new version of the Grande Seconde SW model that was relaunched in a sportier guise back in 2008. The latest incarnation in this line adds a touch of technicality with Côtes de Genève decoration on the anthracite dial, and refinement, with a hand-finished anthracite grey leather strap. It is equipped with the Jaquet Droz 2663A-S self-winding movement, which has an 18-carat white-gold oscillating mass and twin mainspring barrels that offer a power reserve of 68 hours.

DESIGN AND TRADITION IN THE MID RANGE

Rado has developed a knack of producing consistently appealing designs using its exclusive high-tech plasma ceramic, as attested by some 30 different international design awards. In fact, the brand’s close links with the world of design will see it acting as the World Design PartnerTM for this year’s World Design Capital®, Cape Town in South Africa.

Rado’s latest design is another potential winner, offering a sublime dial in the new Hyperchrome Small Seconds models. Although it contains no trace of any metal whatsoever, the Hyperchrome’s case nevertheless generates a warm metallic reflection from the molecular transformation that occurs when the patented plasma ceramic is heated to 20,000 degrees Celsius. Three new models marry this plasma with subtle touches of yellow or red gold on the dial, while a fourth uses the more “traditional” matt black ceramic case with a discreet splash of red gold on the side of the case colour to match the indications on the dial. 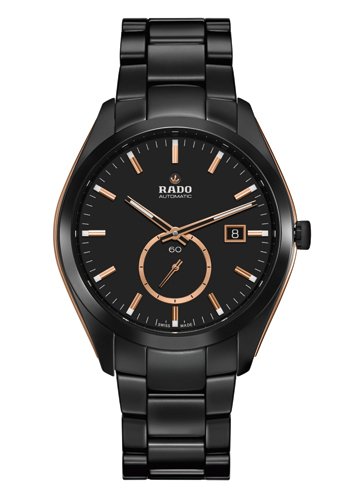 Longines harks back to one of its very first chronograph models ever produced for the latest model in its Heritage Collection. Three different versions of the brand’s monopusher column-wheel chronograph are available (in steel or rose gold) with classic white dials with black painted Arabic numerals. 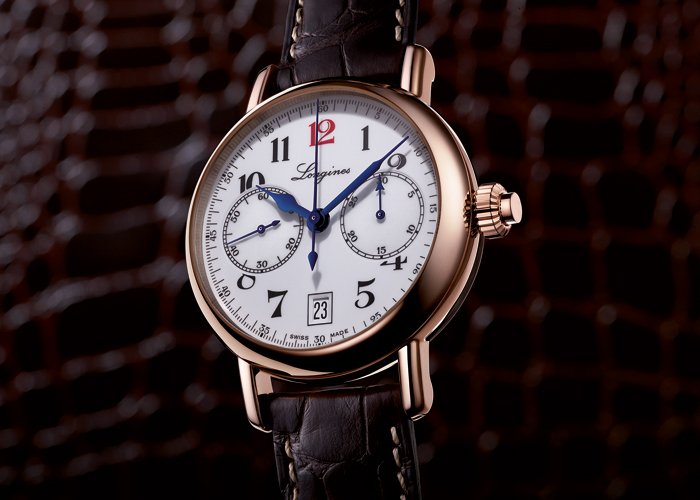 They are powered by the Longines L788 calibre, which has been developed especially for the brand by ETA. The self-winding monopusher chronograph movement is operated by a single pusher inserted into the crown at 3 o’clock, offers a power reserve of 54 hours and can be viewed through an exhibition case back. But the most striking feature of this timepiece is not the movement but the unique case of one of the three models, which has a thicker case with a more angular profile and movable lugs that offer exceptional comfort on the wrist. 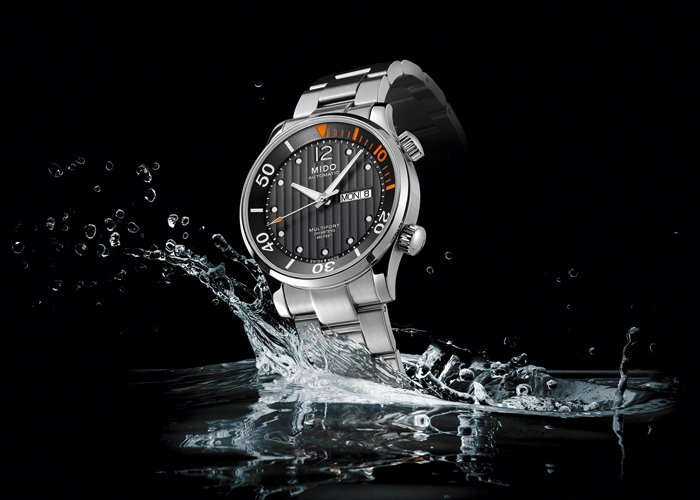 Mido also relies on one of its historical collections with a re-edition of the Multifort diver’s collection that was first launched in the 1930s. This 42mm stainless-steel model has two crowns: one at 2 o’clock for operating the rotating inner bezel for measuring dive times; the other at 4 o’clock for setting the time and date. Powered by the ETA 2836-2 calibre self-winding movement, which offers a power reserve of 38 hours, it is water resistant to 200 metres and comes with a stainless-steel bracelet that has a folding clasp that can be extended for wearing over a wetsuit.

Certina’s CEO André Bosshard last year told Europa Star that he thought that “the quartz segment still has some potential (…) and should not be neglected.” Less than a year later, towards the end of 2013, Certina launched its DS-2 Chronograph, powered by a quartz movement. 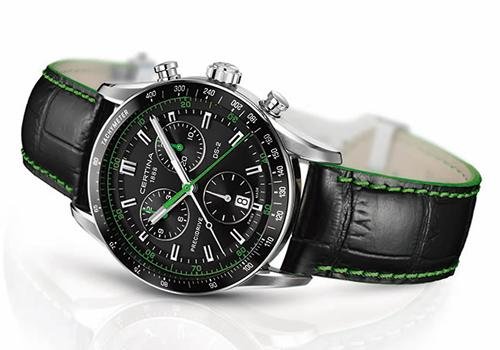 But it is not just any old quartz movement, it is the ETA Precidrive movement (ETA 251.264 CEN) that offers chronometer-level accuracy (provided, ETA remind us, “that the watch is not exposed to impacts, and kept at a temperature of between 20°C and 30°C”). This is because the precision is achieved by thermo-compensation, which controls and regulates the motor pulses according to changes in the ambient temperature. The DS-2 is perfectly capable of obtaining COSC certification, however, which is available with a limited series of 1,888 pieces. The standard models are available with a variety of dials and straps, including new yellow- and green-accented versions.

It is clear that with research and development covering fields that range from innovative new quartz movements right up to high-end calibres and cutting-edge materials and technology, the Swatch Group maintains its unique position as a leader at all levels in the watch industry. With the group’s main competitors operating either at the upper or lower ranges of this spectrum, there seems no reason for the group’s increase in sales and profits to slow down any time soon.