Europa Star set itself the challenge of trying out all the smartwatches introduced at Baselworld. This goal quickly proved to be too ambitious. There were many promises and announcements and some prototypes, but in the end very little that could actually be strapped to the wrist. This is only the beginning... 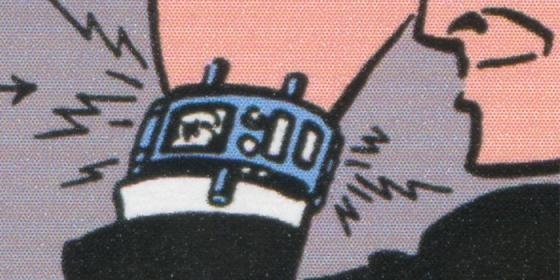 "TAG Heuer, Google, Intel” read the giant notice at the LVMH subsidiary’s booth. The tone of the year was set right at the entrance to Baselworld’s main hall: welcome to the wedding of Silicon Valley and Watch Valley. Malicious rumours – or, as far as the Swiss watch industry is concerned, pessimistic predictions – suggest that by next year the order will be “Google, TAG Heuer, Intel”, and the year after, “Google, Intel, TAG Heuer”. Beyond all the announcements, smartwatches are proving to be pretty elusive: there is not much to get one’s teeth into, or to put on one’s wrist. Jean-Claude Biver gave fair warning: “We are here to announce a partnership, not to show you a product.”

Despite the hype surrounding TAG Heuer’s announcement, it was not exclusive. Several months before, another industry giant, Texan-based Fossil Group, the world’s fourth-largest watchmaking group, and geographically closer to Silicon Valley, announced ties with the same firms. And this was confirmed at the group’s press conference. There too, there were no samples to try, and we had to be satisfied with an announcement. Nevertheless, it looks like Google, with its open operating system, unlike that of Apple, is setting itself up to be the new ‘ETA’ of the watchmaking industry version 3.0. And, if we want to stretch the metaphor to its logical conclusion, Intel could be the new Nivarox.

HOW CAN SALES STAFF BE TRAINED?

The terminology is still not yet clear: what exactly is the difference between a wearable, a smartwatch, a connected watch and a fitness tracker? The borders are still being disputed – it’s all still very new. At Fossil Group, for example, they like to speak of ‘connected accessories’ which, group insiders predict, will be the “next lever of growth”. In addition to Intel and Google, the American group has also entered into a partnership with hi-tech marketing company R/GA.

The group’s first brand to offer (non-Swiss made) smartwatches will be Fossil. “Models will be available this year and will offer a wide range of functions,” notes Preston Moxcey, Group Vice-President in charge of wearable technologies, who is sporting a prototype of a connected bracelet on one wrist and a mechanical watch on the other... Why this brand first? “All brands in our portfolio are curious about these new technologies, but this is the one that decided to jump in. The licensed brands are obviously keeping a close eye on developments.” Distribution chains are unlikely to change from today. Fossil Group’s brands are present in around 30,000 points of sale worldwide. “We will have to train our sales personnel in these new products.” Quite a challenge, then.

Another American fashion brand that is very enthusiastic about the connected world is none other than Guess (Timex Group). At the booth, President Cindy Livingston gave a personal demonstration of the Connect model – including a selfie – to this writer. Finally, something concrete! Readers may recall the letter of admiration Ms Livingston sent to Tim Cook after the Apple Watch launch. There are no signs of a partnership with Apple, but the Connect is compatible with iOS and Android via Bluetooth Low Energy. The winner of an award at the famous CES show in Las Vegas, the watch – inspired by the Rigor model – is driven by technology developed by Martian. Its main feature is the ability to give voice commands to the watch, for example to take a photo remotely. The watch can also receive a variety of notifications, which it displays on a small screen at 6 o’clock. 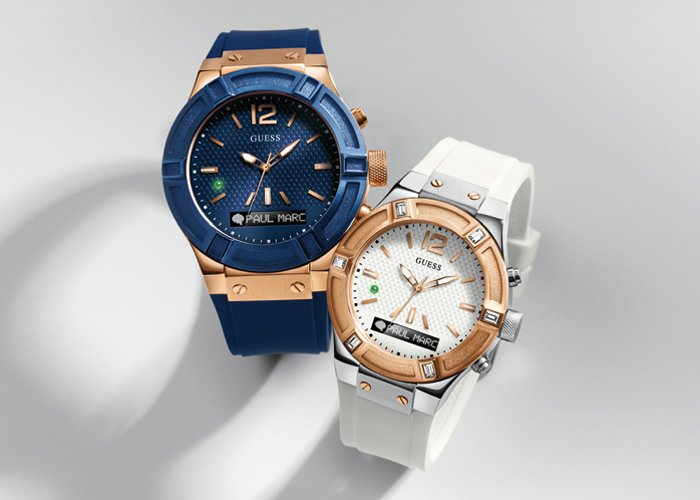 Joe Santana, former CEO of Timex Group, has also decided to invest in the smartwatch market with a new brand, Vector, which has launched a full-scale attack on the biggest challenge for connected watches: autonomy. Will it become a habit to charge our smartwatches every evening, as we do our smartphones? It’s a problem, particularly if the watch needs to remain on the wrist to monitor our sleeping habits... Joe Santana has devised an alternative: a connected watch with a battery life of a month or more! Of course, a number of sacrifices had to be made to achieve this, notably a black and white screen, which contrasts strongly with the colourful displays of Pebble and Apple. 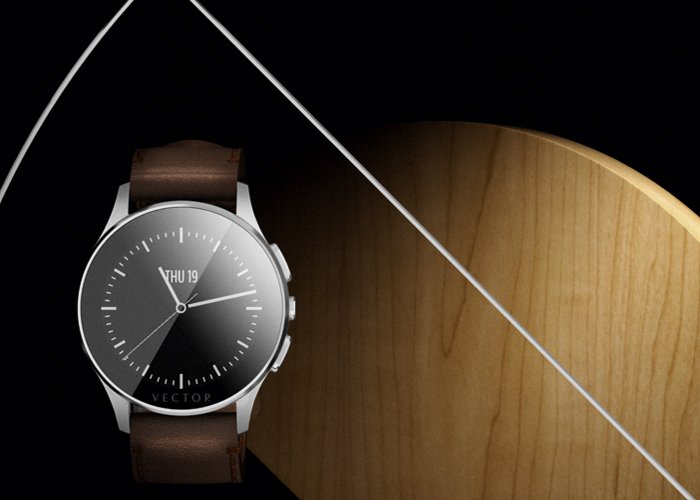 And yet here, too, it was good to have something to put on the wrist. The Vector is not targeted at young geeks but primarily at businessmen who don’t want to have to keep pulling their smartphones out of their pockets, and who can’t always be charging their smartwatch: people who just want to glance from time to time at their watch, with its stripped-down design, and receive simple and functional notifications.

“Customers don’t want a hamburger on their wrist!” exclaims Joe Santana. “We have not sacrificed design on the altar of technology.”

So, a round dial, unlike the Apple: “I don’t understand why they went for a rectangular watch, when 80% of watches sold around the world are round. It’s too much like a computer.” One thing is clear: the Apple Watch has already established itself as a benchmark for the other players in the sector.

Another feature of the Vector, also unlike Apple, is the minimal interaction with the watch. There is no touch screen, just three control buttons. A pragmatic, no-frills choice for a model that will be available from July at a price range of between USD 200 and 349 – or, in other words, between Pebble’s high-end models and Apple’s entry-level.

After this American appetiser, we continue to South Korea, already the most connected nation on the planet. Kairos (from the Ancient Greek for ‘supreme moment’) is making another bold bet: it is combining a mechanical watch with a connected watch. Clearly, the smartwatch is already engendering a proliferation of alternatives... Prices are, logically, higher (between USD 1,190 and 2,548) and power reserves lower (2.5 days) than for the Vector, but the system is an ingenious one and, here too, we had the opportunity to test the watch. And reassuringly, on standby, we have good old clockwork to rely upon! There are two models to choose from – a Miyota and a Soprod – and the brand began accepting pre-orders in June 2014. 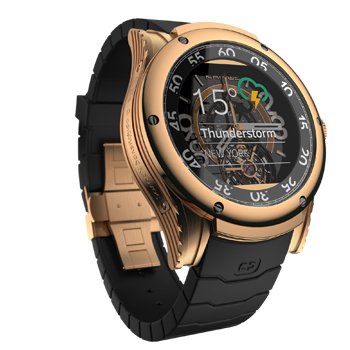 So, on standby, the watch is mechanical. But once a call is received, or when it connects to the smartphone to synchronise, a colour touch screen is superimposed over the watch dial. “We have already taken orders and made sales amounting to two million dollars since last year,” notes Joshua Wang, the brand’s communication director.

“The majority of these preorders are from Russia, Japan and even the United States. In Europe there is greater scepticism, in general, towards new connected products.”

In addition to its connected watch, Kairos also offers a connected bracelet that can be fitted to a mechanical watch, a little along the lines of the e-strap introduced by Montblanc at the SIHH earlier this year. This ‘T-band’ displays fitness tracking data and notifications directly on the strap, and it can also act as a simple sensor. The brand is currently seeking distribution partners: watch retailers for its watches and also electronics stores for its connected bracelets. “We are also ready to negotiate with other brands for our patented overlay display that is compatible with mechanical watches.”Attention all enthusiasts!

THE SWISS RETURN TO THE NEST

Back to Switzerland, and Mondaine. This brand, which for so long has been identified with Swiss railway watches, is currently turning to another Swiss icon: the Helvetica font. And it is precisely the model that the Bernheim brothers have chosen to connect, thanks to the MotionX system, initially developed by brands Frédérique Constant and Alpina with the assistance of Californian technology company Fullpower. Soprod is another behind-the-scenes collaborator, which has more influence in the smartwatch domain than one might think (see ES Première 3/15).

“At the end of January the CEO of Frédérique Constant, Peter Stas, contacted me about this project,” reveals André Bernheim, CEO of Mondaine. “My brother Ronnie and I then met up with him in Bern, and we immediately hit it off – all it took was a look! We remain loyal to our Helvetica line and the Swiss made label, while giving it a ‘smart’ touch.” He is keen to point out: “All the other Swiss brands are talking about concepts. We already have a smartwatch, which at the same time heritage.”

The Mondaine Helvetica No.1 Horological Smartwatch will focus on fitness applications – activity and sleep tracking – with specific goals to be met. It will be available in the autumn for CHF 850 (compared with CHF 300–500 for the ‘standard’ model). Like the Frédérique Constant and Alpina models (see ES Première 2/15), at first glance the screen gives nothing of its smart capabilities away. It’s a very discreet, very Swiss way of tackling the smartwatch. 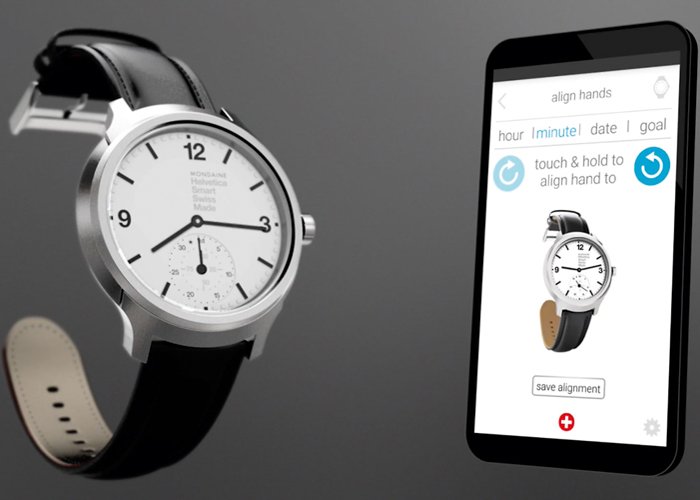 Equally Swiss and very discreet is the Bulgari vault model (see interview with Jean-Christophe Babin). This is also a prototype, however. Breitling has also presented its smartwatch (see Malcolm Lakin’s article). We will also be hearing a lot more from Swatch Group. From the announcement of the Swatch smartwatch designed for beach volleyball, and that of Tissot (see interview with François Thiébaud on this topic in ES 6/14), the Biel behemoth appears in the first instance to be focusing on specific applications rather than on a global range. Of course, the group has some serious advantages, such as electronic circuitry specialist EM Marin. But will it be able to go it alone, without partnering with Silicon Valley? The race is on. And the paths to success, and the possible deviations, are many.