MARKET - Swiss or German watches: which is best?


MARKET - Swiss or German watches: which is best?

When the Berlin Wall came down on November 9th, 1989, very few people could have envisioned the fascinating comeback of German high-end watchmaking. Yet, only one year and a few days after that historic and dramatic moment, on December 7th, 1990, Walter Lange registered the company Lange Uhren GmbH again – exactly 145 years after its founding and 49 years after the brand had disappeared in socialist East Germany. Since then towns like Glashütte in Saxony and Schramberg in the Black Forest have once again become globally acknowledged and respected for producing fascinating timepieces, to the extent that worldwide experts and collectors are sometimes led to ask: who are the best – the Swiss or the Germans? 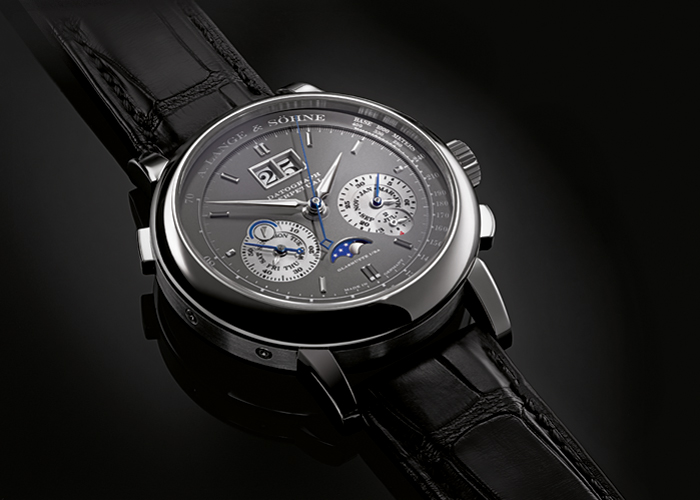 One way of answering this intriguing yet sensitive question is to compare both countries in relation to three topics: historical contribution and mutual influences, market relevance and watchmaking abilities.In the 17th century, immigrating Huguenots brought their horological expertise with them, causing Switzerland to evolve into the global epicentre of watchmaking it undoubtedly is today. Given the nation’s lofty reputation and capabilities, gifted watchmakers from all over Europe would travel around the Confederation to gain experience and knowledge. One such was the young German Ferdinand Adolph Lange (the great-grandfather of today’s Walter Lange) who arrived in 1841. Lange was particularly impressed by how Switzerland had used watchmaking to further the economic development of some very remote and impoverished regions – an example that would prompt him to set up his own workshops in poverty-stricken Glashütte. Over time Switzerland would become a significant supplier of watches, movements and components to Germany, even during the World Wars. The incredible resurgence of the watchmaking industry in Germany, and particularly in Saxony, over the last two decades would have been unthinkable without the support of the Swiss watch industry. The reborn A. Lange & Söhne received considerable funding and enormous entrepreneurial industrial assistance from IWC and Jaeger-LeCoultre; until 2000 all three brands belonged to the Schaffhausen-based holding company LMH Les Manufactures Horlogères. Before it so successfully built up its own in-house industrial capabilities Nomos, for example, for many years sourced standard movements from ETA, and various other German brands still do so in considerable numbers. Glashütte Original’s successful internationalisation since 2001 would certainly not have been possible without the considerable resources of its mother company, the Swatch Group. And Swatch Group once again came to its aid in 2008 with gracious financial donations and logistical advice, to make the reopening of Glashütte’s watch museum possible. 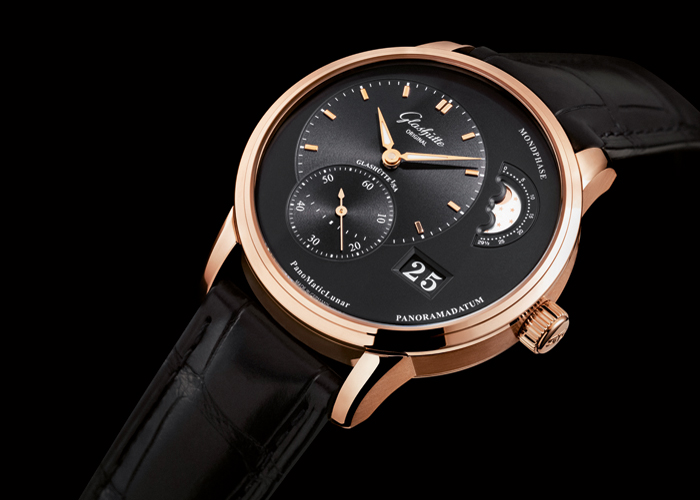 PanoMaticLunar by Glasshütte Original
The Pano models from Glashütte Original give prominence to the clear, pure design with its off-centre placement of hour and minute hands and small seconds display. This is evident from a first glance at the PanoMaticLunar models, which present the characteristic off-centre displays in a well-thought-out spatial arrangement. The areas for hour/minute indicators and the small seconds display lie on a vertical axis within the left half of the dial. The placement of the individual displays was inspired by the Golden Ratio – the legendary law of aesthetic harmony.

And yet it would be short-sighted to think that Swiss influence on German watchmaking was a one-way street. Looking at the horological contributions of both countries, Germany made the first impact. Although some doubts exist about the achievements of Peter Henlein of Nuremberg (1479-1542), he is often considered the inventor of the world’s first pocket watch. It was Ferdinand Lange who, centuries later, introduced the metric system into international watchmaking. And Glashütte Original’s brand name traces its roots back to the early 20th century, when the local industry had to protect itself from Swiss fakes and their so-called ‘Glashütte system’ – Swiss imitations of what were for those days very precise ¾-plate based movements from Saxony. Around the same time, just after World War I, Switzerland embargoed all component deliveries to Germany. This fortuitously encouraged efforts to build up more independent industrial watchmaking structures, resulting in the creation of such highly competitive companies as Ufag and Urofa. For more than a decade – from 1932 to 1945 – Reinhard Straumann paid royalties to A. Lange & Söhne for the right to use a patent on a particular metal alloy that would later become the basis of the Swiss success of accurate modern timekeeping: the Nivarox balance spring. Germans were instrumental in founding or developing Swiss watch brand icons like Rolex and Chopard, and outstanding entrepreneurs like Günther Blümlein, who played a major role in this renaissance, had an immense impact on the industry’s prosperity. Obviously, and to give credit where it is due, Switzerland has historically contributed much more to the global success of watchmaking than Germany has, but its success was based on the achievements of the English and French geniuses that came before, and has always been influenced by external factors, like Japanese quartz or – now coming over the horizon – American smartwatches.

A glance at the second topic of comparison in our quest to answer the ‘who is best’ riddle reveals again a dominant, yet not exclusive Swiss presence in terms of economic market relevance. In 2014 the Confederation’s exports amounted to CHF 20.9 billon, CHF 13.8 billion of which represents watches with an export value of over CHF 3,000. Exports to Germany accounted for CHF 1 billion. German global exports, on the other hand, reached EUR 1.7 billion in the same year or, on the basis of pre-January 2015 exchange rates, roughly 10% of the Swiss export value. In the 1950s and ’60s brands like Junghans and Kienzle were among the biggest in the world. In the ’70s they made a technical contribution to the quartz revolution – even Glashütte Original in the former East Germany developed and produced its own electronic movements up to the 1990s. Today, as a producing country, Germany exports dials, straps, cases, movement blanks, components and high-precision machinery like CNC routers to a number of nations including Switzerland. In total, some 50 German brands supply watchmakers at all price and quality levels – again a relatively small number in comparison to the more than 1,000 Swiss brands. However, when it comes to the very heart of the question about which is the leading country, historical and economic considerations are obviously far less important than consideration of the timepieces themselves, and their manufacture. The introduction of A. Lange & Söhne’s Datograph in 1999 marked a major shift, lifting Germany’s watchmaking to the Swiss level of complete mastery. Since then, German innovation and creativity have repeatedly astonished the public. Lange, Glashütte Original, Nomos, Moritz Grossmann, Lang & Heyne, Lehmann and others all offer collectors high-class timepieces with movements developed, manufactured, finished and assembled in-house. Today, among the top ‘semi-industrial’ manufacturers of high-end watches – those who produce more than 3,000 pieces a year – A. Lange & Söhne probably realises the highest average retail price per piece sold, worldwide. Brands like Glashütte Original can look back on more than 165 years of genuinely uninterrupted and almost complete industrial autonomy. The company offers exciting timepieces such as the Grande Cosmopolite, 90% of whose internal components are manufactured in-house. In terms of finishing, German watches are able to offer the finest execution of anglage, blueing screws and polishing the tiniest gold châtons.So who is best? Is German watchmaking really a genuine challenger to the likes of Patek Philippe, Breguet, Vacheron Constantin or their modern counterparts Urwerk, Claret or MB&F? An A. Lange & Söhne advertisement once archly proclaimed: “The Swiss manufacture the best watches in the world – the Saxons, too!” 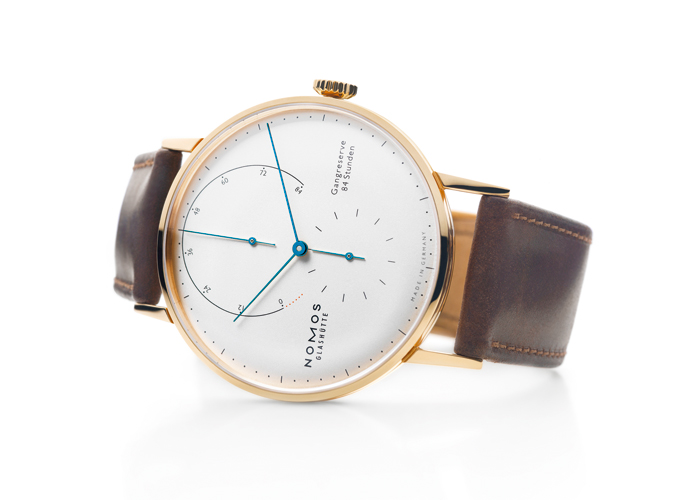 But the point of asking ‘who is best’ is not to provide an answer but to provoke thought. By offering an alternative, German luxury watchmaking gives customers around the world more choice. Moreover, since its comeback it has undoubtedly stimulated the Swiss industry to push the envelope further. And this has been a crucial factor at a time when the European watch industry is facing new challenges: changing global consumer patterns among young people, who are apparently less interested in classical timepieces than in the smartwatches of the new market players – if they care at all! The internet is creating different, complex and as yet incompletely understood market structures. The phenomenon of concentration at all market levels – suppliers, manufacturers, brands, distributors and retailers – may reduce the industry’s historical liveliness – as it has in the huge but increasingly boring car industry. And who knows, perhaps one day Chinese customers will be able to buy home-produced top-end timepieces rather than foreign imports?Consumers can only spend their money once and there are more items to purchase than just expensive watches – as incredibly beautiful and astonishingly innovative as they may be. Ferdinand Adolph Lange, an unknown engineer, was allowed to learn his trade in France, England and Switzerland from open-minded geniuses. On his return to Germany he began his entrepreneurial endeavour to develop a revolutionary movement by inviting competitors Aßmann, Grossmann and Schneider to join forces to create a critical mass of production capacity that would justify the build-up of a local supply industry in the small town of Glashütte. Today, consumers may follow their individual inclinations regardless of the brand’s origin. For industry decision-makers the question is not Swiss or German; the answer, however, is undoubtedly – European!

TIME.BUSINESS This year, the German town of Glashütte celebrates 175 years of watchmaking history. And while A. Lange & Söhne and Glashütte Original are its traditional (...)

Junghans presents the “FORM A Titan”

TIME.KEEPER The FORM A Titan (Titanium) from Junghans embodies stylish practicality with a fo-cus on functionality. An emphatic design for an active (...)