Once a pioneer, yet now decidedly run-of-the- mill, the quartz movement is approaching a crucial point in its history. With mechanical watches becoming less and less expensive, and with the arrival of functionally superior smartwatches, quartz is feeling the pressure on all sides. Will it still be around tomorrow?

Once a pioneer, yet now decidedly run-of-the- mill, the quartz movement is approaching a crucial point in its history. With mechanical watches becoming less and less expensive, and with the arrival of functionally superior smartwatches, quartz is feeling the pressure on all sides. Will it still be around tomorrow?
A

ccurate, reliable, durable: quartz once represented the future of the watch. But electronic movements regulated by a quartz crystal (known as quartz movements) have become so runof- the-mill that they are now ubiquitous. Capable of almost everything, the quartz movement has been left to its own devices. The reputation of quartz today is not unlike that of freeze-dried food: inexpensive and effective, but artificial, bland, and generic. And to open up a watch to find a plastic casing-ring and a little battery lost in the middle is a terribly sad sight. Ironically, after having come close to forcing the mechanical movement into retirement, the quartz movement itself is now at risk of losing its functional and economic relevance.

Quartz is like a sachet of freeze-dried food: inexpensive and effective, but artificial and generic. 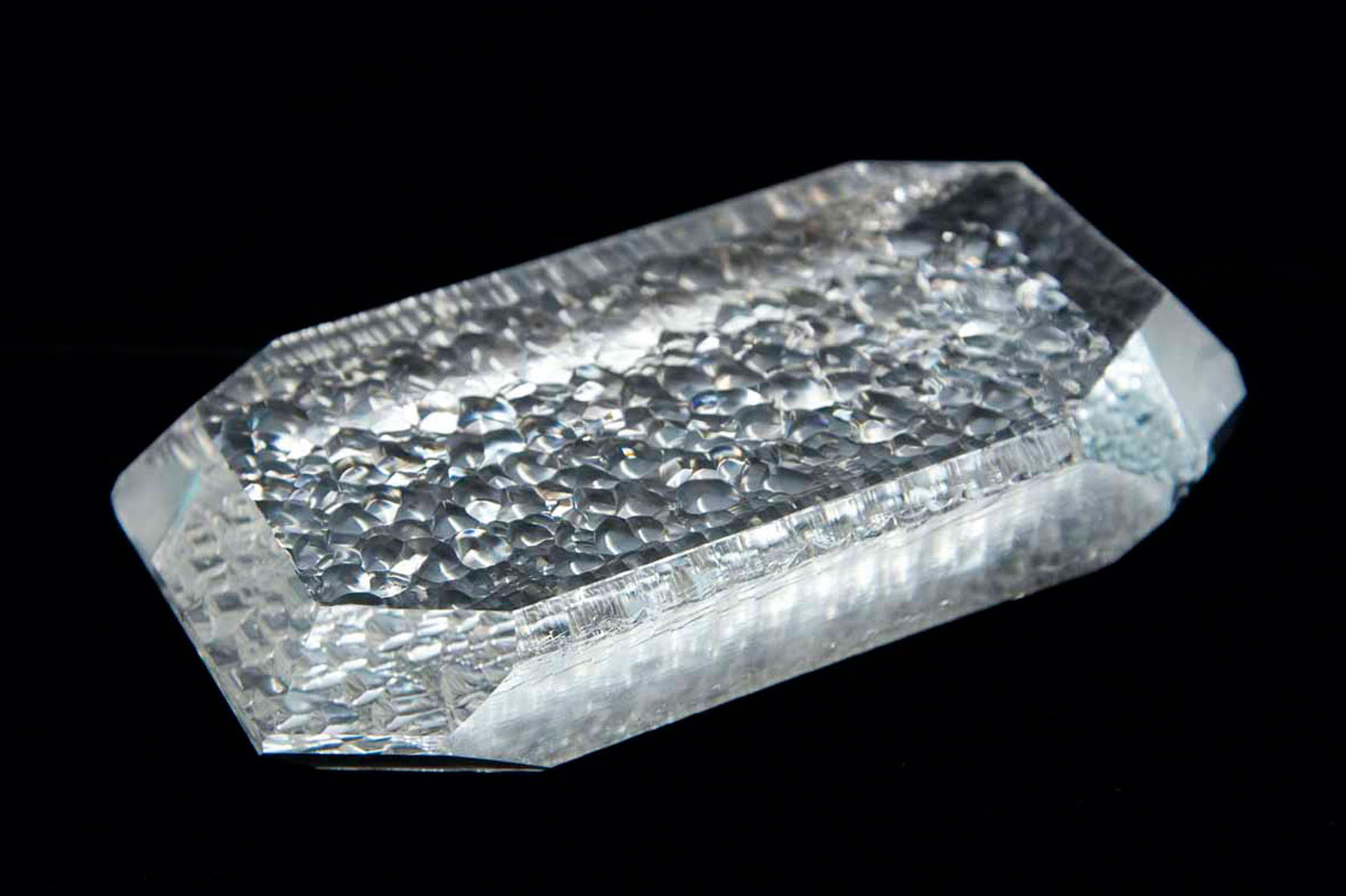 A raw quartz crystal, produced in a Seiko autoclave, which will then be shaped into little slivers.

In 1969, after decades of miniaturisation, the collective initiative of the Beta 21 movement in Switzerland, and Seiko’s Astron, finally succeeded in developing a quartz movement to fit the wrist. They had managed to switch from a mechanical to an electronic approach. Soldering replaced screws, and batteries replaced barrels. Increasingly energy-efficient, the movements were produced via a process of industrial, automatic, and bulk manufacturing. Now, an assembly workshop for quartz movements is composed of a long, automated production line. A few rare humans push around trolleys with the tools they need for quality control and maintenance. With barely any moving parts, lubrication, or wheels, the watch becomes shock-proof and is unaffected by ageing oils. Finally, quartz’s biggest strength is usually kept under wraps by the world of mechanical watchmaking.

A COSC quartz chronometer is accurate to within 25 seconds per year. That’s 85 times better than its mechanical counterpart.

Quartz movements are impressively accurate, once protected against variations in temperature, which strongly affects them. The COSC criteria provide a clear scale of the quartz movement’s abilities. A mechanical chronometer must be accurate to within 3 minutes per month. Accuracy for a quartz chronometer, meanwhile, should be within 25 seconds per year, which is 85 times more accurate than a mechanical watch. We’re even seeing a return to high precision. With the release of the Conquest V.H.P, Longines is reviving the 1980s, when a model of the same name offered the same level of precision, accurate to 5 seconds per year. British company Hoptroff has miniaturised an atomic clock for the wrist: accurate to one second per thousand years. And if that’s still too much, various radio-controlled watches (from Junghans in particular) receive DCF77 signals in Europe and WWV signals in the United States. They are hooked up to atomic clocks, which are accurate to one second per million years.

The Longines Conquest V.H.P: accurate to 5 seconds a year,
perpetual date, hands are re-synchronised after an impact.

Junghans created the first radio-controlled wristwatch in 1990.
The Force Mega Solar is its successor.

Another of quartz’s strengths: it is battery-powered. Progress in battery technology means that a watch can now run for five years before switching to standby for fifteen years, or never stopping at all if equipped with solar panels, which have long been transparent and ultra-thin. The result of all of these benefits is total domination. The quartz movement is fitted in 95% of watches, and 72% of Swiss exports. As an object, the mechanical watch is an anomaly, almost a technological aberration. As if every car in the world were electric and yet a small minority still chose a steam engine despite all opposition. But we know that mechanical watchmaking is based on things beyond the reasonable.

Today, quartz has come face-to-face with its spiritual son, the smartwatch, which could soon kill the father. Through touchscreens, the addition of connected modules, and lowenergy processors developed by the field of telephony, electronic movements have fundamentally changed. The speed with which the smartwatch burst onto the watchmaking scene, like a bull in a china shop, is unprecedented. In the space of three years, the quartz watch has become outdated. Connected, upgradeable, and interactive, the smartwatch is a micro-computer for your wrist, complete with a touch screen, integrating a quartz master clock among its thousands of electronic elements. The quartz watch, meanwhile, cannot update itself. Some smartwatch manufacturers have even bet on the disappearance of the quartz movement for all but the most basic watches. Because the smartwatch is in a whole different category. As Moore’s law predicts, costs decrease as quickly as performance increases. Already, an Android Wear touchscreen smartwatch starts at around 100 CHF. Already, ETA, Ronda, and IsaSwiss are competing with Intel, Samsung and Google, whose quarterly profits are close to a year’s worth of Swatch Group’s annual turnover. Already, the Swatch Sistem 51 is on sale for 150 CHF, for an automatic Swiss-made watch, though it is disposable and 80% plastic. 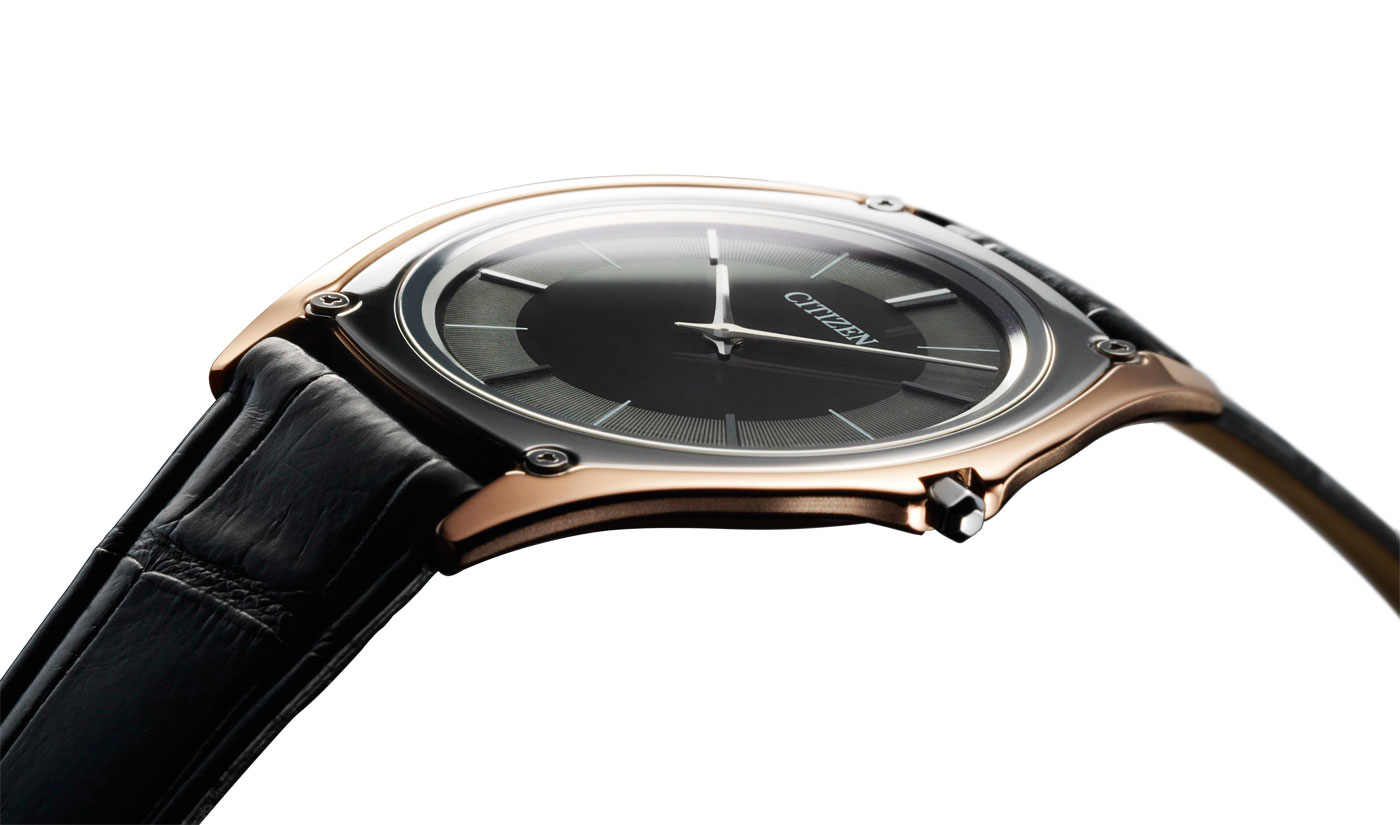 2.98 mm thick thanks to its 1 mm movement,
the Citizen Eco-Drive One’s thinness is limited by the solidity of its metal case.

Quartz technology still has some applications in the luxury segment and there are some brands working to develop it further, but these opportunities are rare, and above all, dwindling. The progress made by Citizen in the area of extreme thinness, with its 2.98 mm Eco-Drive One, is restricted by the physical limits of the case, as in mechanical watchmaking. Can the ergonomic research implemented in Bulova’s Curv Chronograph Watch, with its curved movement and case, move beyond the anecdotal? It hardly matters that it has a frequency of 262 KHz, 8 times the standard frequency set by Girard-Perregaux for this technology. As a matter of fact, the biggest Swiss watchmakers have joined in the adventure, and continue to do so. Patek Philippe applies the same finishing to its two inhouse quartz calibres, which are still used in about 25% of production, as used on its other calibres. On the whole, quartz chronometers make up a quarter of Breitling’s production. Even François-Paul Journe has turned its hand to quartz. The champion of classic watchmaking, positioned as a spiritual heir of Berthoud and Breguet, has launched Elegante, a battery-powered watch, and not just for ladies. 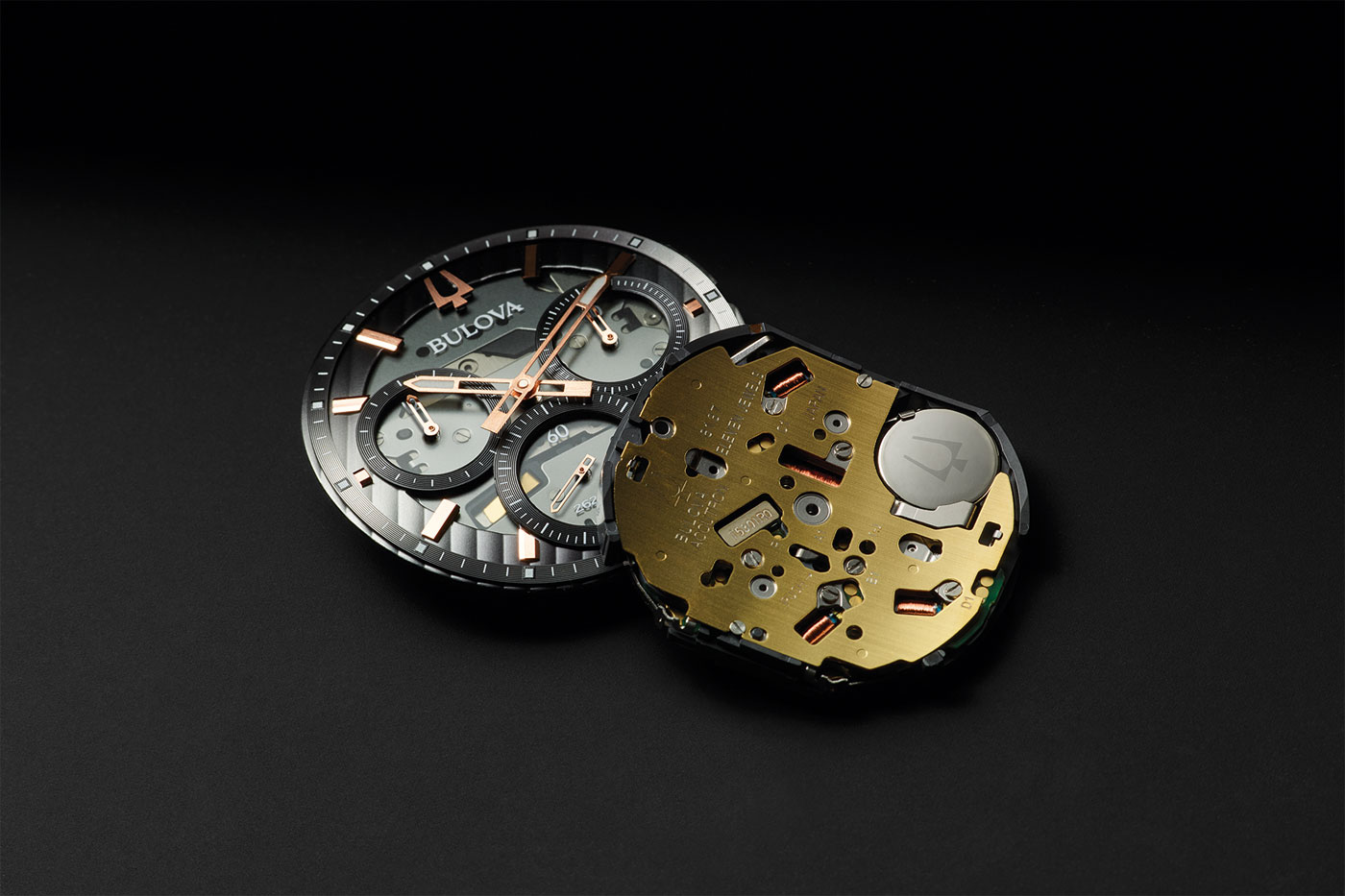 The curved movement of the Bulova Curv Chronograph.

For a while now, hybrid watches have been making their mark. Following the incorporation of rechargeable kinetic batteries (Seiko’s Kinetic, 1988), Audemars Piguet and Jaeger- LeCoultre’s quartz movements with chronograph modules (1980s), and the emergence of Seiko’s Spring Drive in 2004, quartz has once again adapted to pair itself with gears. In Piaget’s Emperador Coussin XL 700P, a generator/quartz regulating organ powers a mechanical calibre, for over 70,000 CHF. Seiko continues to innovate with its calibre 9F, featuring ultra-high precision micro-motors. Casio is developing expensive limited editions of its G-Shock, putting Japanese metallurgical expertise in the spotlight. But look beyond these Japanese initiatives, produced by a country that has built its entire watchmaking industry on this technology, and quartz technology has plateaued. Even the multi-function and touchscreen T-Touch dates back to 1999. 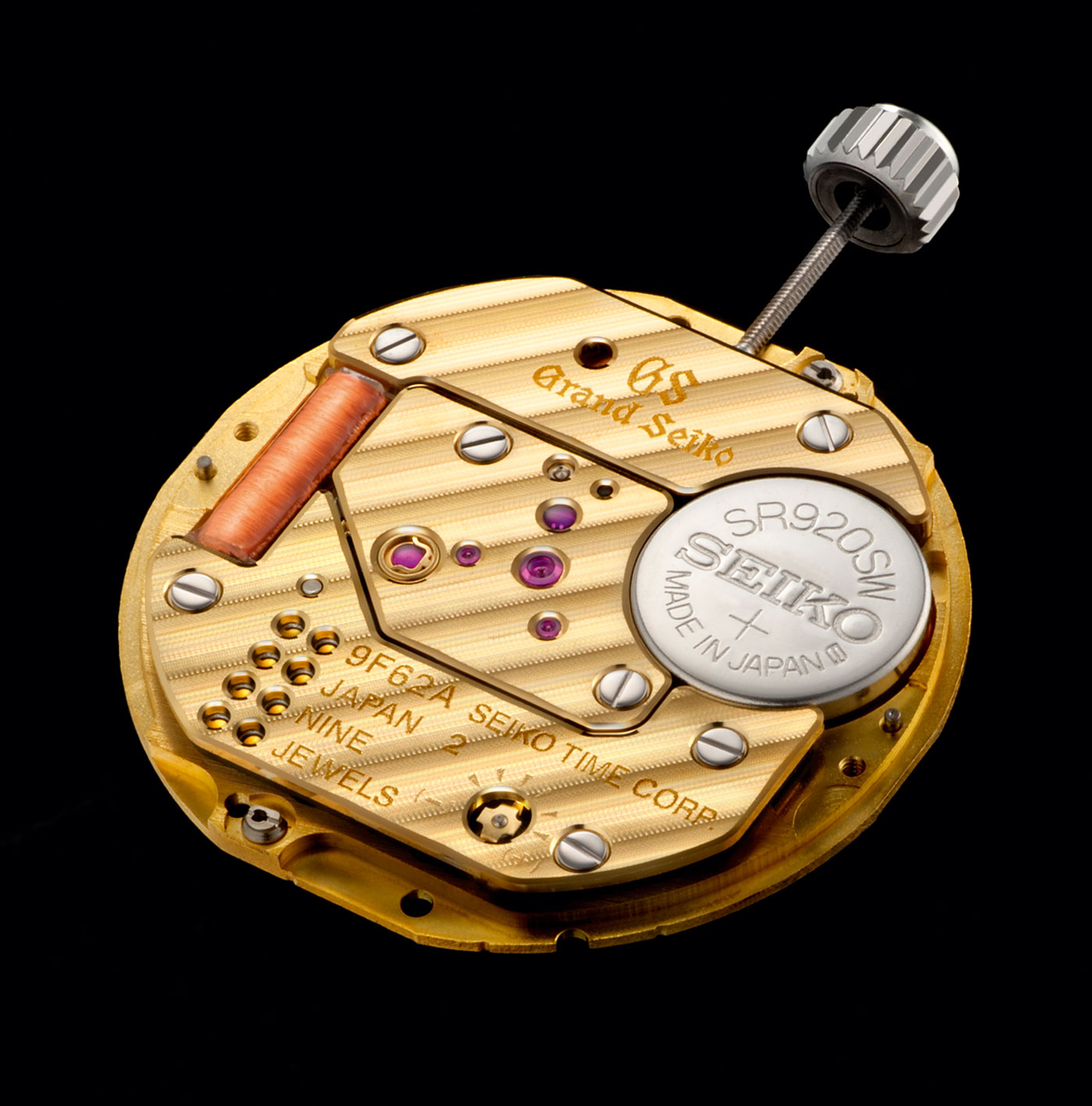 The calibre Seiko 9F62, one of the few to represent true technological,
yet limited, progress. 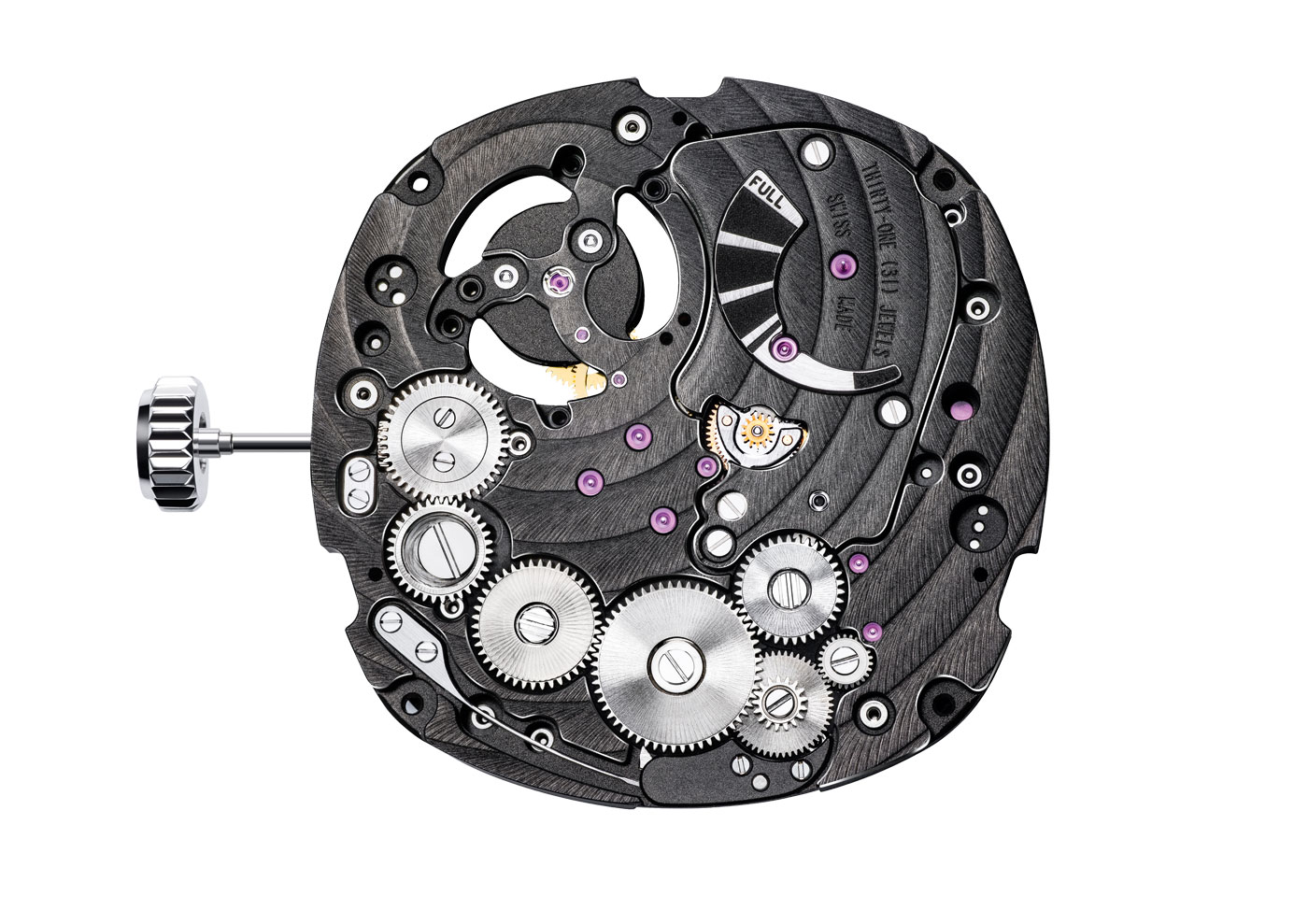 Piaget’s calibre 700P,
the latest example of what a mechanical-quartz hybrid can achieve, but at a steep price.

Caught between a rock, smartwatches, and a hard place, low-cost mechanical movements, the pressure on quartz could yet prove fatal. Because in 5 to 10 years, it may well face a struggle to prove its very relevance. What purpose will it serve beyond the most economical of uses? The options seem scarce. The functional one-upmanship within the market is so fierce that quartz must do better than an ultra-thin, solar-powered, back-lit watch automatically regulated via satellite, with a ten-year warranty and battery life. Because this type of watch is already on the horizon. 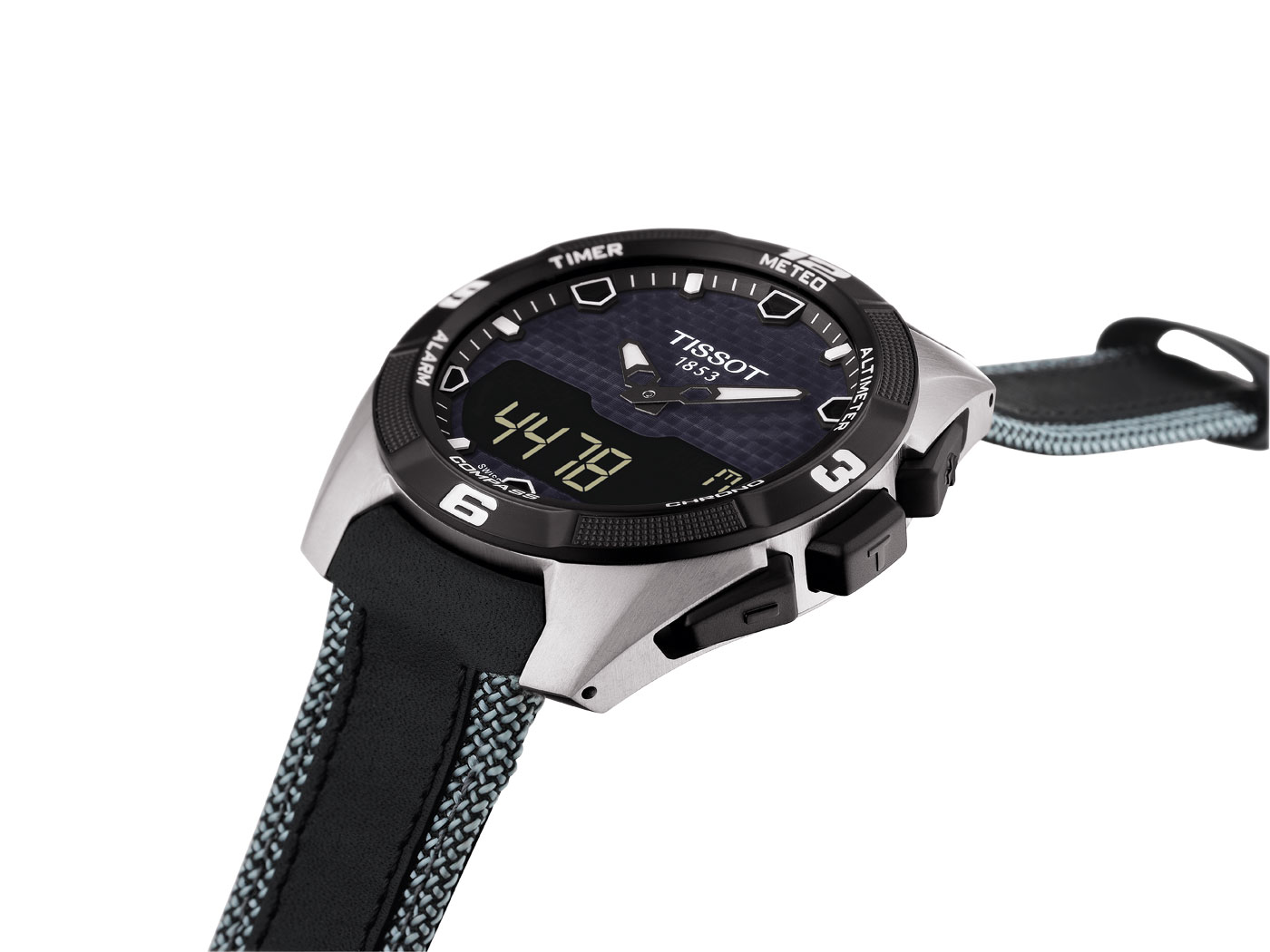 The Tissot T-Touch Expert Solar is solar-powered,
but the model invented the multi-function touchscreen back in 1999.

QUARTZ – HOW DOES IT WORK?

In 1880, the Curie brothers discovered that some materials vibrate when an electric current is passed through them, a phenomenon known as piezoelectricity. Quartz crystal, which is a silicon dioxide, provides the best stability/machinability/price ratio for timekeeping. The current standard frequency for these vibrations in 32,768 Hz. They are counted by a processor, which acts as a master clock. The processor then proceeds to divide this frequency to derive the second. In the case of analogue watches, a system of micro-motors operates the hands, powered by the same battery that makes the crystal vibrate. 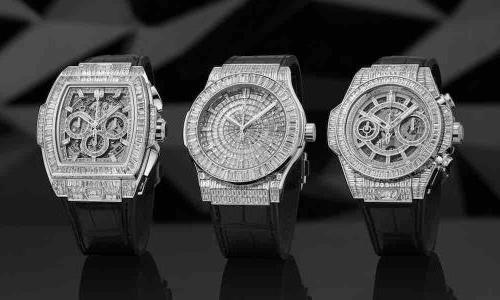 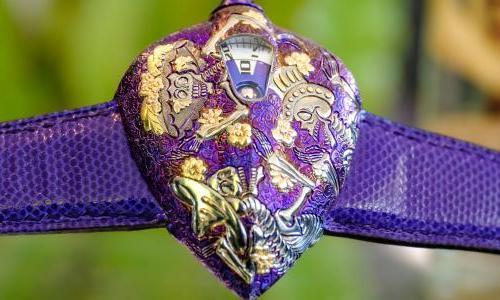