The Cultural Strategy of Richemont in China


The Richemont Group has organized a prestigious cultural and historical exhibition in Beijing, a strategic prelude to the distribution of its brands in the remarkable Chinese market.

The Cultural Strategy of Richemont in China 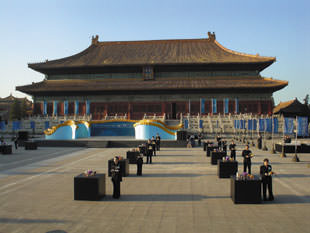 The Richemont Group has organized a prestigious cultural and historical exhibition in Beijing, a strategic prelude to the distribution of its brands in the remarkable Chinese market.

The Chinese market may be thought of from now on as the Eldorado of all types of brands, especially the luxury brands. According to a study by CapGemini-Merrill Lynch for the year 2003, China had more than 236,000 millionaires (those with more than US$ 1 million in cash), an increase of 12 per cent in relation to 2002. Some 50,000 people had assets of more than US$ 10 million. Over the US$ 100 million mark, China can count about 200 people. According to estimates, between three and five million consumers in this vast nation could purchase luxury products ‘tomorrow morning.’
Given this situation, it is not hard to imagine why the prestige watch brands would want to compete for a choice spot in this market and build a solid identity and reputation among Chinese consumers. A leisurely stroll down the central shopping street in Beijing makes you realize that most of these brands have already opened or are opening boutiques in the white marble luxury shopping malls that are sprouting up like mushrooms near the ‘hutongs’ – a section of historic but poor streets in old Beijing.
Some Swiss brands, and not the least important ones, are already strongly implanted in China. Among them are Rolex, of course, and the Swatch Group, especially its brands Omega, Rado and Longines.

The opening ceremony and inside the temple


The large brands’ strategies for entering this gigantic market vary. While an Omega, for example, targets the ‘masses’ by installing an impressive clock on Tienanmen Square, that counts down the days until the 2008 Olympic Games in the Chinese capital, the Haute Horlogerie brands under the Richemont banner are choosing a more elitist approach. The first example in their strategy is an exhibition called ‘Watches & Wonders’ that recently took place in the nation’s capital.
Richemont’s strategy is interesting and well-conceived. It uses culture and tradition in a step-by-step approach to establishing a specific and prestigious image for its brands in China. Franco Cologni, Senior Executive Director of the group and organizer of this exhibition, explains: “The strategy of the Richemont Group is not to impose but rather to persuade, to convince. We have no desire to conquer but rather to create and stimulate an exchange of knowledge and experience. Our goal is to promote the harmonious growth of our brands in China in the spirit of entente cordiale with all the players in the marketplace, beginning with the Chinese luxury retailers. We want to work together with them.”
In order to make a spectacular first impression and mark the beginning of this specific approach, Richemont decided on a prestigious cultural and historical presentation, instead of simply organizing the usual social events in a lobby of one or another of the major hotels in the city. No less than a year of lengthy discussions and negotiations were necessary to convince the Chinese authorities to let the group use an exceptional site for its event: the Tai Miao temple, constructed in 1420 within the confines of the fabulous Forbidden City, the ancient residence of the Middle Kingdom’s emperors. The last descendent of the imperial family, the brother of Pu Yi, the last Chinese emperor, was entrusted with the calligraphy for the exhibition, which the group entitled ‘Watches & Wonders.’
The heart of this cultural and historical display, which included 600 pieces in total, was a pres-entation describing the history of Western mechanical watchmaking, from its origins at the end of the Middle Ages to today. The first steps of this mechanical art, which fascinated the Chinese so much when the first missionaries arrived with their small clocks, were described using magnificent pieces on loan from the Beyer Museum in Zürich. Each of Richemont’s ten brands that participated in the exhibition, illustrated their own evolutionary journeys in timekeeping, beginning in 1755 with the birth of Vacheron Constantin.
This historical voyage into time also included a detailed presentation of the various artistic métiers that come together to create a fine watch. Two watchmakers - a master and a specialist in grand complications – along with an enameller and a stone setter demonstrated their art directly to the public.
The walls of the extraordinary main room of the temple were divided into ten spaces dedicated to the brands, each providing examples of watches that have marked its history as well as its current production. (In alphabetical order, the brands were A. Lange & Söhne, Baume & Mercier, Cartier, Dunhill, IWC, Jaeger-LeCoultre, Montblanc, Panerai, Piaget, and Vacheron & Constantin.) At the rear of the first temple, separated by an interior courtyard, a second temple allowed the brands to receive visitors and guests in a more private setting.
What reaction can the Richemont group hope for from such an eventı It is too soon to say for sure, especially since the group does not expect any immediate concrete results. The aim is to anchor the identity of the various brands in the collective consciousness of the Chinese ‘decision makers’ and, after that, it is up to the brands to take action on their own. Franco Cologni insists upon this point: “This type of operation is unique and Richemont, as a group, does not have to make itself known. It is up to the brands to move to the front lines, with the help of the cultural artillery that we have just given them.”

We return in detail to the Chinese market
in the Market Focus of our next issue,
Europa Star 6.04.