At Europa Star, for our Basel issue coverage, we typically profile individual brands on their own. However, at the show, you can’t miss the Swatch Group pavilion smack in the centre of prestigious Hall 1. So, we decided to take a different approach with the Swatch Group and take a look at the group as a whole, then get a peek at what the individual brands inside the group have to offer at BaselWorld.

The Group
The Swatch Group is one of the biggest and most successful organizations in the watchmaking industry. Early on, its late founder Nicolas Hayek Sr. was largely responsible for rescuing the Swiss watch industry from oblivion. Hayek then led the group to domination in Switzerland and around the world. Some of the industry’s best brands are in the Swatch Group – Blancpain, Breguet and Omega – and some of the most successful brands in the world call the group home – brands like Tissot, Hamilton and Rado.
Despite the lingering effects of the crisis, the Swatch Group posted record gross sales in 2010 (CHF 6,440 million), a record CHF 1 436 million operating profit and a net income of CHF 1 080 million, representing an increase of 41.5% on 2009 and of 6.4% on the record year of 2007.
As for 2011 and beyond, here is what the group had to say in its most recent reporting: “The strong uptrend seen in 2010 was confirmed again in January 2011,” says the report. “The current outlook for 2011 appears positive, despite the unfavourable currency constellation at present, particularly the US Dollar and the Euro against the Swiss Franc. The Board of Directors and Executive Group Management Board of the Swatch Group will continue to pursue a clear and healthy organic growth strategy in this very positive environment, with the objective of achieving sales of ten billion Swiss Francs in the medium term.
“Thanks to very motivated employees, the strong geographic presence of the brands in all of the world’s major markets and its comprehensive coverage of all market price segments, the Group is optimally placed to achieve this goal,” the report continues. “In addition, further investments in research and development will generate innovations and products, which can be introduced to the public on an ongoing basis, some as soon as this year’s trade fair in Basel. To ensure the continuation of the Group’s sustainable growth, further targeted investments will be made in the already comprehensive and efficient distribution network and, as already mentioned, in the expansion of production capacities. Thanks to its very solid starting point as regards equity and liquidity, the Group will be able to exploit interesting opportunities to increase its market share and presence.”

The brands
The Swatch Group has the following brands under its umbrella — Blancpain, Breguet, Jaquet Droz, Léon Hatot, Glashütte Original, Union Glashütte, Tiffany, Omega, Longines, Hamilton, Tissot, Calvin Klein, Swatch, Mido, Balmain, Flik Flak and Certina) - all with a specific niche in price and product, with the caveat that they can do just about anything except directly compete with other Swatch Group brands. Sure, some brands have special product that crosses over into the domain of other brands, but as a rule, the brands don’t compete on price or product. For BaselWorld 2011, not all of the Swatch Group brands were ready by press time with information about their newest releases. Here are the newest watches from those brands that did.

BLANCPAIN
The Blancpain manufacture began the re-interpretation of its Villeret collection last year and continues with the exclusive presentation of its first Half-Hour Time Zone watch. This enables travellers to countries like India or Venezuela, where there is a half-hour time zone, to be as punctual as anywhere else! A complicated accomplishment, to be sure, this timepiece is still quite simple to use as all the adjustments are made via the crown. The reference time is given at 12 o’clock and its day/night indicator at nine, and the half-hour time zone and the seconds in the centre. The date changes with the second time and the date change or time zone indicator is shown at four. Travelling has never been easier! 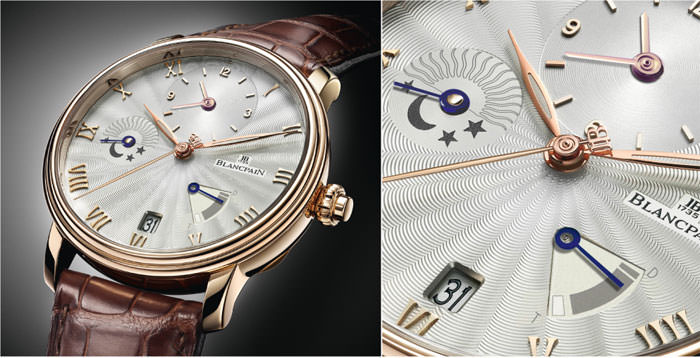 BREGUET
For the 50th anniversary of the first delivery in 1960 of the famed Type XX watch to the French naval air force, which this year is celebrating its first century of service, Breguet is introducing a contemporary, technically updated reinterpretation of that legendary chronograph, the Type XXII design. Its stainless steel case, 44 mm across, houses a Breguet chronograph movement with silicon escapement and flat balance spring whose frequency has been raised to 10 Hertz (i.e. 72,000 vibrations per hour), endowing the movement with exceptional regulating power. The chronograph seconds hand makes a complete rotation in 30 seconds. The timepiece’s start function and readout are thus twice as precise. At the heart of this technical breakthrough is the use of silicon, resulting in more lightweight components and the avoidance of the lubrication problems generated by high frequencies. An extra hand at the centre counts the minutes with the minutes graduation in the form of dashes – one red and the other white – situated on the flange, combined with the numbered seconds graduation also appearing in red and white, serves to establish whether the chronograph counter is in its first (red sectors) or second (white sectors) 30-second revolution. The Breguet Type XXII chronograph features a flyback function, allowing the totaliser to be returned to zero and instantly restarted with a single pusher activation.
Furthermore, the dial includes a second time-zone indicator along with an aperture for the date calendar. A two-position crown resets the second time-zone by moving the hour hand at centre without affecting the minute hand. With the crown in that position, the date calendar obeys the time of the main time-zone displayed at centre. A 24-hour night-and-day indicator at three o’clock tells the wearer whether it is daytime or nighttime in the area covered by the second time-zone. At nine o’clock, a subdial showing the running seconds, making full rotations in 30 seconds, completes this truly exceptional timepiece. The chronograph’s black dial contrasts crisply with the flyback indications in red. The model comes fitted with an integrated calfskin strap.
In addition, building on the success enjoyed at its launch in 2009, the Manufacture Breguet is offering a re-edition of its Classique 7337 this year, perfectly embodying the values of the company: elegance, refinement, timelessness and technical innovation. The brand’s distinctive off-centred chapter ring and small seconds at five o’clock lend the customary asymmetrical touch. Exactly like on the historical watch N° 3833, the day and date indication appear on either side of the phases and age of the moon indications, at the top of the off-centred chapter ring. 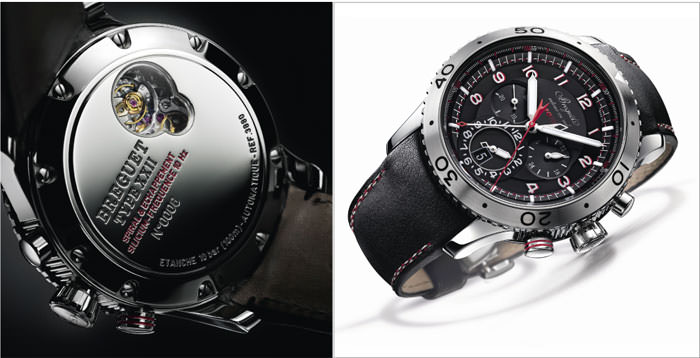