Located only a few metres away from each other, they are both influential and extravagant in a conservative territory: one caters to hipsters and the avant-garde, the other to independent watchmaking connoisseurs. A combined visit of the two distinct worlds of Colette and Chronopassion.

Paris, Rue Saint Honoré. Amongst multiple traditional luxury boutiques and two steps away from the Louvre are two watchmaking UFOs. The first, at number 213: Colette, a meeting point for all the hipsters on the planet, a place where thick beards don’t sound the alarms set by the terrorist watch. Founded 18 years ago by Colette Rousseaux, with a price range going from Nixon to Corum, meaning from $100 to $60,000, the boutique has recently become popular by being one of the very few places around the world to be selected to present and sell the Apple Watch at its early launch. It shows the intention of the Cupertino brand to win the favours of this ‘trend setter’. The second, located a little further up the street, at number 271, is the hiding place of the flamboyant and larger than life Laurent Picciotto. Here, the owner is also very hard to please, with a selection of the best independent brands that appeared during the golden 2000s: Richard Mille, Greubel Forsey, MB&F, Urwerk, HYT, Ressence… A constellation that has granted Laurent Picciotto the exceptional title of ‘opinion maker’. His strong character sparks admiration, sometimes also suspicion; his taunting ways don’t always fit in with the prudent Swiss watchmaking world… Right next door we find the Parisian Hublot store, also managed by Laurent Picciotto.

COLETTE AND APPLE, AN ENCOUNTER 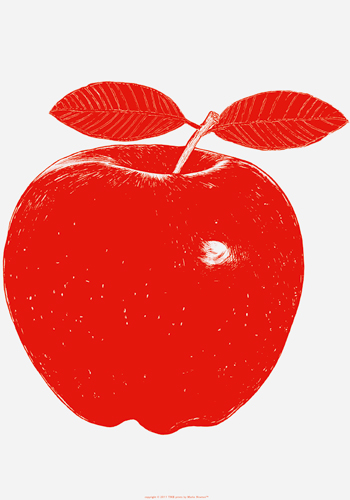 2015 THE prints by Marke NewtonTM

Back at number 213 we are watching them get ready to open the boutique at quite a late hour – 11 a.m. We are sitting in the basement of the shop, at the very trendy Water Bar that regularly hosts preview presentations for the brands. To preserve the mystique around this modern hipster bazaar that currently employs 120 people, Colette Rousseaux almost never gives any interviews, and neither does her daughter Sarah Andelman, who is the co-owner of the shop.After stashing away his fixie bike featuring external speakers, Guillaume Salmon joins us. The spokesperson for the boutique, that sells a lot more than watches (old records, clothes, magazines, even works of art on the upper floor), is not wearing a watch: “But I’ve tested the Apple Watch, and it’s won me over,” he says. “It’s very easy to adjust around your wrist. Texting works really well, too. And the watch looks great, but I still have to study it to use it to its full capacity.”How did a partnership with the wealthiest company in the world come about? “They contacted us. They invited Sarah to go to Cupertino for a presentation last year. The next logical step was to sell the model in our store right when it launched for a few select boutiques. It wasn’t easy at first, and we had to face a much larger clientele than usual. The irony was that we had Apple Watches, but the Apple Stores near us did not.” Meanwhile, the Apple Stores now have the watch too, and sales have slowed down somewhat. “But we continue to sell various models every day. The Sports model is the most popular one.”

“Whatever the price or notoriety of the brand, Colette is most interested in the quality of the design, in exclusive and limited edition products.” 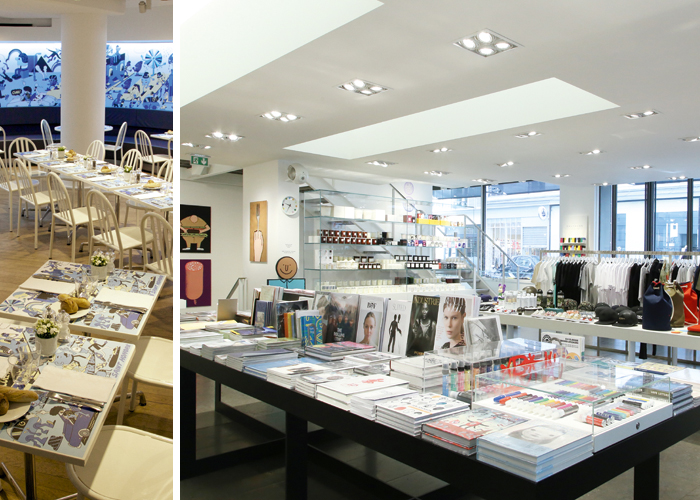 The Parisian store’s worst nightmare – which is also a paradox, considering the mass distribution of Apple products – is to fall into mainstream culture. Guillaume Salmon explains that “whatever the price or notoriety of the brand, Colette is most interested in the quality of the design, in exclusive and limited edition products.” Sarah Andelman personally handles the selection: “We only work with what we really love. And it happens regularly that we fall in love with a piece: we change our watch windows weekly. We don’t have a lot of products in stock, but we want our clients to see something special every time they visit us.” Certain brands are aware of this and come up with special “Colette” series …With the boom of watchmaking in the past ten years, watches have made their way into the windows of the shop. Who buys them? “We can compare our clients to the readers of the comic book Tintin: they are between 7 and 77 years old, they are from Paris as well as Australia, they are wealthy or come from more modest backgrounds. The special feature of watchmaking, compared to the other products we offer, is that it attracts mainly men. We are lucky enough to have clients who are interested in watchmaking, but whose main concern is not the price.”How exactly did Colette become a global trendsetter? What makes it different from others? “Some of it is still a mystery – and we owe a lot to luck! We came to the right place at the right time. Eighteen years ago the neighbourhood was not quite as chic. I think that the artistic choices made by Colette and Sarah bore fruit in a rather conservative context. They have always done their best to surprise people.” The store sees itself as an experiment, as an ‘open’ place. Can this success be reproduced in other places around the world? The answer is clear: “No, Colette must remain unique.”

LAURENT PICCIOTTO, REBEL WITH A CAUSE 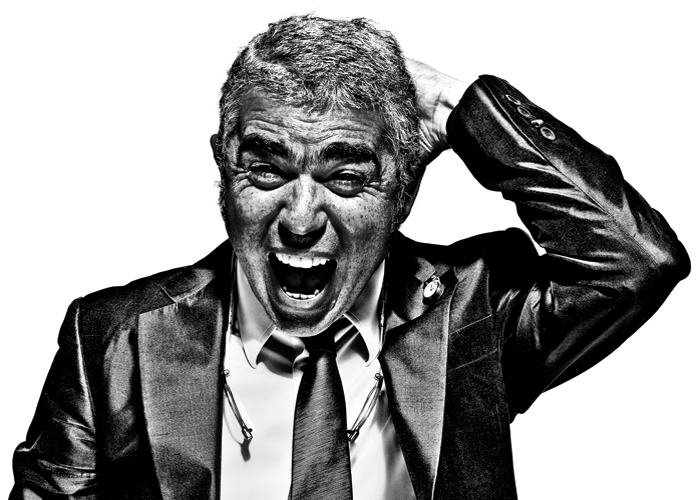 On our way out of Colette we continue our stroll on Rue Saint Honoré and walk past many luxury brand stores before stopping at a small ordinary-looking shop. We walk in and go down a small flight of stairs to enter the owner’s office; it is covered in posters and references to rock music and motorcycles. Welcome to the magical cave of Laurent Picciotto, founder of Chronopassion. A face, a voice, an attitude… Not a regular retailer!“I started in 1988, a time where no real market or real boutique in Paris was exclusively devoted to watches. The norm was buying the occasional watch from a jeweller. The margins weren’t good, the clients were old and the watches were complicated objects that often broke down.”Like Colette, Chronopassion has a distinct enemy: mainstream culture. “Today, we can find roughly the same ten or fifteen watch brands in every shopping street in the world. I always ask myself what a certain brand brings to the table instead of focusing on what sells.”The first years were not kind to Laurent Picciotto or his concept, a boutique devoted exclusively to watchmaking at the heart of the French capital. “I opened a little too early. At first, I had around 1.2 client per day!” This was before the new economy bloomed, with its cohort of young people who could afford to spend a million francs on a watch.Between 1995 and 2000, external actors began to buy watch brands. “We saw a financial ‘wave’ that went over Switzerland and its slipper-wearing watchmakers, who paused every fifteen minutes and silently created wonderful objects. Everyone started to buy everyone else.” Since the year 2000 the frenzy has transformed into real ‘madness’.

“My approach is unreasonable, but my management is reasonable. I’m an emotional and compulsive buyer. I bet on my favourites, but I can’t lose one bet out of three.”

BETS AND LOVE AT FIRST SIGHT

In Chronopassion’s window today we find the most successful brands of the 2000s and more: Hublot, Audemars Piguet, Richard Mille, Panerai… What are Laurent Picciotto’s selection criteria? “My main concern isn’t selling expensive watches. I go further than simplistic thinking. I want the models to be innovative, confidential, and unique. In a nutshell, I would say that my approach is unreasonable, but my management is reasonable. I’m an emotional and compulsive buyer. I bet on my favourites, but I can’t lose one bet out of three.”Last year at Baselworld Laurent Picciotto fell in love with the HM6 by MB&F: “It’s Max Büsser’s craziest piece, I bought two and sold four! It’s important to find balance between the brands that produce a certain volume, like Breguet or Hublot, and brands that are much more confidential: we don’t know how many Sarpaneva watches we’ll sell, and he only makes 40 each year!”Amongst his favourites we find the young Fiona Krüger. “She grabbed me by the arm one day at Baselworld and told me she had no margins for the retailers… I took the risk regardless!” Another newcomer at Chronopassion is Christophe Claret. “I didn’t understand his position for a long time: was he a subcontractor for other brands or a brand? But with the Margot he conquered the heart of women with the complications that so often attract men and frighten women.” 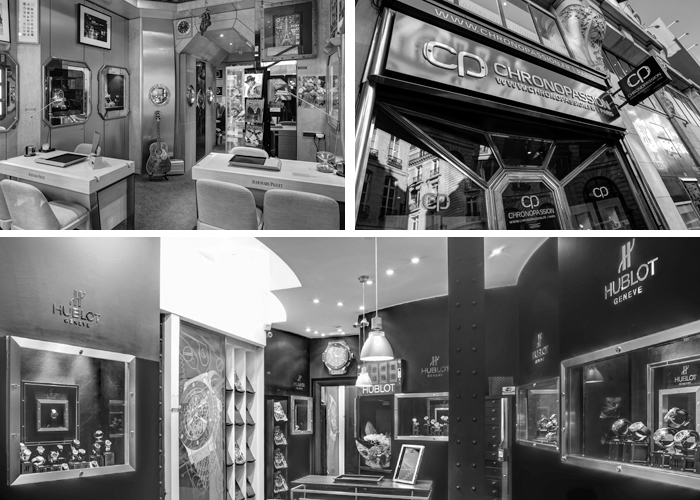 Chronopassion with, right next door, the Parisian Hublot store.

Laurent Picciotto falls in love, and at the same time if he’s unhappy, he’ll let you know. One of his most memorable tirades happened during a press conference by Nicolas Hayek Sr. when Breguet announced a birthday tourbillon watch whose margins had been reduced by half for the retailers. The Frenchman still represents the Swatch Group brand but others, he has abandoned. “The 1990 IWC, with its black and white advertisements from the time of the Da Vinci model, has nothing to do with the current brand. Likewise, excessive creativity can be a problem when it’s not channelled. I liked the rigour of Jaeger-LeCoultre, before the brand decided to make diving models, jewellery, classic watches and low-cost complications.”85% of Chronopassion’s clientele is foreign, in a market that is much calmer today than it was during the madness of the 2000s. Laurent Picciotto remembers it with slight nostalgia: “With Richard Mille, we spent hours in this basement talking about the RM 001. We didn’t think about how much it would cost, all we cared about was giving it our all. Richard Mille practically invented the unreasonable price!”Since then, third parties actors have profited from it. “There was a form of pollution and inflation: between 2000 and 2008 newcomers could practically launch any model with any price and make it work. Once someone came to see me in Baselworld with a new watch that cost CHF 300,000. I wasn’t convinced, and I think he wasn’t either. But he said to me: ‘I don’t care, it sells’. It was piracy. Many have disappeared, but our memory is selective, we forget them.”Today the market has returned to a sort of normality. But it is out of the question for Laurent Picciotto to go back to normal. “In 2008, when everyone was slamming the brakes on, I bought double. I give myself the means to do it and I don’t care about the trends.”