The Front Tells the Time – The Back Tells the Story In its 30th year, Swatch stopped the watch world once again, this time with SISTEM51. The first mechanical movement ever made on a fully-automated assembly line, SISTEM51 packs unprecedented technological innovation into an automatic movement with only 51 parts. 100 percent Swiss-made, the first four models were launched exclusively in Switzerland in week 51. 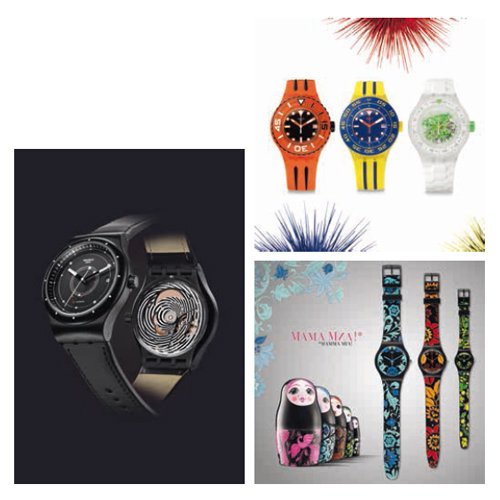 Key Collections 2013 The innovative spirit that swept through Swatch in 2013 brought bright colors and creative designs in the Spring Summer collection and trending themes and variations to Fall Winter: colors, patterns, textures and shapes that captured culture emerging from the streets. The New Irony Chrono collection launched in May took up the pioneering Swatch tradition of high-performance timekeeping set in steel. Nine debut models exhibit clear, essential design and split-second accuracy in a big new format that speaks of performance with casual style. In June, Swatch surfaced with Scuba Libre, the new collection designed for urban sea-lovers and nautical sports enthusiasts. Its launch was accompanied by a spectacular TV commercial shot in South Africa with a soundtrack from British pop singer and Swatch partner, Mika.

Trends In 2013, Omega demonstrated its continuing commitment to meeting horology’s greatest challenges. It launched the Co-Axial caliber 8508, the world’s first truly anti-magnetic mechanical watch movement, solving a problem that had perplexed watchmakers for centuries. The groundbreaking technology was introduced at several press events scheduled in all major markets. The year was characterized by innovation, both inside the watch and out, and included the presentation of 18K Sedna gold, a patented alloy whose red gold color is particularly enduring. Omega’s exclusive Co-Axial technology was again the cornerstone of the brand’s product strategy. An award-winning advertising campaign was complemented by Co-Axial exhibitions in cities around the world. 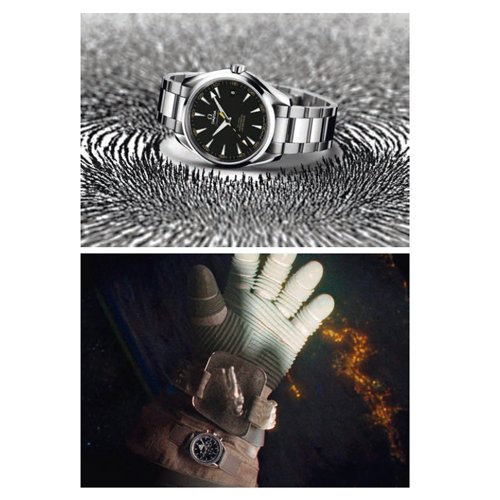 Other high-profile events and partnerships generated positive media coverage throughout the year. The Omega-produced documentary, Planet Ocean, was screened in more than a dozen cities and at the United Nations in the presence of Secretary General Ban Ki-moon, underscoring the brand’s advocacy of oceanic health. Links with golf, swimming, sailing and athletics added to a consistently strong press presence in the world of sport. Omega again expanded its global network of monobrand boutiques. More than 300 Omega Boutiques are now located at the world’s best shopping addresses.

Trends In 2013, Longines continued to achieve market growth and increased its support for the world of equestrian sports through several partnerships. The Conquest Classic collection, presented at Baselworld, reflects the brand’s passion for the sport in the same way as the chronographs it has produced for racing enthusiasts and jockeys since 1881. 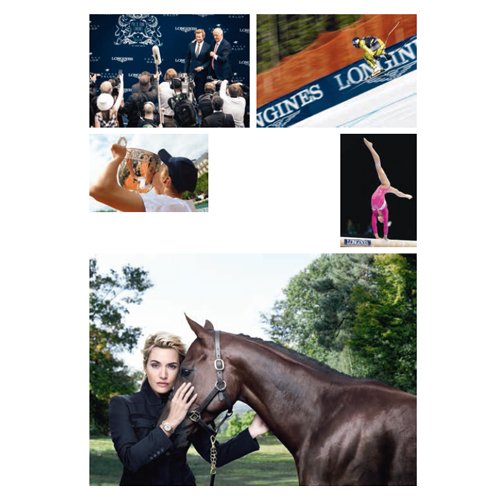 At the beginning of the year, Longines formalized a partnership agreement with the International Equestrian Federation (FEI), becoming the Federation’s first “Top Partner”. Her Royal Highness Princess Haya, President of the FEI, and Nayla Hayek, Chair of the Swatch Group Board of Directors, co-signed the contract at an official ceremony held in Lausanne. Longines thus became the official timekeeper and the official watch brand of the FEI, notably for the Furusiyya FEI Nations Cup, as well as Title Partner of the Longines Rankings and the Longines FEI World Cup Jumping. The brand also gave its name to the Longines Rising Star Award, an FEI Award given to a rider, 14–21 years of age, who has shown exceptional talent and sporting commitment to the world of equestrianism. This year it was awarded to the American rider Reed Kessler. With its slogan “Elegance is an attitude”, Longines continued to support young athletes. In this manner, during Roland-Garros, the Longines Future Tennis Aces tournament enables promising young tennis players to step onto the Parisian clay court. In flat racing, the Prix Longines Future Racing Stars, open to young jockeys, was run in conjunction with the Prix de Diane Longines at Chantilly. In 2013 Longines extended its support to Alpine skiing with the Longines Future Ski Champions, with young skiers taking part in a giant slalom on the official competition course at Val d’Isère.

Trends In 2013 Tissot celebrated its 160th anniversary. Diverse activities around the world showcased the brand’s unique heritage of tradition and innovation, highlighting lots of watchmaking firsts, a relentless pioneering spirit and immense global presence. Dedicated products, events and roadshows brought a dynamic past and present to life for everyone to enjoy. 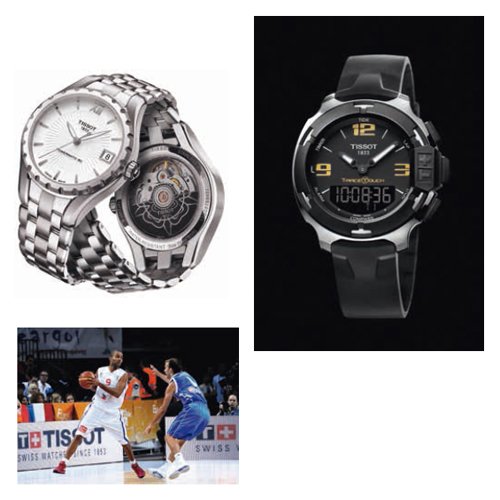 Another year of very positive growth and the biggest worldwide retail network in the Swiss watchmaking industry are clear proof of Tissot’s ongoing success. Visibility at some of the world’s leading sports events is further evidence of the brand’s widespread appeal. A particularly proud moment was the attainment of a first and second place in the famous Concours International de Chronométrie; the first prize was won for the second consecutive time in the classic category. This is the ultimate recognition and confirmation of the quality of Tissot products.

All brands had an auspicious start. In the first month of the year, sales of both watches and jewelry were very good. After four years of strong and dynamic growth by Swatch Group, as well as the entire Swiss watch industry, continued healthy growth is expected in 2014. Thanks to its 20 strong brands and their attractive products, further expansion of the distribution and retail network, the investment made in almost all production areas as well as an extremely healthy equity and financial situation, the Swatch Group is in an excellent position for both the future and for long-term growth. 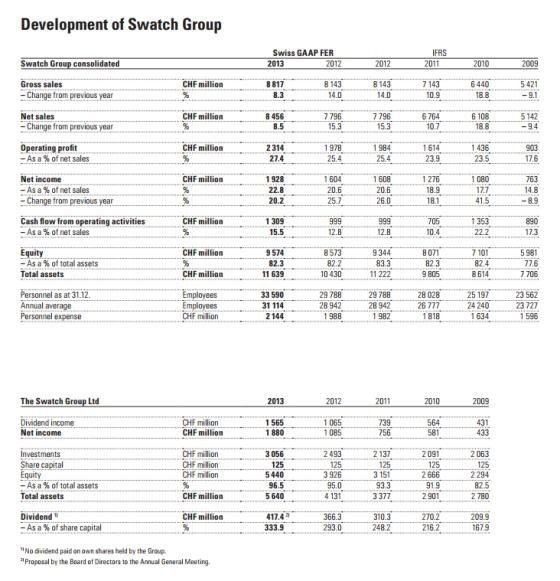 For the full report and financial statements, click HERE